Prime Minister Scott Morrison has announced a royal commission on veteran suicides after a long-running campaign by former soldiers and pressure from his own MPs who voted in the Senate to establish it.

The announcement comes just days after Mr Morrison revealed Australia would remove its final 80 Defence personnel from Afghanistan in September, ending the nation’s longest war after 20 years in the country. 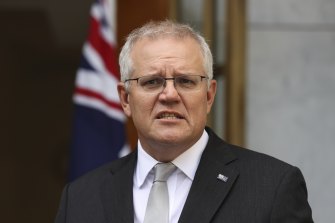 “Every single day the service of our veterans is something that is pressed on my mind,” Mr Morrison said on Monday. “There is a far greater cost that is borne beyond those deployments, and that is the mental toll taken on the veterans after they return. That cost is most significant when we see it in the death by suicide of our veterans.”

Mr Morrison will release draft terms of reference for the royal commission later on Monday. He said it will need the support of state and territory governments, and he will address that at national cabinet on Monday afternoon.

The government proposed the national commission model in February 2020 but has been unable to get the bill through the Senate because crossbenchers including Tasmanian independent Jacqui Lambie, a former soldier, wanted the royal commission.

Senator Lambie and Labor estimate hundreds of former Defence personnel have taken their own lives over several decades.

Mr Morrison said the royal commission would work alongside the new national commissioner.

“The royal commission will look at past deaths by suicide (including suspected suicides and lived experience of suicide risks) from a systemic point of view, while the national commissioner will have a forward-looking role, including overseeing the implementation of the royal commission’s recommendations,” he said.

“Today is a long time coming for veterans and their families. Finally, the voices of veterans will be heard. Finally, families can stand up and share their stories,” Ms Finney said. “Today, I urge the Prime Minister to ensure that the voices of veterans are front and centre in this royal commission. We cannot have the organisations at the centre of a broken system leading this investigation.”

In March, Liberal National Party MP Phillip Thompson, who served in the army, addressed the public gallery to say “I’m sorry” for the pain suffered by families whose children had taken their own lives after their service.

“Every day I hear more of people I know, of people at my level, at the private level, who have died,” Mr Thompson said. “When I was on operations in Afghanistan we accepted death. I didn’t expect it when I came home. I didn’t think I would be going to funerals all the time.”

“I spent years in that dark hole. My wife pulled me out of that hole – and some good friends who gave me a clip around the ear. The hole was so dark it felt like there was nothing else.”

While the government named Dr Bernadette Boss as the interim national commissioner for Defence and Veteran Suicide Prevention last year, it has not been able to legislate her powers.

The government anticipates three commissioners will be needed to deal with the volume of testimonies the royal commission is likely to hear.

In March, the Senate unanimously passed a motion calling on Mr Morrison to establish the royal commission, setting up the prospect that the Prime Minister could lose a similar vote in the lower house.

A number of Coalition backbenchers indicated they were prepared to cross the floor to vote for the motion, so the House of Representatives instead formally endorsed the call and the government said it would act on it.