It’s #CaterpillarWars! Twitter users get in on the fun after Aldi mocks M&S’ legal bid to protect Colin the Caterpillar cake – joking it’s time to ‘bring in Oprah’

Twitter users have gone wild over the news that Marks & Spencer is suing Aldi over a copycat version of their £7 Colin the Caterpillar cake – and shared hilarious memes to poke fun at the decision.

The grocery giant claimed Aldi was ‘riding on the coat-tails’ of its reputation and launched an intellectual property claim with the High Court last week week.

And since the news broke, social media users have rejoiced with #CaterpillarWars and #FreeCuthbert trending. 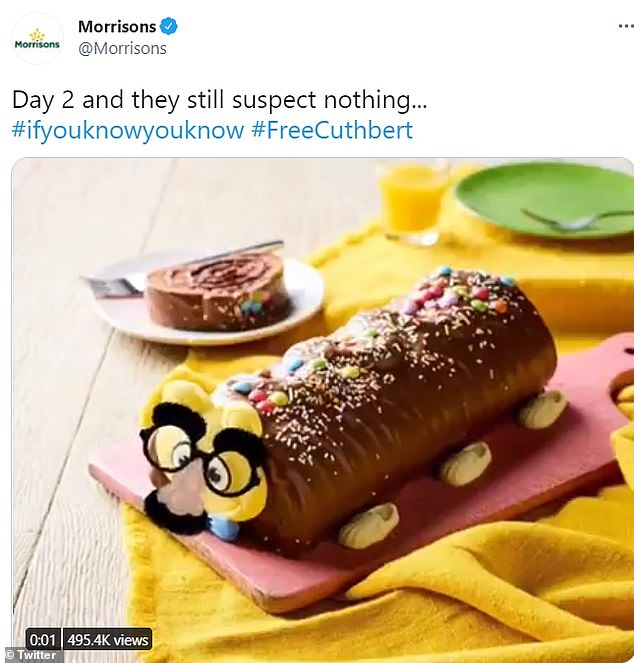 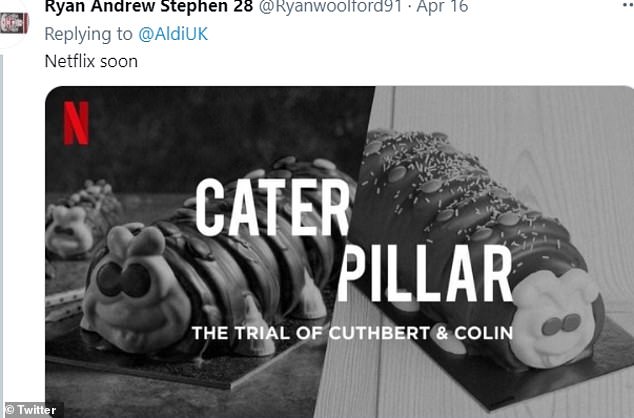 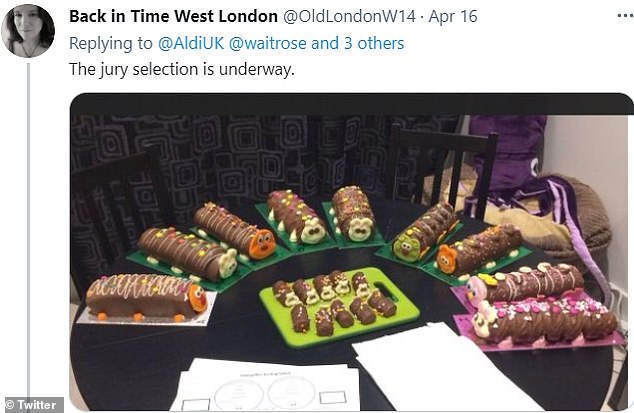 Some have joked other supermarket’s caterpillar cakes – such as Sainsbury’s Wiggles for £6 and Tesco Curly the Caterpillar – will form a jury to help.

Some have joked other supermarket’s caterpillar cakes – such as Sainsbury’s Wiggles for £6 and Tesco Curly the Caterpillar  – will form a jury to help.

Others have used a meme of Oprah made popular by Harry’s and Meghan’s interview, asking the cakes if they were ‘silent or silenced’.

Some even joked the cakes will appear on the now defunct Jeremy Kyle show to resolve their issues.

M&S has argued the similarity of Aldi’s £4.99 Cuthbert the Caterpillar cake to its product misleads consumers, who might think they are of the same standard. 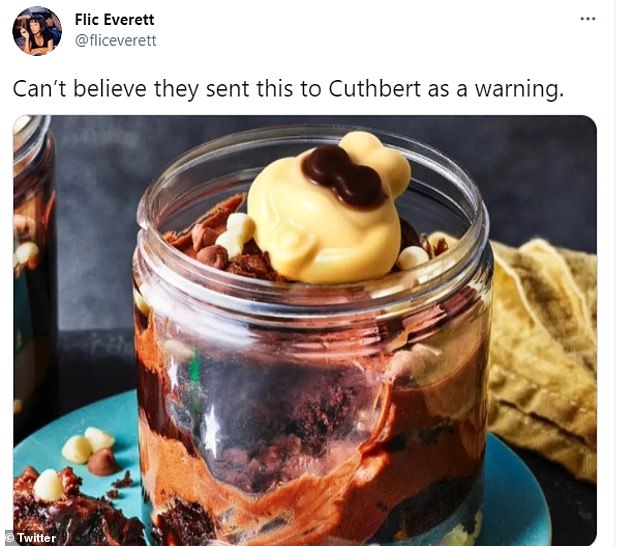 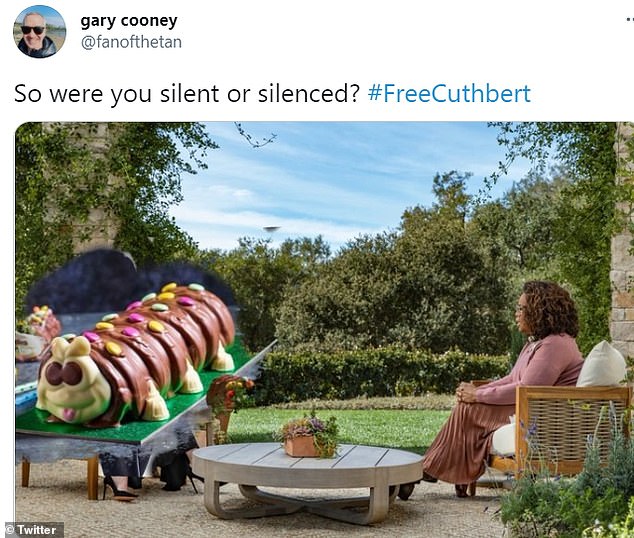 Others have used the meme made popular by Harry’s and Meghan’s Oprah interview, asking the cakes if they were ‘silent or silenced’

Aldi have also got in on the action, in a series of Twitter posts, the German discounter joking online that they were planning to pitch a ten-part documentary to Netflix with the title ‘Making a Caterpillar’, a reference to the popular series Making a Murderer.

In another post, they shared an image of their rival product with prison bars over the front of it. Above the image they wrote: ‘Packaging update’.

They also mocked M&S’s name by calling it ‘Marks & Snitches’ and jokingly referred to its famous advertising tagline by adding: ‘This is not just any court case, this is…’. 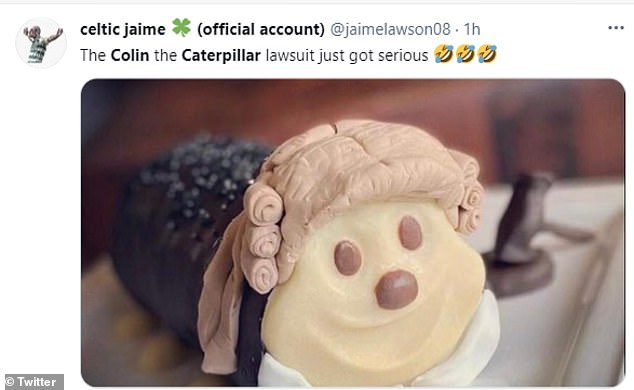 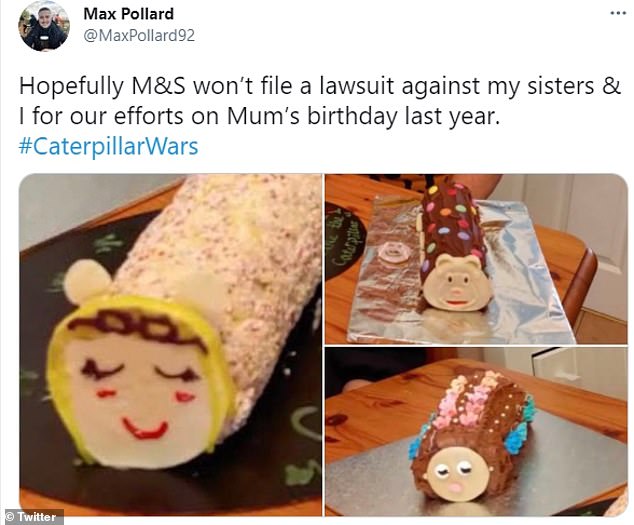 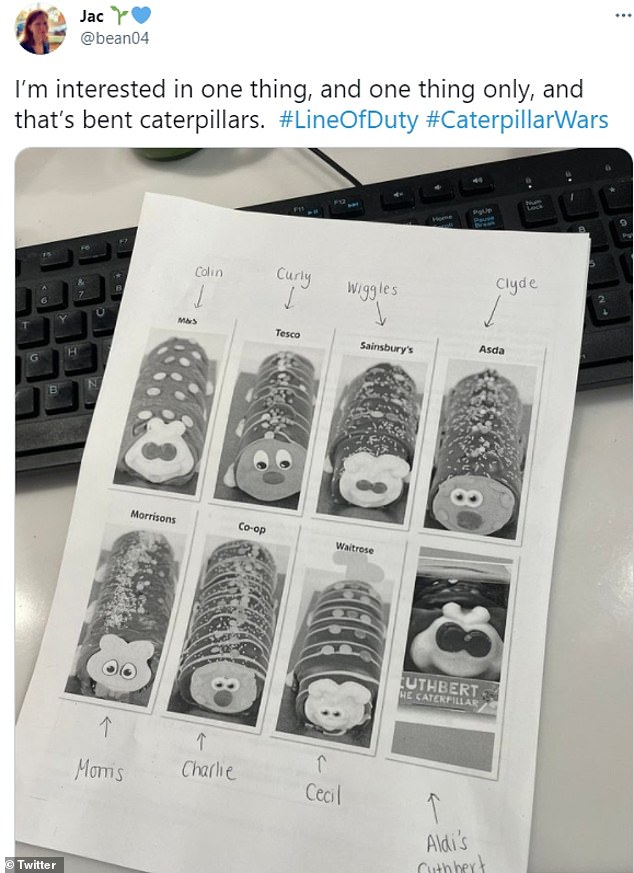 Topical: One social media compared the saga to Line of Duty saying they were interested in ‘catching bent caterpillars’

M&S only launched their legal action against ALDI, but other supermarkets also carry similar products on their shelves.

Sainsbury’s sells a caterpillar cake called Wiggles for £6 and Tesco features Curly the Caterpillar for the same price.

Despite this, M&S wants Aldi to remove the cake from sale as well as agree not to sell anything similar in the future.

They also referenced their other rivals’ versions by adding: ‘Cecil, Wiggles, Curly, Clyde. We got you.’

Another post showed a jokey court sketch of Cuthbert the Caterpillar flanked by guards, along with a hash tag of ‘FreeCuthbert’. 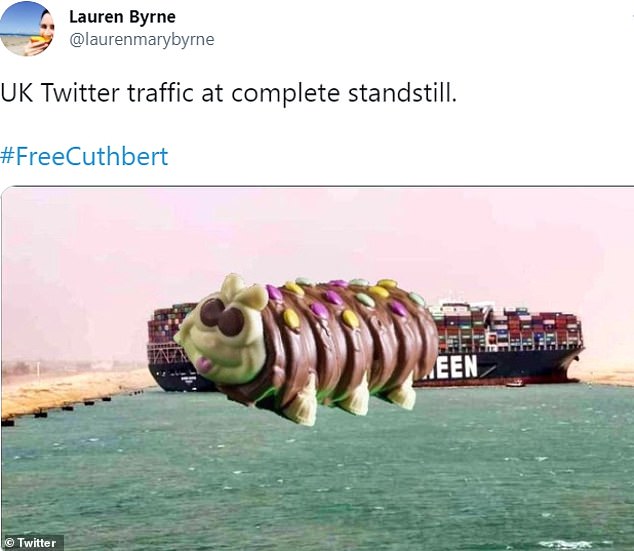 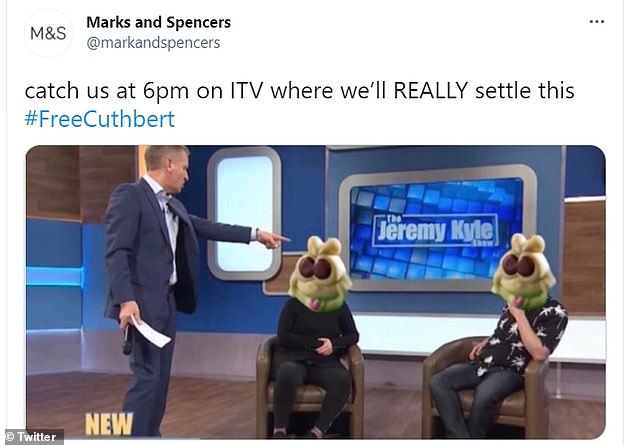 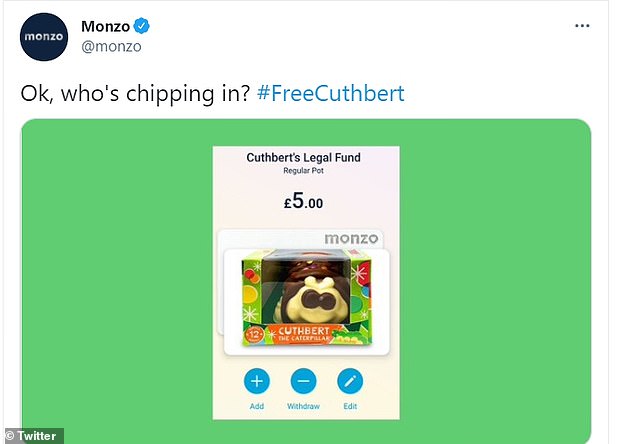 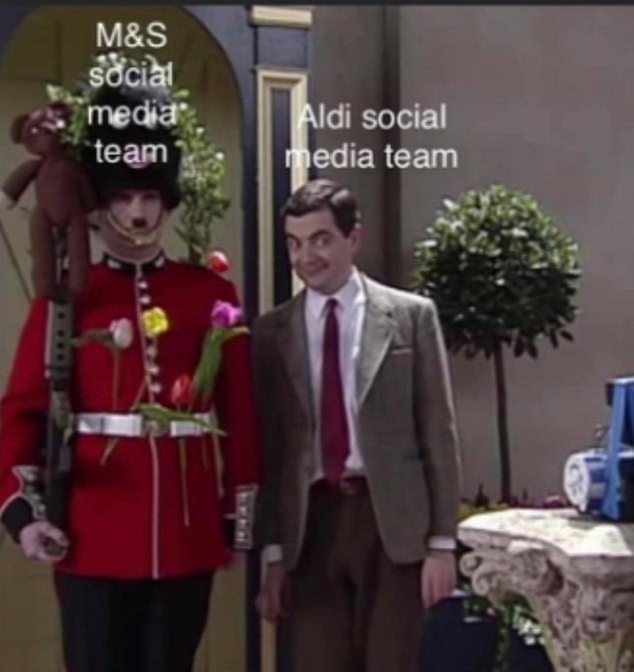 The British High Street favourite launched Colin the Caterpillar around 30 years ago and his appearance has been substantially unchanged since around 2004, except for adaptations for events such as Halloween and Christmas, and related products such as Connie the Caterpillar.

They also sell a gummy sweet version of Colin Caterpillars.

Meanwhile, reports of the Cuthbert the Caterpillar version first emerged in 2019. 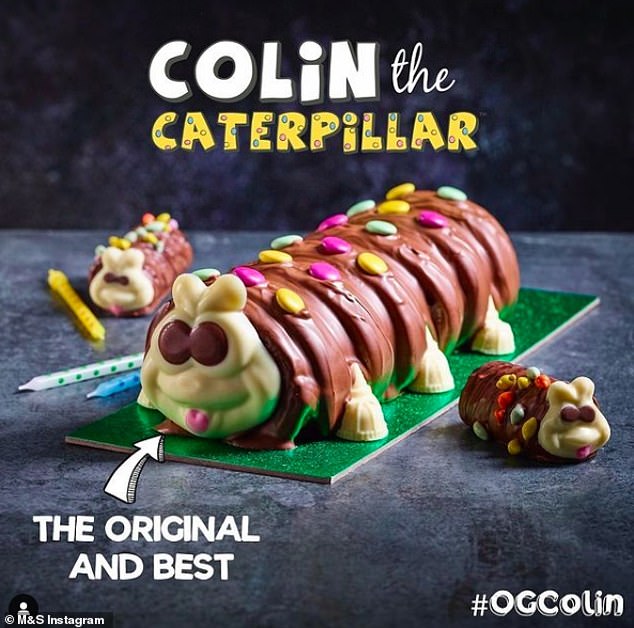 Earlier this week, M&S took to Instagram with an image of the signature cake which was annotated with the slogan: ‘The original and the best’

Two years ago M&S responded to a customer’s Tweet about Aldi’s cake with a picture of spiderman and the comment: ‘Hmm, my spidey senses are tingling… we definitely spot an impostor.’

The product is central to M&S’s partnership with cancer charity Macmillan, and the retailer has created a Colin product for the annual World’s Biggest Coffee Morning fundraising event.

The cake is a sponge with milk chocolate and buttercream, topped with chocolate sweets and a smiling white chocolate face.

M&S has three trademarks relating to Colin, which the retailer believes means Colin has acquired and retains an enhanced distinctive character and reputation.

Colin’s Mini Faces quickly became one of the bestselling confectionery lines at M&S Food after the retailer launched them to celebrate their 30th anniversary last August.

Identical to the cake, Colin’s face is made of solid, creamy white chocolate with milk chocolate eyes.

Colin has also been central to Marks & Spencer’s marketing campaign, and they’ve  delighted fans with a series of TikTok videos, which sees Percy Pig and Colin the Caterpillar reenact a famous love scenes. 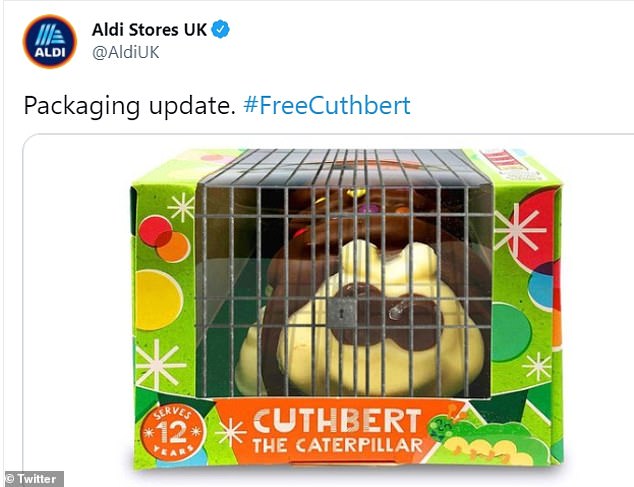 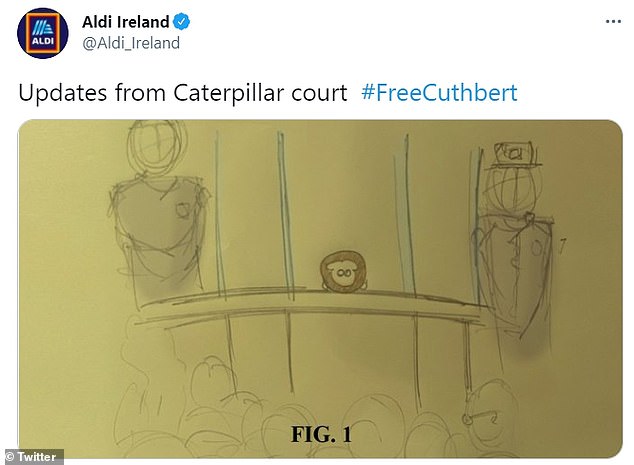 Twitter users have laughed off the news Marks & Spencer is suing Aldi over a copycat version of their £7 Colin the Caterpillar cake, with Aldi themselves writing a series of tweets last week