The three most marginal government-held seats in Western Australia were the biggest recipients of grants handed out across Perth in the lead-up to the 2019 federal election, yet some promises are still years away from being delivered to voters.

A breakdown of 11 grants schemes over which either MPs or ministers have direct control shows that over the past three years, Liberal electorates were heavily favoured with major and minor projects. 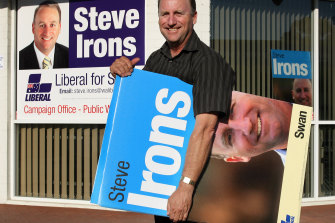 Swan, Pearce and Hasluck, which, ahead of the 2019 election, Labor had hopes of capturing, benefited most.

Swan, held by Liberal Steve Irons, won almost $49 million in grants – the largest amount for any metropolitan seat in Australia.

Mr Irons was on hand when Prime Minister Scott Morrison announced $16.25 million towards a new centre for WA soccer. The decision was revealed just days out from the 2019 election.

The voters of Swan were also pledged $20 million, under a program that was promised to provide female facilities and water safety projects, for the proposed South Perth Recreation and Aquatic Facility.

This year, the local council is still on the hunt for extra funding for the project. Concept and schematic designs are not expected to be started until early next year.

Mr Irons survived a small swing against him at the 2019 election, holding Swan by 2.7 per cent.

The seat sits almost in the centre of Perth. Across the Swan River is Labor-held Perth.

Its socio-economic background is similar to Swan, but the similarity does not extend to how much money was channelled into the electorate over the past three years. It is also home to Beatty Park, where swimming at the 1962 British Empire and Commonwealth Games was held and which requires an upgrade.

On the coast, Fremantle is a safe Labor seat. The last time it was held by a party other than Labor was during the Great Depression in the 1930s before it was reclaimed by ALP leader John Curtin.

Over the past three years, Fremantle has received $916,000 in grants, the least of any electorate in WA.

One of the best looked after Labor seats was Cowan. The most marginal electorate in the state, Anne Aly retained it by just 1400 votes at the 2019 poll.

While Cowan received $9.7 million in grants, that was inflated by a $5 million promise under the female facilities and water safety program. The project is for the Wanneroo council area that was in Cowan until an electorate boundary redistribution this year. It now sits on the boundary of the Liberal-held seats of Pearce and Moore.

Pearce is held by former attorney-general Christian Porter. It received $33.9 million in grants over the past three years.

Announcing his retirement from politics this month, Mr Porter highlighted his ability to win financial support for projects within his electorate of Pearce.

“Since 2013, I have been dedicated to securing critical funding for projects that had been long neglected and would improve the lives of people in our local community,” he said.

He noted more than $1 billion for rail lines to key parts of the electorate, a major road project plus a swimming pool in the town of Northam and a “sport and recreation precinct” in the even smaller town of Toodyay.

Missing was a $14,000 grant to a golf club that charges $2000 a year in membership fees, so it could build an amenities block to “provide a hygienic and accessible facility for community use”, a $350,000 skate park for the town of York, which has a population of 2500, and $5000 to help restore a “heritage train” at the Old Northam railway station museum that is open to the public four hours a day.

Fellow frontbencher Ken Wyatt holds the marginal seat of Hasluck. It received $32 million in assistance over the period, including $7500 for the Midland Junction Poultry Society to extend its shed in a development that was claimed to “encourage more participation from members plus poultry exhibitors promoting the hobby to the wider community”.