The Duke of Cambridge looked smart as he arrived at Kensington palace for Child Bereavement UK’s 25th birthday gala dinner and gave a speech to high profile guests and families helped by the charity.

Prince William, 36, is a royal patron of the charity and the dinner tonight will honour its work helping families to rebuild their lives after the devastation of child bereavement.

The Duke, who became a patron of the charity 10 years ago, also made a speech and revealed how meeting the veterans and families of the D-Day landings last week showed him support for mental health is needed for life. 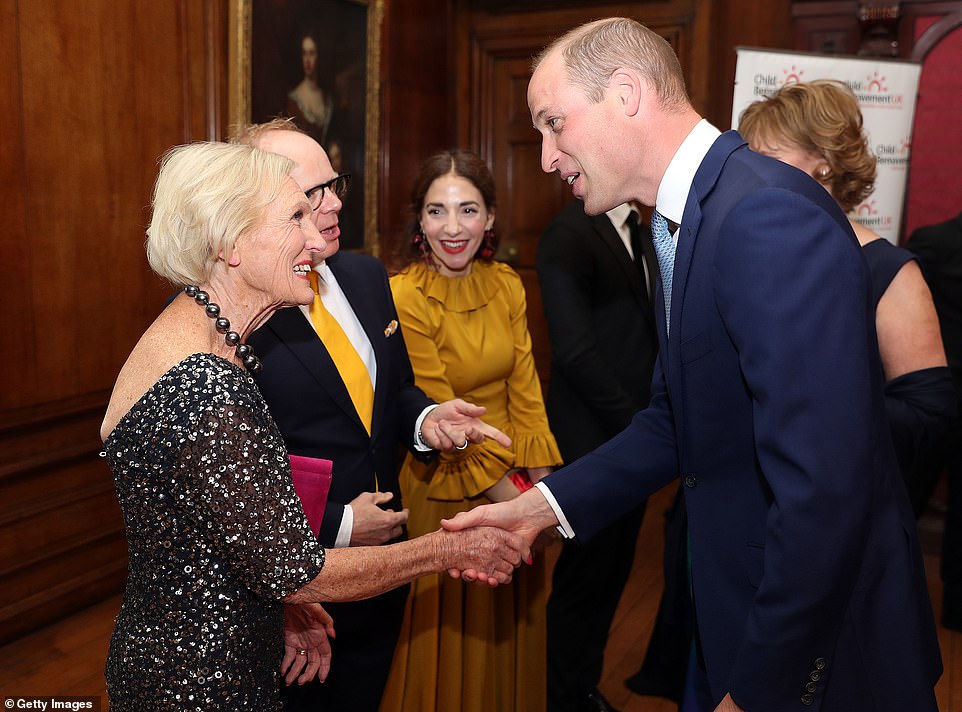 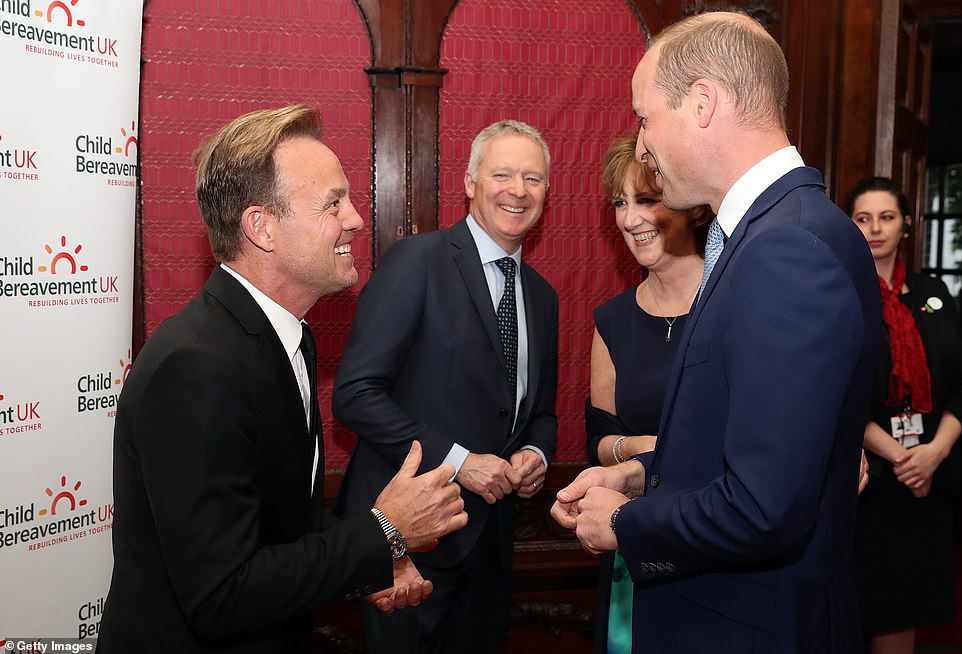 Prince William, who is the royal patron of the charity, also met comedian Rory Bremner, middle, and actor Jason Donovan, left, at the event this evening. Also pictured next to William is Chief Executive of Child Bereavement UK Ann Chalmers 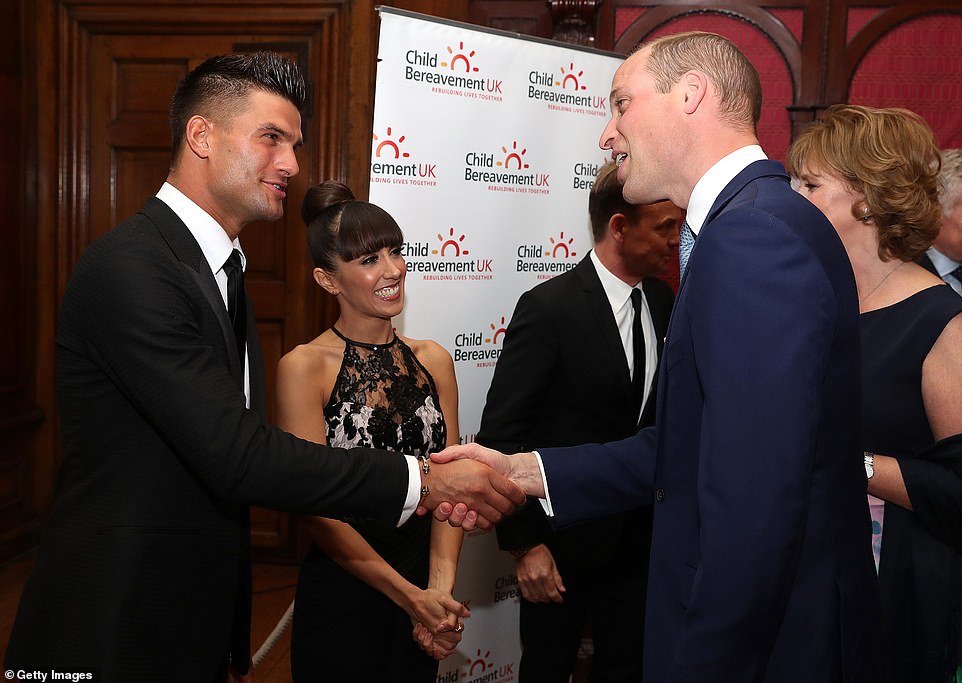 The royal, right, was all smiles as he shook hands with Strictly dancer Alja Korjanec, left, and met Janette Manrara, middle

Speaking to parents who have suffered the heartache of losing a child, William said communication is key to help people ‘navigate the difficult path of grief’.

The Duke said: ‘Grief that is most intense in the days and weeks that directly follow a loss.

‘Like those affected by intense and unimaginable heartache after the devastating mosque attacks in Christchurch, New Zealand, in March.

‘And grief that is carried with you for the rest of your life. I saw that again in the eyes of D-Day veterans and families last week.

‘Their sorrow for lost friends, sons and fathers 75 years on still moves them to tears. It demonstrates exactly why Child Bereavement UK’s work is so important.

‘An ear to listen, and a shoulder to cry on, is sometimes all it takes to lighten the burden in the smallest of ways. And that is what you have provided.’ 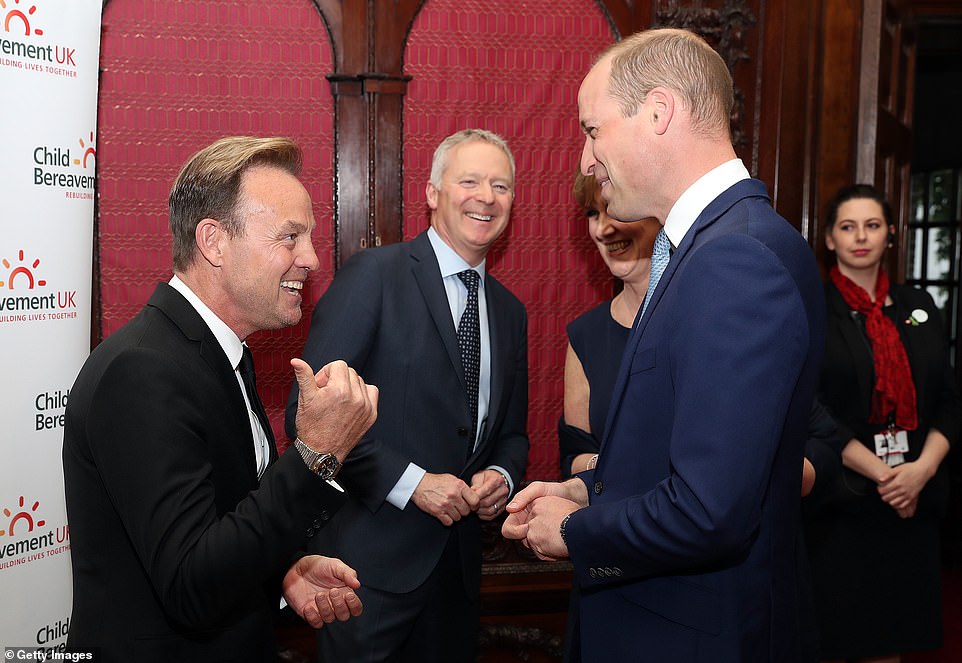 Jason Donovan, left, appeared to crack a joke and made Prince William and Scottish impressionist Rory Bremner laugh while they were at the Child Bereavement UK event tonight 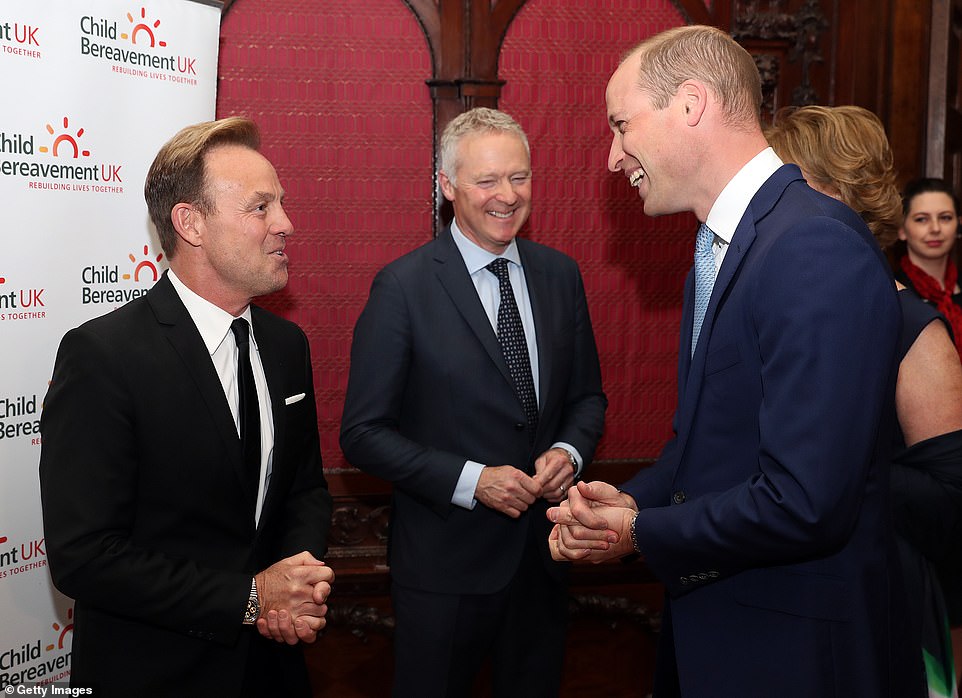 Prince William, right, clasped his hands and was all smiles as he met with Jason Donovan and Rory Bremner this evening

The Duke of Cambridge spoke of his pride in representing the charity that started a quarter of a century ago when his mother’s friend Julia Samuel came up with the idea when visiting the late Princess of Wales at Kensington Palace.

Mrs Samuel is still close friends with the royals and is Prince George’s godmother.

He said: ‘On the eve of Child Bereavement UK’s creation in 1994, an unusually apprehensive and nervous Julia Samuel travelled here to Kensington Palace to go through her opening speech with my mother.

‘They both saw then the game changer this charity could be for those in the darkest depths of grief, struggling to find a route out.

‘Twenty five years later, it is with great pride that I stand here as your patron to celebrate the successes you have had since that day. 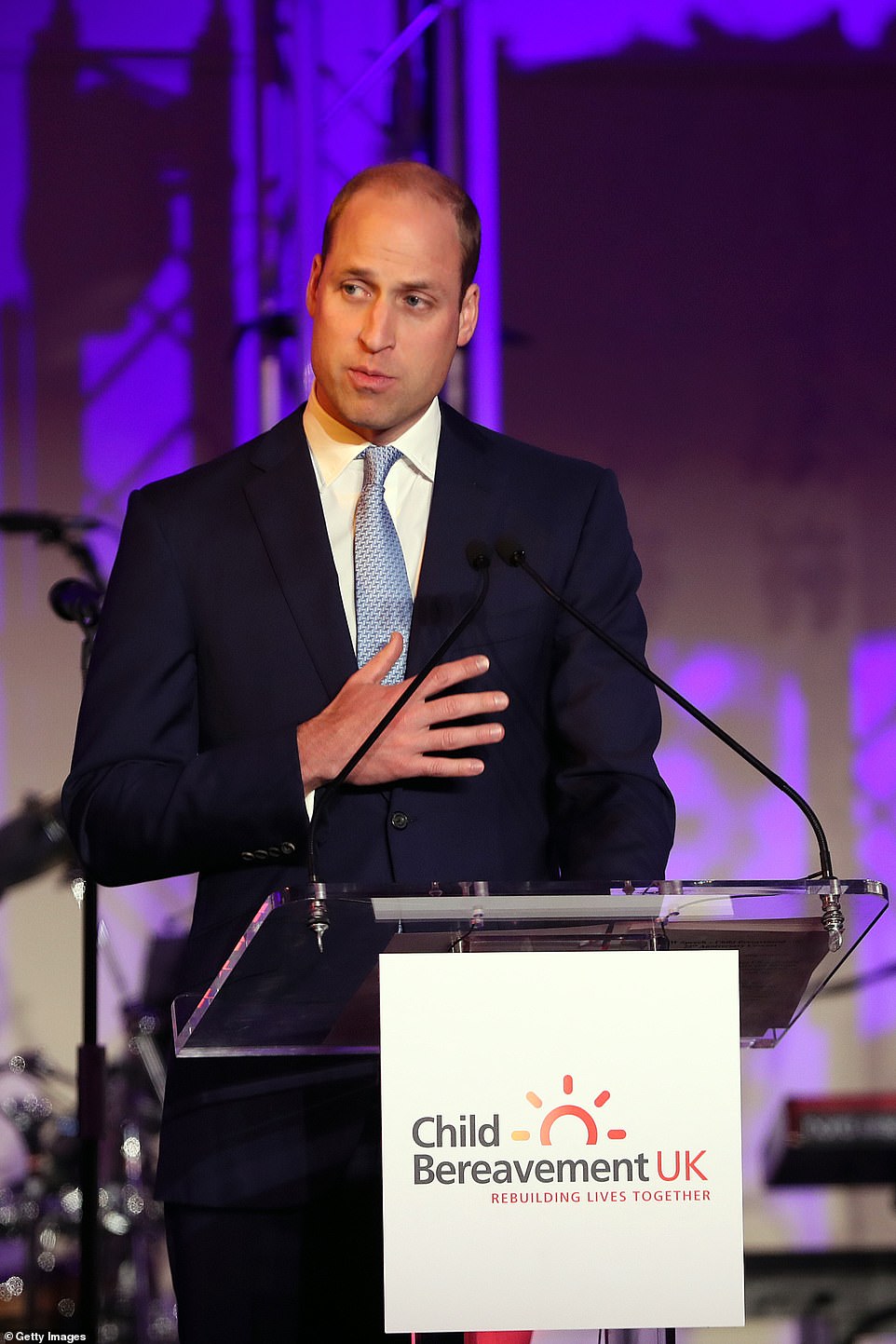 Prince William, pictured, gave a speech at the Child Bereavement 25th birthday gala dinner and also met with families who have been helped by the charity over the past two decades 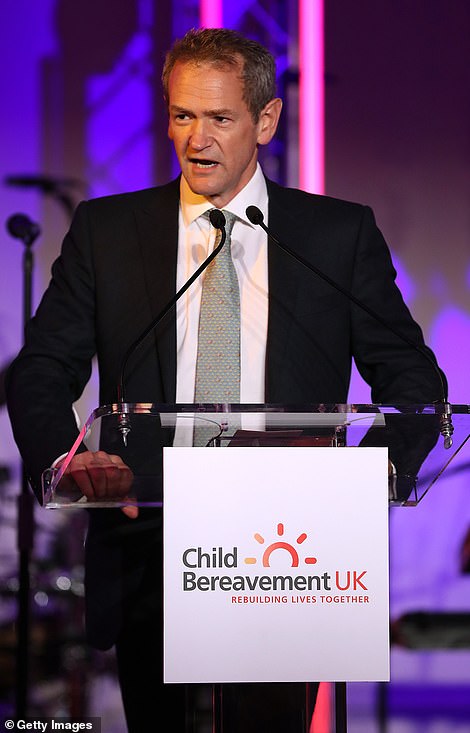 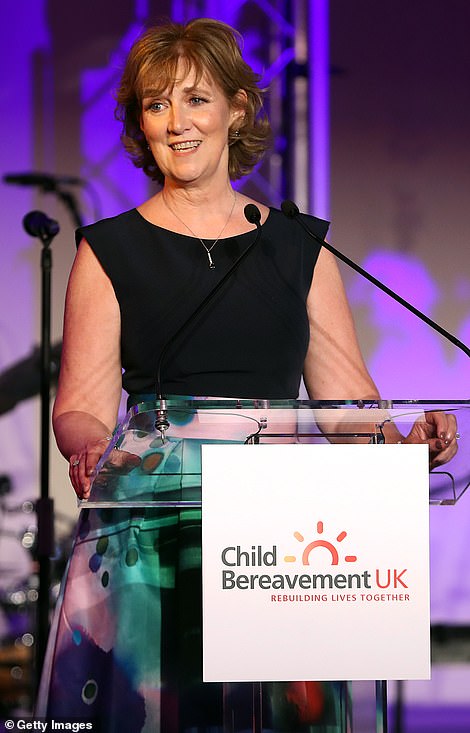 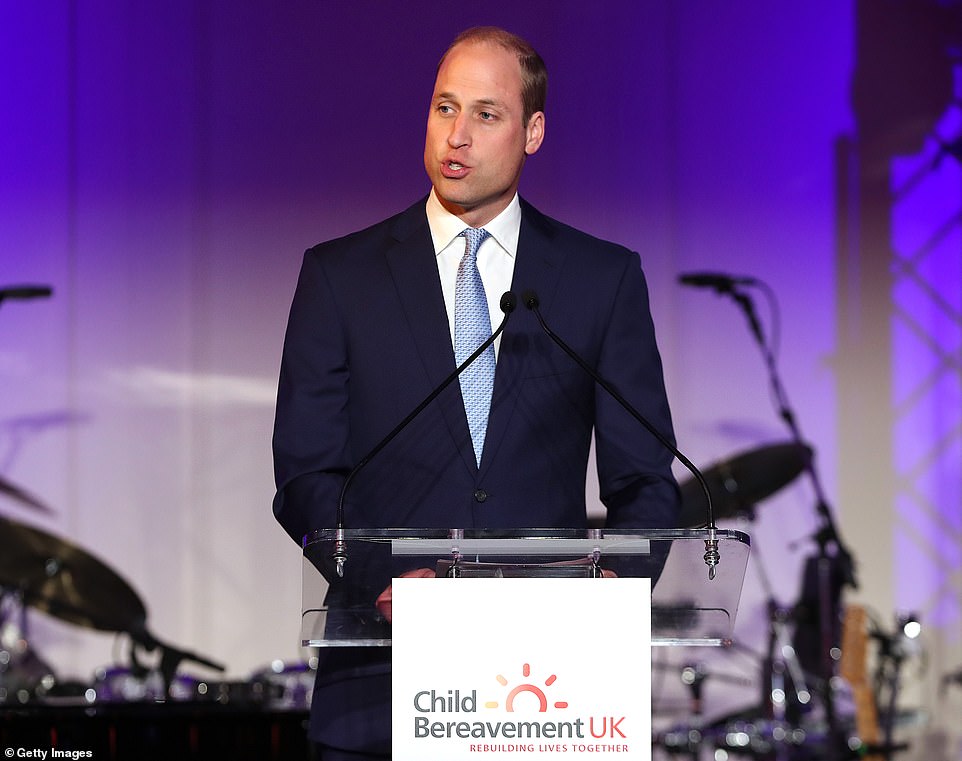 Father-of-three Prince William, pictured during his speech, donned a pale blue tie and navy suit for the event. He spoke about how he saw grief ‘in the eyes of D-Day veterans and families last week’ who were still carrying sorrow 75 years later

‘With great sympathy and sensitivity, you have spent the last 25 years working with children, young people and families to help them navigate the difficult path of grief.

‘This is a path no-one chooses. It has no map. And no end. But with careful support, it is a path that can become easier under foot.

‘The impact of this support is brought home to me every time I meet people who are helped by Child Bereavement UK.’

One of the charity’s patrons celebrity baker Mary Berry who lost her 19 year old son in a car crash in 1989 said: ‘When I lost I lost my son there was no such thing as Child Bereavement UK, you don’t know where to turn, they really give such tremendous support.

‘To see the Duke being so involved, a young man with a beautiful, lovely strong family unit is a tremendous help to the cause of loss and mental health of people who have suffered so much.’

William took time out to meet families who are being supported by Child Bereavement UK before his speech at the gala dinner in the grounds of Kensington Palace. 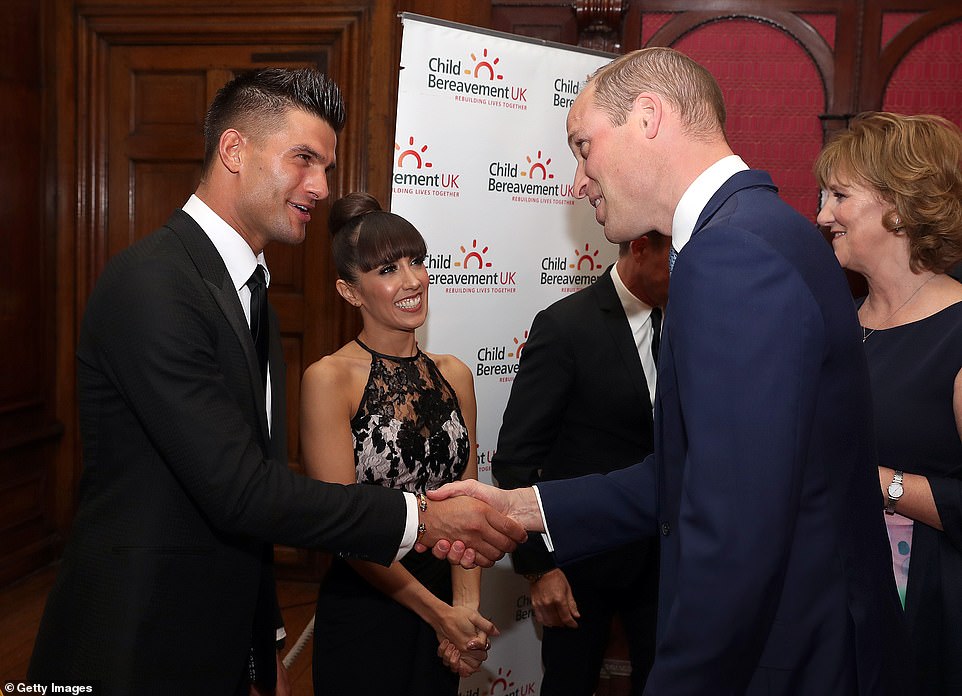 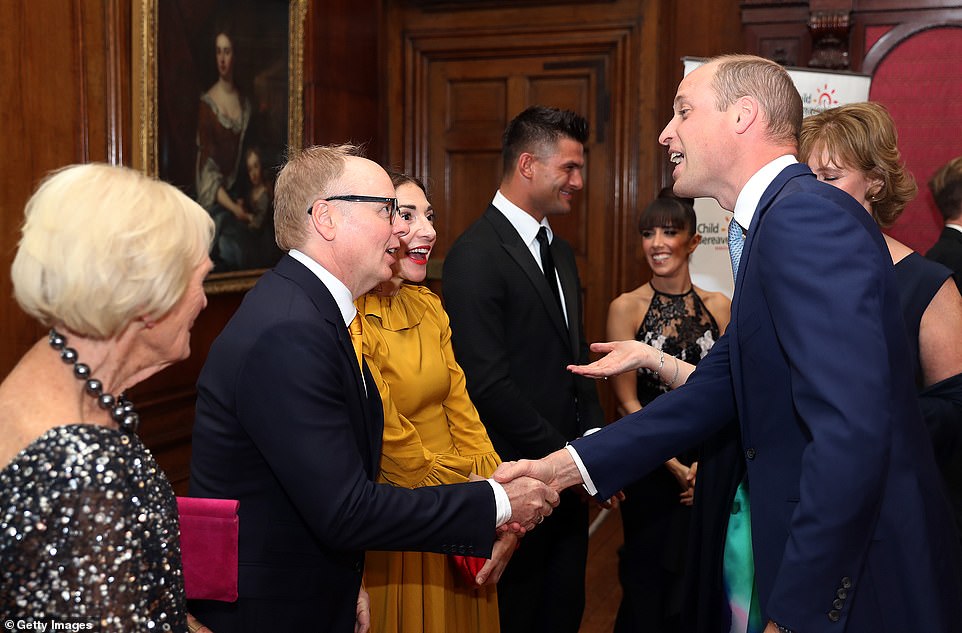 The Duke of Cambridge, pictured right greeting guests, has been the royal patron of the Child Bereavement UK since 2009

Jo and Ian Browell’s eight-year- daughter Lizzy does suddenly from a brain haemorrhage in November 2015.

The devastated parents were able to donate Lizzy’s organs for which they received The Order of St John Award for Organ donation of Lizzy’s behalf.

The family has received individual, couple and group support from Child Bereavement UK, as well as support for Lizzie’s sister Jessica, 16.

Jo said: ‘The counselling has been invaluable to us as a family, it’s helped us to live again.

‘Meeting other families has been an amazing rock which has helped us hugely and we can’t thank the charity enough for all they have done for us when we were so lost and devastated.’

Ian said: ‘It’s fantastic the Duke of Cambridge is involved in a charity like this and everything he is doing for mental health in general. 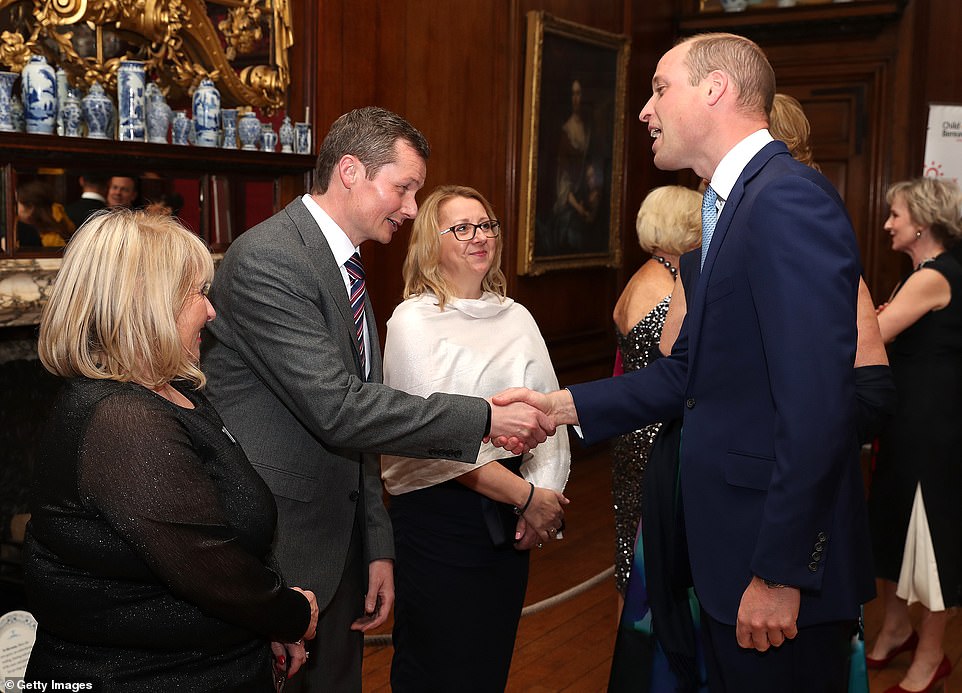 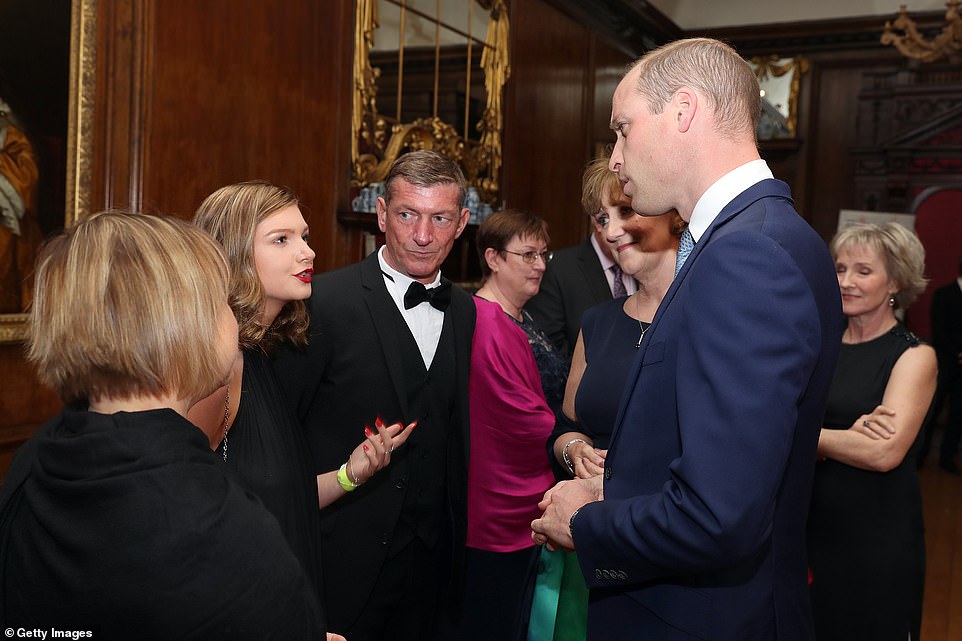 The Duke of Cambridge was seen speaking to guests including Clare Bullen, Rebecca Dutton and Mark Dutton of Child Bereavement UK at the event to celebrate the charity’s 25th birthday

‘His voice is being heard by so many people and so many men like me in particular. He is a wonderful ambassador.’

Child Bereavement UK supports families and educates professionals, both when a baby or child of any age dies or is dying, and when a child is facing bereavement.

The charity’s vision is for all families to have the support they need to rebuild their lives when a child grieves or when a child dies.

This year marks 25 years of helping families to rebuild their lives after the devastation of child bereavement.

Prince William, whose mother Diana, Princess of Wales died when he was 15, became a patron of the royal charity in 2009. 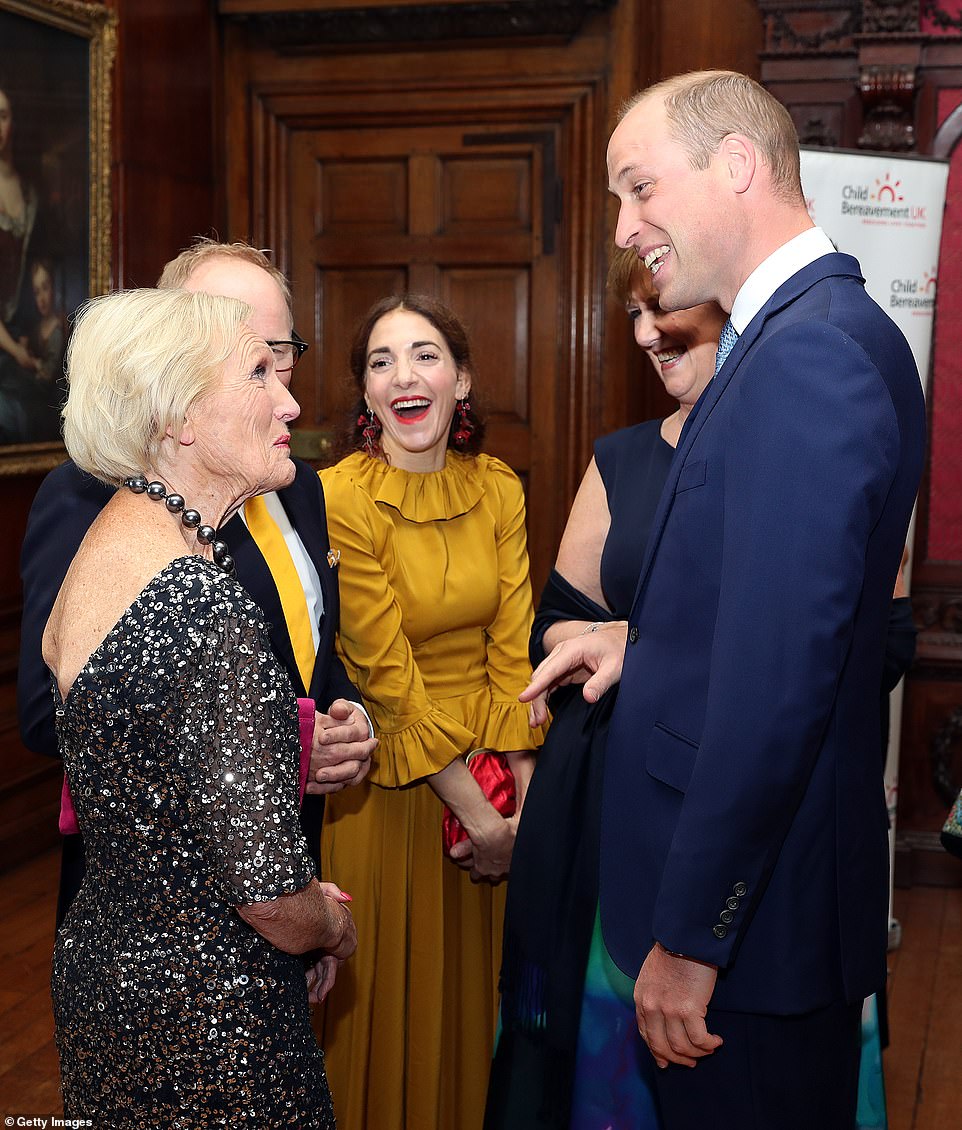 Mary Berry, 84, left, looked stunning in a sequined floor length gown at the event and shared a smile with Prince William

Diana was a keen supporter of Child Bereavement UK and William stressed the importance of its work in a comment on its website.

He said: ‘Anyone who has experienced the loss of a loved one will know only too well that you never stop grieving for those you have loved, and how important it is to find a way to live with that loss.

‘Child Bereavement UK has been helping families facing that journey since 1994 and that is why I have been very proud to work with this incredible charity as its patron since 2009.’

In May Prince William took part in BBC documentary, A Royal Team Talk: Tackling Mental Health, and spoke about the impact losing his mother at an early age had. 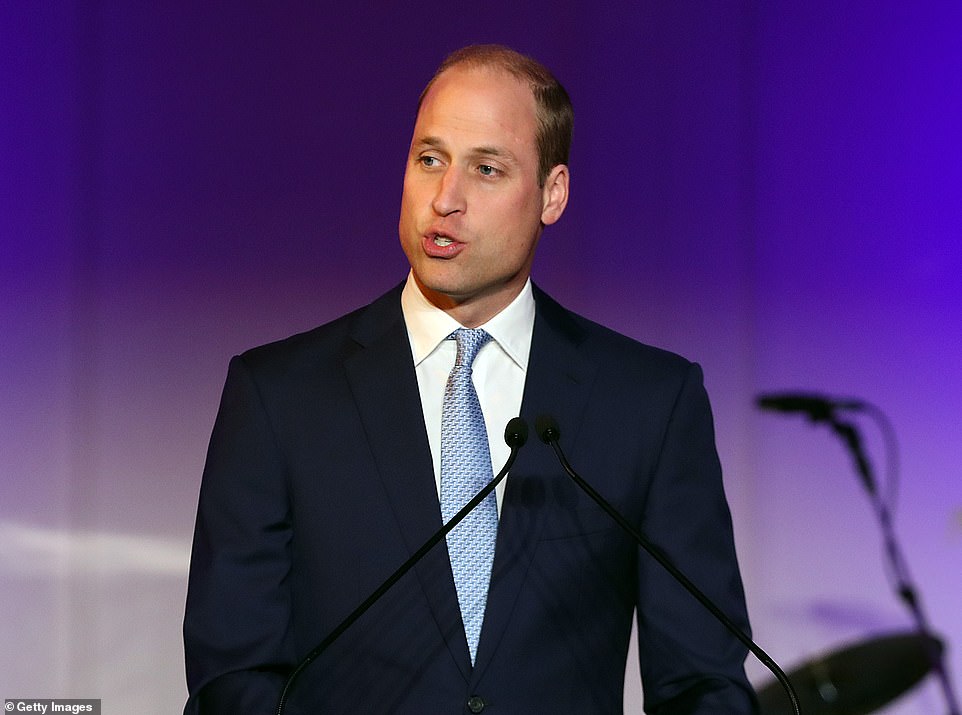 Prince William, pictured said it was ‘with great pride’ that he stood in front of the guests as patron of the charity and added that ‘Child Bereavement UK is a truly remarkable organisation’ 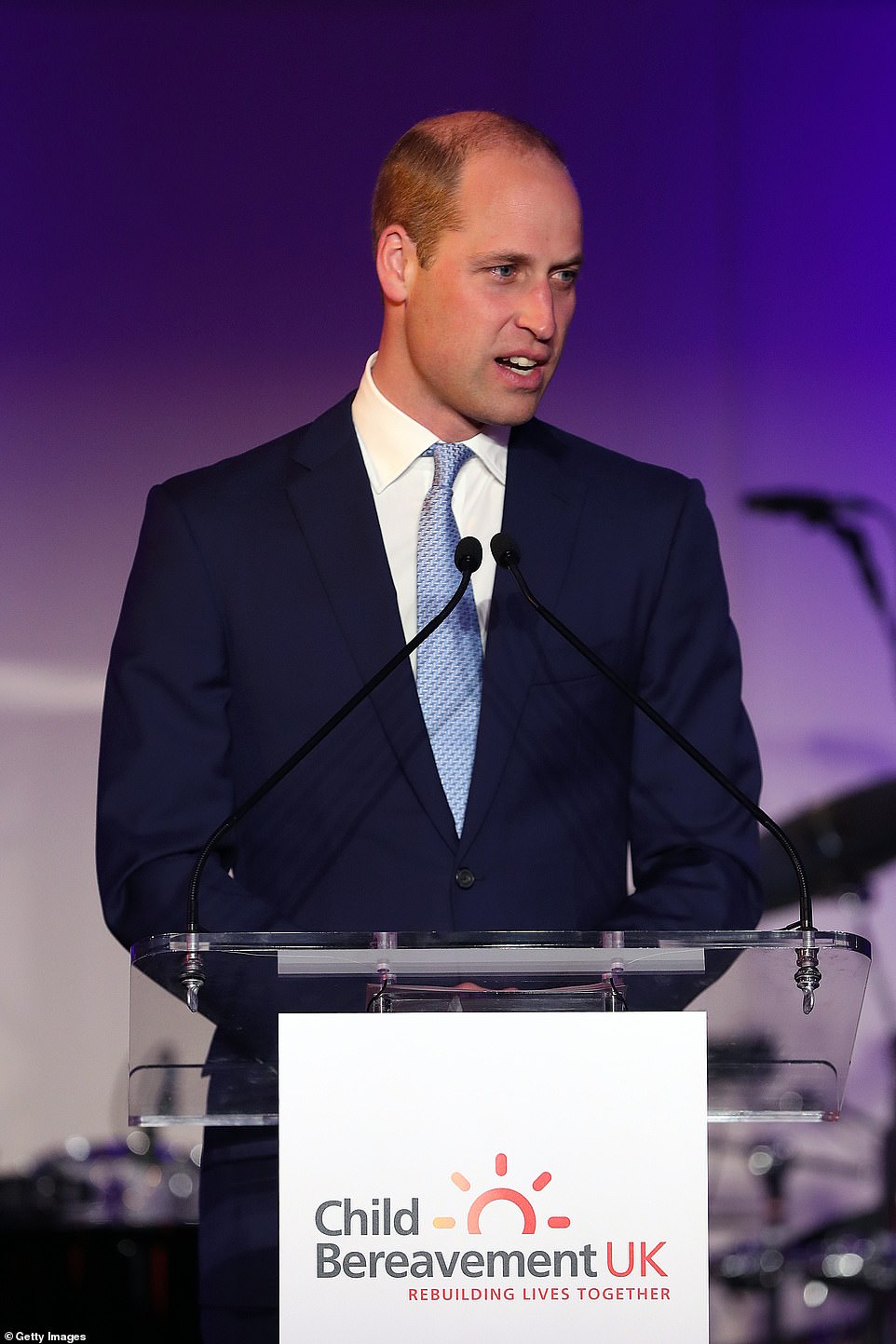 The founder of Child Bereavement UK Julia Samuel came up with the idea for the charity when visiting the late Princess of Wales at Kensington Palace. Pictured is Prince William during his speech this evening

During the show, presenter Dan Walker asked the father-of-three about the importance of discussing grief– particularly in light of the death of the princess.

William said: ‘I think when you are bereaved at a very young age… you feel pain like no other pain.And you know that in your life it’s going to be very difficult to come across something that’s going to be an even worse pain than that.’

But, he added optimistically: ‘It also brings you so close to all those other people out there who have been bereaved.’

He says you can see bereavement ‘in their eyes’ when speaking to those who have lost a loved one.

‘They want to talk about it, but they want you to go first, they want to have your permission that in that particular conversation – one on one – it’s ok to talk.’

Child Bereavement UK was founded by Julia Samuel, who was also a maternity and paediatric bereavement counsellor at St Mary’s Hospital in London for 23 years.

Each year the charity trains more than 10,000 professionals to help them better understand and meet the needs of grieving families.