Japan’s imperial family pay tribute to Shinzo Abe: Sombre Crown Prince Akishino is joined by his wife and daughter Princess Kako, 27, for the funeral in Tokyo

Crown Prince Akishino, 56, his wife Kiko, and daughter Kako, 27, attended the ceremony in Tokyo today, where thousands paid their respect to the former Prime Minister.

Abe, 67, was killed on July 8 as he attended while delivering a campaign speech in Nara is an assassination that shocked the world.

Clad in black, the members of the Japanese Imperial family came to pay their respect to Abe, who led the country from 2012 to 2020. 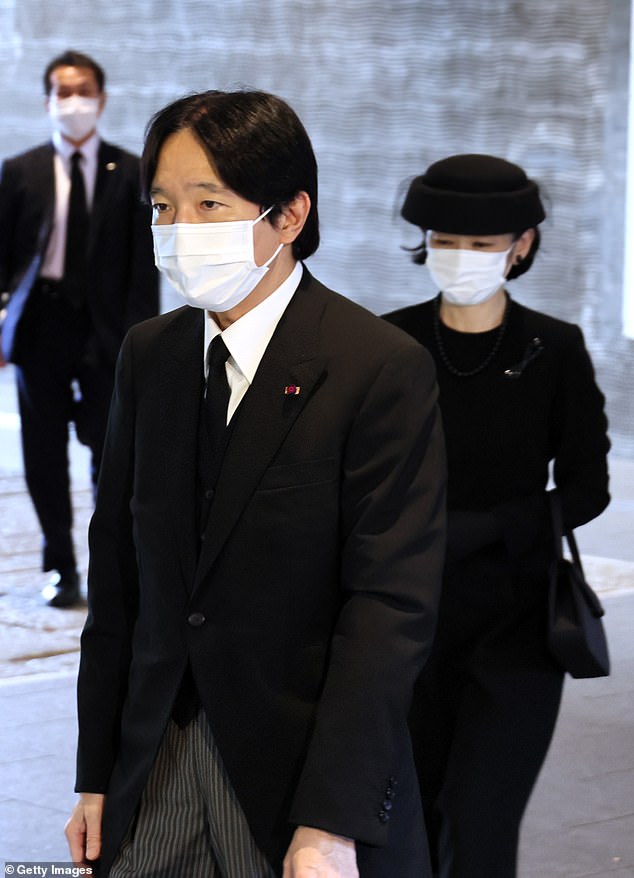 Crown Prince Akishino, his wife and youngest daughter attended the ceremony in Tokyo today, where thousands paid their respect to the former Prime Minister Shinzo Abe 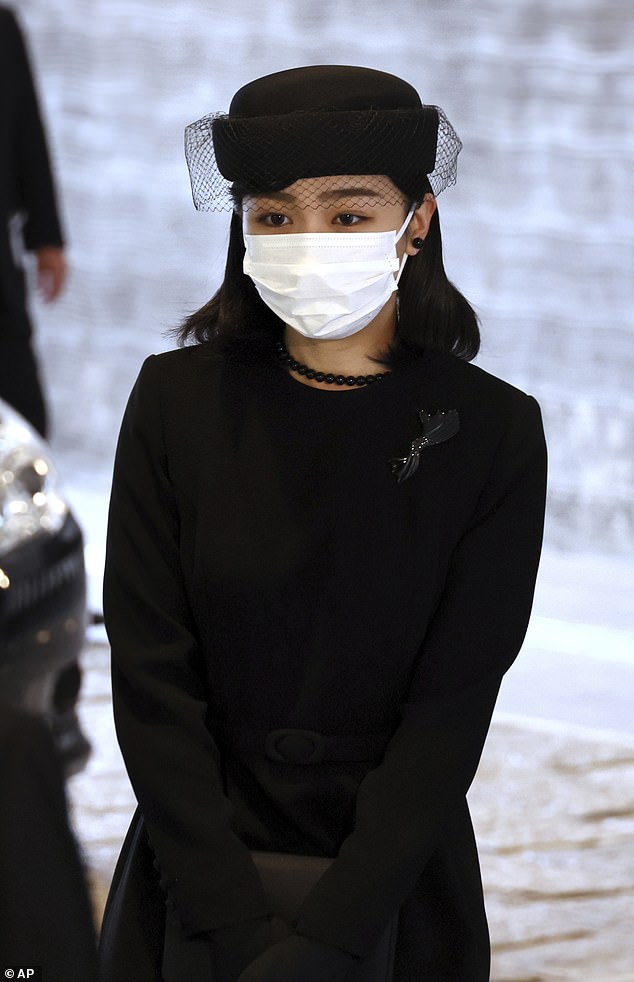 Princess Kako, 27, the youngest daughter of Akishino, looked pensive as she accompanied her parents to the ceremony 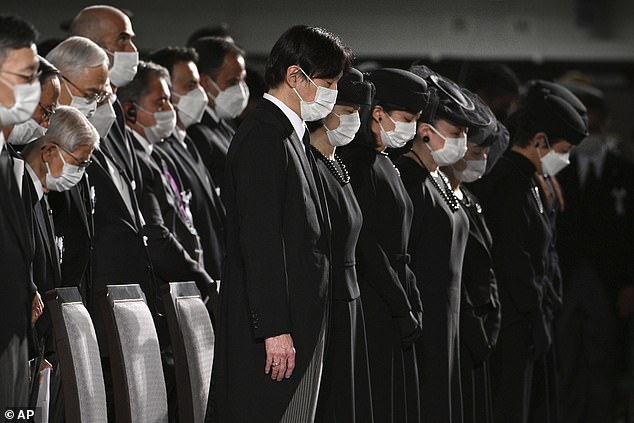 Akishino, Kiko, Kako and other members of the Imperial family bowed their heads in silence during the funeral

Akishino, 56, looked sombre as he approached the shrine for the late stateman.

His wife donned a black pearl necklace and a matching pair of earrings for the ceremony, which are considered a symbol of hope for wounded hearts.

The emperor’s brother and his spouse bowed their heads in sign of respect in front of Abe’s ashes before heading to their seats, where they stood with other members of the royal family.

He was accompanied by his youngest daughter Princess Kako, 27.

Abe’s widow, Akie Abe, in a black formal kimono, walked slowly into the Budokan hall venue carrying an urn containing her husband’s ashes, placed in a wooden box and wrapped in a purple cloth with gold stripes. 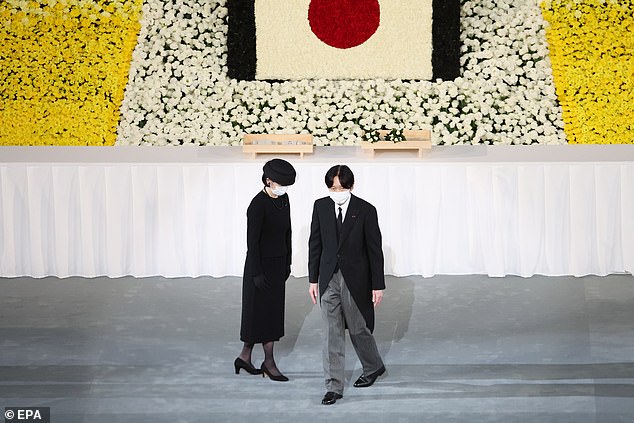 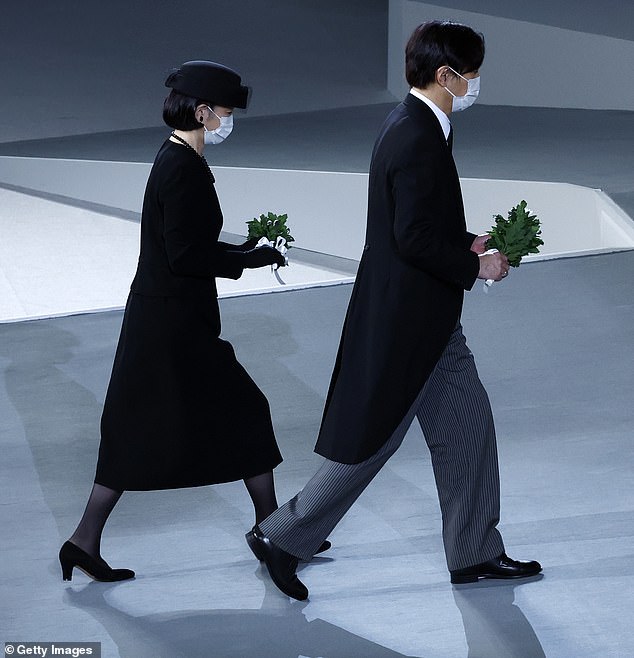 Akishino and Kiko , who were wearing black and grey, brought flowers to the ceremony as a mark of respect for the dead

Soldiers in white uniforms took Abe’s ashes and placed them on a pedestal filled with white and yellow chrysanthemum flowers and decorations.

U.S. Vice President Kamala Harris, among dozens of foreign dignitaries and 4.300 attendees, sat in the third row, next to Rahm Emanuel, the U.S. ambassador to Japan.

Abe was cremated in July after a private funeral at a Tokyo temple days after he was assassinated while giving a campaign speech on a street in Nara, a city in western Japan. 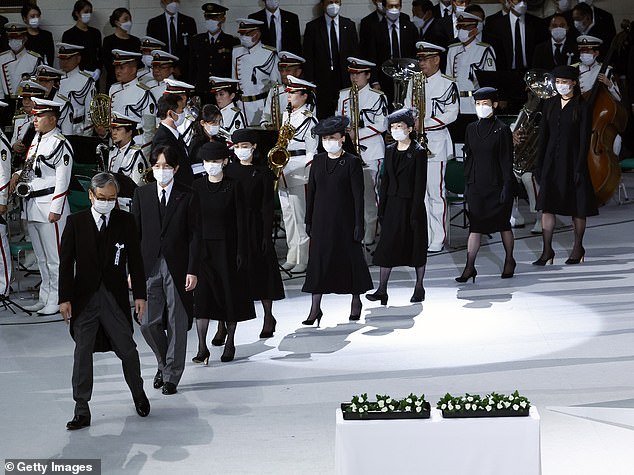 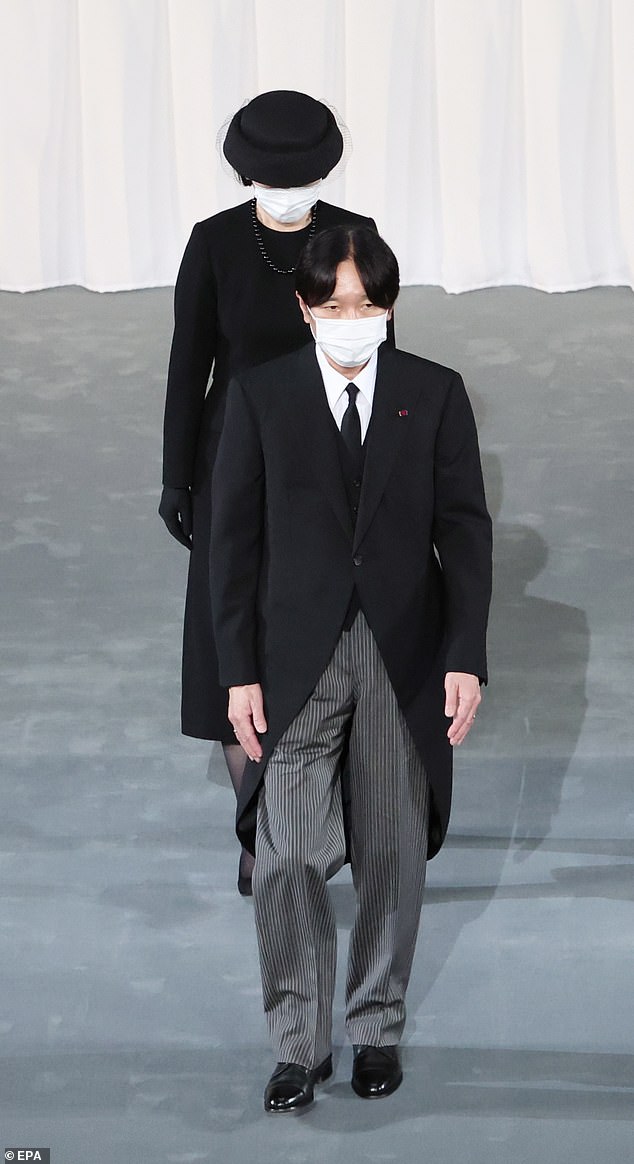 In accordance with Japanese protocol, Princess Kiko kept a respectful distance as she walked behind her husband 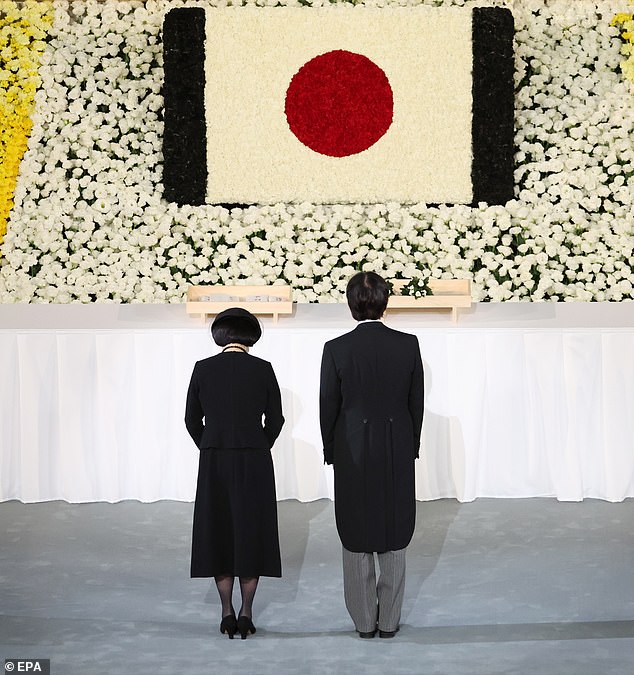 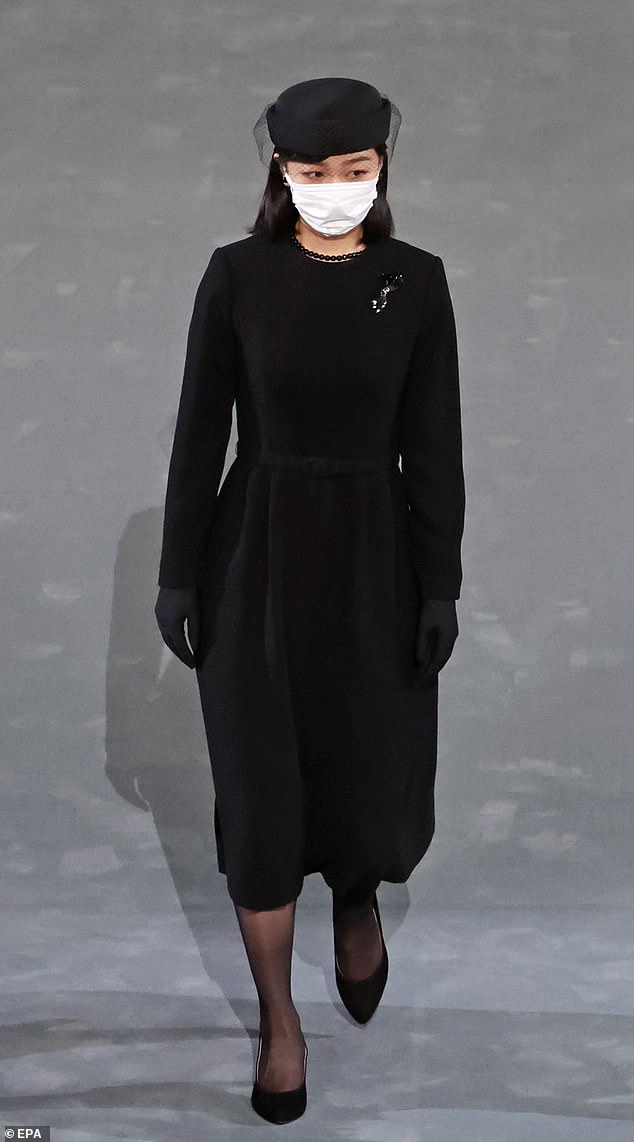 Their daughter Princess Kako, who was also wearing black pearls as a mark of respect, followed behind her parents

Kishida says Japan’s longest-serving postwar political leader deserves a state funeral. But the undemocratic decision to give him the rare honor with imperial ties, the cost, and controversies about his and the ruling party’s ties to the ultra-conservative Unification Church have fueled controversy about the event.

Tokyo was under maximum security, with angry protests opposing the funeral planned. Hours before the ceremony, hundreds of people carrying bouquets of flowers queued at public flower-laying stands at nearby Kudanzaka park. Their line stretched several blocks.

Masayuki Aoki, a 70-year-old business owner, recalls his ‘fist bump’ with Abe when he came to Yokohama, near his home, for campaigning just days before he was killed. 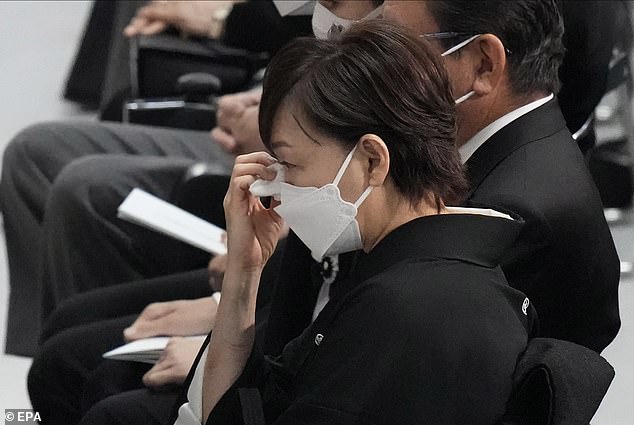 Akie Abe, widow of former Prime Minister of Japan Shinzo Abe, wiped away tears during the state funeral of her husband 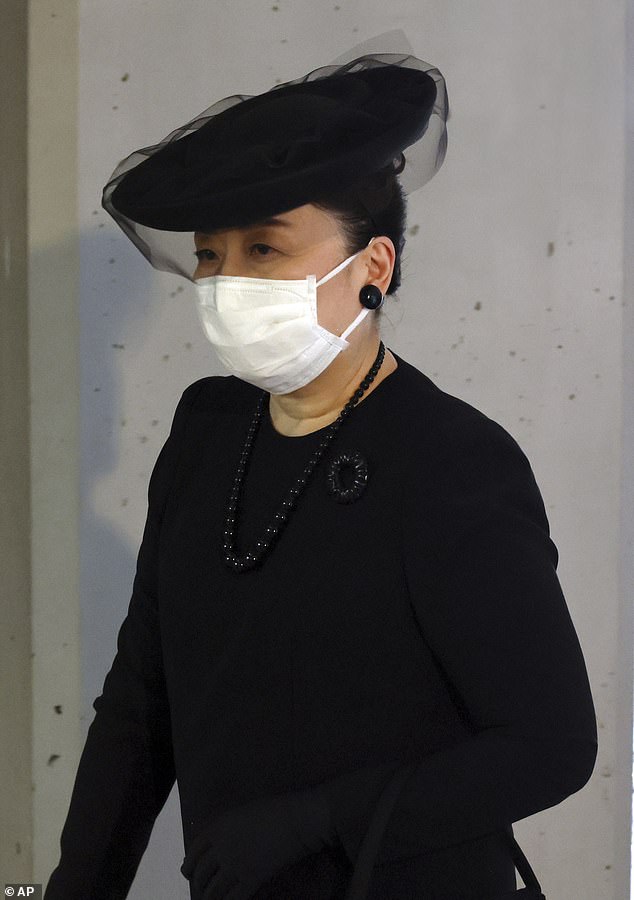 ‘I’m emotionally attached to him and I’ve been supporting the LDP, too,’ he said. ‘I had to come to offer him flowers.’

Masae Kurokawa, 64, who also offered Abe flowers, praised him as ‘a great figure who brought Japan back to the international level.’

The government maintains that the ceremony is not meant to force anyone to honor Abe. Japan’s main political opposition parties are not attending the event, which critics say is a reminder of how prewar imperialist governments used state funerals to fan nationalism.

In what some see as an attempt to further justify the honor for Abe, Kishida this week has held meetings with visiting foreign leaders in what he calls ‘funeral diplomacy.’

The talks are meant to strengthen ties as Japan faces regional and global challenges, including threats from China, Russia and North Korea. 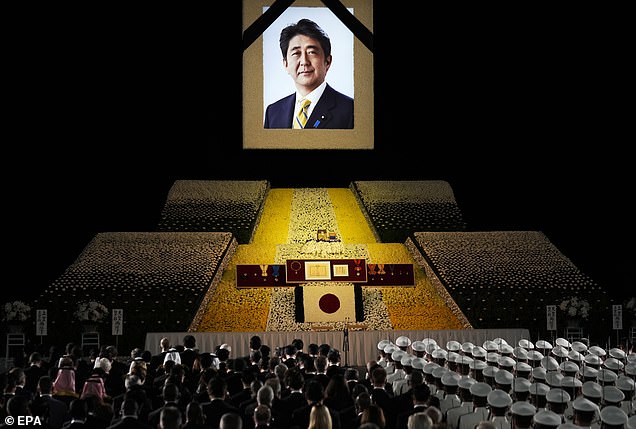 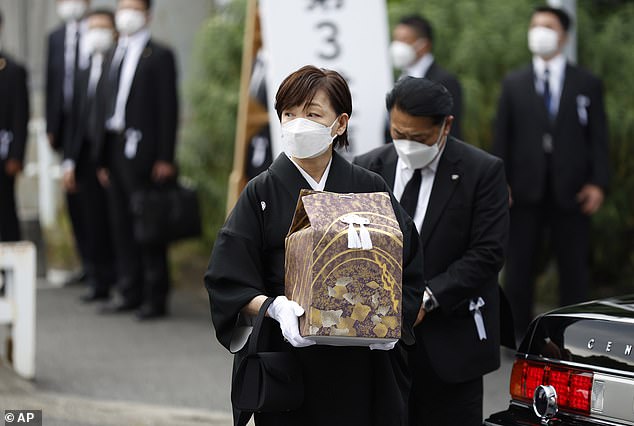 Akie Abe, Shinzo’s widow, carries her husband’s ashes into his state funeral which is taking place in Tokyo today 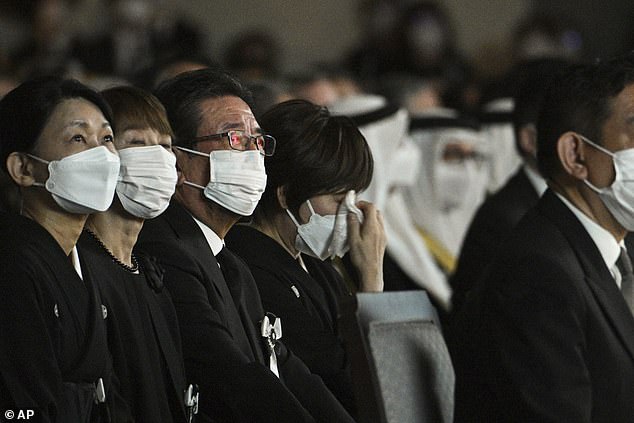 Akie Abe, Shinzo’s widow, dabs away tears as she sits alongside relatives at the state funeral of her husband – three months after he was shot dead by an assassin who was angry at his associations with a fringe religious group

He was to meet about 40 foreign leaders through Wednesday, but no Group of Seven leaders are attending.

Kishida has been criticized for forcing through the costly event and over the widening controversy about Abe’s and the governing party’s decades of close ties with the ultra-conservative Unification Church, accused of raking in huge donations by brainwashing adherents.

Abe’s alleged assassin reportedly told police he killed the politician because of his links to the church; he said his mother ruined his life by giving away the family’s money to the church.

‘The fact that the close ties between the LDP and the Unification Church may have interfered with policymaking processes is seen by the Japanese people as a greater threat to democracy than Abe’s assassination,’ wrote Hosei University political science professor Jiro Yamaguchi in a recent article.

Abe’s grandfather, former Prime Minister Nobusuke Kishi, helped the church take root in Japan and is now seen as a key figure in the scandal. Opponents say holding a state funeral for Abe is equivalent to an endorsement of ruling party ties to the Unification Church. 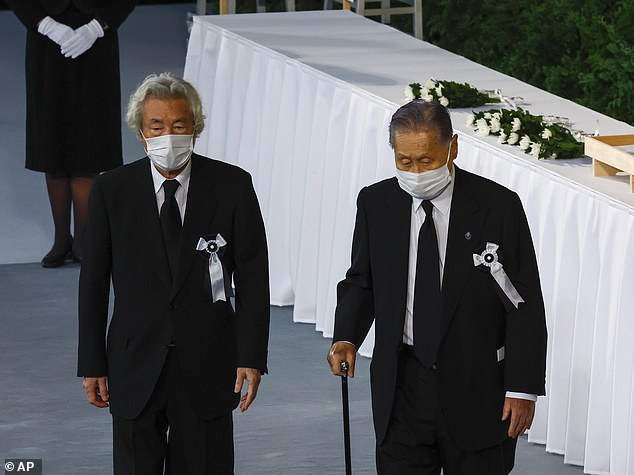