Welcome to the edge of the galaxy, a place called the Black Spire Outpost on the planet of Batuu.

That’s the setting for Disneyland’s brand-new Star Wars: Galaxy’s Edge; at 14 acres, the largest expansion in Disney Parks history. It’s a project years in the making and for legions of “Star Wars” fans — and fanatics — it’s the culmination of a decades-long dream come true.

“Good Morning America” took the first steps inside Black Spire Outpost at Disneyland earlier this week, several days before the new land opens to the public on May 31. (Note: Star Wars: Galaxy’s Edge opens on Aug. 29 at Walt Disney World). Reservations are required to enter the land until June 23 and with interest (read: crowds) expected to be exceptionally high, it may be some time before even the biggest fans get to experience the new land firsthand. So in the meantime, come along with “GMA” as we wander the markets, sample the food, pilot the “fastest hunk of junk in the galaxy” and discover some of the secrets of Star Wars: Galaxy’s Edge.

If you’re not familiar with the story of Batuu, that’s intentional. Save for a few mentions, little is known about Batuu (that will all soon change). It’s a move by Disney Imagineers to let every person coming to the new land have their own experience: in other words, from the biggest fans to “Star Wars” newbies, everyone is coming to Batuu and the Black Spire Outpost for the very first time.

Both Black Spire Outpost and Dok-Ondar were referenced in “Solo: A Star Wars Story.” Dok-Ondar’s Den of Antiquities is a shop selling “galactic artifacts.”

“The partnership between Disney and Lucasfilm goes back 30 years and there’s so much passion around ‘Star Wars,'” Greg Ashton, Executive Architect Walt Disney Imagineering, told “Good Morning America. “Nobody set higher expectations for this project than we did. There was so much desire to get it right, to make sure it felt authentic and immersive.”

Attention to the details — something Disney’s already known for doing exceptionally well — is a phrase that comes up repeatedly in our tour if this land. “It’s exciting, now to look back and realize we’re finally there, five years later we’ve built this small city, everything you see here is custom and there’s so much passion and detail,” Ashton said.

Millennium Falcon: Smuggler’s Run :”The ride the world has been waiting for”

When we interviewed Jon Georges, the executive producer of SWGE earlier this month, “the ride the world has been waiting for” was how he described the attraction, Millennium Falcon: Smuggler’s Run. It is one of two rides at SWGE. however, the other — Star Wars: Rise of the Resistance — is not open yet. It is expected to open before the end of 2019.

Expectations were high, and the Millennium Falcon did not disappoint. Here’s the gist: groups of six board the ship: pilots, gunners and engineers. Everyone is given their role and lined up accordingly. Your boarding group and team is called — and it’s time to step into the cockpit. 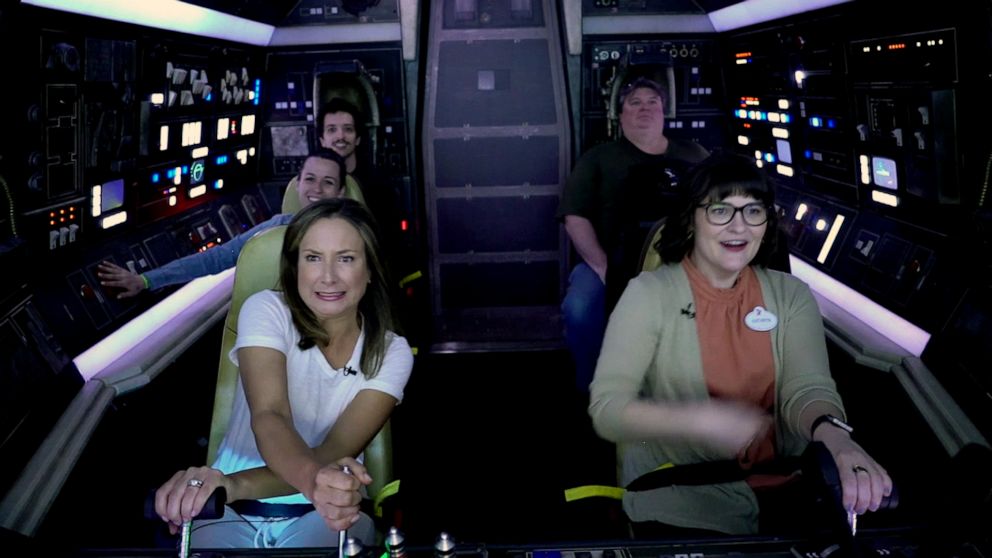 Each role has a different job with separate buttons and levers to push or controls to take. There are about 200 in the Millennium Falcon. That’s one of the reasons the ride is never the same twice: not only would a person not necessarily get the same role on a subsequent ride, but depending on who is at the controls and what they’re doing, the experience will vary.

It’s a team effort to collect and deliver vials of coaxium, a valuable hyperfuel. Depending on how well the team works together, credits are earned. Credits are tracked throughout the land for those who want to participate.

It’s a thrilling, heart-pounding adventure with a learning curve. You’re in control: You steer right, the ship goes right. You damage the ship, the riders in the engineer role make the repairs.

There are a total of five places to drink and dine at Black Spire Outpost with roughly 50 food and drink options in total. Because Batuu is one of the least populated planets in the galaxy and we know that some of its inhabitants are vegetarians, there’s a farm-to-table focus and more plant-based food and drinks than we’ve seen in any other land prior. 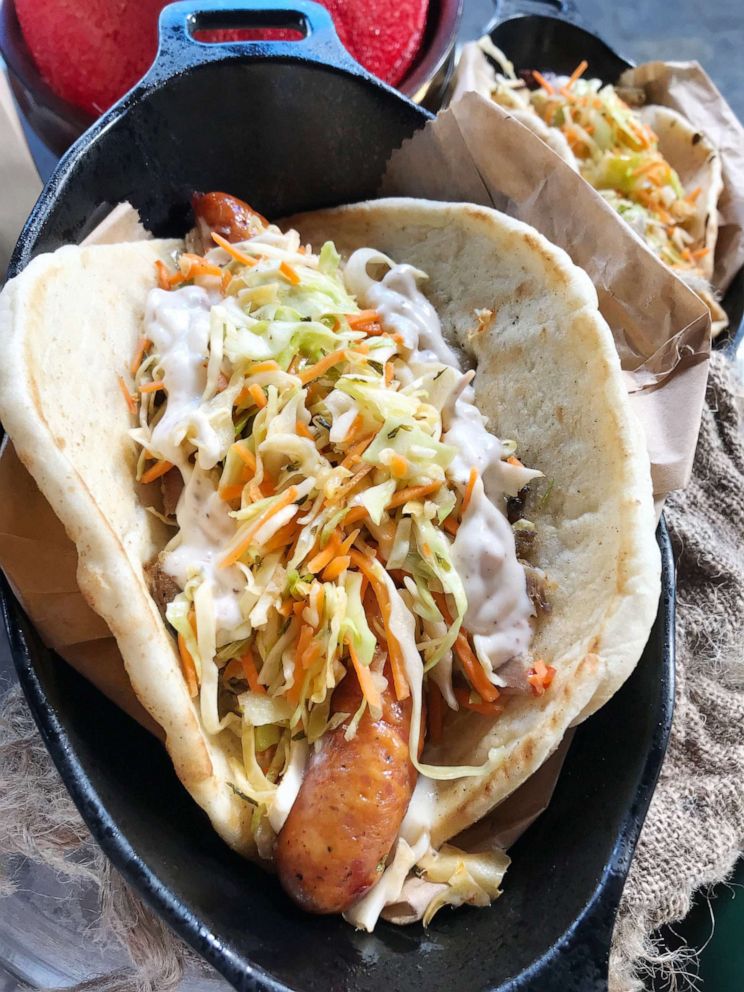 Olaga’s Cantina, the main watering hole and the first time alcohol will be available to the public at Disneyland; Ronto Roasters, home of the signature “Ronto Wrap” — a delicious roasted pork or grilled sausage on a pita; the Milk Stand, where guests can purchase the famous blue milk (spoiler: it tastes more like a fruit smoothie than milk); Docking Bay 7 Food and Cargo, where we tried and recommend the Felucian Garden Spread -plant-based meatballs over chimichurri hummus served with relish and a pita; and Kat Saka’s Kettle, where the main dish is Outpost Popcorn Mix – red-and purple, sweet and spicy popcorn that’s tasty and Instagrammable. 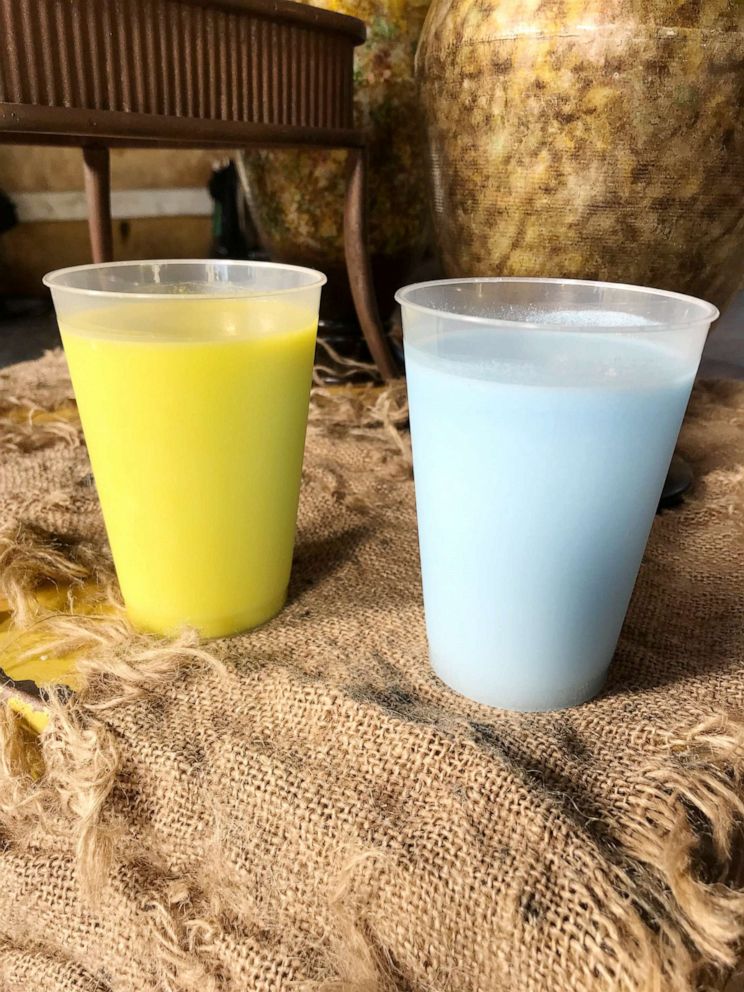 Mobile ordering through the Disneyland app will be available for Ronto Rosters, Milk Stand and Docking Bay 7 Food and Cargo.

Note: “GMA” will have a full food review on GoodMorningAmerica.com on Friday, come back for even more details.

One of the many interesting things shoppers will notice in the stalls and markets of Black Spire Outpost is that everything for sale is “in story.” So you won’t find any Mickey ears here, nor any Star Wars t-shirts. That’s because the people of Black Spire outpost would, of course, have no need for these things.

In total, there are nine – yes, nine — places to further your Star Wars story and purchase various merchandise. There are two notable standouts for the interactive nature of the purchasing process. The first is the Droid Depot, where “GMA” and guests are able to build their own droid. Upon entering a workshop stocked with parts, guests pick from a conveyor belt to construct their own droid. Ours was a red “R” droid we named “Tracie” for the woman who guided us through the process. Once built, guests place their droids in an activation station to bring them to life, allowing the droids to be operated via remote control. Once activated, droids may interact with other droids throughout Black Spire Outpost. Disney said the interactive experience in the Droid Depot is inspired, in part, by young Anakin Skywalker tinkering with C-3PO in “Star Wars: The Phantom Menace.” 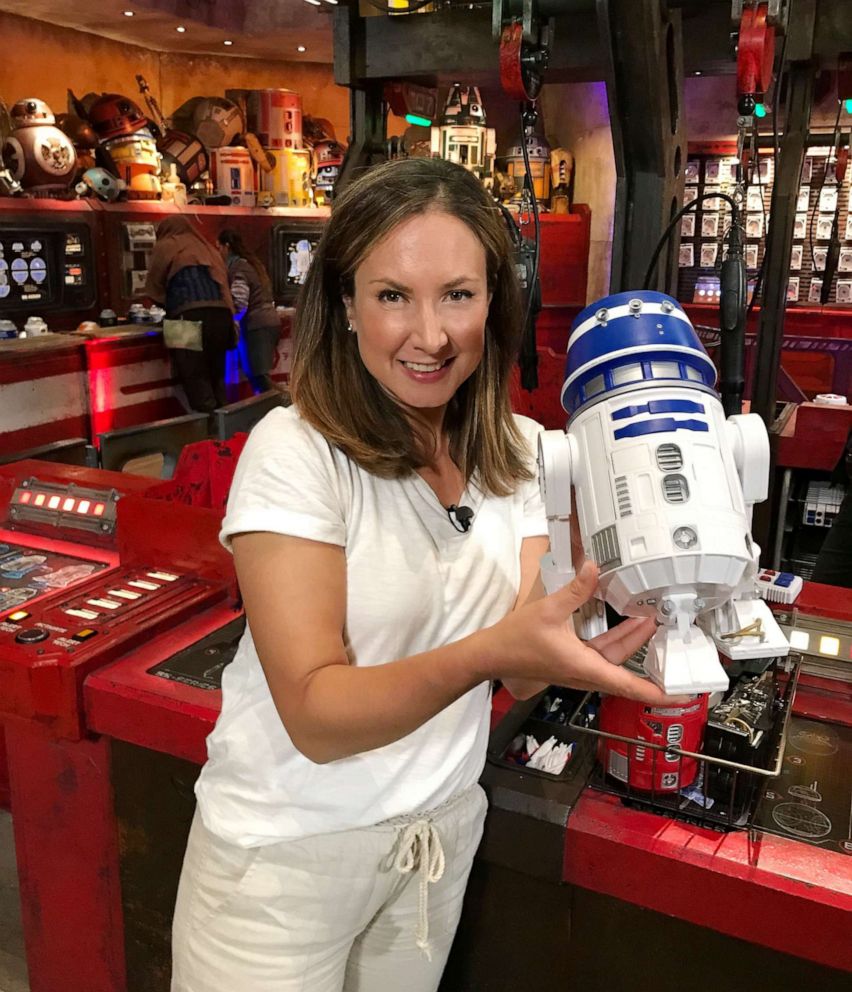 The second stop that’s a must do is Savi’s Workshop where guests build their own lightsabers. Choose from several themes: Peace and Justice, Power and Control, Elemental Nature or Protection and Defense. The process, Disney said, draws some of its inspiration from episodes of “Star Wars: The Clone Wars,” where Jedi younglings learn how to build their own lightsabers. 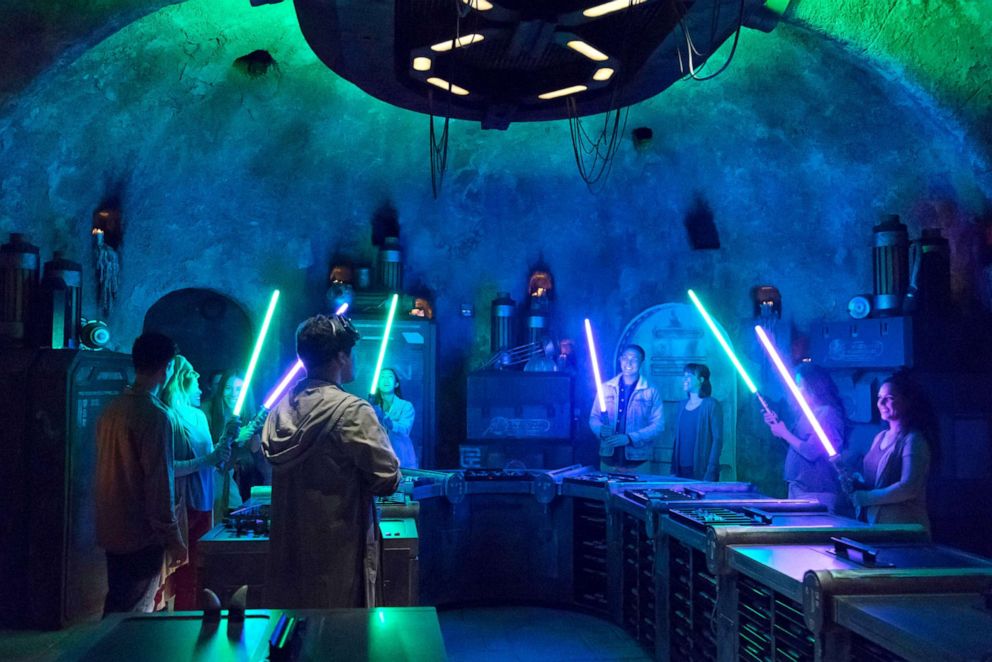 And while you won’t find a Star Wars t-shirt, you will find plenty of garb to outfit yourself. Black Spire Outfitters sells tunics, robes and belts. The Jedi robes and tunics available for purchase are modeled after the costumes for Obi-Wan Kenobi and Anakin Skywalker in “Star Wars: Revenge of the Sith.”

There are “hidden gems” as Disney likes to call them, all over the new land. Here are a few “GMA” favorites:

1. Ronto Roasters: Don’t miss a photo of the podracing engine. It’s a call out to “Star Wars:The Phantom Menace,” while the former smelter droid turning the spit of meats is similar to a droid seen in Jabba the Hutt’s palace in “Star Wars: Return of the Jedi.”

3. Center of the land: Batuu’s landscape is dotted with tall petrified tree trunks, and Black Spire Outpost takes its name from a trunk in the center of the village that is darker than all the others.

4. Throughout the land: Imagineers took rubbings from the feet of the R2-D2 droid used in “Star Wars: A New Hope” and turned those into a set of three-dimensional wheels. Then they built a trolley with those wheels and rolled it through the land before the concrete pathways fully dried to leave behind authentic droid tracks that guests might spot as they explore the outpost.

5. Chess Room on the Millennium Falcon: have a seat at the table and look at the shelf above your head: there you will see the helmet Luke Skywalker wore during his first lightsaber training.

With the opening of Star Wars Galaxy’s Edge just 2 days away, the people behind the project are anticipating a positive response.

“What links us as Disney Imagineers and filmmakers at Lucasfilms is our passion for storytelling,” said Ashton. “It’s what drives us. We know our guests will appreciate it. It’s so fun to see a person’s reaction when they see the place for the first time.”

The Walt Disney Company is the parent company of ABC News.