Home » Lifestyle » This year's TV hits influenced how we dressed

Now that’s a fashion show: From Bridgerton’s gowns in January to December’s Strictly rhinestones, this year’s TV hits influenced how we dressed 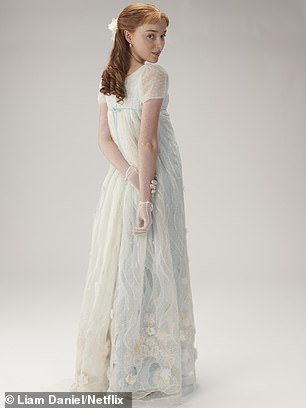 And the frothy empire-waist dresses worn by Daphne Bridgerton (Phoebe Dynevor) were almost as lusted after as the Duke.

Even though we were stuck at home in the third lockdown, sales of long gowns soared. Demure brand Ghost reported a 61 per cent increase in sales of its floaty frocks. Still available for £89 and £145, ghost.co.uk. 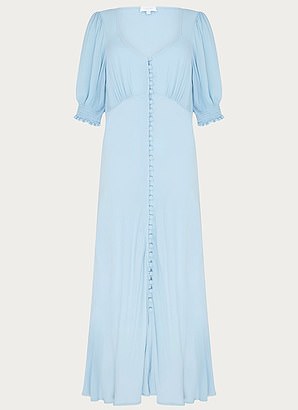 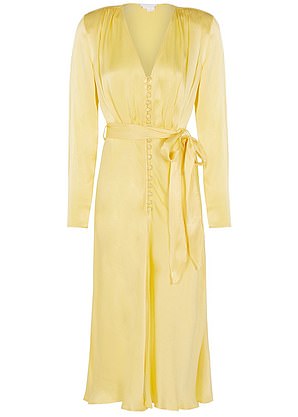 It’s A Sin — which told the story of friends living through the Aids epidemic in the 1980s — smashed records, becoming Channel 4’s biggest ever drama launch.

A slogan T-shirt inspired by the show was worn by celebrities including Amanda Holden and Sir Ian McKellen, and raised more than £500,000 for the Terrence Higgins Trust, a sexual health charity. 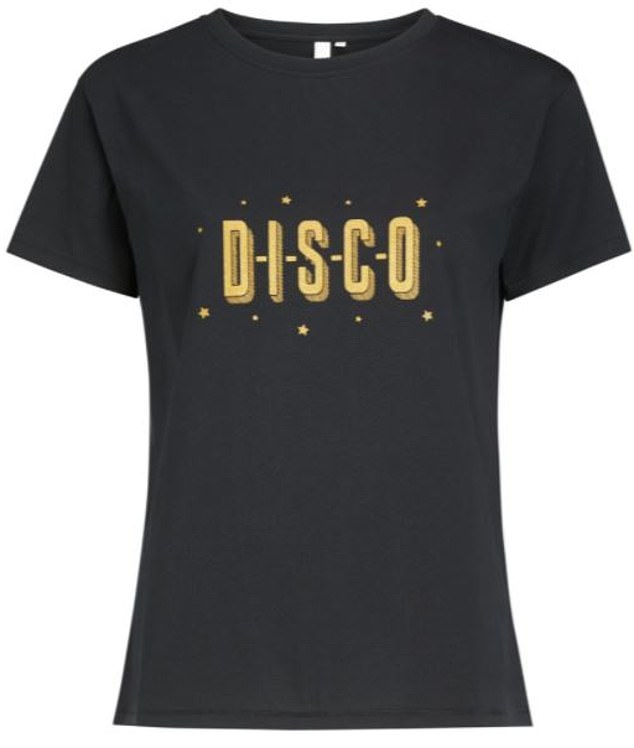 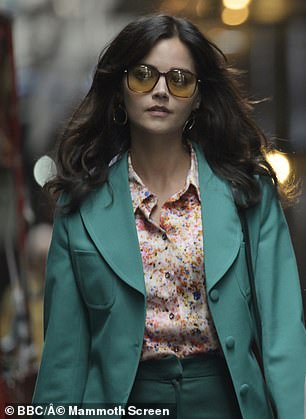 Pictured: Jenna Coleman as Monique in The Serpent

This BBC thriller set in 1970s Asia transfixed audiences — but what got them spending was the bohemian style of Jenna Coleman’s character, Monique.

From vibrant suits to flared jeans and geometric-print blouses, there wasn’t a look we didn’t want.

And Monique’s teal suit caused a 66 per cent spike in searches (Mango’s version, £39.99, quickly sold out). 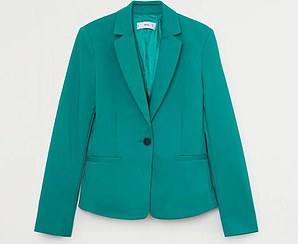 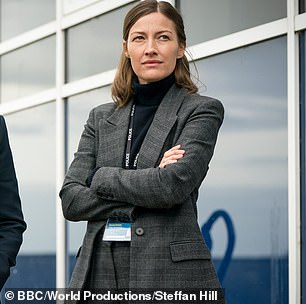 As lockdown restrictions eased, what better workwear inspiration than sharply dressed DCI Joanne Davidson (Kelly Macdonald)? BBC police hit Line Of Duty was back for a sixth series — with 12.8 million viewers watching the season finale. Online retailer Pretty Little Thing said searches for blazers increased by 144 per cent. At Reiss, the Larsson blazer was a bestseller (£285). 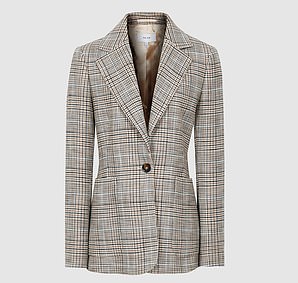 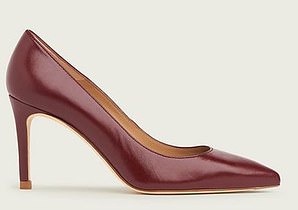 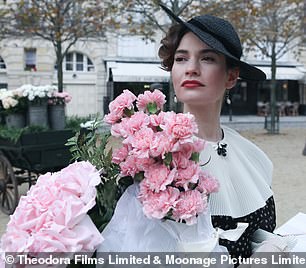 Pictured: Lily James as Linda Radlett in The Pursuit Of Love

The Pursuit Of Love

The Pursuit Of Love, a BBC adaptation of the Mitford novel, had five million viewers glued to its opening episode.

The show’s most wearable trend? A prim midi like this £130 sequinned sunflower print, Monsoon’s bestseller in May. 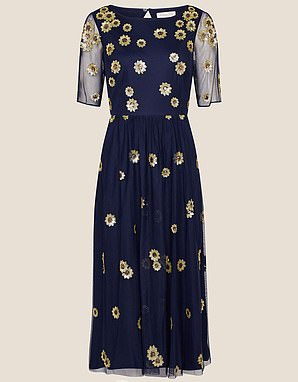 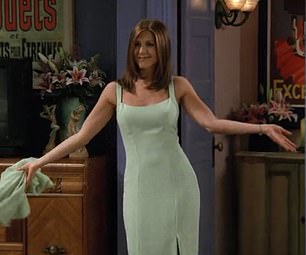 Pictured: Jennifer Aniston as Rachel Green in Friends: The Reunion

Friends: The Reunion brought together all six ‘friends’ 27 years after the iconic series began. It was Sky One’s most-watched show ever, with 5.3 million tuning in.

And when eagle-eyed viewers spotted the similarity between this mint-green Whistles dress and one worn by Jennifer Aniston’s character Rachel Green, it quickly went viral.

Featuring the same square neckline, thick straps and side split, it’s a piece of 1990s perfection. Sales of the Whistles dress flew up by 400 per cent at John Lewis (£199). 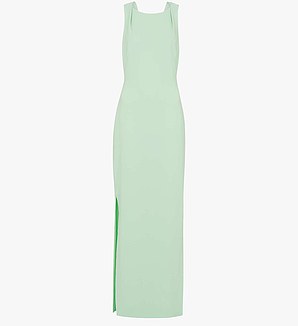 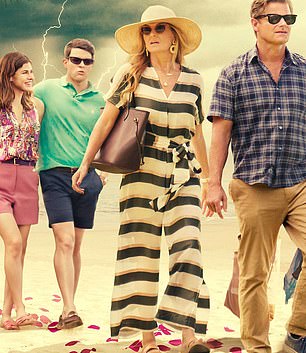 Pictured: Connie Britton as Nicole in The White Lotus

While many of us were sticking to a staycation in the summer, The White Lotus offered just the dose of tropical escapism we all needed.

In the Now TV series’ Hawaiian resort, guests were swanning around in fabulous kaftans and jumpsuits (think the striped number worn by Connie Britton’s character Nicole).

All of which had viewers shopping for a holiday — even if we weren’t yet allowed to head to Hawaii ourselves. Luxury womenswear label Plumo reported increased sales of straw hats (£89, plumo.com). Jumpsuits also flew off the shelves (£182, farfetch.com). 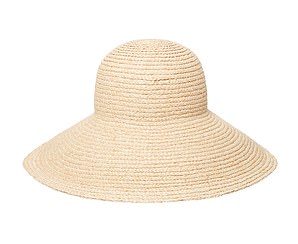 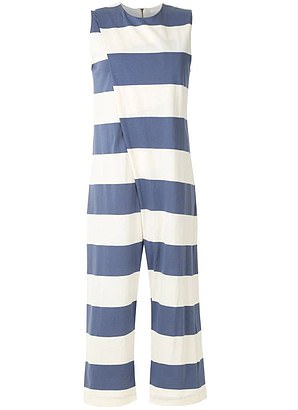 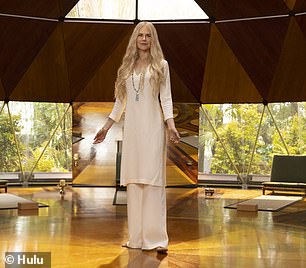 Nicole Kidman as a mysterious wellness guru was just one reason for our obsession with Amazon Prime’s Nine Perfect Strangers.

What viewers really wanted to know, however, was where Kidman’s character, Masha, shopped. Her pink lace top from French brand The Kooples was quick to sell out, as was the Cult Gaia eyelet lace dress (£800). 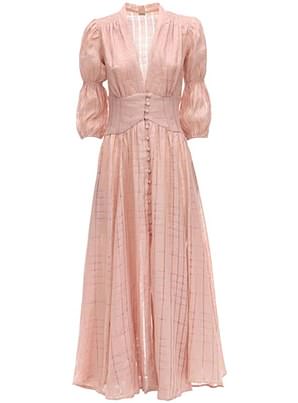 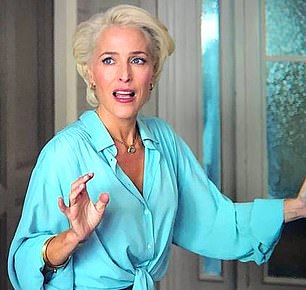 Season three of the quirky school comedy Sex Education saw 55 million of us tuning in during the first month.

And while bumbling main character Otis (Asa Butterfield) isn’t much of an icon, his mother, Jean (Gillian Anderson), made us all long for statement colourful jumpers and smart shirt dresses.

The yellow bra she wore in episode one trended on Twitter, searches for pink jeans more than tripled when she wore them, according to online store Pretty Little Thing, and her Celia B Singapore dress sold out online.

But poor old Otis wasn’t left out in the cold. His three-colour puffer jacket became famous. H&M said searches for puffer jackets increased by 80 per cent. 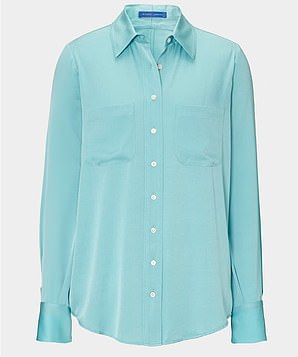 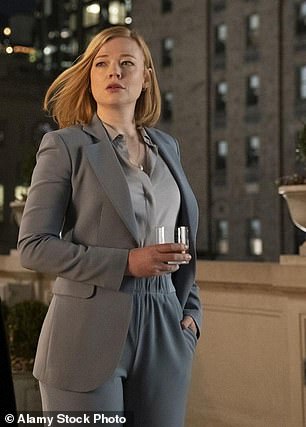 October saw the launch of season three of Succession, the HBO drama about a dysfunctional family dynasty.

The first episode drew 1.4 million viewers and sparked a craze for ‘billionaire chic’. Queen of this look is Shiv Roy (Sarah Snook).

The key? Sumptuous fabrics — think cashmere, velvet and silk — in clean, min- imalist styles, such as this shirt, £138, and trousers, £138, from Reiss.

After the first episode, shopping platform Lyst reported views of cashmere pieces increased by 25 per cent, while nearly three times as many people looked at turtlenecks compared with the same time last year.

At Jigsaw, one in every nine items sold during this month was a cashmere jumper, while at Reiss the Nova roll-neck was a best-seller alongside their signature tailored pieces. 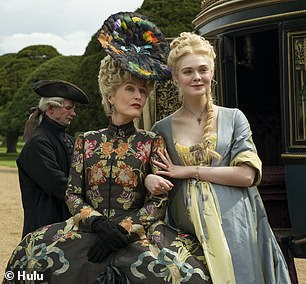 Pictured: Gillian Anderson in The Great

Gillian Anderson popped up again in Amazon Prime’s The Great, loosely based on Catherine the Great’s rise to power in 18th-century Russia.

This pleated lace maxi dress was one of the month’s best-selling pieces at Jigsaw (£265). With its sheer lace, voluminous, pleated sleeves and smocked cuffs, it’s fit for an empress. 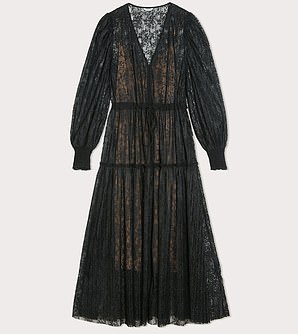 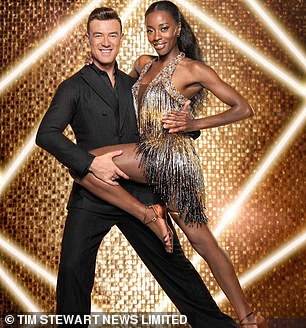 With only two weeks remaining until the Strictly final, the glitz of the ballroom is already being reflected in our Christmas outfits as we make up for last year’s lack of festivities.

L.K. Bennett — a favourite of the Duchess of Cambridge — reported its Christmas partywear has sold well. At River Island, the number of online shoppers searching for sequins has doubled, and its sequin dress (£120) sold out in a week. 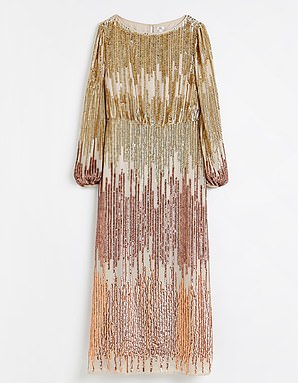