Half of the house buyers in 120 middle-ring Melbourne suburbs will be paying the state Labor government’s new premium rate of stamp duty within 10 years if the long-term price trend continues.

The transfer duty increases, to be included in Thursday’s state budget alongside hikes to land tax on investment and commercial properties, were pitched by the government as being aimed at wealthy buyers of high-end real estate worth more than $2 million.

In 2020 Melbourne had 15 suburbs, including the exclusive neighbourhoods of Brighton, Middle Park, Hawthorn and Toorak, where the median house price was above $2 million. 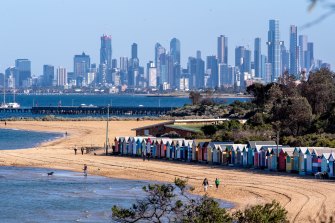 Brighton is among the Melbourne suburbs with a $2 million median house price. Many more are expected to join it over the next decade. Credit:Eddie Jim

But an analysis by The Age of 10 years of sales data from the Victorian Valuer-General’s office shows median prices even in unheralded suburbs such as Essendon North, Patterson Lakes and Lower Plenty soaring past $2 million by 2030 if values continue on their long-term trajectory.

The city is set to notch up 120 $2 million suburbs in 2030, which is the equivalent of about one in four Melbourne suburbs for which there is robust data on changing median house prices.

Half the house buyers in those neighbourhoods will be paying the top rate of 6.5 per cent on the value of their homes above the $2 million threshold.

Treasurer Tim Pallas’ office confirmed on Wednesday the thresholds would be fixed and not adjusted annually for inflation.

The land tax rises on land worth more than $1.8 million are expected to bring an extra $1.5 billion into the state’s coffers in the next four years. They were still attracting criticism on Thursday from the commercial property sector, which is expected to pay the vast bulk of the tax increase.

But Melbourne non-profit research institute Prosper Australia came to Mr Pallas’ defence, saying the state government was justified in capturing some of the value in the $136 billion of property value growth Prosper says Victoria experienced in the 2019-2020 financial year.

New data from Domain shows just 6.7 per cent of Melbourne houses changed hands for more than $2 million between October 2020 and April 2021. But senior research analyst Nicola Powell said the extraordinary growth in house prices in Melbourne in recent decades meant the state government should have an idea that the premium stamp duty revenue base was set to vastly expand.

“We’ve seen extraordinary price growth in Melbourne over the past 20 years that more and more suburbs are going to be paying this increase in stamp duty,” Dr Powell said.

“With changes to stamp duty and tax, you need to have a long-term view about where prices are going to go and how many households will eventually be impacted.”

Mr Pallas told The Age on Wednesday the tax increases were going to be paid by those who had the “capacity to make a contribution”.

“Every Victorian put their shoulder to the wheel when we needed it during the pandemic and by doing that, we have been able to get out of what many would have thought was an impossible situation that confronted us,” he said. “One of the mechanisms that we therefore need to put in place is a recognition that where there is a capacity to make a contribution to the overall community, those that have that ability should be able to do it.”

“The government is sending the right message in moving the tax system away from taxing our incomes, and onto the tax base where the big chunk change is made – in property,” he said.

“Even as the pandemic was in full throttle, Victorian residential land prices still managed to increase by a remarkable $135.6 billion.

Tune in for our live blog from 11am