Home » Lifestyle » Trans teen is crowdfunding £20,000 for her reassignment surgery

Transgender teen, 18, who came out at 13 is crowdfunding £20,000 for gender reassignment surgery because she faces a ‘scary’ seven-year wait on the NHS – and claims it’s a ‘life or death situation’

A desperate transgender teen is crowdfunding to raise £20,000 for gender reassignment surgery – or faces a ‘very scary’ seven-year wait on the NHS.

Aria Serplus, 18, from Bournemouth, first came out as transgender at 13-years-old and within months she had legally changed her name.

The 18-year-old had to wait almost two years to be seen by the UK’s only gender identity service for children, the Tavistock clinic, before being offered puberty blockers in 2019 to stop her ‘developing into a boy’.

Almost two years on, the art student is preparing to start hormone replacement therapy [HRT], which will cause her to go through ‘female puberty’, while she looks ahead to gender reassignment surgery.

After hitting a financial wall, Aria launched a GoFundMe page which has raised more than £2,350 towards the mammoth five-figure bill, in a desperate bid to slash her ‘distressing’ wait for help. 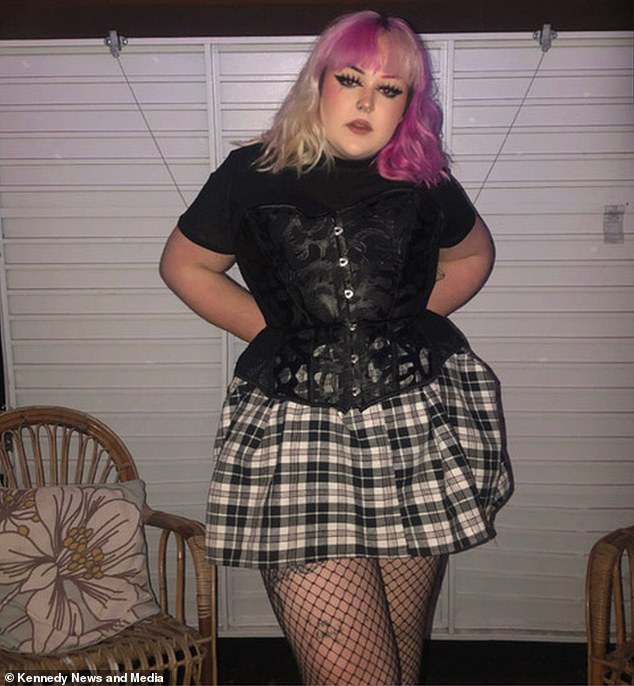 Aria Serplus, 18, from Bournemouth, pictured, first came out as transgender at 13-years-old and within months she had legally changed her name. She is now crowdfunding £20,000 in order to pay for her gender reassignment surgery 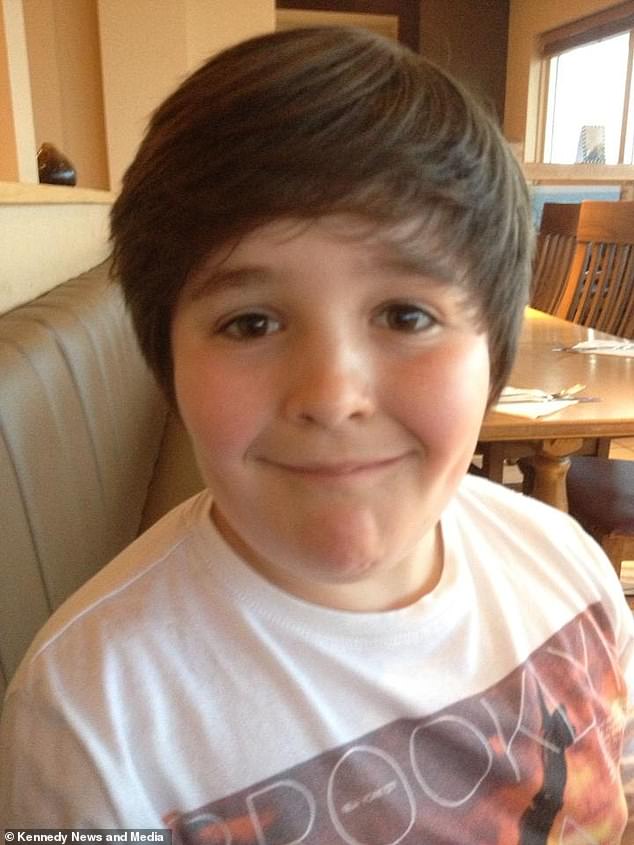 Aria, pictured before she told her family she was trans, aged 13, was put on puberty blockers in 2019

Describing surgery as a ‘medical necessity’, Aria said: ‘For most transgender people it’s a life-and-death situation.

‘If I wanted to do this all through the NHS, with bottom surgery, the waiting times are huge.

‘I try my best to think positive but it is quite distressing to know the funding isn’t there.

‘Having to wait that long is very, very scary. At the moment, for the first appointment it’s around two to three years. 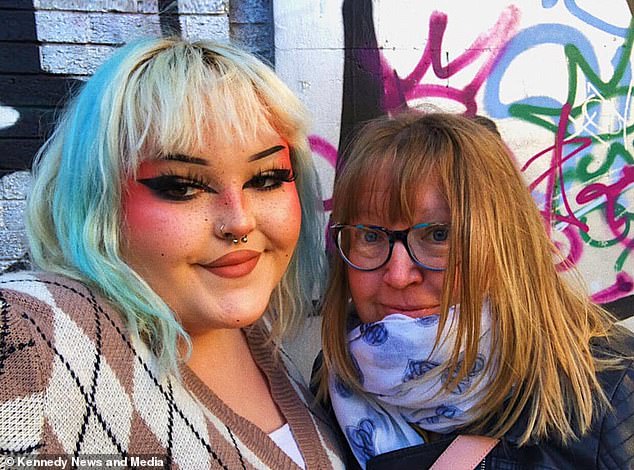 Aria said getting the much anticipated sex reassignment surgery was a ‘matter of life or death’ but saif she could count on the support of her mother Lara Rowe, 52, pictured right

Then for your second appointment, there’d be another year and a half [wait]. I could be waiting five to seven years for the NHS.

‘The GoFundMe will be for funding my hormones privately, or with a shared-care agreement with my GP.

‘It will fund top surgery in 2021 or 2022 and most likely for bottom surgery as well, but I’m not 100 percent sure, because I need to see what the wait times are like [on the NHS].

‘If I had money left over from being on hormones and top surgery, and I decided to go on the NHS for bottom surgery, the money would be donated to trans charities. 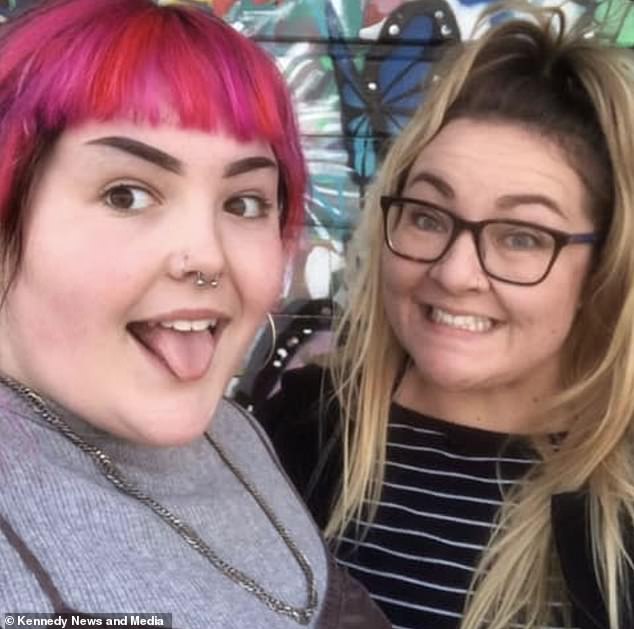 Aria, pictured, revealed her sister Rainbow Wells, 29, had also been supportive of her coming out as trans 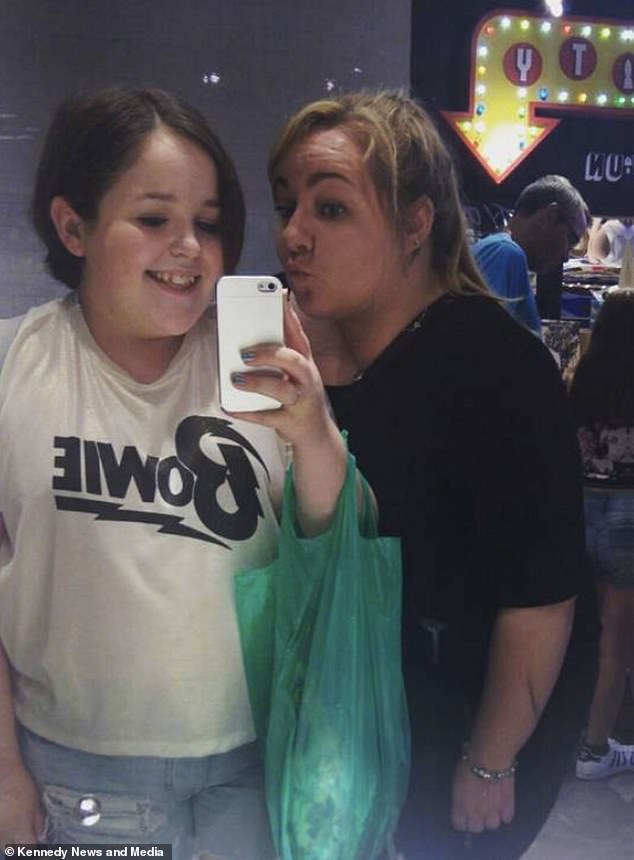 The teen, pictured left during a shopping trip with her sister, said she did not want to be painted as ‘someone who is trying to take money from innocent people’

‘If people would like to donate and are feeling generous, the [GoFundMe] is there, but I don’t want to be painted as someone who is trying to take money from innocent people.

‘I think transgender people are often portrayed in a bad light but it’s no different to other medical expenses.

‘It’s quite expensive from the get-go, but I do see it as a necessity.’

Aria struggled with gender dysphoria since childhood before initially coming out as gay to her supportive mum Lara Rowe, 52, and sister Rainbow Wells, 29, in January 2016.

After realising she had been ‘putting off’ coming out as trans, Aria opened up about her gender identity three months later.

Aria said: ‘I was about 13 when I came out to my family as gay. They were very supportive. 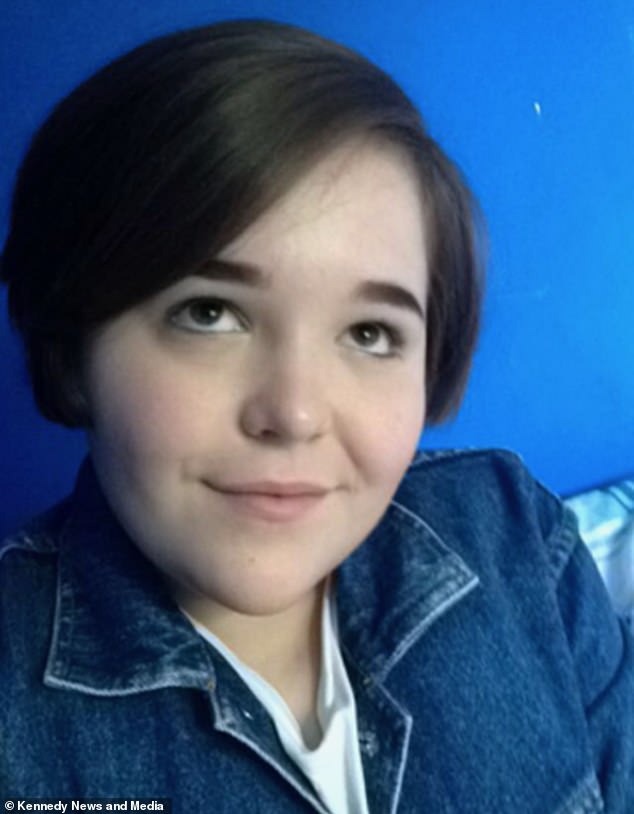 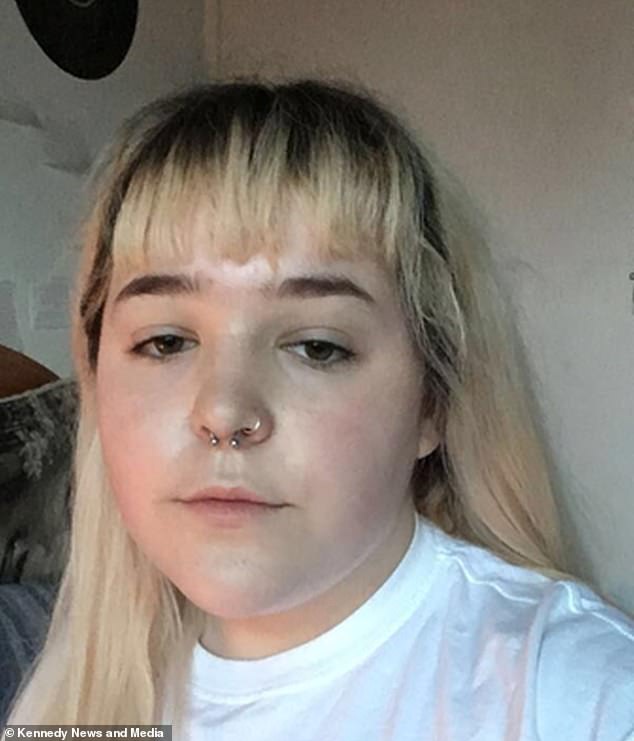 Puberty blockers were the first step in Aria’s transition and although she still struggles with gender dysphoria daily, her anxiety about her voice breaking and growing facial hair have subsided. Pictured now

‘I was struggling a lot with gender dysphoria [then]. Puberty was starting and a lot of my friends were getting into relationships and finding themselves.

‘I thought coming out as gay might make me feel a bit better – it was a step closer to what I actually wanted.

‘I have an older sister, Rainbow, who’s 11 years older than me. She was really supportive too. It brought us closer.

‘Before I came out, I was scared to be in touch with my feminine side, whereas afterwards I got closer to my sister because we went shopping together.

‘I always knew I wanted to be a girl but being trans had such negative connotations in the media and on social media that I put off accepting it. 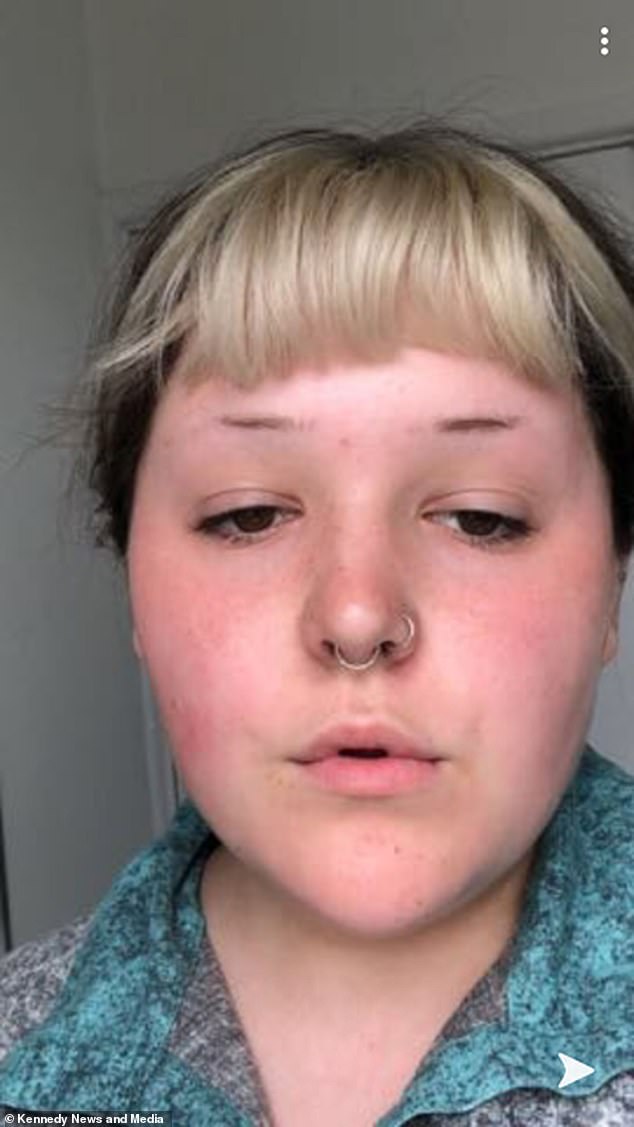 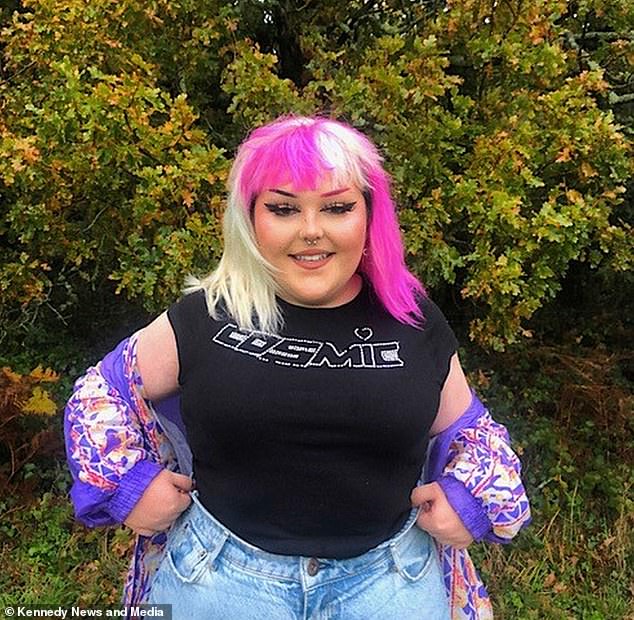 Aria, pictured now, said she was lucky because she was a late bloomer, meaning her puberty started late, which facilitated her puberty blockers 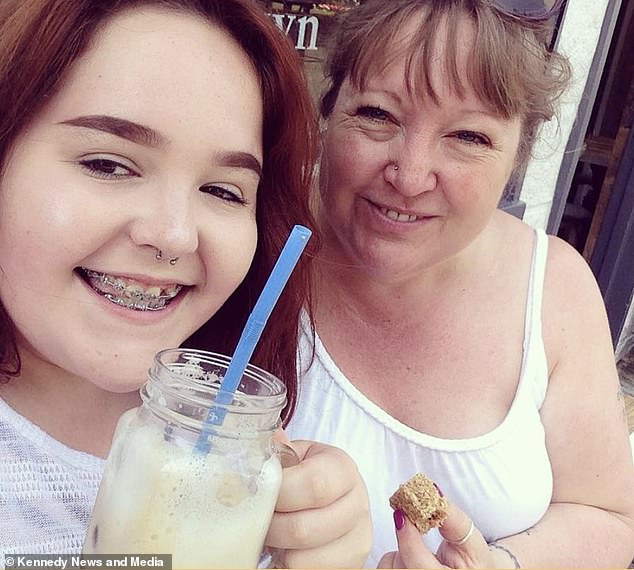 Pictured enjoying a milkshake with mum Lara. She admitted she woke up everyday scared that she would have a ‘manly voice’

‘A few months later, I came out to my mum and sister as trans. I legally changed my name when I was 14.

‘Again, they were so, so supportive. I’m so thankful for them.’

Shortly after coming out, Aria’s mum took her to her GP, unsure of how to help her daughter.

The teen was then referred to her local Child and Adolescent Mental Health Services [CAMHS] and 18 months later, attended her first appointment at the Tavistock and Portman NHS Foundation Trust in London.

Aria said: ‘My mum took me to the doctor straight away not knowing where to turn and they referred me to CAMHS. It was super helpful. 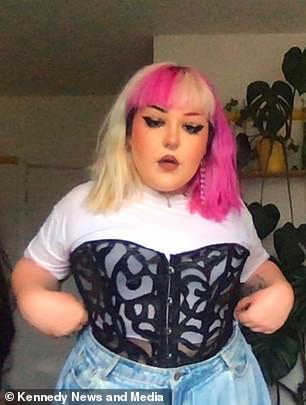 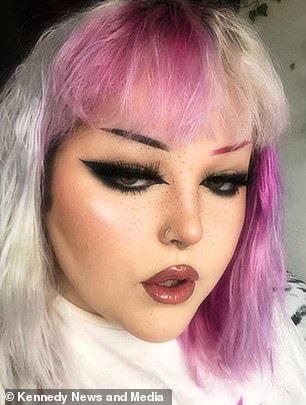 Aria, pictured now, said she was looking to the next step of her transition, which would be hormone replacement therapy 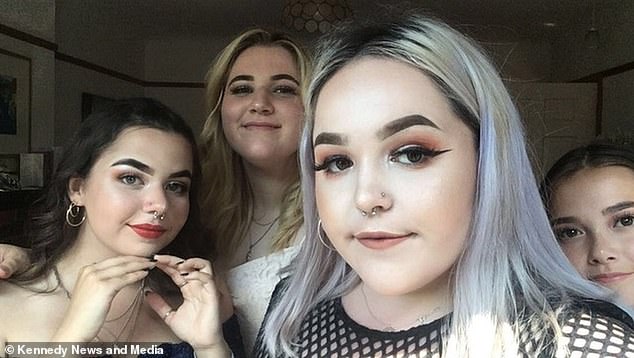 Aria with her friends. The teen said she still struggled with gender dysphoria and had adopted coping mechanisms to deal with it

‘On my second appointment, I was referred to Tavistock gender clinic.

‘I was on their waiting list for a year and a half for my first appointment. By then I was about 15.

‘I went to Tavistock talking about things for a year [of monthly appointments], having more in-depth counselling and explaining how I felt.

‘Then I was referred to University College London Hospital [UCLH]. I saw a paediatric doctor that specialises in gender dysphoria.

‘We then came to the decision to have puberty blockers.’

Puberty blockers were the first step in Aria’s transition and although she still struggles with gender dysphoria daily, her anxiety about her voice breaking and growing facial hair have subsided. 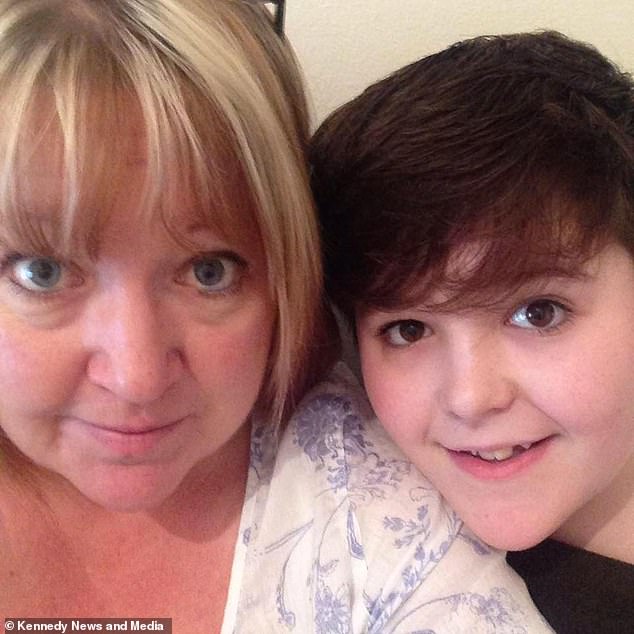 Lara and Aria. The teen said going through puberty as a trans person was a very difficult time that she struggled with daily

Rainbow, Aria and Lara at the beginning of her transition. She explained hormone replacement theray and the following surgery would cost her a lot of money

Aria said: ‘Going through puberty was one of the most difficult things I’ve ever [faced].

‘I was lucky because I was a late bloomer. I started puberty blockers at 16 and I was only just starting in the second stage. That usually happens around 13.

‘If I wasn’t trans, that would have been quite distressing for me, but being trans, I felt that my body was working with me.

‘I was spending everyday so scared I’d wake up with a manly voice, facial hair and broad shoulders, developing into a triangle shape.

‘It was a very, very distressing time and I struggled with that a lot. 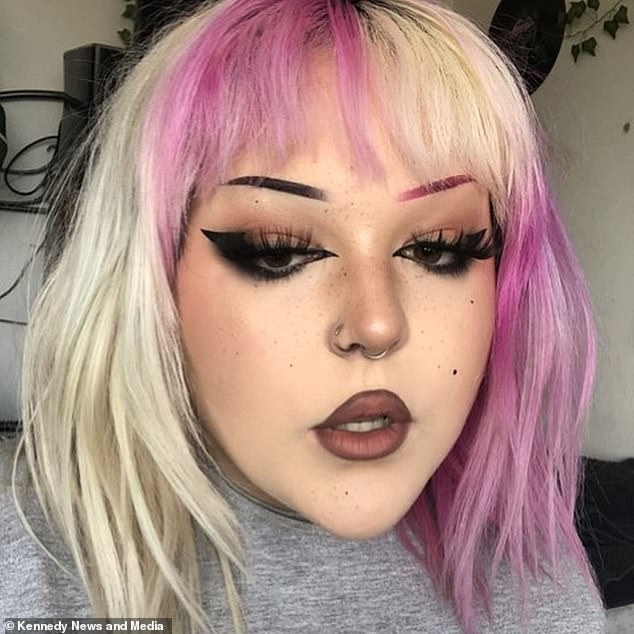 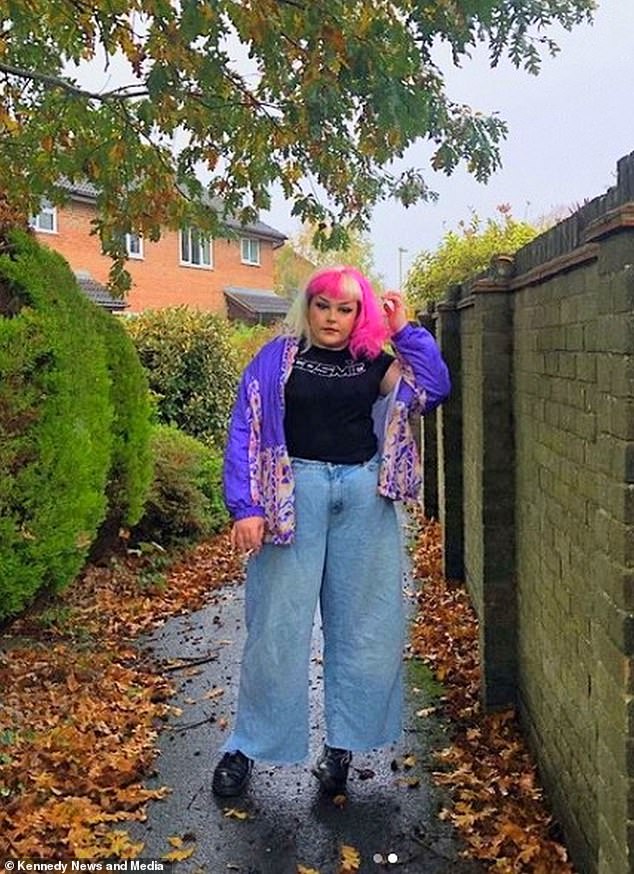 The teen admitted she used to struggle with depression and anxiety surrounding her body image but said hormone blockers helped. Pictured now

‘That’s what they helped me with at Tavistock. They were amazing.

‘I struggled a lot with gender dysphoria, I still do, very badly, but having the anxiety that I’d develop into a boy was a massive issue of mine.

‘Things were moved along a little quicker for me because I was at danger with my mental health.

‘At the time I was really, really struggling with depression and anxiety surrounding my body image. It was very distressing.

‘That’s immensely improved since starting hormone blockers – I can’t imagine my life without them now. It’s really helped me.

‘I’ve now been on them for coming up to two years. 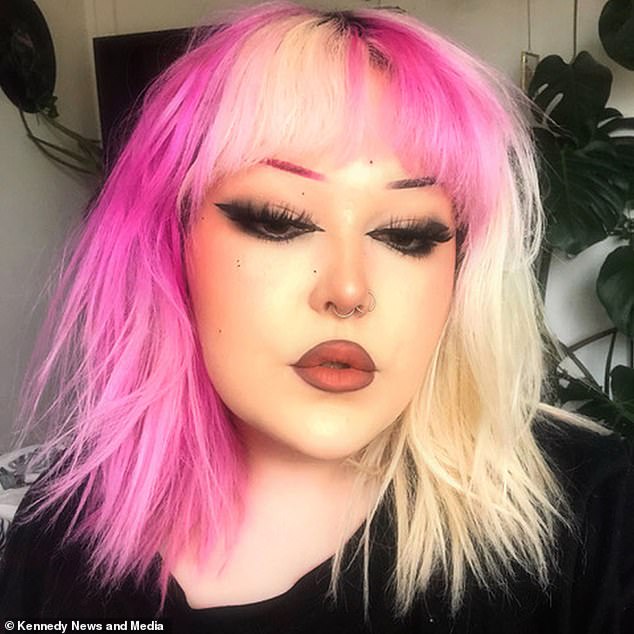 Aria now. She admitted that gender dysphoria affected her daily life to the point she could not wash or change clothes because she felt uncomfortable about her body 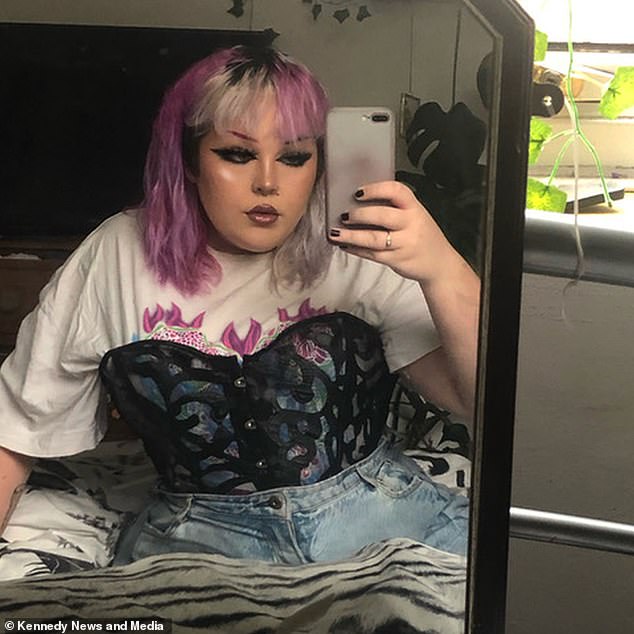 Aria, pictured now, said she hoped to use plastic surgery to accentuate her more feminine features in the future 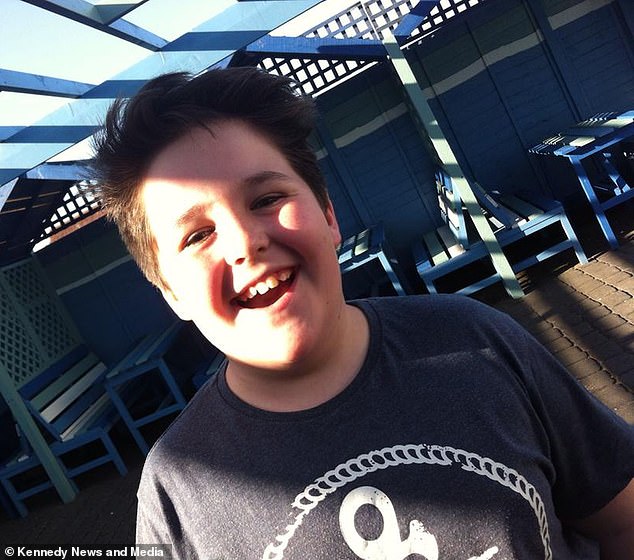 Pictured: Aria before her transition began. She explained she now felt one step closer to fully being who she was

‘Dysphoria [affects] my daily life, sometimes even affecting my ability to change my clothes or wash myself fully without immense discomfort.

‘Currently, my main source of dysphoria is my genitalia. I have practiced and been advised [of] all sorts of coping mechanisms and while they help, nothing fully gets rid of it.’

By blocking the natural process of puberty, Aria had overcome the next biological hurdle her body threw at her.

She has since began working with Gender GP, a transgender health and wellbeing service, who will help her start hormone replacement therapy.

Along with the costs of using the service, Aria is now weighing up her options for top and bottom surgery, admitting kind donations will cut her excruciating waiting time significantly.

Aria said: ‘I’ve started to go privately with a service called Gender GP. That’s costing a lot of money and I’m hoping to use some of the money from the GoFundMe to pay for the oestrogen [HRT].

‘It’s vital for me – for my mental and physical health. I have been thinking about whether I should wait it out on the NHS [for bottom surgery], which is why the GoFundMe is called “transgender medical expenses”.

What is gender dysphoria?

Gender Dysphoria is the feeling that gender identity and biological sex don’t match. –

Signs of gender dysphoria include depression and anxiety, low self-esteem, withdrawal, self-neglect and a strong desire to hide physical signs of biological sex, such as breasts or facial hair.

Treatment can include therapy, hormonal treatment and surgery. – In 2018/19, around 8,000 people were referred to adult gender dysphoria services in England.

‘I’m not 100 per cent sure whether to use the money raised for top or bottom surgery yet, or both.

‘I use the term ‘facial feminisation’ [on my page] quite loosely. I feel that the stereotypical [procedure] is hugely in depth but I want more cosmetic procedures that’ll enhance the features I have.

‘I don’t want a rhinoplasty and my whole face shaved down, but I want fillers to enhance the feminine features of my face.

‘Starting [HRT] will have a lot of physical effects which will help me. My body shape, face shape, my mindset [will change].

‘I’ll go through female puberty – without the periods.

‘The top surgery is implants. Breast augmentation isn’t offered on the NHS at the moment for transgender people because it’s seen as purely cosmetic.

‘That’s the physical aspect. It’ll also help me a lot with my mental health and knowing I’m one step closer to being who I am.’

You can donate to Aria’s page here