Victorian Treasurer Tim Pallas has revealed he feels a sense of “schadenfreude” about the federal government’s failure to legislate its national wage theft laws.

Mr Pallas said the federal bill, which included penalties of up to four years’ jail for the worst cases of wage theft compared to Victoria’s 10 years, would probably have overridden his state’s laws. 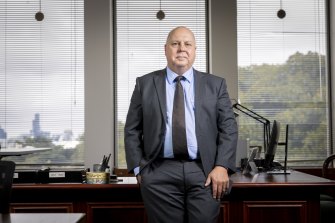 “It’s sort of a case of schadenfreude, I suppose … I think what they were attempting to do was to water down the effectiveness of the [state] proposals,” said Mr Pallas, who is also Industrial Relations Minister.

Had the federal government’s bill, which required a higher standard of “systematic” rather than just “dishonest” underpayment of workers to trigger a prosecution, became law, Mr Pallas argued fewer cases would have been brought.

“That has a profound effect by undermining the deterrent effect of the legislation,” he said.

And he said the Wage Inspectorate Victoria, which will pursue wage theft cases under the state laws, could go after employers that had already been targeted by the national Fair Work Ombudsman.

“If there is an initial proceeding by the Fair Work Ombudsman, we would wait to see how that matter plays out but we would reserve our right to exercise or enforce the authority of the state [wage theft law],” Mr Pallas said.

That has triggered concerns from Victoria’s peak business body that firms will be exposed to overlapping systems.

“We do not want two systems running because that makes life more difficult for Victorian businesses and would be a disincentive to operate a business and create jobs in Victoria,” Victorian Chamber of Commerce and Industry chief executive Paul Guerra said. “We’d like to see a stronger focus on making it easier, not more difficult, to run a business in this state.”

Unlike the inspectorate, which can recommend criminal cases, the ombudsman can only pursue civil penalties. Ombudsman Sandra Parker told Senate estimates last month her organisation had not been approached by its Victorian equivalent about how the two could co-operate.

Queensland has also criminalised wage theft while NSW has beefed up tax laws to tackle the issue and the Morrison government has signalled it could revisit its wage theft plans.

Mr Pallas said Victoria’s laws were focused on ensuring businesses understood and followed their legal obligations. “This is not a process of shoot first and ask questions later,” he said.

The Victorian government’s criminal penalties were the first in Australia when they passed its Parliament last year but only come into effect in July to tackle what accounting firm PwC has estimated is the $1.35 billion underpayment of workers around the country annually.

The federal government dumped most of its planned industrial overhaul, including the wage theft component, after it failed to win enough Senate support to pass the laws as a combined package in March.

A spokesman for federal Industrial Relations Minister Michaelia Cash defended the government’s record on tackling underpayment issues, pointing to the record $123 million in wages the Fair Work Ombudsman recovered for workers in 2019-20.

The spokesman blamed Labor for opposing the government’s industrial overhaul, which included the wage theft component.

“The government will continue to work with the crossbench to pass this legislation,” he said.

Mr Pallas said there should be national regulation of wage theft but only if it was much stronger than the Morrison government’s initial proposal.

“I think they need to take the failure of the bill to pass as a salutary message, not only from the Senate majority but also from the community at large, that if you’re going to do this, you need to do it properly,” he said.