Frances O’Connor’s Emily Bronte biopic isn’t much interested in answering the questions: what, when, where and why. It assumes we already know so much about the Brontes and their work that she can jump straight into their story without the usual preliminaries. 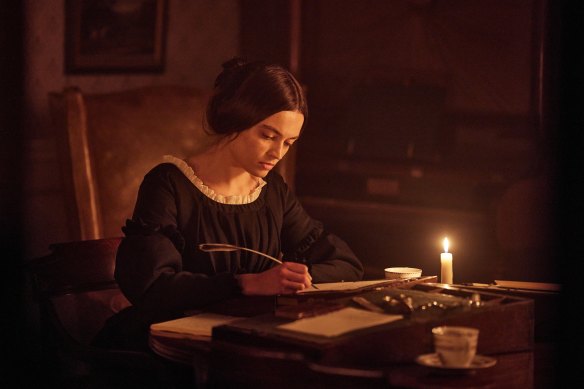 She awards her a passionate affair with William Weightman, said to have been the only personable young man among the succession of curates who arrived at Haworth vicarage to work with the sisters’ father. And if you can set aside the thought this theory is not backed up by any evidence, it has a lot going for it.

This is the way you hope things might have been for Emily simply because it makes her more human. Rather than being an ethereal character entirely caught up in the realms of her own imagination, it puts her in touch with the world the rest of us inhabit.

The film is O’Connor’s debut as a director but her career as an actor has given her good instincts when it comes to casting. As Emily she’s chosen Sex Education’s Emma Mackey, who has proved to be a natural when playing somebody whose flair for asking awkward questions marks her as an outsider indifferent to public opinion.

Her sisters love her but don’t really understand her and the film opens towards the end of her short life as Charlotte (Alexandra Dowling) is heatedly telling her she finds Wuthering Heights a shocking book full of reprehensible people.

From there, the script flashes back to the arrival of Weightman (Oliver Jackson-Cohen), whose looks and charm attract both Charlotte and the third sister, Anne (Amelia Gething). He’s an enthusiastic flirt but as he gets to know Emily, she’s the one who fascinates him and they start meeting in secret.

O’Connor has done well in conjuring up the emotional imperatives running beneath the proprieties of what is supposed to be a conventional 19th century household. There are plausible glimpses of the suppressed rivalry between the sisters and everybody worries about Branwell (Fionn Whitehead), whose recklessness makes him the most likely model for Wuthering Heights’ tortured hero.

None of this would work if Mackey had not been able to summon up the ferocious need for self-expression that brought Emily’s poetry and fiction into being. It’s not easy to portray a writer. It’s hardly the most dramatic of occupations. But there’s a febrile watchfulness in her performance that seems just right.

Emily is in cinemas from January 12.

A cultural guide to going out and loving your city. Sign up to our Culture Fix newsletter here.