A blogger who lost nearly four stone, through eating healthy food, has encouraged her followers not to worry about having a ‘flat tummy’.

Libby Faulkner, 24,from Lancashire went from weighing 15st 3.5 to a slender 11st 6, after joining her local Slimming World group, and documented her journey on her Instagram, which now boasts  over 8,000 followers.

The Digital Marketing Manager, who went from a size 16 to a size to a size 10, told how since her weight loss, she’s been been bombarded with messages from followers asking how she achieved her ‘flat tummy’.

Yesterday, in a candid selfie, the blogger revealed how ‘everything looks different standing up’ and now says she won’t ‘waste life’ worrying about the perfect figure. 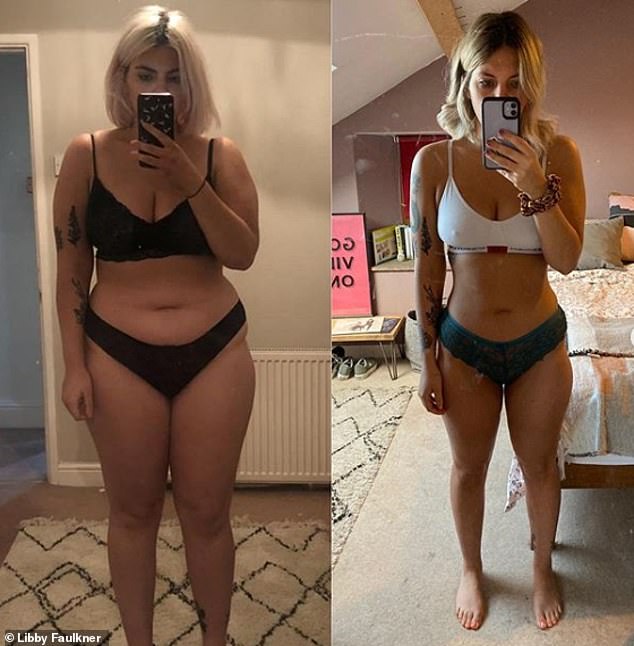 Libby Faulkner, 24,from Lancashire transformed from weighing 15st 3.5 to a slender 11st 6, after joining her local Slimming World group 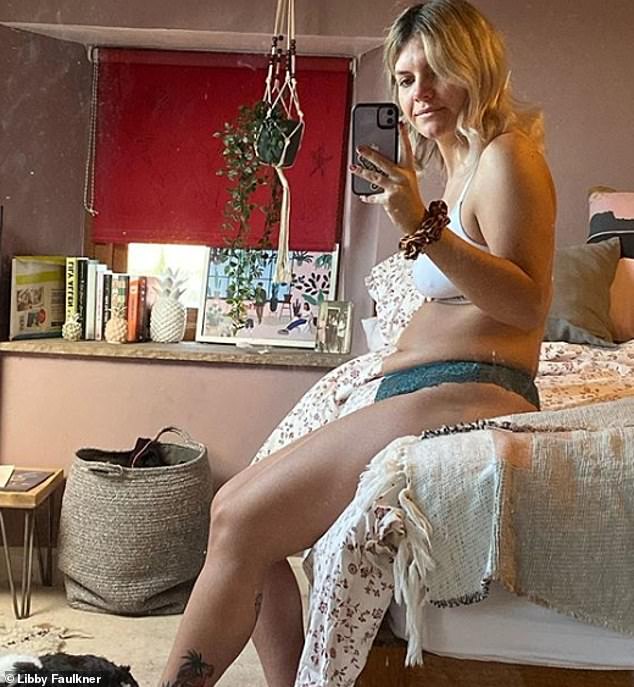 Yesterday, in a candid selfie, the blogger revealed how ‘everything looks different standing up’ and now says she won’t ‘waste life’ worrying about the perfect figure

Speaking to FEMAIL, she said: ‘In terms of the post, my main reason for putting it up was because I get so many people messaging me about how you lose the fat at the bottom of your stomach.

‘The answer is you can’t ask certain areas of fat to go away,  so in some cases it never will.

‘As well I think people see the front on photos of me and think that I have a flat tummy when the reality is not the case at all.

‘Yes my stomach is a lot flatter than it was before I started losing weight, but it’s definitely not flat and that’s not a standard that we need to be desperate to achieve. 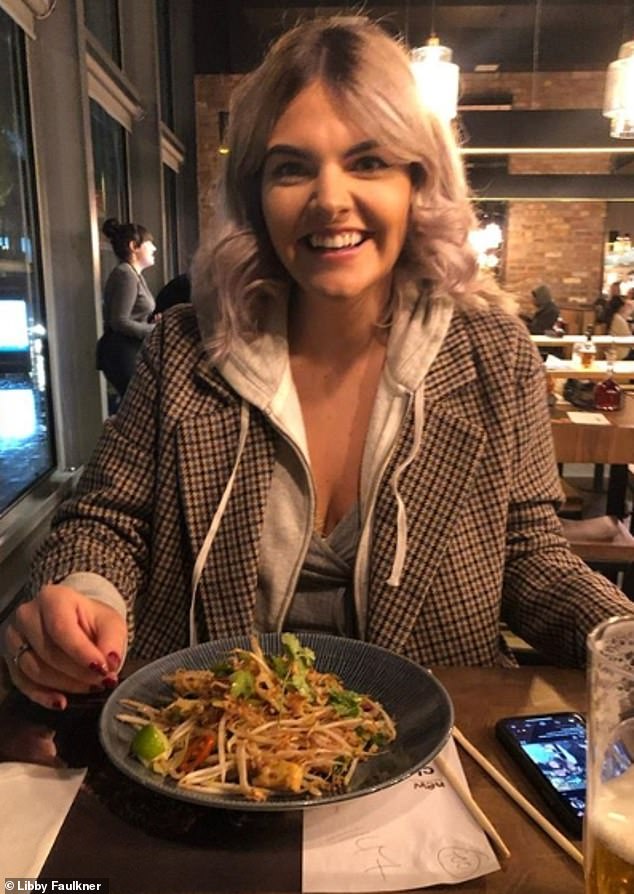 The Digital Marketing Manager went from a size 16 to a size to a size 10 through light exercise and healthy food, while still treating herself to the odd healthy meal out

‘I think as long as i’m living a healthy happy life then I’m not bothered about a bit of pudge at the bottom of my tummy!’

She went on to explain that although she now does weight training to tone up certain parts of her body, she won’t ‘waste time’ worrying about it.

‘I am now with a personal trainer and I go to the gym to work out I do weights which target certain areas of my body.

‘But if I never have a flat tummy, I’m not going to think my life was a waste – because there are more important things to worry about!’, said Libby.

Libby told that her weight crept up on her, while she was living on my own and working in a food hall, over indulging on pastries,takeaways and booze. 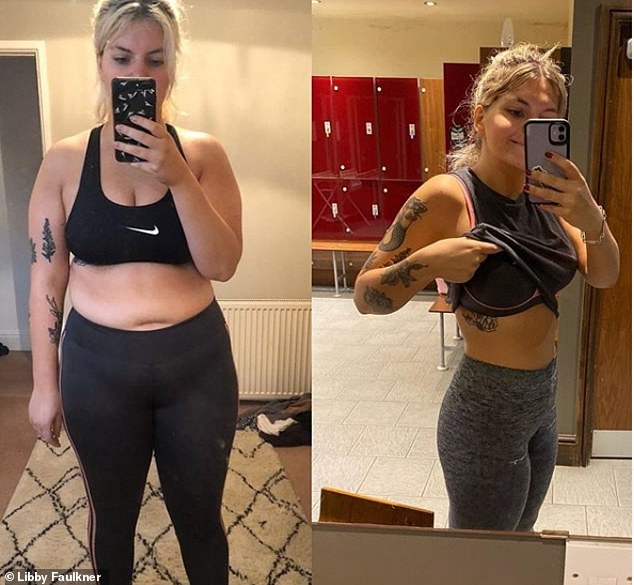 Although she now does weight training to tone up certain parts of her body, she won’t ‘waste time’ worrying about having the perfect figure 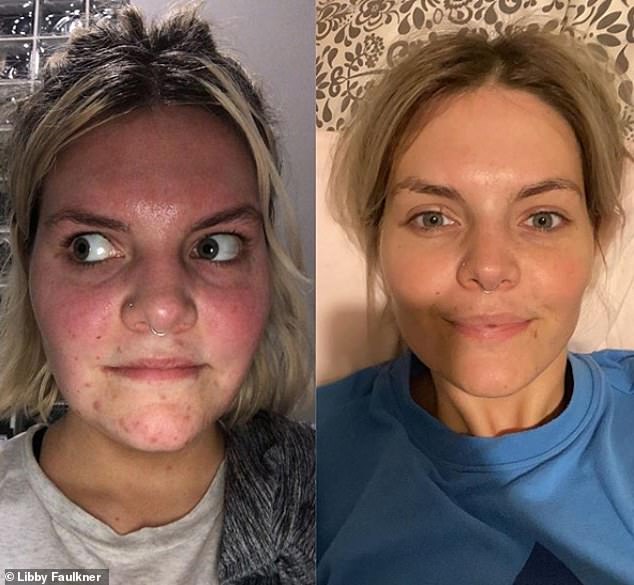 She said: ‘Throughout the day I was surrounded by pastries then at night living on my own I just started over indulging in everything.

‘I would get takeaways all the time I was going out drinking too much and then when I was hungover I would comfort eat and I did little to no exercise.

It came to a head when I ordered some clothes in a bigger size than usual thinking they would fit and they were all too small.

Libby’s diet – before and after

Lunch: Loaded toastie with crisps and a fizzy drink

‘I then started to realise how much weight I had actually gained – I had been hiding it from myself through editing all my pictures wearing loads of makeup and dying my hair.’

After joining her local weight loss group, which allows meals such as pasta, homemade fajitas and chili,ditching booze, and starting to do light exercise such as walking up a local hill, Libby soon shed over three stone.

She told that although she was never too concerned about her weight, it was only when she lost it she realised how much it had been holding her back.

Libby said: ‘I never felt obsessed with my weight and it was never something I even noticed until I look back and realise how unhappy it was actually making me, I would cancel plans because I didn’t feel like wanted to be seen out.

‘I stopped going on dates and was piling on so much makeup everyday to hide the bad skin I had from all the crap I was eating.

‘Now my skin has cleared up I’ve gone back to loving wearing makeup instead of using it as a mask.’ 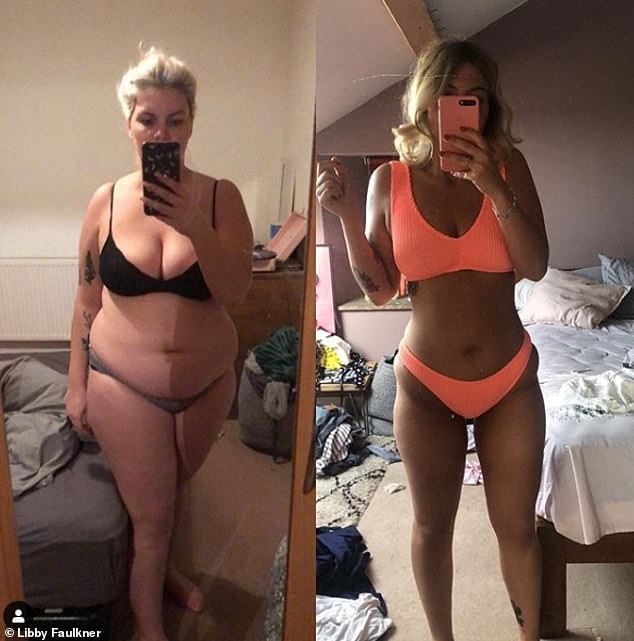 Libby told that her weight crept up on her, while she was living on my own and working in a food hall, over indulging on pastries,takeaways and booze 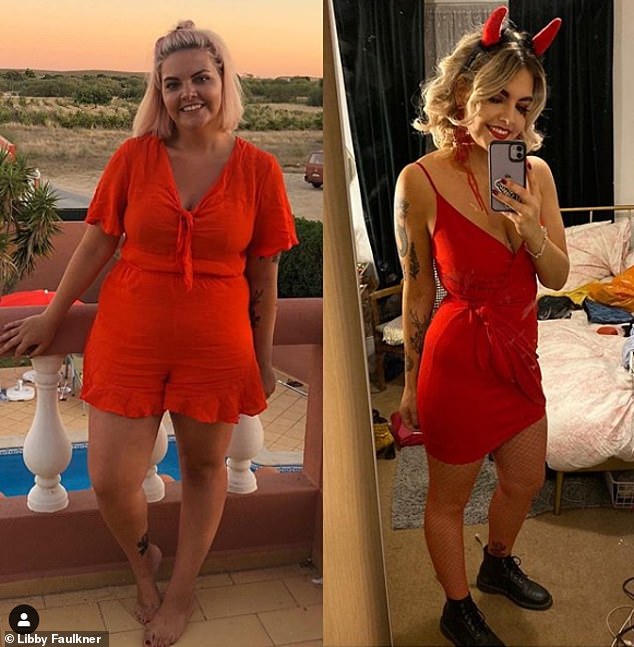 Now, she eats nutritious foods such as eggs, homemade fajitas and vegetarian chili

She continued to explain that she feels healthier in herself, and has began to allow herself treats as part of a healthy and balanced diet.

‘It’s really not about how I look but more about how I feel – i’m confident and happy and I’ve gained new skills in cooking, hiking as well as an amazing community on my Instagram account.’, she said.

Libby continued: ‘After the first 6 months I changed my structure to make myself a bit more flexible . 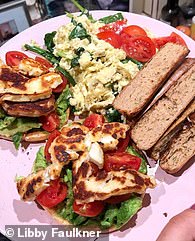 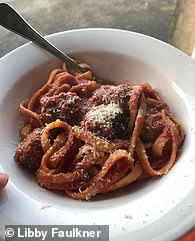 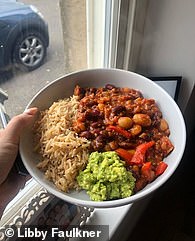 After joining her local weight loss group, ditching booze, and starting to do light exercise such as walking up a local hill, Libby soon shed over three stone

‘I started going out and drinking again allowed myself more treats and just fit it all into a healthy plan.’

‘I have been on 5 holidays this year and I have been ‘off plan’ or eating what I want for all of them and it hasn’t meant I’ve gained 3 stone back .

‘You might gain a few lbs but they are easily lost when you get back to your healthy eating.’