Home » Lifestyle » What does YOUR font choice say about you?

What does YOUR favourite font say about you? Psychologist reveals how people who use Arial are ‘stable and reliable’ while fans of Calibri are ‘boring and lazy’

In the everyday hustle of working online, the fonts we use in documents and emails aren’t given a second thought.

But your favourite font could speak volumes about your personality, according to a UK-based psychologist.

Researchers at Cartridgesave.co.uk surveyed 2,468 participants who were asked about the font they use the most within digital documents and discourse.

They then partnered with Psychologist and Wellbeing Consultant Lee Chambers, who analysed the data and revealed the traits most closely associated with each font type.

So, from Century Gothic, Arial to Calibri, what does your go-to style really say about you? 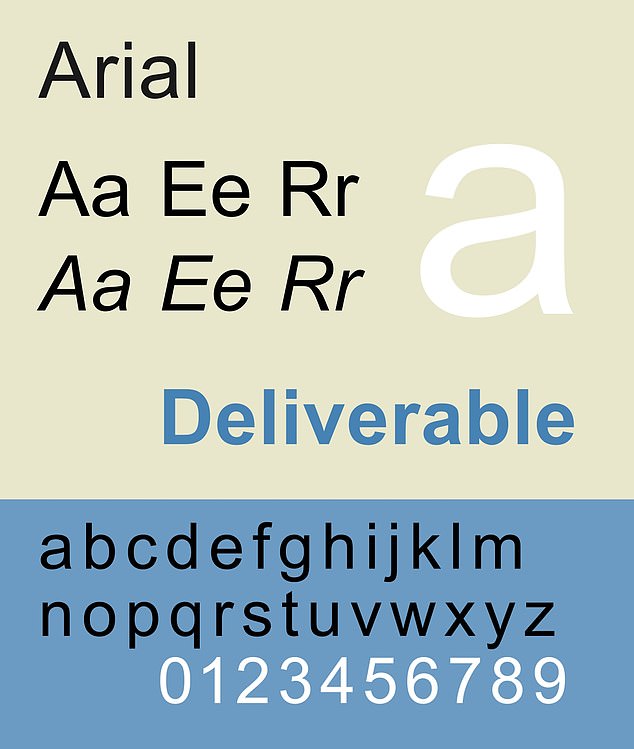 According to Lee, Arial users ‘appreciate simplicity and stability and are likely to be reliable even in a crisis.’ Pictured, stock image

The most popular font in the UK is Arial, with 53% of the nation opting for the neat type. So, why is this font so popular?

Lee Chambers explains: ‘Arial users appreciate simplicity and stability and are likely to be reliable even in a crisis.’

‘At the same time, they are not likely to let their imagination run loose too often. Because Arial is everywhere, people who use it are likely to feel like they want to fit in and not stand out from the crowd.’

According to psychologist and Wellbeing Consultant Lee, Paprika users are ‘willing to be courageous and make a statement.’

With just 5% of the nation choosing this type of font, it’s by no means the most popular – but that doesn’t mean it’s not telling of its users.

‘They are flexible and creative,’ says Lee. ‘They’re easily excited but the most likely to be late for a meeting.’

‘Its users are likely to be kind and friendly as an expressive font, and it strikes a balance between silly and serious.’ 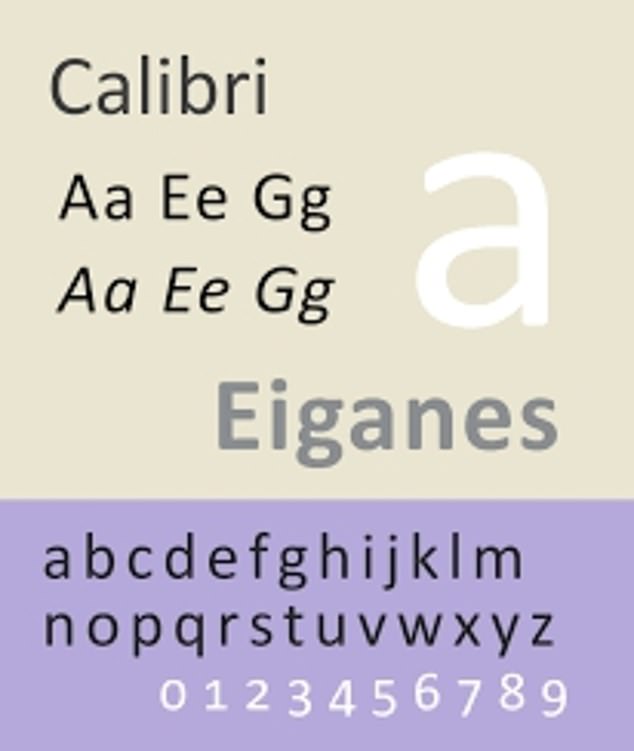 The second most popular font in the UK is Calibri, with users valuing efficiency and trust in the default,’ according to Lee. Pictured, stock image

The second most popular font in the UK is Calibri, with an impressive 38% of respondents saying they use this font almost every day.

‘Calibri users value efficiency and trust in the default,’ explains Lee. ‘They are likely to be less bothered by what others think.

‘They may be a little boring, or a bit lazy, or not enjoy expressing themselves as individuals.’

‘With Calibri now being popular, it’s a very safe and universal choice, and it’s users are highly unlikely to take risks in life.’

Comfortaa may not be a font name that springs to mind, but it’s still the go-to font for 12% of the nation.

‘Comfortaa users have an appreciation for shapes and are likely to enjoy time in nature,’ explains Lee.

He goes on to explain how users of this font are not ones to confirm to the more traditional.

‘They are likely to be blazing a trail outside of their comfort zones, despite the suggestion of the font they have chosen,’ he says. ‘Often referred to as a cute font, the whole typeface feels very rounded, and this conveys an individual who is also likely to be an all-rounder, rather than a specialist.’ 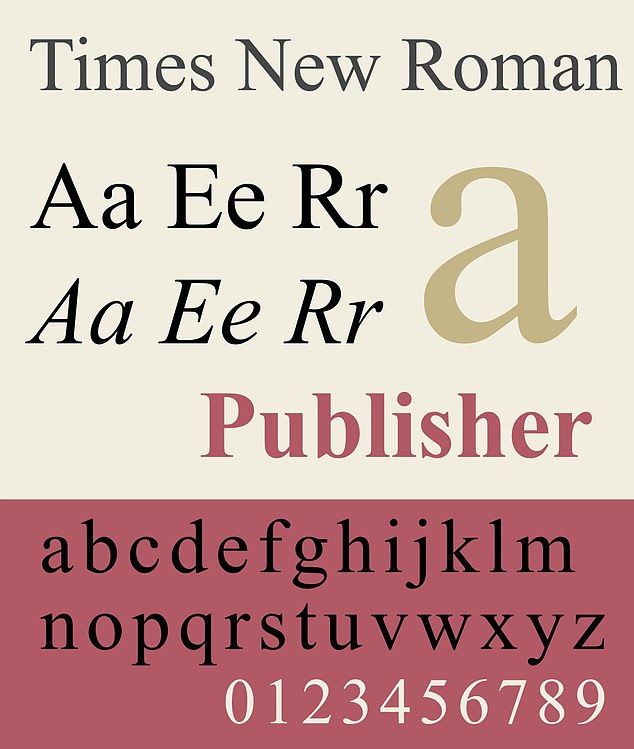 People who choose Times New Roman as their font of choice as ‘conformist, polite and practical,’ according to Lee. Pictured, stock image

With 31% of the nation having Times New Roman has their font of choice, expert Lee describes its users as ‘conformist, polite and practical.’

He continues: ‘They will also appreciate the nostalgia and be reflective of the past, and don’t like change or evolution.’

‘However, as Times New Roman has started to disappear, it could suggest that a more straightforward and slower pace of life is preferable for users when compared to an increasingly dynamic and fast-paced society.’ 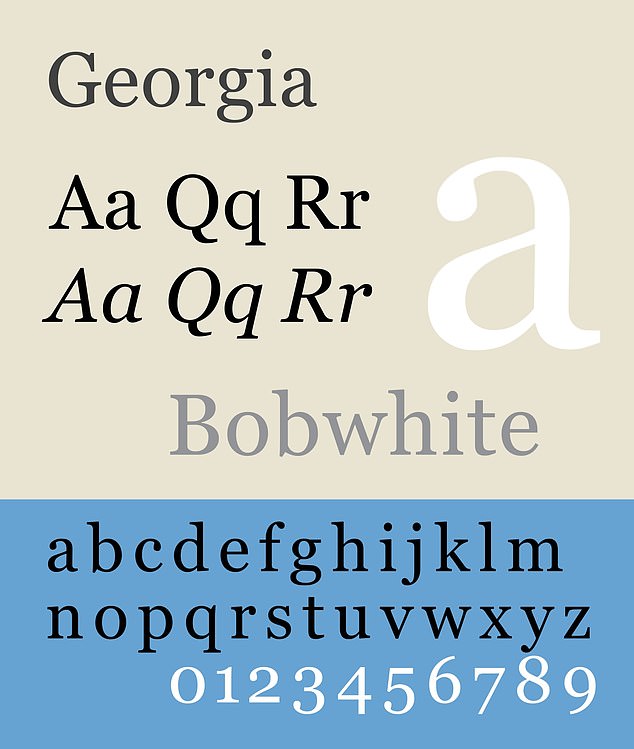 Those who opt for Georgia as their go-to font of choice are ‘practical and likely to be mature,’ Lee says. Pictured, stock image

A respectable 25% of the UK have made Georgia their go-to font of choice when it comes to work.

According to Lee, this font type is particularly telling of its users, who are ‘practical and likely to be mature.’

He adds that they tend to value elements of formality and elegance and are also likely to be ‘honest and convey credibility.’

‘As a font, it is undoubtedly aspirational, and this will no doubt shine through in those who use it. And those with an eye for style will value how it gracefully flows when we see it.’ 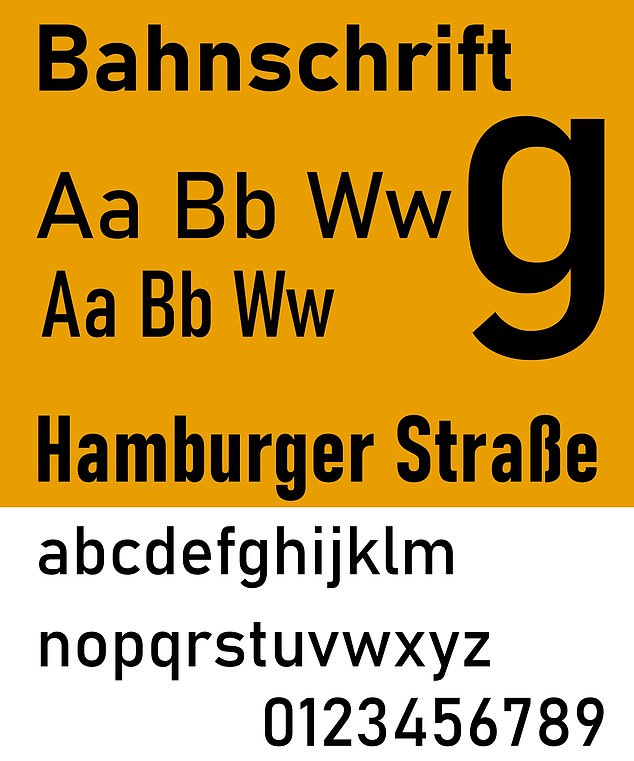 According to Lee, Bahnschrift users are ‘clinical by nature.’ Pictured, stock image

The Psychologist and Wellbeing Consultant explains that Bahnschrift users are ‘clinical by nature.’

Taking first place for 21% of the UK, he goes on to say that Bahnschrift fans ‘appreciate clarity’ and as a result, do not appreciate things being ‘overly complex.’

He adds: ‘It is likely they are tidy and don’t enjoy clutter or chaos. Because it is such a new font, those who use it are on the cutting edge, making a statement about the benefits of being agile, and are likely fans of the minimalism movement.’

With 14% of the nation prioritising Lato over any other front, Lee describes its users as ‘modern’ who ’embrace change without trying too hard.’

He goes on to say they are likely to know their own mind and are able to express themselves in an ‘assured way.’

He adds: ‘They tend not to be the most innovative but show glimpses of flair in their everyday lives.’

‘With Lato becoming mainstream, it has a rounded warmth with undertones of stability, signalling a user with a blended personality.’ 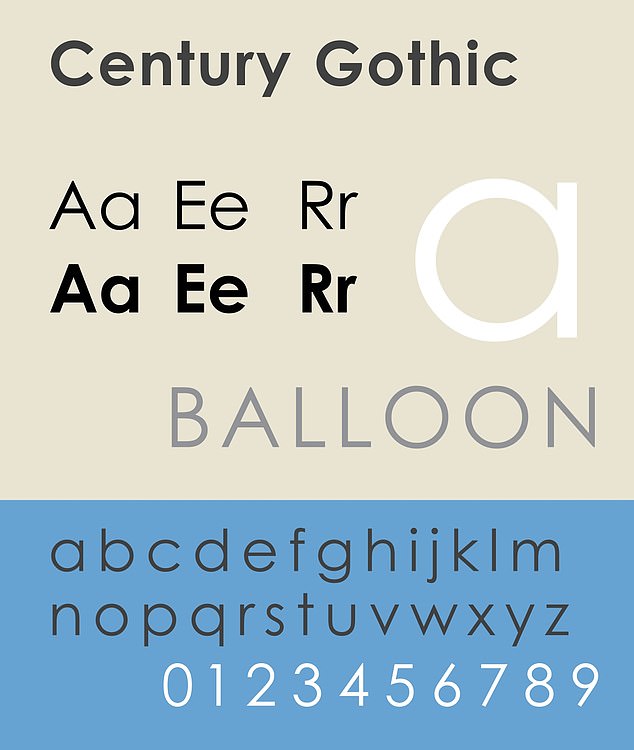 Lee explains that Century Gothic users are likely to be ‘happy and sincere by nature.’ Pictured, stock image

Century Gothic is the font of choice of 19% of the population.

‘Such users are likely to be happy and sincere by nature,’ explains Lee. ‘Sticking to a font that doesn’t vary too much from standard, but having a hint of personal expression in their choice.’

‘Those who use it are likely to enjoy learning, as its clean design is often used in educational settings.’

Abril Fatface is used by just 7% of the nation, with users often as bold as the font they utilise, according to Lee.

He adds: ‘There is a high chance they will be assertive, direct and ambitious, but are unlikely to be the best listener or the most empathetic.’

‘As a font that takes cues from classic styles, it demands a certain gravitas and presence, and those who use it are likely to want to appear sophisticated.’