Home » Lifestyle » What will 70 per cent vaccination coverage mean for Australia?

Getting 70 per cent of the eligible population vaccinated should not be difficult over the next few months. But preventing ongoing, crippling lockdowns will be a bigger challenge.

That will rely on near-perfect handling of any increases in coronavirus cases, and as other countries show, vaccines are far from a panacea when it comes to the highly transmissible Delta variant. 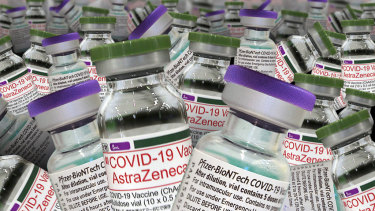 Australia has data and goals now for vaccinations. Credit:

The government last week fleshed out its four-phase road map towards COVID-19 normal, based on Doherty Institute modelling that found restrictions could start being wound back once 70 per cent of eligible Australians – or some 14.4 million of the 20 million Australians over 16 – had received two vaccine doses.

Prime Minister Scott Morrison has said he is confident of achieving this milestone in coming months.

“We are going to be able, I believe, before we get to the end of this year, based on what is being achieved and what I’ve seen from Australians, to get where we want to go,” he told reporters on Tuesday.

Hitting the 70 per cent target would shift Australia from the initial “suppression” phase of the roadmap to the “transition” phase, with eased restrictions on vaccinated people, caps lifted on international returns and fewer lockdowns.

But this hinges on the assumption that 70 per cent coverage is enough to prevent the highly transmissible Delta variant from getting out of health authorities’ control.

The Doherty modelling shows “optimal” testing, tracing, isolating and quarantine systems – as NSW had during its Christmas outbreaks – is key to staying open. With partially optimal measures, modelled on those seen in Victoria during its August outbreak, lockdowns become more likely.

In NSW, which reported a record 319 cases on Saturday and 283 on Monday, those systems have begun to slip. Premier Gladys Berejiklian acknowledged reports of people waiting up to a week to find out they had attended an exposure site and needed to isolate but said those cases were exceptions to the state’s strong contact tracing.

“If we need further resources we will make sure it happens, but there is no doubt that the more cases you have, the more the challenge,” she said on Friday.

The state has requested assistance with contact tracing, and its testing capability has been stretched. So far, 46.2 per cent of NSW’s eligible population has received one dose and 23 per cent has had two.

Australia-wide, 44 per cent of the eligible population has received one dose and 22.5 per cent is fully vaccinated.

Vaccination rates are still well below the percentages modelled by Doherty to prevent ongoing lockdowns, but the experience overseas shows there may be no magic number.

Israel has been one of the most successful countries so far on the vaccination front, with about 62 per cent of its population fully immunised.

But that has not stopped a large increase in cases. Israel dropped almost all public health measures in June, when 60 per cent of the population was covered by one dose and coronavirus cases were in the single digits. Cases began to pick up later that month and have now swelled to well over 2500 a day, according to Our World in Data, leading the nation to reinstate some public health measures.

In Canada, 72 per cent of the population is covered by at least one dose. Cases there dropped dramatically from highs in the 8000s in April and May to fewer than 500 a day in June and July, but have again begun to rise.

Australia’s initial target of vaccinating 70 per cent of eligible over 16s means 56 per cent of the total population will be covered, which the modelling shows will inevitably lead to a rise in cases. The question is how long the country’s protective measures would be able to withstand the strain before a lockdown was needed.

The Doherty modelling forecasts the 70 per cent target will be reached by the start of November, and 80 per cent coverage before the end of that month, triggering a further easing of restrictions.

But Health Minister Greg Hunt did not want to play that guessing game last week.

“In terms of the 70 and 80 per cent targets, that’s a challenge for all of us, so we’re not putting a time frame on that,” he told reporters last Monday. “The goal that we’re setting is to ensure that every Australian who seeks to be vaccinated can be vaccinated this year.”

The rollout was bolstered on Monday with news the medical regulator had approved Moderna’s vaccine, with the first million doses to arrive next month. But while CSL is producing 1 million doses of the AstraZeneca vaccine a week in Melbourne, and shipments of Pfizer have continued to increase, the deliveries are not set in stone.

As one public health expert noted recently, the only certainty in this pandemic is uncertainty.

All this suggests lockdowns and restrictions will continue for some time.