Home » Lifestyle » Why I won't let my parents change a thing in my childhood bedroom!

Why I won’t let my parents change a thing in my childhood bedroom! ANTONIA HOYLE, 44, says hands off my Bon Jovi poster, mix tapes and battered Judy Blumes

Sitting in my bedroom, I am transported back to a time when Roxette ruled the charts, boob tubes were en vogue, and if we wanted to get in touch we wrote letters rather than WhatsApped.

I say my bedroom, but it doesn’t technically belong to me, as much as I like to pretend otherwise. It’s the room where I grew up in my parents’ house, which I moved out of 25 years ago.

Not that you’d know it from the possessions bursting from every drawer. The Bananarama video, mountains of faded and mostly longsince-folded magazines and Madonna cassettes alone reveal that not only is there a teenager in residence, but that she’s stuck in 1991; the yellowed photos in frames, albums and on my noticeboard suggest that girl is me.

Which is exactly how I like it. At 44, with two children of my own, my childhood bedroom remains a sanctuary I can step into and forget about the humdrum realities of middle age, somewhere I feel cocooned and connected to my youth. 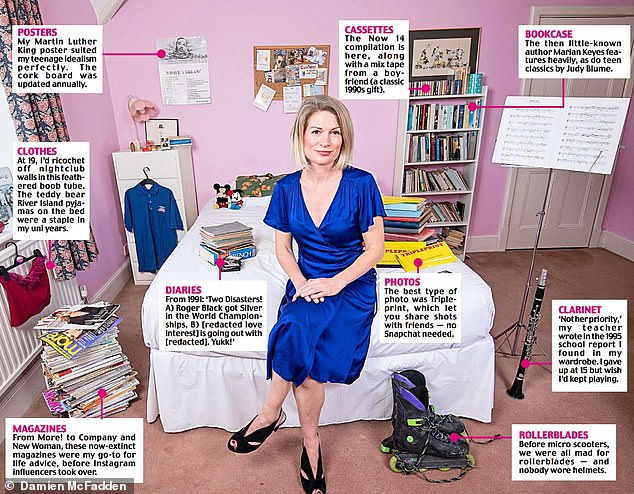 UK-based writer Antonia Hoyle, 44, (pictured) moved out her parents house 25 years ago. She left her bedroom exactly how it was when she was teenager in 1997

The idea of anyone else inhabiting this space makes me feel affronted. It’s an oasis of calm, a sea of nostalgia, a swathe of abandoned adolescent fashion… and a source of never-ending contention with my exasperated parents, who have been asking me to clear out the blessed room since I started university in Edinburgh and acquired cupboard space of my own.

After extensive redecoration, this is the last space left to overhaul in the Lincolnshire farmhouse where they have lived since I was two, its airy dimensions making it an ideal guest room. Yet my clutter curtails them.

‘Can you not at least clear some drawers for visitors?’, they ask, every few years, as my own home has moved from Scotland to London and, four years ago, back to within six miles of theirs.

What’s so important that I’ve kept it, seemingly untouched, for decades? And, as Mum put it slightly more forcefully this week, ‘Is your life so busy you are happy to leave your detritus to your aged parents?’

If you think I sound selfish, spoilt and entitled, you’re absolutely right, but while their pleas may have fallen on deaf ears, I’m not the only grown-up resisting the pressure to remove their presence from their childhood bedrooms.

This week, research revealed four out of ten adults had banned their parents from removing faded posters of childhood heroes from their bedroom walls, with 53 per cent of parents embarrassed by guests’ reactions as a result. 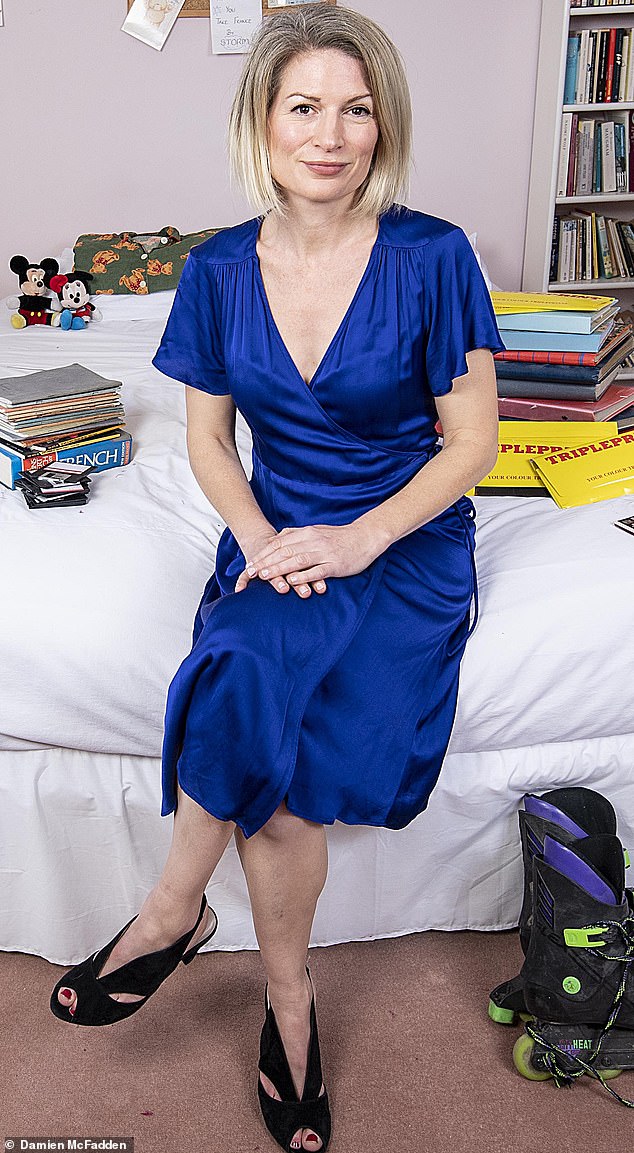 Antonia describes her room as an oasis of calm, a sea of nostalgia, a swathe of abandoned adolescent fashion, and a source of contention with her parent

Fifty seven per cent of those responding to the study by Argos still have a bedroom in their parental home, with two-thirds saying it hasn’t changed since childhood.

That the majority of respondents were in their fifth decade like me, seems unlikely, however, while my hallowed poster is not of an ageing pop star but a cheesy picture of Martin Luther King’s head emerging from a cloud above the text of his ‘I Have A Dream’ speech.

It has graced my pink-painted walls since 1990, when, after a family holiday to America, I developed an obsession with the country’s Civil Rights movement. Not that my parents took umbrage with the poster itself, nor the noticeboard or the painting of my initials that also remain, so much as the mountains of personal affairs cluttering up my (sorry, their) drawers.

‘I sometimes think you just walked away leaving us your accumulated junk,’ says Dad.

Junk? These are irreplaceable artefacts, invaluable mementoes, I think, as I embark on a mission to see exactly what lurks in the depths of my drawers…

Hmmm, OK. Unearthing two sachets of yellowing Boots Soltan suncream in a now positively reckless SPF15, a half-empty bottle of Body Shop Moonflower body lotion and a pair of hair crimpers, I admit not everything is priceless.

Nor are the 28 tapes containing classics from my 1990s icons Belinda Carlisle, Prince and Cher necessarily that useful when I haven’t seen a cassette player for two decades.

If I tried to race on the rollerblades that were the height of fashion in my late teens and have been living in my wardrobe ever since, I’d probably put my back out, and were I to enjoy Thelma & Louise — still my favourite film — I would stream it online rather than watching my video from 1992.

Yet they feel no less sentimental than the piles of diaries I come across in which I bemoan that no boys like me, worry endlessly that I am a bore, and obsess over the chances of sprinter Carl Lewis (an unusual 90s crush) winning the 100m final.

After I moved out, my parents swapped my two single beds for a double and I must have agreed to lose the pop stars from the walls at some stage — the only remnant is a torn-out magazine picture of Jon Bon Jovi on my noticeboard.

Yet the integral reminders of my childhood remained, becoming ever harder to discard after I became a mother myself. In my biology school exercise books from when I was 11, the same age as my daughter Rosie is now, a skeletal dried flower sits aside my diagram of pollination.

I am given an A+ for a story about a fire in English, which I vaguely remember writing. I think about how I chastise Rosie for refusing to throw away her own old school work because she feels attached to it, and cringe.

From a ring-bound folder entitled ‘Reasons Not To Panic About A Levels’ written for me by my first serious boyfriend, to a card saying ‘You’re beautiful’ from my second, along with piles of letters from pen pals and classmates, signed off with hearts and kisses, I’m reminded how lucky I was to grow up in an age before social media, when handwritten notes took more effort and felt so much more meaningful than Facebook messages.

‘We’re on the beach listening to Black Velvet!’ writes my best friend in girlish scrawl on the back of a postcard from Devon, aged 12, its innocent picture of seminaked bodies in the sea one that would nonetheless probably get her parents arrested nowadays.

Nostalgia is all well and good, says Mum, but surely now your house is bigger than ours you can sort out what you want to keep, and throw the rest away?

Yet here is the crux of the issue, I realise: if I move my childhood belongings, they become onedimensional souvenirs — it is only in situ, surrounded by the minutiae of my adolescence; my shells, scraps of paper and long-since defunct 50 pence pieces, that they come alive, and the link to my past remains.

Lying on my bed, I can vividly recall the games of swaps with my brother that would while away hours and the sleepovers with friends. I remember the afternoons I’d sit on the window sill reading magazines until my skin was burnt from the oil-powered radiator below. I remember feeling safe, and hopeful. The prospect of letting that go is painful.

‘This relationship we have with our bedroom is sacred,’ agrees Dipti Tait, psychotherapist and author of Planet Grief, who says this relationship often extends well into adulthood. ‘Once it is taken away from us, we can feel grief. Similar to a death, but more of a loss of custody, and in some cases a loss of identity.’

Aged 49, she recalls: ‘When I moved out of my childhood home, my mum gave my old bedroom to a lodger without telling me. When I found out he’d been living with her for a few months, it took ages for me to get over it. I literally felt violated, and she didn’t understand why I was upset.’

Of course, my parents have every right to be cross they’ve been lumbered with my rubbish. But what they perceive as laziness and disorganisation is, I think, as much fear of cutting ties with the past, which I have subconsciously tried to recreate in my present.

My husband always teases me that our every interior design decision seems to mimic my childhood home, but it is no coincidence that our bedroom walls are pink, our own curtains floral.

Yet I know deep down that trying to immortalise the place I grew up is unhealthy, and I am well past the point when I ought to move on. Which means promising to clear my possessions so my parents can finally go ahead with that redecoration.

They’ve assured me the walls will still be a shade of pink, and that the curtains, a semi-opaque texture that sent shards of light softly onto my bed at the start of every spring day, can stay.

Perhaps it is time for the orange squash stain on the carpet from when my friend spilt her drink when we were ten to go, I decide, packing a bin liner as a statement of intent. I put a picture of myself from my first day of school back in the drawer, though, for posterity.