Before memes existed, there was Guru Adrian, a young boy who dispelled wisdom via badges, stickers, and graffiti such as “having fun is half the fun” and “realise your real eyes”.

According to self-penned folklore, Guru Adrian discovered the secret of eternal youth in his science kit in 1664 and thus has always remained a nine-year-old boy.

Considering Guru Adrian claims to be more than 350 years old, it seems almost blasphemous to write he is about to celebrate his 40th birthday. 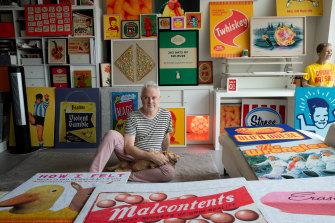 David Wales’ irreverent artwork earned him the title, The Warhol of Darlo.Credit:Janie Barrett

Guru Adrian was born from the imagination of Sydney artist David Art Wales after first appearing in the Triple J fanzine Alan as a comic strip in the early 1980s.

“I needed someone to give advice to the other characters, so I came up with this idea of a young boy called Adrian who preached advice about having fun,” Wales says. “Straight away he started getting fan mail. None of my other characters ever connected with an audience so quickly.”

Wales says that at the time there was a broad fascination with groups like The Moonies, The Scientologists and The Orange People, and Guru Adrian was a parody of these.

‘He was secular deity without any guilt or hidden agenda, he was the god of fun.’

“He started receiving mail from fans claiming to be his disciples, I think people really liked that he didn’t exist,” he says. “He was secular deity without any guilt or hidden agenda, he was the god of fun.”

When asked specifically where the photo originated from or who the boy in the photo is, Wales remains coy. 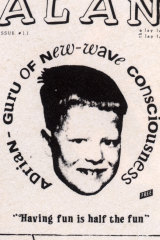 “I always get asked this question and I always answer, the photo is of you,” he says. “Guru Adrian represents us as optimised and enlightened human beings, who are able to see the fun in life.”

After spending 30 years in New York, Wales returned to Sydney in 2018. While most artists found their work drying up during the pandemic, Wales saw a spike in sales thanks to his COVID-inspired art.

“The first time I saw a picture of the COVID-19 molecule I assumed it was a photo taken through a microscope,” he said. “But it’s actually a rendering by illustrators hired to give the virus a face.

“In it, I saw an alien, a malevolent planet looming over us or a deceptively alluring weed or seed pod from an old botanical engraving. Once I started collaging the molecule into various scenarios, I couldn’t stop.”

Wales spent lockdown producing 80 limited edition felt prints for a range called “Going Viral” and showed them in the street-facing window of Redfern’s Duckrabbit gallery, with two red Xs on the ground to show viewers how to stand 1.5 metres apart.

For the official opening of the exhibition, only 10 guests were allowed in, each carrying pool noodles to keep them socially distanced.

“For many of us, this pandemic is the defining moment of our lives, as World Wars and the Great Depression were for our parents and grandparents,” Wales says. “A lot of people have said that they wanted a memento to remember this crazy time in our lives. It’s a fun way of remembering the pandemic that is not depressing.”

Since Wales returned to Sydney, he has seen Guru Adrian rise phoenix-like from the ashes as the returned messiah.

“In the 1980s we sold a lot of guru Adrian T-Shirts and then I moved to New York,” he says. “People kept asking me if they could buy a Guru Adrian T-shirt and I probably knocked back hundreds of sales as I wasn’t making the shirts anymore. But now it feels like the right time, I think the world needs Guru Adrian right now.”

TV, movies, Find out the next TV, streaming series and movies to add to your must-sees. Get The Watchlist delivered every Thursday.