The first big movie of 2023 is not a Marvel blockbuster, or an Oscars frontrunner, or some hastily revived franchise from your childhood. Instead, it’s a surreal, outlandish and highly memeable horror flick about a dancing killer doll that looks like a pre-teen girl. 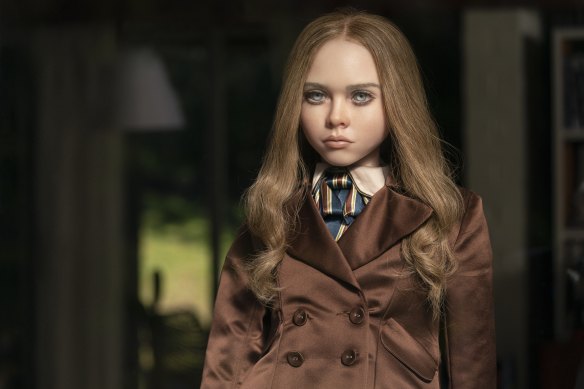 M3GAN, which hits Australian cinemas this Thursday, has been a surprise hit since it was released internationally last week. Made on a reported budget of $US12 million ($17.4 million), the film has earned $US45 million ($65 million) at the global box office in its opening weekend and given Avatar: The Way of Water – a film made for ten times that amount and propelled by a decade of hype – a run for the top spot in the US.

This success is also notable as early January can be a bit of a dead zone for new releases. According to US publication Variety, M3GAN is “the first movie to open to more than $30 million [domestically] in the first week of the new year in over a decade”.

Why does everyone love the dancing murder doll? Is M3GAN some kind of updated Chucky?

Pre-dated by the likes of Chucky and Annabelle, the titular M3GAN isn’t the first killer doll we’ve seen on screen. But, by all accounts, she’s a welcome (and slightly more sci-fi) newcomer to the genre.

Unlike the usual supernaturally possessed playmates, M3GAN is a humanoid robot – a “Model 3 Generative Android” – who becomes self-aware and intent on protecting her young owner at all costs. And, as the first trailer showed in October, she’s also kind of absurd.

She performs TikTok-style dance routines when approaching her prey and at one point hunts down a young boy while galloping through a forest on all fours like a dog.

You really just have to see it for yourself.

The film has great horror credentials – it’s written by Akela Cooper (Malignant) and produced by Jason Blum (Paranormal Activity, Us, The Black Phone) and Australian James Wan (Saw, The Conjuring) – but it’s this surreal comedy that built most of the hype for the film.

The dance sequence, in particular, instantly became a meme.

Oh, that dance is everywhere! It kind of seems like it was made to go viral.

The marketing for the film has certainly not been subtle. Early screenings and promotional events for the film have featured troupes of dead-eyed young women performing the routine, and the hashtag #megandancechallenge has more than 9.9 million views on TikTok.

But that doesn’t mean the hype is wholly cynical or manufactured. The film seems very much aware of how silly it can be, and these deliberately memeable moments are genuinely resonating with younger (and especially queer) audiences who appreciate absurd and campy content.

As one critic wrote for The Hollywood Reporter, M3GAN is “a horror film for the TikTok generation” – and that’s a good thing! It means the movie is dealing with issues relevant to its time (as all good horror films do) and also inviting younger viewers in to a genre that can often be obsessed with villains of decades past.

But is the film actually supposed to be any good?

Yes! M3GAN is currently sitting on 94 per cent fresh on Rotten Tomatoes.

Variety critic Owen Gleiberman has praised the film saying it’s not just “a movie about a killer doll who knows how to use a nail gun” but a “high-kitsch cautionary tale” with great wit and style. And Indiewire’s film editor Kate Erbland said the film was a perfect blend of camp, social satire and actual terror before ending her review with a one-word exclamation: “Oscars!”

Everyone agrees it’s also a film that’s best seen with other people. The joys of both the horror and the strange comedy are really enhanced by collectively experiencing it with a hundred or so other confused people in the theatre.

What I’m hearing is that M3GAN the killer doll is saving cinema.

Though the global box office is still struggling to rebound to pre-pandemic levels, horror flicks like this continue to punch above their weight! With low-budget, original films like Smile, Barbarian and The Black Phone all seeing massive success in 2022, it’s clear audiences will still turn out for a good scare – and M3GAN’s early box office taking is a good omen that trend will continue.

The next one to watch: Cocaine Bear, a similarly memeable horror-comedy about a murderous bear that does cocaine (out February 23). Whatever criticism you might have, 2023 movies are anything but boring.