Home » Lifestyle » Woman, 43, reveals how ex terrorised her after she dumped him

A woman has revealed how her controlling ex-boyfriend terrorised her after she dumped him.

Joanne Simpson, 43, from Cayton, Scarborough was in a relationship with Daniel Wood, also 43, for two years, and broke up with him after he continually accused her of cheating.

Daniel didn’t take the news lightly, and turned up at Joanne’s home drunk, calling her names, and rang and texted her hundreds of times a day begging her to take him back.

Joanne reported her ex to the police and he was convicted of harassment and jailed for 22 months.

Now, she’s speaking out to encourage others to leave their abusive partners. 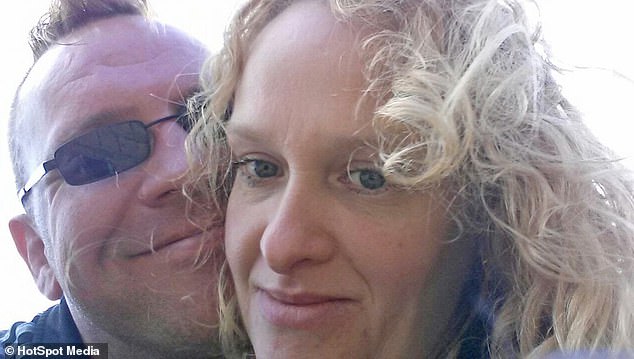 Joanne Simpson, 43, was in a relationship with Daniel Wood, also 43, for two years. After continuous cheating accusations by Daniel, Joanne dumped him

Joanne, who works in printing, said: ‘I should have seen the warning signs. Danny was so charming one minute and the next, he flipped and became a monster. He was like Jekyll and Hyde.

‘He was very full-on quite early on and I wished I’d realised. I’m just glad he was jailed.’

Joanne met Daniel in April 2014 in a Facebook group and said that at  first he ‘seemed very arrogant and sure of himself’.

‘But we started talking and he was actually really nice. I presumed I’d judged him too quickly, she recalled. 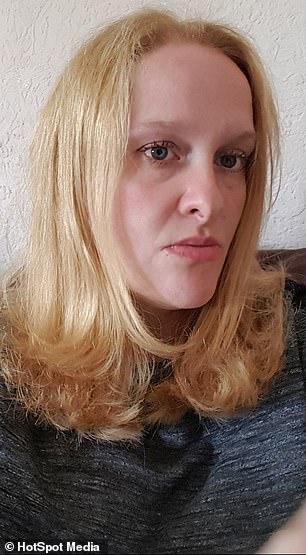 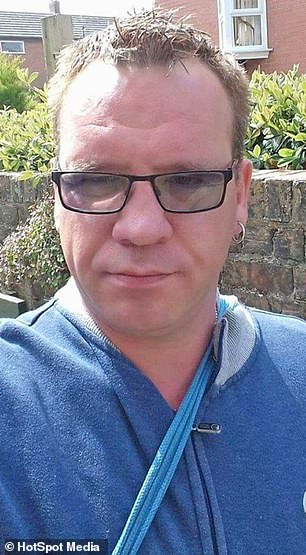 Joanne, from Cayton, Scarborough, met Daniel in April 2014 in a Facebook group. She says: ‘I should have seen the warning signs. Danny was so charming one minute and the next’

‘Danny was very complimentary of me, and always put me on a pedestal. He told me that he thought the world of me and it made me feel wonderful.

‘I really thought he was Prince Charming.’

After three months of chatting online, Daniel invited Joanne to visit him in Leeds, 70 miles away from her home.

‘I agreed to visit him and, because I’d travelled so far, I stayed at his for four days,’ Joanned said. ‘It was great, he cooked me dinner every night.

‘He told me that he’d never met anyone like me, and I realised that I was falling for him.’ 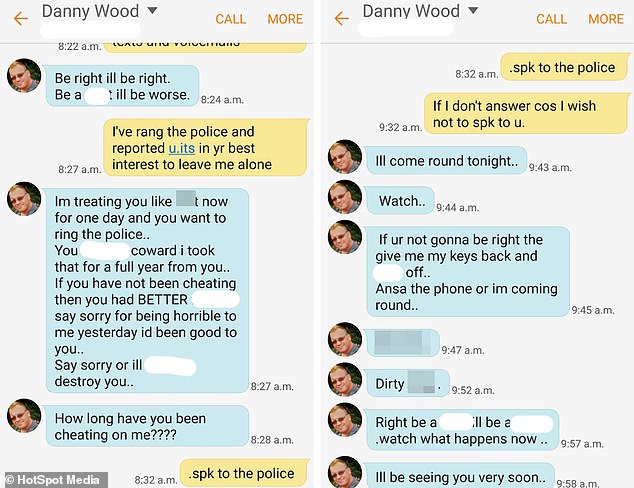 Daniel didn’t take his dumping lightly and turned up at Joanne’s home drunk, calling her names, and rang and texted her hundreds of times a day begging her to take him back 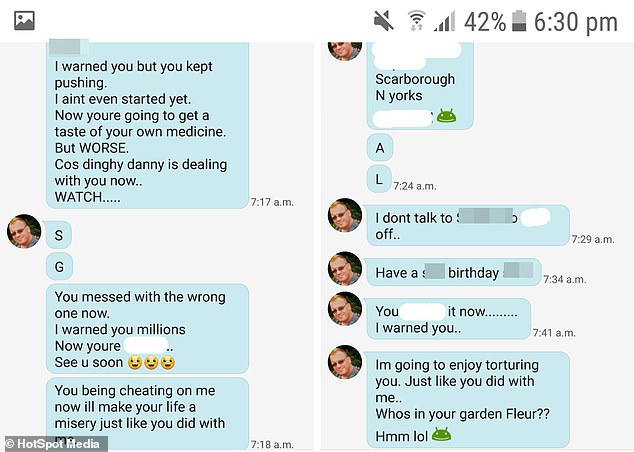 Danny said that he ‘enjoyed’ torturing his ex-partner and sent her hundreds of messages a day, accusing her of cheating on him while they were together

Four months later, in August 2014, they were officially a couple.

Joanne recalled: ‘After that Danny became clingy and obsessive. I received texts while I was working, asking me what I was doing and where I was.

‘And when I told him, he refused to believe me and forced me to send him pictures of where I was.

‘If I didn’t answer the phone, he’d lose his temper.

‘And he accused me of cheating on him all the time, it was exhausting trying to reassure him.’ 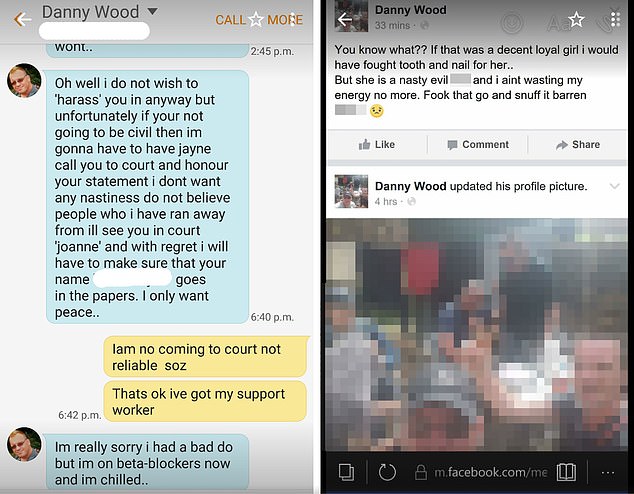 Danny made new Facebook profiles to message his ex, leaving her exhausted and too paranoid to leave the house 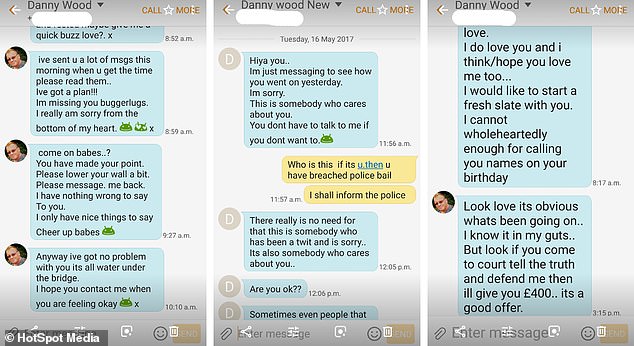 In 2015, after they’d been together for a year, Daniel proposed to Joanne and she reluctantly agreed to marry him.

‘I didn’t want to marry Danny but I was too scared to say no,’ she said. ‘He was so manipulative.

‘I lost my mates as he wouldn’t let me speak to them. I was living my life on eggshells and I knew I couldn’t cope much longer.’

By April 2016, Joanne was fed up and blocked Danny on Facebook after telling him it was over. 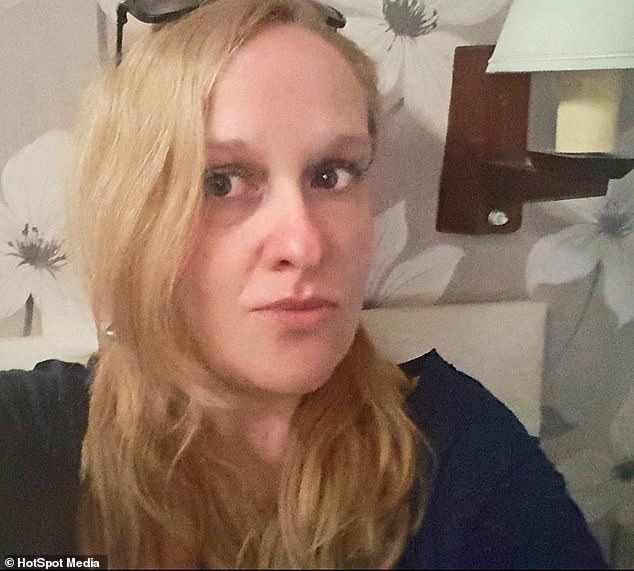 But he called Joanne hundreds of times a day.

‘He made new Facebook profiles to message me. It was exhausting and I felt too paranoid to leave the house,’ she said.

‘He even threatened me over text saying, “I warned you but you kept pushing. I ain’t (sic) even started with you yet. Now you’re going to get a taste of your own medicine”.

‘And he even called me from public pay phones.’

Then in December 2016, Daniel turned up at Joanne’s house drunk, yelling and calling her a s***.

‘I let him in as I didn’t want the neighbours to hear,’ she said. ‘When inside, he accused me of cheating again.

‘I tried to get him to leave but he passed out because he was drunk.

‘The next day, I kicked him out, but he stayed on my street for hours hanging around.’

For the next three months, Daniel continued to harass Joanne bombarding her with texts and calls.

And by February 2017, Joanne had had enough so she reported him to the police.

Daniel was arrested and charged.

Police recovered 60 voicemails on her phone from Danny calling her names and a cheat.

In 2017, Daniel Wood of Trafalgar Square, Scarborough, was convicted of harassment against Joanne.

He was also convicted of assault occasioning actual bodily harm and breach of a restraining order at York Crown Court against another victim.

‘I wanted him to get longer but I’m glad he’s been punished,’ Joanne said.

‘Since I’ve got justice, I could finally move on with my life. If you’re in an abusive relationship, just trust your gut and get out.’