There are no do-overs in real life.

A woman who is unhappy about the way that she looked in her wedding dress is apparently demanding that her family throw a new wedding.  According to one of her family members, the problem with the original dress is that the bride purposely got it tailored too small as an incentive to lose weight and then never lost the weight.

This resulted in some un-flattering wedding photographs that the woman is hoping to get a do-over for. 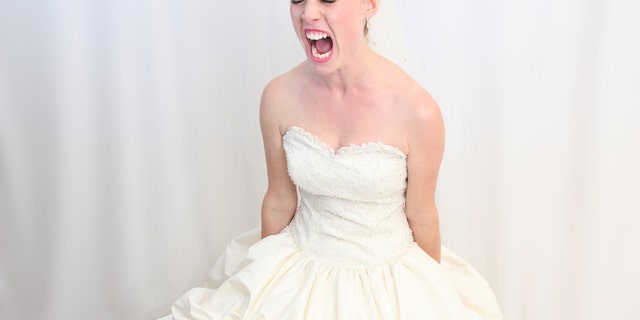 After purposely getting a dress that was too small, a bride is demanding a new wedding so she can get new wedding photos.
(iStock)

The story appeared on Reddit’s Wedding Shaming blogs, where it was posted by a user named TeddyWestSide. According to the post, “My cousin got married two years ago. She ordered her dress on the smaller side saying how she was going to lose all the weight to look perfect in it. Well, she didn’t lose weight. In fact, she gained more weight.”

Despite that, the bride apparently still fit into the dress, but it was noticeable that it was too small for her.

“Apparently she’s so upset over her dress in three of her wedding photos that she has announced she’s planning a whole new wedding,” the post continues. “She appreciates everyone’s cooperation during this time as we, as a whole family, will be the ones paying for it, or volunteering all of our free time to get it together as was our fault for not pushing her harder and letting her look the way she did.”

Unfortunately, she apparently didn’t consult with her family before announcing this.

The poster explains, “This is the first time we have all heard about her being upset over anything. She was also told, in very colorful language, that we will not be throwing a whole new wedding over three bad angled photos.”

Several commenters asked about simply retouching the existing photos, with one user writing, “If all she cares about are the photos, she can Photoshop them. Problem solved.” The original author responded to this post, however, explaining that their cousin wants the pictures to be “authentic,” so they need to be from an actual wedding.

Others asked about simply staging new pictures in a better dress without redoing the entire wedding. One commenter asked, “Why doesn’t she just lose weight, get into the dress, and have a lovely set of pictures taken?”

Once again, the original author responded that their cousin wanted everything to be “authentic.”

Other users, however, took a firm stance against the bride, with one writing, “The family’s response should be a firm no. The cousin needs to take responsibility for past actions and not blame all of you.”