A woman has revealed she is considering banning her mother-in-law from her house after she hit the family dog and called her granddaughter ‘selfish’ on Christmas Day.

The unnamed British woman took to Mumsnet to ask for advice after the stressful visit from her mother-in-law, asking if it would be fair to tell her she wouldn’t be invited back if she kept up the behaviour.

Fellow users slammed the mother-in-law, saying they would have kicked her out if she had hit their dog. Other said the dog should be trained not to jump on people but conceded it was not a good reason to hit the animal. 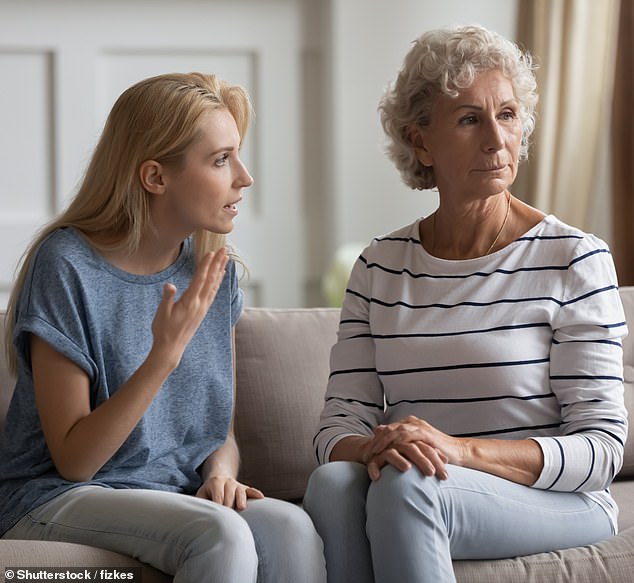 A woman has revealed she is considering banning her mother-in-law from her house after she hit the family dog and called her granddaughter ‘selfish’ on Christmas Day. Stock image 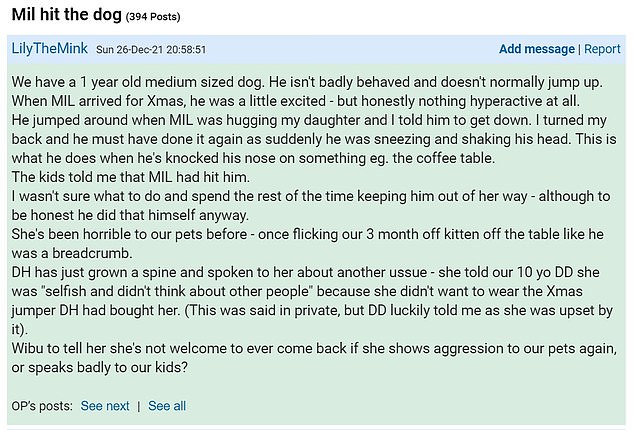 In her post, the mother revealed her one-year-old, ‘medium-sized’ dog got excited when the mother-in-law arrived for Christmas and jumped on her to greet her.

‘He jumped around when MIL was hugging my daughter and I told him to get down.

‘I turned my back and he must have done it again as suddenly he was sneezing and shaking his head. This is what he does when he’s knocked his nose on something eg. the coffee table,’ she said.

‘She’s been horrible to our pets before – once flicking our 3 month off kitten off the table like he was a breadcrumb,’ she claimed.

She went on to say the mother-in-law accused her ten-year-old daughter of being selfish and not thinking about other people because the child refuse to wear a Christmas jumper her father had bought for her.

The 10-year-old was upset by the comment and eventually told her mother. Her husband than confronted the mother-in-law about what she had said. 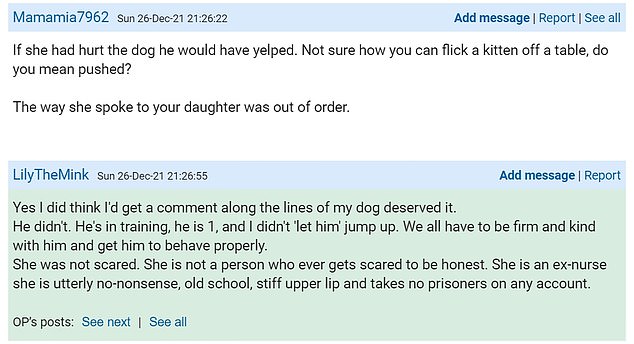 The hostess added that her mother-in-law was a ‘no-nonsense’ woman who ‘takes no prisoner on any account.’ She added her dog did not deserve to be hit

Following these two incidents, the hostess said she was considering telling her mother-in-law she wouldn’t be invited to future Christmas events if she kept on her aggressive behaviour.

She added later on that her mother-in-law is ‘utterly no-nonsense, old school, stiff upper lip and takes no prisoners on any account.’

People slammed the mother-in-law, saying she should not have hi the dog no matter what.

One wrote: ‘No you wouldn’t be unreasonable at all! I’d be fuming at both her comment to your dear daughter as well as hitting your dog. You (or your dear husband ideally) need to tell her it’s unacceptable and she’s not welcome if that’s what she’ll behave like.’

People sided with the hostess, and some said they would have kicked the mother-law out if she had hit their dogs

‘I wouldn’t have had her back in my house after she was cruel to the kitten, to be honest,’ one said.

‘She would be out of the door with no dinner if that was me. But I am very overprotective of my pet,’ another wrote.

However, some people said they would not like it if a dog jumped on them, and suggested the children might have exaggerated their version.

‘Why were you letting your dog jump up on people? I find that so rude and she could have found it frightening. Not to say she should hit him but surely a dog would help or cry out if had been hit,’ one asked.

‘I think she probably just pushed him away, which I would have done if a dog jumped on me,’ they went on.

‘I would clarify with the children “how did she hit him?” before doing anything rash,’ another wrote.

‘If she had hurt the dog he would have yelped. Not sure how you can flick a kitten off a table, do you mean pushed,’ one wrote.

‘I don’t like dogs jumping up around me. You should not let that happen with guests,’ one wrote.

‘I don’t believe in hitting animals but you shouldn’t be letting your dog jump up on people let alone twice. If your dog gets excited by guests (like mine) it should be kept away until it’s calm,’ one said.

‘Mother-in-law was completely out of order so please don’t take this any other way but your dog need to be better trained,’ they went on.