A woman has revealed how an eating disorder left her at ‘deaths door’, as doctors warned her that her heart could fail if she boarded a flight.

Emma Oldfield, 23, from Clacton-On-Sea, Essex, began struggling with an eating disorder after her mother passed away from cancer five years ago.

In the grips of the disease, she wore size 4 clothes and was forced to cancel three summer holidays, due to doctor’s concerns her internal organ couldn’t withstand cabin pressure on a plane.

After a five year battle, she has now found a love of the gym and newfound self confidence, and is a healthy size 10. 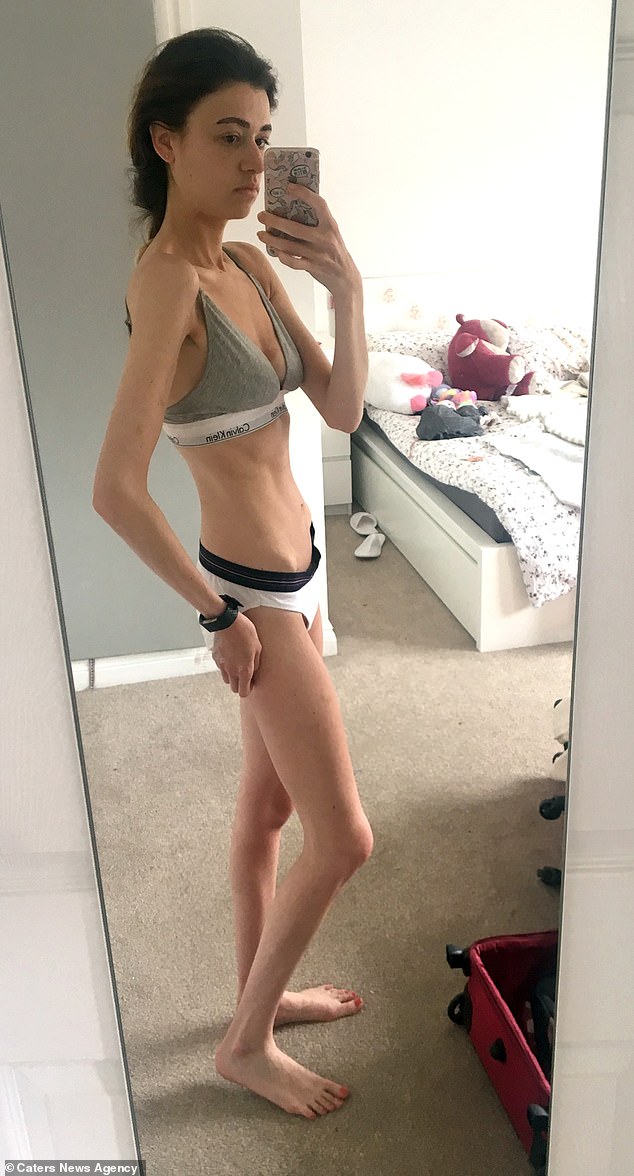 Emma Oldfield, 23, struggled with an eating disorder after her mother passed away from cancer when she was 18. At her lowest weight, she was a size four (pictured in the grips of the illness)

The 23-year-old is now in recovery, and has a free and flexible diet. She says she is the ‘healthiest and happiest’ she’s been in years

She explained: ‘My eating disorder started around the age of 18 shortly after my mum passed away from cancer.

‘I used food and body image as a way of coping with what felt like my entire life falling apart – I always had body image issues.’

She went on: ‘I began losing weight through working 12 hour shifts as a waitress, biking to work daily and not having enough time for breaks and food.

‘This spiralled fairly quickly and I viewed food as guilt, and attached negative connotations with the feelings of being full.’ 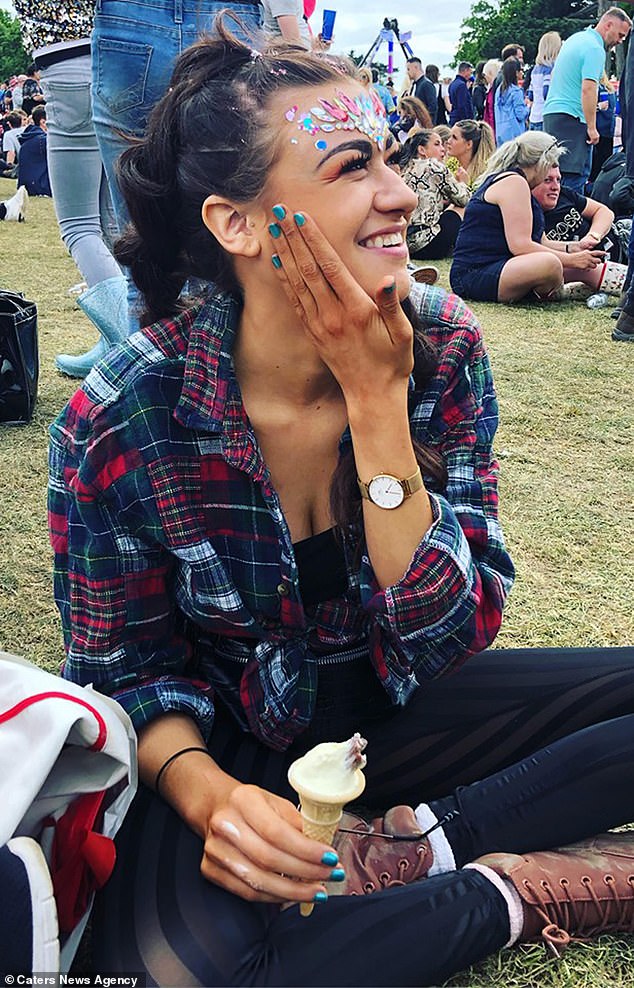 Emma, pictured at a festival, has now made a recovery, and says she will ‘never deprive’ herself of life again, no matter what pressure she might feel 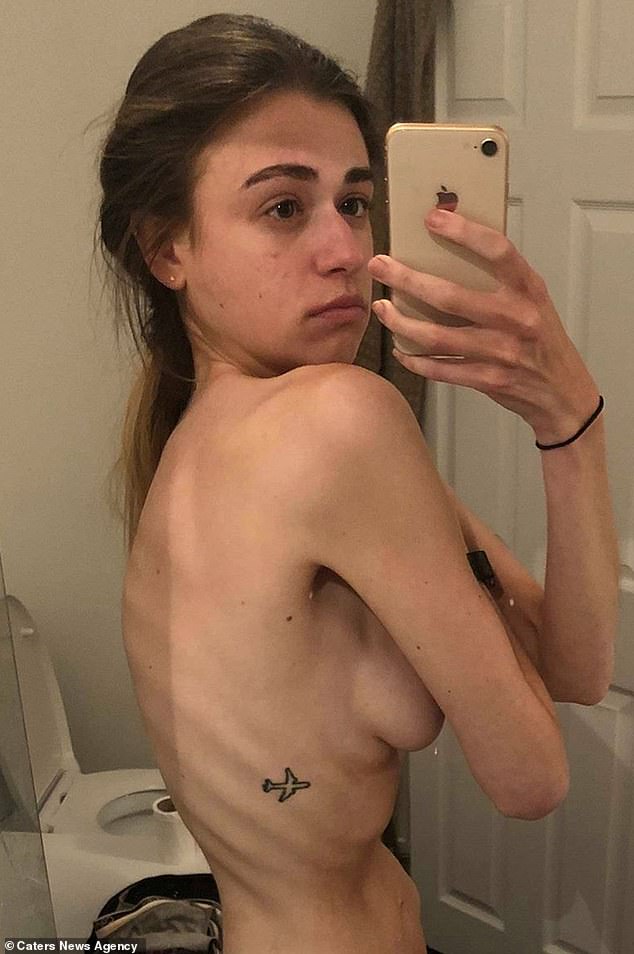 Emma previously had to leave her job as a camp counsellor in America in 2015 to come home and receive treatment for her eating disorder.

The children’s entertainer, said: ‘I’ve had to cancel my last three summer holidays due to the fact I wasn’t healthy enough to fly.

Last year, when Emma was at her ‘worst’, she was warned by doctors that due to being so underweight, she was a risk of sepsis and a cardiac arrest. 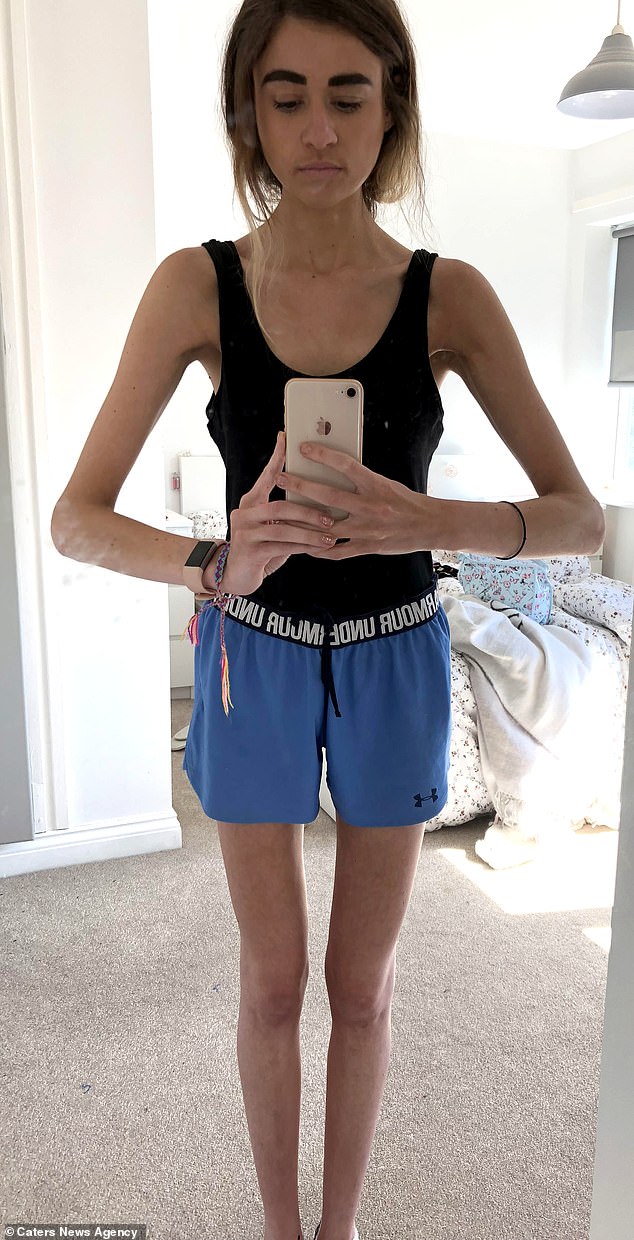 Emma revealed she used food and body image as a way of coping after her mother died from cancer when she was 18 (pictured, struggling with the disease) 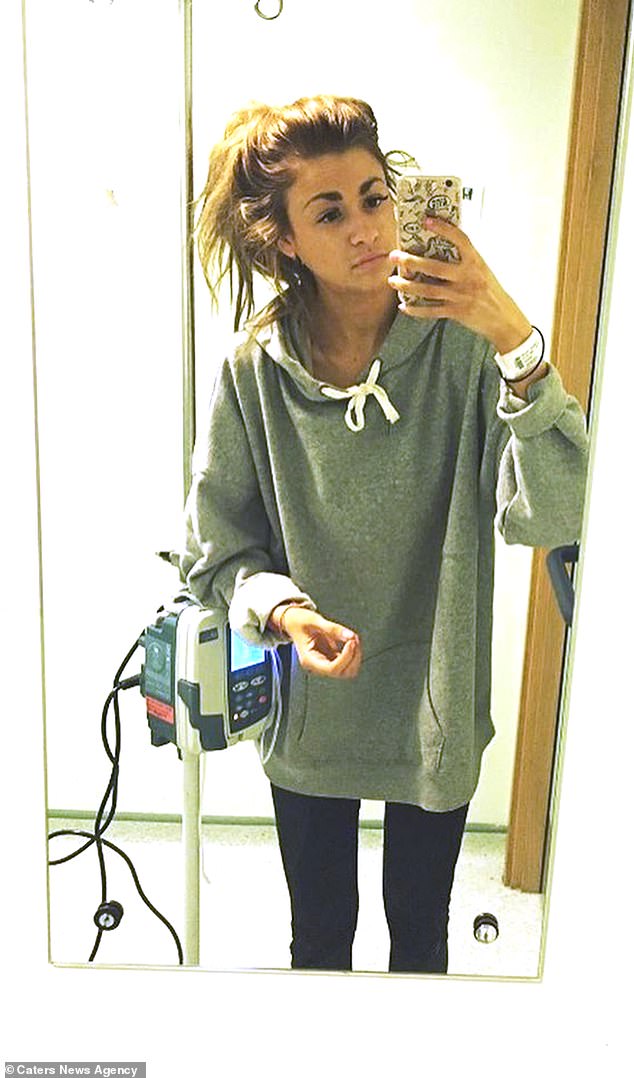 At her lowest weight, Emma was warned that she was at risk of cardiac arrest and sepsis (pictured struggling with the disease)

But a year on from her lowest point, Emma is the healthiest and happiest she’s been for a long time and is on the road to recovery.

She said: ‘For me there was no “light bulb moment”. I didn’t wake up one day and decide to stop my behaviours.

‘It was gradual, it took time, tears and determination, I always wanted a life without an eating disorder and I was fully aware that it was killing me.’

Emma explained: ‘It was making me weak and hurting those around me – as well as myself – but my behaviours and habits were so ingrained. I just didn’t know how to stop, even though I was at death’s door. 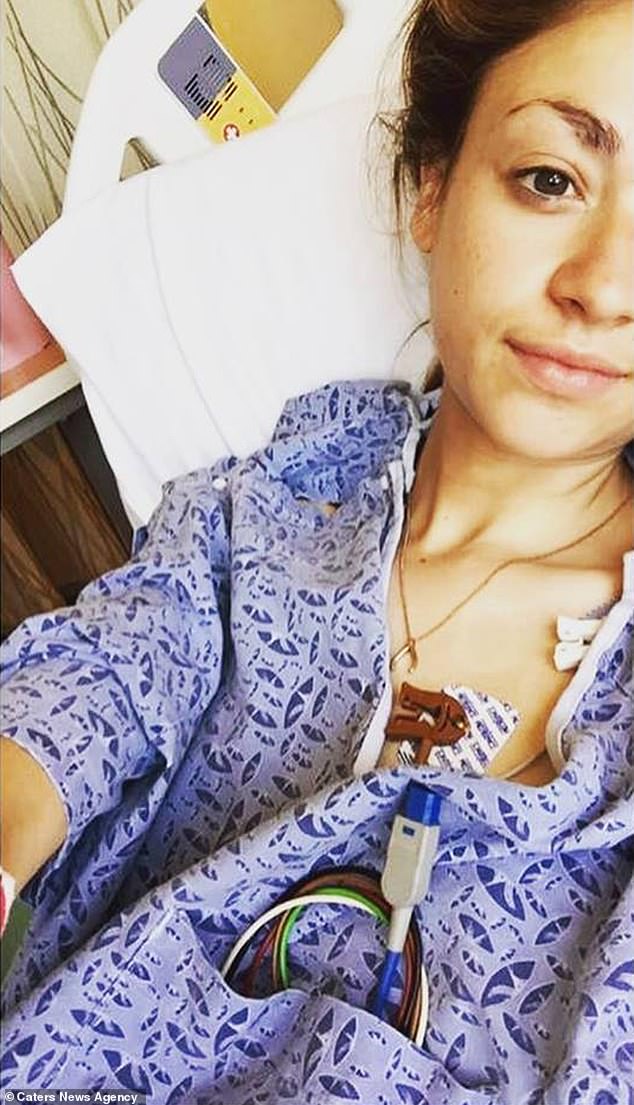 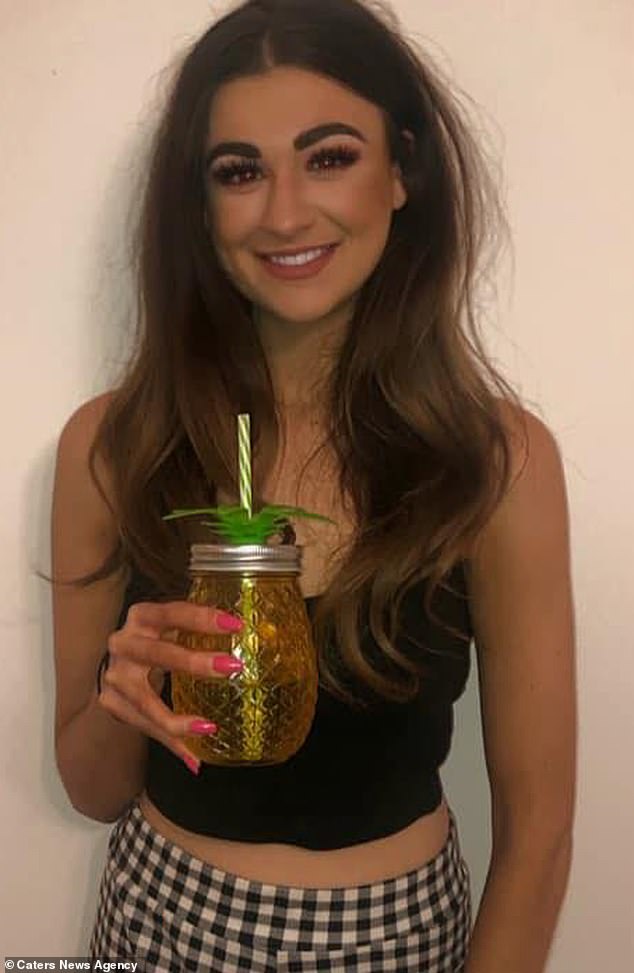 Now, one year on from her lowest weight, Emma is making a recovery and is a health size 10 (pictured in recovery)

‘With the help of professionals and eating disorder services, I was able to progress and start introducing new things, adding them to my routine and embedding them before I moved forward with the next step.’

Emma added: ‘I would be lying if I said I was ‘cured’ and I didn’t have set backs, but overall I’m the healthiest and happiest I’ve been in years. 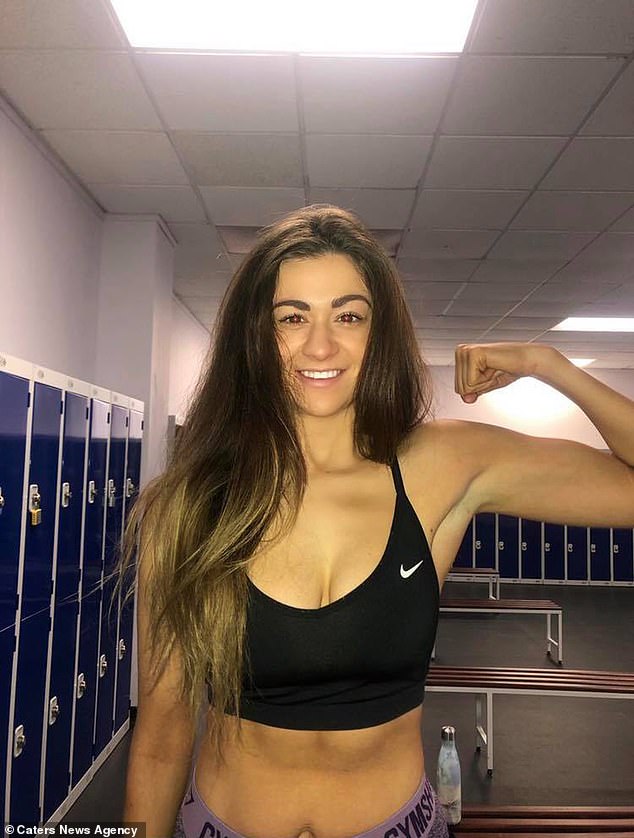 ‘I will never deprive myself of life again, in spite of pressures from society, perfectionism, stressful life events or anything else that might happen.

‘Since speaking out about my battle, lots of people have thanked me for my honesty and hope.

‘I have worked so hard to get to where I am today and I hope my journey inspires at least one person to know the future can be what you make it.’