The Australia Workers Union is claiming an historic victory over the farm lobby after the Fair Work Commission ordered every farm worker in the country is entitled the minimum casual pay rate of $25.41 per hour.

In a ruling which could be challenged in the High Court by peak agricultural lobby groups, the commission found against the current piece rate pay arrangements, where workers are paid for the amount of fruit or vegetables they harvest. 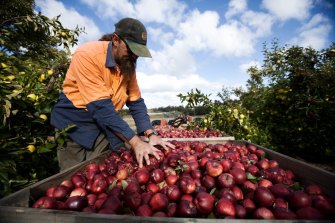 The Australian Workers Union has claimed a significant victory for fruit pickers.Credit:Louie Douvis

The union applied to the commission to have piece rate arrangements over ruled, arguing it was being manipulated by employers, with widespread reports of workers effectively being paid just $3 an hour.

“(T)he existing pieceworker provisions in the Horticulture Award are not fit for purpose; they do not provide a fair and relevant minimum safety net as required by (the Fair Work Act),” the commission’s ruling said.

“I believe this decision ranks among the great victories of our union’s 135 year history,” said the national secretary of the AWU, Daniel Walton.

“Fruit pickers in Australia have been routinely and systemically exploited and underpaid. Too many farmers have been able to manipulate the piece rate system to establish pay and conditions far beneath Australian standards.”

They argued piece rates boosted farm businesses’ productivity and at the same time offered good earning opportunities to hard workers to reap above award rates of pay, based on their performance.

Mr Walton said the minimum casual rate for fruit pickers would help migrant workers, who often lack good English language skills, to check their pay packet to “understand if they’re being ripped off”.

“From now on if you’re making less than $25 an hour fruit picking in Australia your boss is breaking the law and stealing from you.”

Last year the Fair Work Ombudsman found that of the 245 firms checked by the ombudsman, which included farms and labour hire firms, 162 had gone out of business. Of the 83 still operating, 38 were breaching workplace laws. The ombudsman recovered $64,134 for 279 workers at 22 firms and issued seven penalty notices totalling $13,020.