Home » Sport » 2021 Australian Open: What to Watch on Thursday Night

As each singles draw dwindled to 32 players, some former major champions lost their hopes of snagging one more Grand Slam title. The 17th-seeded Stan Wawrinka lost his second-round match to Marton Fucsovics, and the eighth-seeded Bianca Andreescu fell to Hsieh Su-Wei.

Although the field has shrunk, plenty of promising youngsters and past major champions remain.

Here are some matches to keep an eye on.

Because of the number of matches cycling through courts, the times for individual matchups are best estimates and certain to fluctuate based on when earlier play is completed. All times are Eastern.

Aryna Sabalenka, the seventh seed, has equaled her best result at the Australian Open by reaching the third round. She has yet to make it to a Grand Slam quarterfinal, despite how consistently well she plays on tour. Sabalenka won three hardcourt singles titles in 2020, and started 2021 by winning the Abu Dhabi Open. Her aggressive style can help her on faster-paced courts, although on her poorer days it can create plenty of unforced errors. 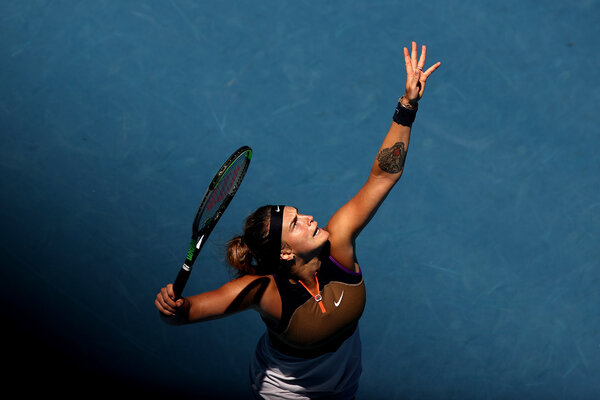 Ann Li, the world No. 69, has had a fantastic run of results in the past few weeks. Last week, she won the Grampians Trophy in Melbourne with a walkover in the final. Then, in the first round of the Australian Open, she upset the 31st seed, Zhang Shuai, while dropping only two games. Although her second-round match against Alizé Cornet required a bit more from her, Li played well, pushing through a tough second set tiebreaker in which she faced two set points. One more upset would put her in her first round of 16 at a Grand Slam event.

Naomi Osaka, the third seed, has won a Grand Slam event in each of the past three years, all on hardcourts. The fast pace of play suits her, as she pins opponents into the back corners of the court with her flat shots. Osaka did not play in the French Open in October, citing concerns related to the pandemic. She is back into a groove at the Australian Open, dropping just eight games across her first two matches.

Ons Jabeur, the 27th seed, became the first Arab woman to reach a Grand Slam quarterfinal at last year’s Australian Open, losing to the eventual champion, Sofia Kenin. Jabeur’s adaptability can be very difficult for opponents to handle; she can unravel an array of opponents’ weaknesses. To beat Osaka, Jabeur will need to have a strong start and not allow her opponent to get into a rhythm.

A four-time Grand Slam finalist, Thiem has slowly been chipping away at the hegemony of the so-called Big Three of Roger Federer, Rafael Nadal and Novak Djokovic. Though Thiem’s U.S. Open victory came on a hard court, that is not considered his best surface. And with the unusually quick conditions in Australia, he may struggle to return to the final, where he lost to Djokovic last year.

Nick Kyrgios, an Australian ranked 47th in the world, was often stereotyped as an uncouth punk for his perceived lack of interest in the sport of tennis. As the coronavirus pandemic shut down the ATP Tour, Kyrgios became a loud advocate for health and safety precautions, openly criticizing both his peers and legends like Boris Becker for choosing to socialize or complaining about safety measures. Now Kyrgios is playing in front of home crowds, and the fast-paced courts in Melbourne will aid his aggressive baseline style. However, after barely squeezing past the 29th seed, Ugo Humbert, in five sets, Kyrgios will be challenged to break down Thiem’s exceptional defensive play.

Denis Shapovalov and Felix Auger-Aliassime, the two youngest members of the Canadian delegation at the Australian Open, are both aggressive, full-court players who rely on their athleticism to get through tough matches.

Shapovalov, the 11th seed, reached his first Grand Slam quarterfinal at the U.S. Open before losing in five sets to Pablo Carreño Busta. Although Shapovalov, 21, lost both of his ATP Cup matches — a singles match against the seventh-ranked Alexander Zverev and a doubles match — they were tightly contested. After an impressive five-set win over the fellow up-and-comer Jannik Sinner, Shapovalov looks prepared to reach the second week of play.

Auger-Aliassime, 20, has skated through his first two rounds, convincingly dismantling his opponents without dropping a set. The last time he faced Shapovalov on tour, he lost in straight sets in the first round of the 2019 U.S. Open. A year and a half later, this match will be a good test of whether he can usurp his close friend as the top Canadian men’s player.

Here are a few more matches to keep an eye on: