Home » Sport » A 6-foot-7 welterweight floored his opponent with a chin-cracking, fight-ending, kneecap to the face to kick off the Bellator 252 event 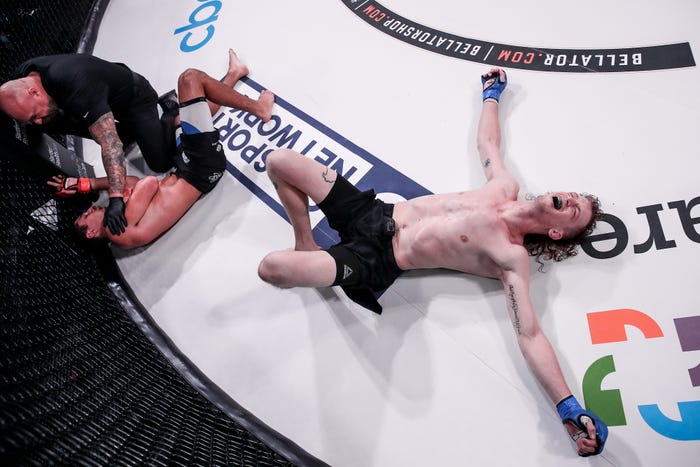 A 6-foot-7 welterweight with one of MMA's best haircuts kicked-off Bellator 252 with a chin-cracking, fight-ending, kneecap to his opponent's face.

Trevor Gudde fought the relatively tiny Khonry Gracie, who is 6-foot-1, in a 170-pound match which opened the preliminary card of Thursday's event.

The event took place behind-closed-doors at the Mohegan Sun Casino in Connecticut, as the MMA firm continues with cards framed around its featherweight grand prix — a 16-man tournament which had been disrupted by the coronavirus pandemic.

The match between Gudde, nicknamed 'Scarecrow,' and his opponent, was not part of the featherweight grand prix.

Despite Gudde's best efforts to keep the fight standing-up in the opening round, the shorter Gracie was able to assert his superior grappling skillset in the second.

However, Gudde ended things midway through the third when he timed a step knee to perfection, lifting the strike into Gracie's jawbone which crumpled him in an instant.

He then attacked him with ground-and-pound and, from there, it was only a matter of time before the referee shoved him off of Gracie, effectively ending the fight.

"It feels amazing. We ran through this game-plan a thousand times, I feel I've been in fight camp a year straight, and everything we worked on came to fruition," Gudde said at a virtual post-fight press conference after his win.

"That step knee that ended up cracking him and knocking him down was what my coach promised was going to work," he said.

"We drilled that 10,000 times in the last several months and it was actually cool to see that, like, work out perfectly in the third."

With victory, Gudde advanced his pro MMA record to two wins (one knockout and one submission) against one loss.

Defeat saw Gracie's record retreat to two wins (one submission and one decision) against two losses.

The event took place behind-closed-doors at the Mohegan Sun Casino in Connecticut, as the MMA firm continues with cards framed around its featherweight grand prix — a 16-man tournament which had been disrupted by the coronavirus pandemic.