Home » Sport » A Mound Visit, a Quick Read and a Lifeline for the Astros

The Houston Astros hired Dusty Baker to manage a crisis. The baseball managing would come later, but first, Baker had to guide the Astros out of the worst team scandal of his long lifetime. He knows that was why he got a fifth try to win a World Series as a manager.

“If there wasn’t a negative air about things, I wouldn’t have this job, because they wouldn’t need me,” Baker, 71, said before Game 4 of the American League Championship Series on Wednesday. “I’ve always been thrust into situations where I had to call upon my background. You don’t really know why things happen in your life, and things happen in your life to prepare you to handle negative stuff.”

The Astros created the negativity by stealing signs to help win a title in 2017, acts that a Major League Baseball investigation confirmed in January. The pandemic has spared the players from heckling crowds, but they have worn the weight of scorn from fans and opponents. An onslaught of injuries only made things tougher.

But the Astros did just enough in the abbreviated regular season to qualify for the expanded playoffs at 29-31. They won their first two rounds, then lost three in a row to the Tampa Bay Rays to open the A.L.C.S. in San Diego.

That is when the baseball crisis confronted Baker: leading by two runs in the top of the sixth inning on Wednesday night, one out and two on, with Randy Arozarena coming to the plate. Houston’s Zack Greinke had pitched well — except for allowing a two-run homer to Arozarena, the hottest hitter on the planet, his last time up.

So Baker visited Greinke and catcher Martin Maldonado at the mound. It was Greinke’s third time through the order — when hitters often punish a familiar, tiring pitcher — and Baker could call for his closer, Ryan Pressly, who still had not pitched in the series. That was the safe move, and Baker strongly considered it.

“I usually don’t change my mind, but I hadn’t had my mind really, really made up until I got out there and I saw the look in Zack’s eyes, and Maldy was adamant about: ‘He can get this guy,’” Baker said. “And I said, ‘OK, you’ve got it then.’ It was more old school, doing the right thing that I thought was right.”

Baker said a prayer on his way back to the dugout. “Sometimes I talk to my dad and I just get a feeling,” he said, referencing his father, Johnnie B. Baker Sr., who died in 2009. Then Baker watched Greinke strike out Arozarena, allow an infield single to load the bases, and then fan Mike Brosseau to end the threat.

Greinke had not won in his last 10 postseason starts, but he came close in Game 7 of the World Series against Washington last October. Greinke cruised through six innings that day, but was pulled by Baker’s predecessor, A.J. Hinch, with one in, one on, one out and a 2-1 lead in the seventh. Greinke watched as the next batter, Howie Kendrick, homered off Will Harris to put the Nationals ahead for good.

Greinke threw only 80 pitches that night, one more than he had thrown on Wednesday when Baker left him in to face Arozarena. Greinke said nothing in their meeting on the mound, but later thanked Baker later on the bench, even before his teammates had closed out Houston’s 4-3 victory.

Greinke, who joined the Astros in a trade from Arizona last July 31, said Game 7 was only one instance of that lack of confidence from “probably a dozen examples, if you look back at it.” And while Greinke, 36, generally does not say much, he clearly has the pride that comes with being a possible Hall of Famer.

Only one active pitcher — his Astros teammate Justin Verlander, who is out with Tommy John surgery — has more wins and innings than Greinke, who has spent 16 seasons in the majors. He appreciates data and modern analytics, but his experience has forged a bond with Baker.

“He reads people really good, and I don’t think I’ve ever seen him make a wrong decision when he trusts what he sees,” Greinke said. “He sees the right thing almost 100 percent of the time, and not everyone has that skill. Not many people do.” 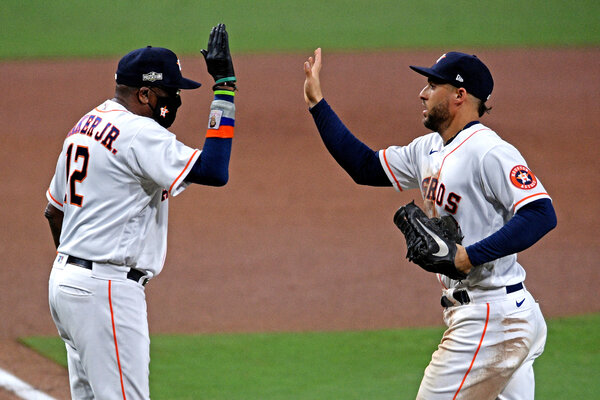 Baker applied that intuition to his lineup card on Wednesday, keeping the veteran Jose Altuve at second base despite his making critical throwing errors that helped doom the Astros in Games 2 and 3. He moved Altuve down a spot, to third in the batting order, and made a powerful comparison in their pregame talk.

“I told him that another second baseman, Little Joe Morgan, batted third for the Big Red Machine,” Baker said. “Then he told me, ‘Hey, man, I’m ready.’”

Morgan, the Hall of Fame second baseman who died on Sunday, led Cincinnati to two championships in the 1970s. At 5 foot 7, he had surprising power for his size, like Altuve, who is 5 foot 6 and homered in the first inning on Wednesday for the third time in the A.L.C.S. Altuve later added a run-scoring double and made two clean throws in the field.

“He wants to help the team in every aspect of the game, and when he believes that he failed or believes that he let the guys down, he really takes it to heart,” said center fielder George Springer, who slammed a towering two-run homer in the fifth. “But one of the most impressive things about Jose is the way he can clear his head and still contribute.”

Altuve said he simply had no choice but to shake off his poor throws. That is easier said than done, of course, but he proved it in the ninth, scooping a Joey Wendle grounder, turning his shoulders and firing a strong throw to second for a force out.

“That’s the way I always do it, like routine,” Altuve said. “I don’t want to think too much about throws, because that’s when you make mistakes. For now I’m just going to do what I do, catch the ball and throw it.”

Altuve’s throw was not quick enough for shortstop Carlos Correa to complete the double play, which would have ended the game. Willy Adames doubled in a run, and a wild pitch by Pressly brought him to third, 90 feet from tying the game.

A fly out by Yoshi Tsutsugo finally won it for the Astros, who still face a major challenge: Only one team, the 2004 Boston Red Sox, has won a best-of-seven series after losing the first three games. Those Red Sox — who famously slew the Yankees in the A.L.C.S. — are also the last team to force a Game 6.

Baker knows the history, and his pitching plans for Game 5 are uncertain. But he still plans to take his team to Arlington, Texas, for the World Series next week — and, naturally, he reached back several decades to find just the right inspiration for his team.

“We’re ready to go to Dallas,” Baker said. “This is kind of what my message was: There was a song by Freddie King, ‘Living in the Palace of the King,’ and going back to Dallas. So we’re one step closer to the top of that mountain, but we’ve got a couple of steep cliffs the next couple of days.”