Home » Sport » A ‘Perfect’ Pitcher, a Home Run Stealer and Two-Thirds of a Big 3

The Baseball Hall of Fame announced its new ballot on Monday, with 11 first-time candidates to go along with 14 holdovers, including four who got more than half of the votes from writers last winter: Barry Bonds, Roger Clemens, Curt Schilling and Omar Vizquel. At 70 percent, Schilling was the closest to reaching the 75 percent needed for election.

The new class seems unlikely to produce any players who will end up with a plaque in Cooperstown, N.Y., but all left an impression on the game. Here’s a quick salute to each of this year’s new finalists. 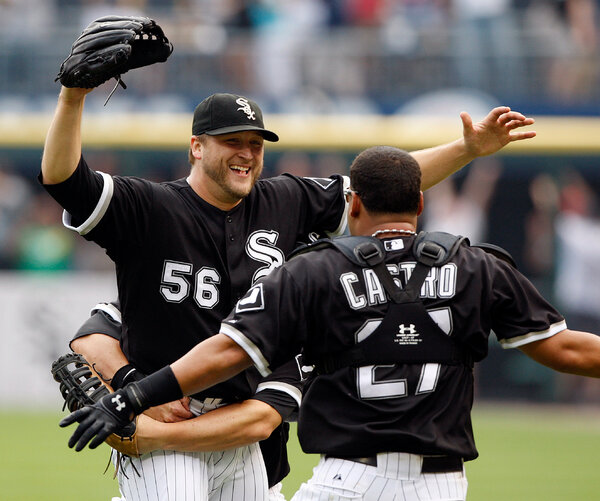 No pitcher has thrown two perfect games, but Buehrle flirted with doing it consecutively for the White Sox in July 2009. Five days after spinning one gem against Tampa Bay, he stayed perfect for 17 batters in Minnesota until a two-out walk in the sixth inning. Buehrle had a remarkable career, finishing with 15 consecutive seasons of at least 30 starts. He’s the only pitcher ever to bundle all of these achievements: 200 career victories, an All-Star Game start, a perfect game, another no-hitter, and a World Series save.

A hard, biting curveball helped Burnett collect 2,513 strikeouts, nudging him into the top 40 on the career list, just above the Hall of Famers Christy Mathewson, Don Drysdale and Jack Morris. As a boy, Burnett said, his father never let him throw it — but his grandfather showed him how. “He said, ‘Throw it like this, throw the hell out of it, and it’ll break,’” Burnett said, comparing the stiff-wrist action to firing a gun. “He was an ornery, mean-but-lovable grandpa; one of those guys, you know? I threw the first one and it went flying, and he was like, ‘What the hell was that? Throw it like this!’ It’s the only hook I’ve ever thrown.”

A cluster of longtime future major leaguers blossomed in the Virginia Beach area in the 1990s, including David Wright, Justin and Melvin Upton Jr., Ryan Zimmerman and Mark Reynolds. But the oldest of the group was the trendsetter; as Wright puts it in his new memoir with Anthony DiComo: “The one we all looked up to was Michael Cuddyer.” A first-round pick by the Twins in 1997, Cuddyer played 15 major league seasons, won a batting title for Colorado in 2013 and became Wright’s teammate with the Mets in 2015, his last season. Cuddyer is one of three Mets whose final appearance came in the World Series, with Ed Charles and Willie Mays.

One morning in 2015, as he neared the end of his career, Haren reflected on the progression of his goals. He never assumed he would earn 153 victories and lead the majors in starts across his final 11 seasons. All he wanted was to use baseball as a way into college. “I think I got an 80 percent scholarship to Pepperdine, and I was like, ‘I really made my parents proud,’” he said. “I thought that was it. I was happy.” Yet there was so much more to come. As a freshman, Haren replaced an injured teammate in the Waves’ rotation. As a sophomore, he surprised himself by how hard he could throw. As a junior, he was drafted by the Cardinals. Two years later, he reached the majors. “I thought, ‘Wow, if I could stay, that would be amazing,’” Haren said. “Then I was like, ‘Wow, I could make enough money to last a lifetime.’ When I signed my first deal with Oakland, it was like 6 years and $13 million. I thought, ‘I can’t believe I probably will never have to work again, because of this.’ My career just kept going from there. But I never grew up thinking, ‘Oh, I want to be a Hall of Fame baseball player.’ I mean, I loved baseball, but I never thought I would be where I am today.” Today, he is on the ballot for Cooperstown.

In 1999, when Hawkins was going nowhere as a starter for the Twins, he grooved a changeup to the Mariners’ Ken Griffey Jr., who walloped it deep into the upper deck at the Metrodome. Later, a clubhouse attendant told Hawkins that Griffey wanted to see him in the laundry room. When they met, Griffey asked why a pitcher with such a lively fastball didn’t seem to trust his best pitch. Hawkins had no answer. “I learned a lot by him telling me that,” Hawkins said in 2014, when he was the longest-tenured player in the majors. “My fastball was better than I thought it was. I used it to my advantage after that.” Hawkins lasted 21 seasons and made 1,042 appearances, 10th on the career list.

These statistical benchmarks are hardly locks for the Hall of Fame: 200 wins, 2,000 strikeouts, career earned-run average below 3.50. But Hudson is one of just 15 pitchers to debut in the division-play era (since 1969) and meet all three standards. Six are in the Hall of Fame (Bert Blyleven, Roy Halladay, Randy Johnson, Greg Maddux, Pedro Martinez and John Smoltz), two are active (Zack Greinke and Justin Verlander) and the others are Vida Blue, Kevin Brown, Roger Clemens, Orel Hershiser, Rick Reuschel and Curt Schilling. Good company.

Few players were as universally beloved within baseball as Hunter, who collected Gold Gloves and warm adjectives in bulk over 19 seasons. “He’s charismatic, he’s funny, he’s very approachable and he goes about things the right way,” Justin Verlander said of Hunter during the 2013 American League Championship Series, when they played for Detroit. “What more can you ask for? He’s the consummate teammate and friend.” Even before he reached the majors, Hunter was inspiring the next generation. As a Twins farmhand in 1997, Hunter played catch with a local kid in the stands in New Britain, Conn. The boy, who was seven years old at the time, made Hunter his idol and grew up to be a fellow All-Star center fielder: George Springer, now a prized free agent after seven stellar years with the Astros.

On July 23, 2015, the Pirates acquired Ramirez for the final two months of his career. Exactly 12 years earlier, when Ramirez was 25, they had traded him to the Chicago Cubs, for a minimal return, to clear his future $6 million salary. For a dozen years, Ramirez tormented his former team, swatting 304 homers for the division-rival Cubs and Brewers. In his last at-bat, as a pinch-hitter at age 37, he bounced into a double play as Pittsburgh lost a home wild-card game — to the Cubs, naturally. The Pirates have not been back to the playoffs since.

The greatest season of Swisher’s life started on the bench with the 2009 Yankees. Swisher was new to the team, acquired in an off-season trade with the White Sox, and did not unseat Xavier Nady as the everyday right fielder until mid-April, when Nady tore an elbow ligament. Swisher became a force in a championship lineup while Nady languished on the disabled list, but things were hardly awkward between the two. Nady let Swisher move in with his family for much of the season, and Swisher made himself comfortable. “In the morning he’d be sitting on the couch in just his boxers — no shirt, just his underwear,” Nady told Mark Feinsand and Bryan Hoch for their book, “Mission 27,” about the 2009 team. “I’d just wake up and I’d be dying laughing.”

As the final out of the 2009 World Series, Victorino ensured himself an eternal cameo in Yankees highlight videos. But he embodied a proud Phillies team in the way he fought when down to his last strike against Mariano Rivera, fouling off four cutters and taking two balls before finally grounding out to second. Four years later, in another Game 6, Victorino ripped a three-run double to send the Red Sox to their first clinching World Series game in Boston in 95 years.

Lots of players wear high uniform numbers now, but when Zito chose No. 75 for the A’s in the early 2000s, it stood out. His reasoning was eminently logical: “I’m really into numbers and symmetry,” he said, “and if you look at the 75, it creates a really nice shelf under my name.” Alas, Zito’s second team, the Giants, did not display players’ names on the back of their home jerseys. Zito hung onto 75 anyway, and while he mostly struggled in San Francisco, he made up for it with two October gems in 2012 to help win a championship. Now a full-time musician and singer, Zito is the only pitcher ever to play exclusively for two teams in the same metropolitan area and log at least 1,000 innings for both.