Home » Sport » A prince, a World Cup winner and a dead-ringer digger

TFF has told the story before of emerging from the Cardiff Hilton early on the morning after the Wallabies had beaten the French in the 1999 World Cup.

I was on my way to the airport for the first flight home, and making my way through the detritus of the wild celebrations the night before. And there on the steps of the Hilton was my old mate, Clive Woodward, the English rugby coach who I had played with at Manly a decade earlier, and who was now watching in the misty morning as stragglers straggled home. 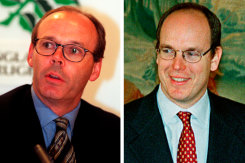 Of course, I gave him a big slap on the back and an earnest inquiry as to “Clive Woodward, you old bastard,
how are they hangin’?”

In reply, he looked me up and down and replied a little tightly that he was not, thank you, Clive Woodward.

And it was at this point, another bloke in an expensive trench coat came up and purred, “Your car is ready, Prince Albert.”

Oh. Well, how are they hangin’ anyway?

The short answer was, pretty well, and clearly all the better to be safely taking his leave of me.

Until this week, this was the biggest case of a doppelgänger I’d ever come across. But while doing research for a book I am doing on the Battle of Long Tan in Vietnam in 1966, I came across this photo of one of the un-named
heroes of the battle.

So you tell me. Is that digger a dead-ringer for a certain well-loved rugby league identity, or WHAT? 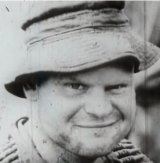 One of the heroes from the Battle of Long Tan. Remind you of anyone?

So I asked him. Paul replied: “Hello Pete. My word he is a good-looking fellow. Alas, none of my relations fought at Long Tan. My grandfather was actually in the second wave at Gallipoli. And survived.”

A dead-ringer, I tell you!

The people you see …

Well, you can imagine my surprise. The bloke who introduced himself to me in a Mosman cafe on Friday morning looked every inch what he was: a successful businessman. You know the type: well-cut suit, pinstripe shirt, a certain level of fine grooming that has always escaped you and me. The surprise came in who he was.

It was Bradley Clyde, the famed Raiders, NSW and Kangaroos forward from the last decade of last century! Clyde, you might recall, was the first major signing in the Super League war, and for good reason: he was one of the best players in the game, and both comps wanted him for boasting rights. News Limited won by giving him a contract about four times that which he was previously on – his telephone number, with a $ sign in front of it.

The double surprise was that these days, despite such a storied career over 14 years of top-line league, he carries few scars. No busted nose, puffy eye-brows or dodgy joints.

“I feel just like I used to,” he reports.

And he looks like he used to, too. It’s just that I was seeing him out of context. Now living in Sydney, he works for some head-hunting mob and is going well!

“Rugby politics,” the rugby coach and poet Peter Fenton once said, “is either totally boring, or absolutely disgusting.”

For the life of me I can’t follow the ructions at the very top of Cricket Australia this week which saw the chair, Earl Eddings, suddenly resign the day before the AGM, but have some mail that the problems the sport is facing right now go well beyond the capacity or lack thereof of the chair.

That is, whoever now takes over will face the same impossible task as Eddings: trying to herd alley cats with sharp claws who represent the competing interests of the game, all of whom want to go in totally different directions.

Internationally, you have the issue that while the overall health of the game needs an expanded footprint globally; the big broadcasters with the big bucks are only interested in matches between Australia, England and India, and the crowds of those nations only turn up for the same.

So why grant Test-playing status to the likes of Afghanistan and Ireland if the big nations are so reluctant to play Tests against them and support them? (And for Afghanistan, that reluctance was apparent well before the Taliban took over, engendering the move to sanction them.)

Meanwhile, the growth of IPL-like leagues in those big three countries means there is little time for other forms of cricket, and the best cricketers are in a constant struggle to juggle international cricket with first-class cricket with T20 franchise cricket.

And when it is the last of these that pay the biggest bills, we can’t be surprised that the others miss out, particularly in Australia when there is next to zero interest in things such as the Sheffield Shield and whatever the Marsh Cup is.

How to resolve all that? I have no clue. I only say that, as someone who used to love watching cricket but now watches very little – apart from Tests between Australia and England, and Australia and India, (I know) – the first step must be to stop cricket becoming TV wallpaper, always droning on somewhere.

For the overall health of the game, elite cricket must become an event, not just if-this-is-Tuesday-this-must-be-the-Gabba.

Get behind good cause

In 2017, Nathan and Mel Wellings, like everyone else at the Avalon Surf Lifesaving Club, were shocked when one of the club’s teenage surf boat rowers took his own life.

“His death affected not just the surf club, but the whole community,” Mel explains. “Nathan is an Avalon surfboat sweep and our kids are in Avalon Nippers.

“I said to Nathan, ‘Surely there’s something we can do to raise awareness of mental health issues on the Northern Beaches and prevent future suicides?’”

The couple persuaded the Avalon club to host its first 24 Hour Row in 2018, and it has grown exponentially ever since, expanding to other surf clubs and Rowing Australia, raising $200,000 for the Gotcha4Life mental health charity.

This year’s event – originally scheduled for August but postponed by COVID-19 – will now start at noon on Saturday, October 30, continuing through the night before finishing at noon the next day.

“This year we have at least 40 surf clubs, gyms and schools joining us,” says Mel. “They’re mainly in NSW, including Palm Beach, Newport, Mona Vale and Collaroy. But also in Queensland, South Australia and WA. Our
aim is to raise another $200,000 this year alone.”

You can register or donate at 24hourrow.com.au.

Crisis support is available from Lifeline on 13 11 14

Chris Gayle responds to Curtly Ambrose’s criticism: “I looked up to this man. But I am now speaking from my heart. I don’t know what, since he retired, what he had against Chris Gayle . . . I can tell you personally, and you can let him know that Chris Gayle, the Universe Boss, have no respect for Curtly Ambrose whatsoever.” I am not sure what Ambrose said, but if it was, “This bloke is so far up himself he can see his own tonsils,” he’d be on the money.

The late, great Norm Provan’s daughter Suzanne: “I haven’t got the words to describe how wonderful my father is. He was an exceptional man in his personal life, league life and working life. He worked from dawn until dusk until he was 80. He helped a lot of people around him. He was just an inspiration.”

AFL star Bailey Smith on dealing with the challenges of social media: “I acknowledge it, I know it’s there, it is the elephant in my brain but I ignore it as much as I can. The things that ground me each day, I go get my coffee, going to the beach from 10 till 2, my best friends, getting dinner. I focus on what I want to do each day and what I want to get out of myself.” If you care, “elephant in the brain” is actually a thing.

Socceroo Fran Karacic on playing for Australia despite not ever having been here: “It doesn’t matter . . . I have a connection and I am proud when I am wearing the Australian shirt. I would like us to qualify for the World Cup, so I can wear the Australian jersey at a World Cup. It is like a dream for me.” More than passing odd.

Ariarne Titmus on life after the Tokyo Olympics: “I have not had a break longer than two weeks in my life since I started swimming. I’ve pretty much gone in two months from the peak of my life. I’ve climbed Everest and now I’m below base camp – I’m almost underground – but I want to build towards Paris, so these are the first steps. I want to climb Everest again. It’s all changed. I’m no longer the hunter, I’m the hunted.”

Denny Doyle, a Catholic activist from Cincinatti who is trying to get his church out of sponsoring football competitions for children, because of the damage done by concussion: “Nothing like this upsets my faith because my faith transcends Catholicism and my own relationship with God. But it’s disappointing and it’s sad because I think that they’re making a terrible mistake and they’re injuring children’s brains. It’s the second child abuse crisis in the Catholic Church.”

Michael Jordan on whether he’s concerned with the NBA wanting compulsory vaccinations for the players: “Not at all. Not at all. I am total in unison with the league. I’m a firm believer in science and, you know, I’m going to stick with that and hopefully everybody abides by whatever the league sets the rules. I think once everybody buys in, we’re going to be fine.”

Peter V’landys on getting US sports bettors interested in rugby league: “We believe it could be one of the big revenue earners for the game.” No doubt. The problem being that every red cent of that revenue comes from some poor bastard somewhere blowing his money. It is an industry with glittering lights up front, but the biggest building blocks are pure misery.

San Antonio Spurs coach Gregg Popovich ripped a Texas school district for observing Christopher Columbus Day: “He initiated a New World genocide. He set in motion what followed, the annihilation of every Indigenous person in Hispaniola, which was Haiti and the Dominican Republic today. He took slaves. He mutilated. He murdered.”

Team of the Week

Chloe McCardel. The Australia set a record for swimming the English Channel after completing her 44th crossing on Wednesday. I know. I don’t quite get it either, but good luck to her.

Wayne Bennett and the Dolphins. Will be together as the 17th team in the NRL from 2023. The Dolphins have been around since 1947, and were Artie Beetson’s original team.

Roger Federer. Is about to drop out of the world’s top 10 for the first time since 2017.

Socceroos. Their impressive winning streak was snapped against Japan.

Oh Canada, Oh Canada. For the first time, miss out on the Rugby World Cup.

Ricky Ponting. His Delhi Capitals' went out in straight sets in the IPL as the
Super Kings and Knight Riders contested last night's final.

France. Won the UEFA Nations League, whatever that is.

RIP Norm Provan, 1931-2021. Passed away this week, nudging 90, after a long battle with dementia. He played in 10 consecutive premierships with the Dragons between 1956 and 1965. His iconic photo with Arthur Summons is the trophy they play for. A genuine gentleman of rugby league. More details at www.rowingaustralia.com.au.