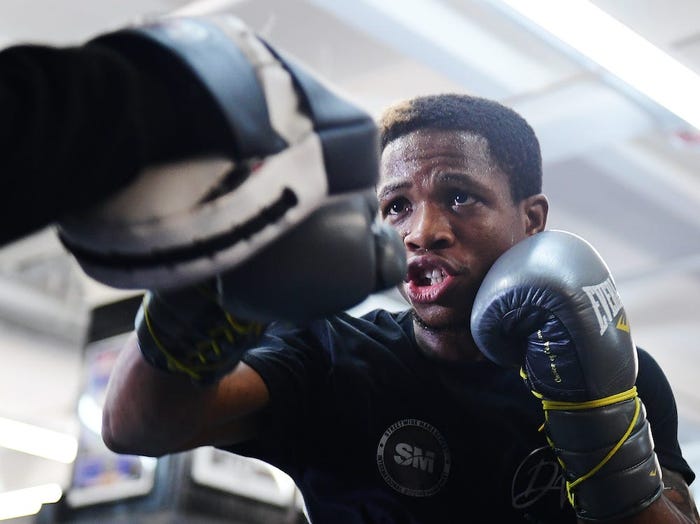 Duke Micah talks a good fight ahead of the toughest challenge of his eight-year pro career on Saturday, September 26.

It is a Premier Boxing Champions event broadcast on Showtime pay-per-view — boxing's biggest event in the pandemic era so far.

But despite the big stage against an opponent who has, for years, been training alongside boxing's modern day great Manny Pacquiao, Micah is unfazed, and told Insider he is coming to conquer.

"I'm doing great, feeling great," he said recently, promising to live up to his nickname as "The Baby-Faced Terminator."

Micah said: "It means I'm coming to destroy. It is a name gave to me, you see me in the ring … that's who I am. I am going to terminate you in the ring."

With a pro record of 24 wins (19 knockouts), unbeaten, it is a nickname that is seemingly deserved because of his ability to throw punches in bunches, with accuracy, against a variety of opponents to date.

But in Casemiro, Micah meets one of the very best operators in the 118-pound weight class, an established champion, and a fighter coming off a big knockout win over Zolani Tete, late last year.

While Micah is respectful of Casemiro, he does not appear overly bothered about the champion's pedigree or prowess.

"He's a good boxer but he hasn't fought someone like me," Micah said. "I know what I'm coming to do. I don't let people take things from me. When I'm in the ring, I conquer.

"This opportunity, somebody who is training with Pacquiao … I'm grateful to fight this guy. He's a true champion.

Micah intends to win, in style, and take the world title back to Ghana

Micah told Insider that little would mean more than being able to beat Casemiro in style, win the world championship, and take the title back to Accra.

He said that he grew up in poverty in his grandmother's house after his mother and father divorced. There was little money, and so only one brother between him and his twin could go to school.

He took that as an opportunity to concentrate on boxing.

"We didn't have much money, come from a poor family," Micah said. "I have a twin brother and I told him, 'Hey man, I can't continue my school,' so he went to a good school, and I went into boxing."

Over the years Micah developed his skills on the amateur scene and in the professional ranks in Africa, Europe, and in America.

Now, he is determined to triumph so that he can celebrate with people in Accra and the Ghana government.

"To have a world title … something that people will like, love … people will be happy," he said.

"Every good person, when you are good, people celebrate you. This is a good thing for me, dream to win, fight [and beat] a good boxer. It's blessed."

Micah and Casemiro's match is one of five championship bouts on the Showtime pay-per-view.