Most of the season, it just seemed this wasn’t their year.

They dropped their first four games, and soon injuries piled up. They lost their most dynamic player before the All-Star break. They lost more games than they won until August, four months into the season.

Yet out of nowhere, suddenly, Atlanta transformed themselves and took off. And on Wednesday (AEDT) they breezed to a 7-0 win over the Astros in Houston, clinching their first World Series title since 1995.

Jorge Soler, who was acquired by Atlanta in July and missed part of the post-season after catching COVID-19, got the party started with a mammoth three-run home run to put Atlanta on top in the third inning. He was named World Series MVP.

Georgia native Dansby Swanson hit a two-run blast in the fifth inning and Max Fried put up six shutout innings, despite having his ankle stomped on early in the game. Freddie Freeman also went deep for Atlanta, who won the best-of-seven series 4-2.

“We hit every problem, every bump you could possibly hit this year,” Freeman said. “Injuries, every single kind of thing that could have happened, that could go wrong, went wrong, and we overcame every single one of those things.”

By the final out, nothing could stop them. Not a broken leg sustained by starter Charlie Morton in the World Series opener. Not a big blown lead in game five.

It was a total team effort. Ailing star Ronald Acuna jnr, the dynamo of Atlanta’s future and a former player with the Melbourne Aces in the Australian Baseball League, watched on from the dugout and at times bounded out to join the celebrations. He went down with an ACL injury earlier in the season.

But despite all the obstacles in their path, and steadied by 66-year-old manager Brian Snitker, an organisation man for four decades, underdogs Atlanta won the franchise’s fourth title.

“They never gave up on themselves,” he said on a post-game victory platform. “We lost a lot of pieces over the course of the summer and it was just the next man up.” 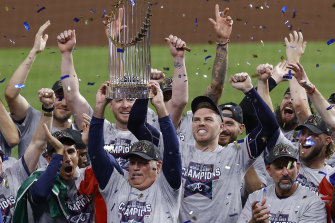 Consider it a tribute to the greatest Braves player of them all, Mr Hank Aaron. The Hall of Fame slugger died January 22 at 86, still rooting for his old team, and his legacy was stamped all over this Series.

How proud “The Hammer” would’ve been.

And note – the Braves out-homered the top-scoring team in the majors by 11-2.

For 72-year-old Houston manager Dusty Baker, the result was a disappointment. But for many fans still rooting against the Astros in the wake of their 2017 sign-stealing scandal, some satisfaction. 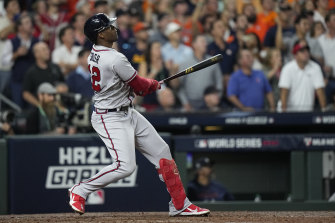 Jorge Soler watches his three-run blast fly out of the stadium.Credit:AP

“Yeah, it’s tough, but you know something? You’ve got to keep on trucking, and that gives you even more incentive next year,” Baker said.

“It’s tough to take now, but this too shall pass. I mean, it really hurts, but it’s over,” he added. 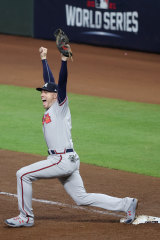 The Astros have played in the World Series three times in the past five seasons. Houston defeated the Dodgers in 2017 and lost to the Washington Nationals in 2019 prior to this year’s defeat.

The Braves defeated Cleveland in six games in 1995 for their first World Series title in Atlanta. They relocated from Milwaukee prior to the 1966 season.

All the Houston hits on Wednesday were singles. The Astros scored just four total runs in their four World Series losses, and they were blanked twice.

Soler was named World Series MVP after becoming the fourth player in Braves history to hit three homers in a World Series. The others are Aaron (1957), Lonnie Smith (1991) and Ryan Klesko (1995).

Swanson’s two-run homer off Cristian Javier was the key blow of a three-run fifth inning. Albies drew a lead-off walk and moved to second on a wild pitch. Swanson came up one out later and sent a fastball over the wall in left field for his second home run of the series.

Blake Taylor replaced Javier and walked Soler before Freeman followed with a run-scoring double off the fence in left centre field to make it 6-0.

Freeman hit a two-out solo homer to centre in the seventh off Ryne Stanek to make it a seven-run margin.