He’s hoping less can be more — and the 22-year-old still looks like a heavy hitter.

Guerrero and Randal Grichuk homered off Domingo German in the Yankee right-hander’s return from a domestic violence ban, and the Toronto Blue Jays beat the Yankees, 3-1, Sunday to win a season-opening series against their A.L. East rival.

A slimmed-down Guerrero had a hit in all three games, including an opposite-field shot leading off the second inning against German.

“He makes the lineup a lot better,” Manager Charlie Montoyo said. “That’s what we think could happen. That was a beautiful swing to go opposite field.”

It was Guerrero’s first homer of the season after he hit .262 with nine homers in 60 games last year. The son of the Hall of Famer Vladimir Guerrero, Guerrero Jr. went on a diet over the winter, and teammates have remarked on his energy this spring.

“I feel a lot better this year,” he said via translator.

“We were coming in with confidence,” Montoyo said. “It’s even better now.”

T.J. Zeuch pitched four scoreless innings for the Blue Jays, and left-hander Ryan Borucki (1-0) got two outs to escape a jam in the sixth. Julian Merryweather got his second save with a perfect ninth.

German (0-1) allowed three runs over three innings in his first appearance since Sept. 18, 2019. He missed all of last season serving an 81-game ban under Major League Baseball’s domestic violence policy after an incident involving his girlfriend, with whom he has at least one child.

German, 28, was applauded by fans in right field when he bolted out of the dugout for warm-ups about 35 minutes before first pitch and got more cheers after completing a 12-pitch first inning.

German repeatedly left the ball up during the second — including on both homers — and was pulled after the third with 68 pitches. He was charged with four hits, a walk and a wild pitch while striking out two.

“It was very exciting to be back on a major league mound and compete,” German said via translator. “I wanted to stay calm and take it all in. Definitely had some issues in the game today, but overall, exciting.”

Right-hander Michael King followed German with six scoreless innings of one-hit ball. King retired his final 15 batters, baffling Toronto with a five-pitch mix. He walked one and struck out three on 68 pitches. He is the first Yankees reliever with at least six innings and no more than one hit since Bob Shirley on Sept. 21, 1986. 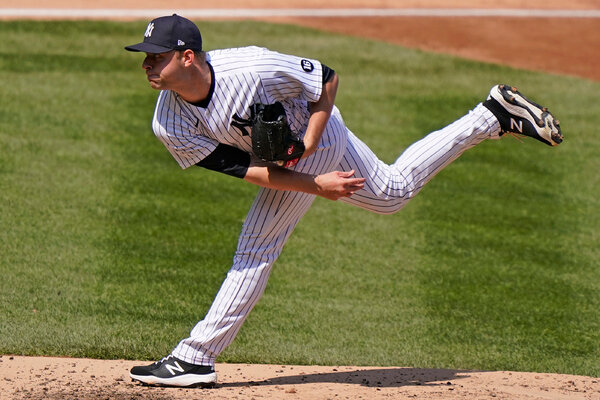 “He’s put himself in a good spot to be a real contributor,” Yankees Manager Aaron Boone said of the 25-year-old.

Bo Bichette became the fastest Blue Jays player to reach 100 career hits, getting there with a first-inning double in his 78th game. Alex Rios had needed 85 games.

Zeuch threw 63 pitches and allowed three hits and a walk with one strikeout. Right-hander Trent Thornton gave up a run in the fifth and was pulled in the sixth after losing a couple mph on his fastball. He allowed Gleyber Torres’ double before Borucki retired Jay Bruce and Gary Sánchez to end the inning.

Brett Gardner had run-scoring groundout in the fifth for the Yankees.