Champions League final WILL be played in Portugal after Government refused to waive quarantine for UEFA VIPs at Wembley – and flight prices to Porto have already TRIPLED with around 10,000 tickets available for Chelsea and City fans

The Champions League final will now be staged in Porto in Portugal after the UK government and UEFA could not reach agreement over quarantine exemptions for more than  2,000 VIPs, staff and media for the match to be played at Wembley. It will be officially ratified by UEFA on Thursday.

The all-English final between Manchester City and Chelsea was originally scheduled for the Ataturk Stadium in Istanbul on May 29.

UEFA was forced to look at alternative venues after a devastating Covid outbreak in Turkey caused the UK government to place the country on its red list for travel, and banned English fans from going.

And the 50,000-capacity Estadio do Dragao in Porto has now been lined up as the venue for the final after UEFA struck a deal with the Portuguese authorities over the attendance at the match. Chelsea and Manchester City will each receive a ticket allocation of between 4,500 and 6,000.

But health experts and MPs have criticised the decision for putting supporters at unnecessary risk in the middle of a pandemic, insisting UEFA should have foregone VIPs this year and made it a ‘fans’ final’ in London. 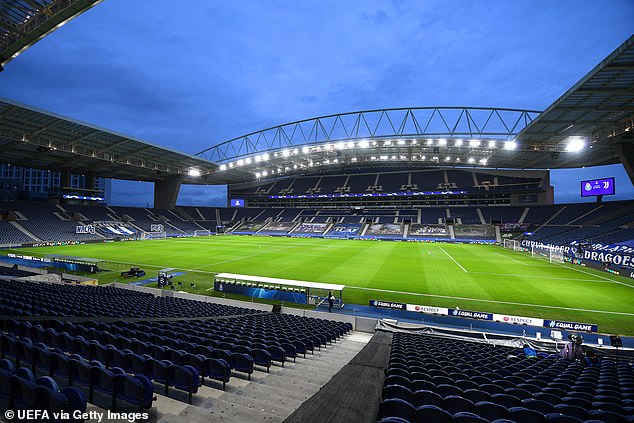 The 50,000-capacity Estadio do Dragao in Porto has been lined up as the venue for the final 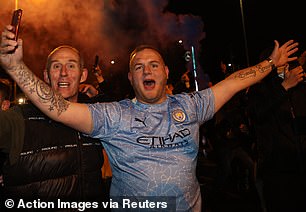 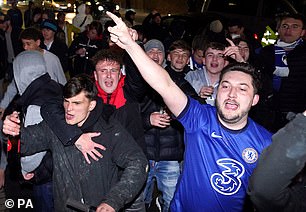 Chelsea and Man City fans celebrated their fantastic semi-final triumphs last week. They are now destined for Portugal, after the Champions League final on May 29 was moved 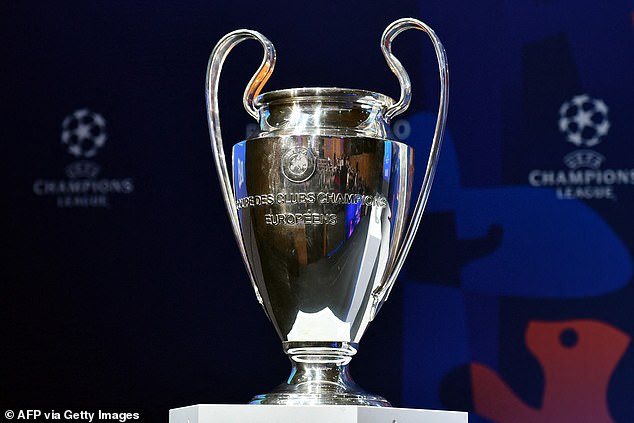 Hopes were initially high that the match would come to Wembley and the UK Culture Secretary Oliver Dowden and UEFA President Aleksander Ceferin both appeared committed to making the switch, but they could not find enough common ground to make it work, with concerns over the UK’s quarantine rules.

After lengthy talks, officials from both sides had to accept defeat.

As well as experts and MPs, fans had also demanded the match be played at Wembley, which could have hosted 22,500 fans for the final.

The Chelsea Supporters’ Trust urged Ceferin at a meeting on Wednesday afternoon, to explore ‘all possibilities’ in London before making a decision.

But Dom Rosso, the trust’s vice chairman, posted on Twitter that Ceferin had also emphasised the importance of accommodating sponsors, which suggested Wembley’s star was fading.

Such was the intense nature of the negotiations that Ceferin left the fans’ Zoom call to make further phone calls as he sought to finalise the location and attendance for the match. 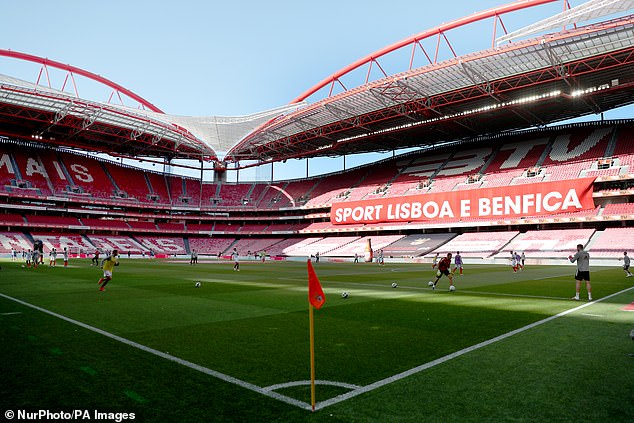 Lisbon’s Estadio da Luz, which hosted the 2020 final, was also initially viewed as a contender

A late sticking point in Portugal was how many fans would be allowed to attend. Portugal is yet to let any supporters return to matches and UEFA wanted the authorities to scale up quickly to enable them to make significant allocations to clubs and sponsors.

The selection of Porto will at least allow supporters to make firm plans.

Portugal has been placed on the UK’s ‘green list’ for travel, which means supporters will be able to fly there and back with minimal restrictions and will not have to isolate on their return. 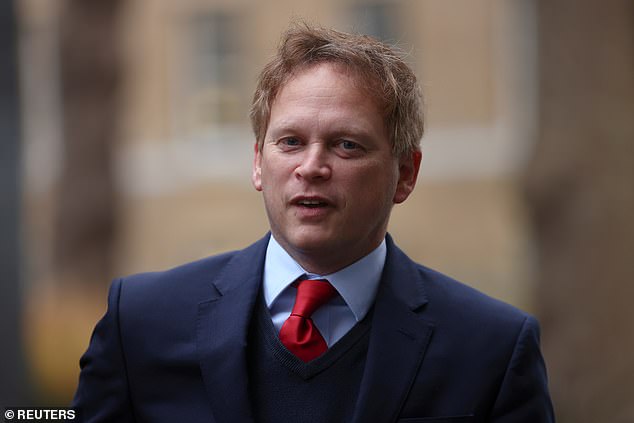 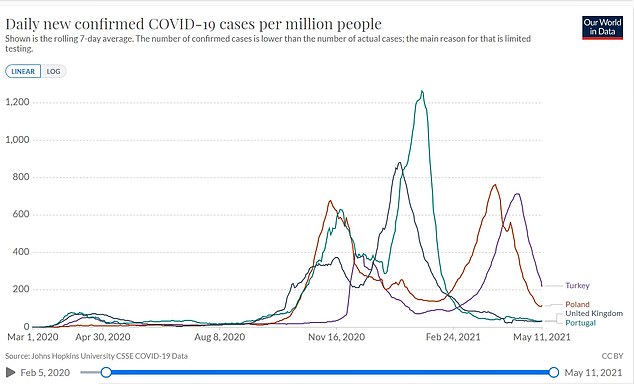 Daily covid cases  in Portugal are similar to the UK, with both much lower than Turkey. Poland, where the Europa League final will be played is also shown in the graphic. Source: Our World in Data/ John Hopkins University

Supporters have wasted no time in organising their trips. Flight prices to Portugal rocketed this week even before the Wembley talks had concluded.

A return direct flight at midday for the weekend of the game from Stansted to Porto was available for £200 on Tuesday morning, but rocketed three-fold to £623 by Wednesday afternoon.

Cheaper fares are still on sale for people willing to travel early in the morning or using indirect routes.

Lisbon flights have also increased, as speculation initially suggested the Portuguese capital could stage the game. Flights bought on Monday evening for £160 had soared to £309 – an increase of 93% – by Tuesday morning as fans began to realise Portugal was a more likely destination.

Flights from Manchester have also risen sharply week on week.

The prospect of Wembley hosting the showpiece were dashed because more than 2,000 VIPs, staff and media due to attend the game would require an exemption from the UKs covid travel restrictions.

The rules require visitors from red and amber list countries to isolate for 10 days and they are due to come into force from May 17. They were announced by Prime Minister Boris Johnson on Monday. 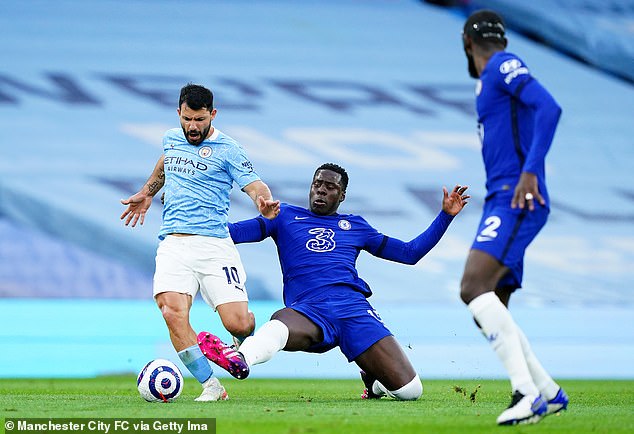 Manchester City and Chelsea will face off in the fixture, which was set to take place in Istanbul 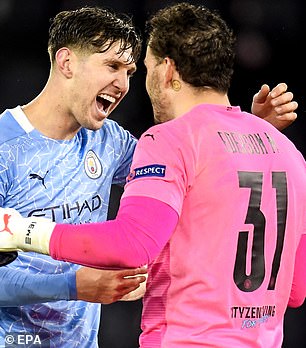 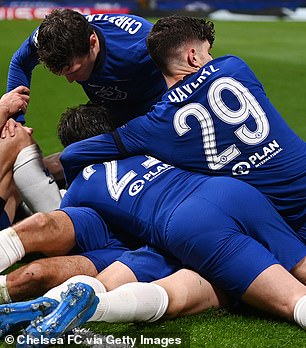 Turkey is on the red list and most of Europe is on the amber list, including Switzerland, where UEFA is based.

Sources told Sportsmail that while the talks were constructive the European governing body’s requirement for up to 2,000 guests, including sponsors and representatives of more than 50 football associations from across the continent, as well as staff, could not be accommodated.

It is currently still illegal for Brits to travel abroad for non-essential reasons but this will change on May 17, when people will be allowed to fly to countries with low Covid infection rates.

Travellers to countries on the ‘red list’ will have to quarantine for 10 days in a government-approved hotel on their arrival in the UK.

Those coming from ‘amber list’ countries, which includes Switzerland, where UEFA is based, will be required to self-isolate at home for 10 days, taking covid test on day two and eight.

While those returning from countries on the ‘green list’, which is set to include Portugal, will not have to isolate, but will have to take a test

It is understood, the English FA could scale up the attendance at Wembley to the 22,500 requested by UEFA and quarantine exemptions could have been provided for essential staff, but the number of additional guests would have been too great given the UK is about to emerge from lockdown.

This afternoon, Culture Secretary Dowden said the UK had ‘cleared the way to get Wembley available if UEFA want to take advantage of that’ but indicated the government would not bend on quarantine rules.

‘It is though important that we protect the integrity of our quarantine system,’ he added.

On the flipside, VIPs are tied into lucrative sponsorship contracts and UEFA felt it could not abandon a valuable source of income, after 14 months of matches mostly without fans or sponsors present.

The situation has been compounded because capacities have been cut drastically for the Euro 2020 tournament due to begin in June.

‘UEFA needs the VIP revenues,’ a source close to the negotiations told Sportsmail. ‘They are losing money on the Euros. There is no way they would give up on VIPs. They are connected to sponsorship.’

At his meeting with fan groups, UEFA president Ceferin reaffirmed his view that sponsors needed to be accommodated.

And if the game was going anywhere, Portugal has the advantage that it has relatively low numbers of covid cases. There are currently fewer coronavirus infections than in Britain, with 32 cases per million people daily.

But UEFA’s position has drawn criticism from health experts and MPs who said the governing body should have made an exception on VIPs and dignitaries because of the coronavirus pandemic. 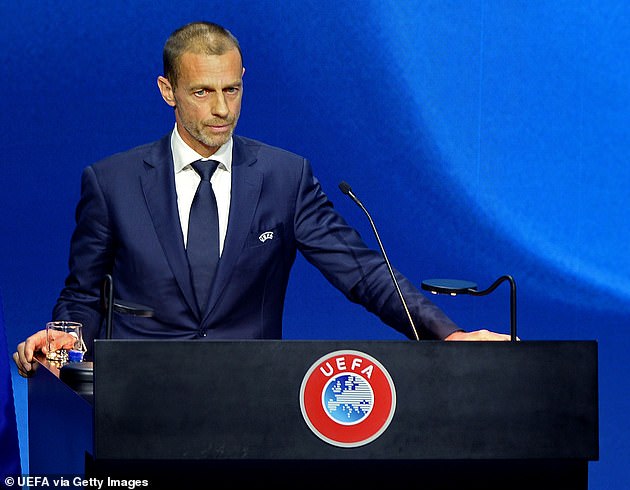 UEFA’s president, Aleksander Ceferin, met with Culture Secretary Oliver Dowden  to discuss the Champions League final being held at Wembley, but the pair could find no agreement

It would be safer to host the all-English match in London and avoid large-scale movements of people.

‘It is not in the real world,’ MP Clive Efford, who is a member of the Department for Culture Media and Sport Select Committee, told Sportsmail. ‘We have two clubs from the same country, which is capable of hosting this match during a global pandemic. Why are we taking it to a third country?

‘You can only imagine that [VIPs and sponsorship] is too valuable for them to forego… but once again, this is football finance taking over the interests of fans.’

Paul Hunter, professor of medicine at the University of Norwich, said: ‘From a public health perspective, the safest thing would have been to have the match in London and for UEFA not to bring people to the game who are not essential to the running of the game. 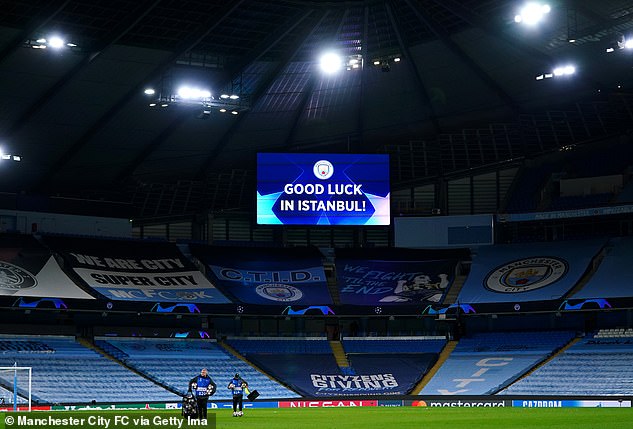 The LED screen inside Manchester City’s Etihad Stadium displayed a message of ‘Good luck in Istanbul!’ after the club beat Paris Saint-Germain in the semi-final, but plans changed quickly

‘With rules we have got in place it could have been managed as a fans final in a way that did not make it that much of a risk. No more risk than we would expect from other events that are going on.

‘The UK government was right about not bending the rules.’

Hunter believes there is ‘significant risk’ that concerning Indian variants of coronavirus could be spread to Portugal, which is currently free of those strains. 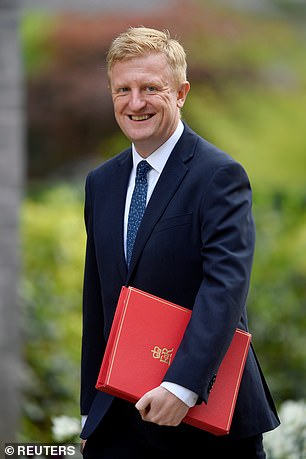 Meanwhile, Professor Keith Neal, an expert at the University of Nottingham, is concerned Manchester City and Chelsea fans will be placed at additional risk.

‘UEFA are clearly not putting fans first,’ he told Sportsmail. ‘UEFA are putting themselves first. They should play the game in London. I understand there is an issue around money but surely there is insurance. Wembley is huge you could easily have 20,000 fans in there. The problem is UEFA want 2,000 hangers on.’

Conservative MP Steve Brine, who also sits on the DCMS committee, said on Tuesday that fans should be prioritised over the ‘prawn sandwich’ contingent.

‘We’ve all had to make sacrifices in the last year and we’ve missed things far more important than a game of football,’ he told Talksport

‘So if the game goes ahead with the fans, and without some of the officials with their prawn sandwiches, well then, for a league (UEFA) that is interested in primarily the fans, that shouldn’t be a big ask should it?’

This year’s final had been due to take place at the 76,000-capacity Ataturk Stadium in Istanbul, but UEFA had to consider alternative plans when the UK placed Turkey on its red list for travel and told fans they could not go to the match. 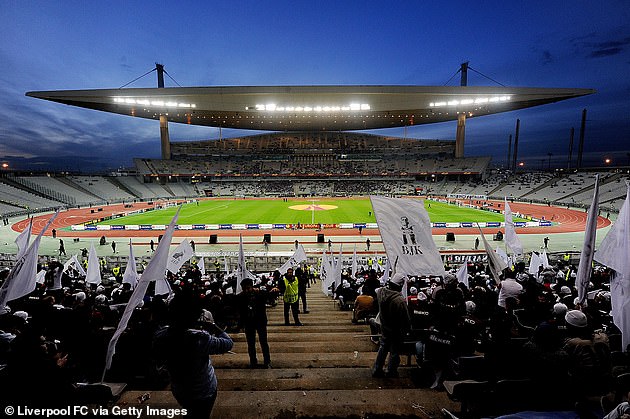 A total of 25,000 were expected to attend the Champions League final at the Ataturk Stadium

Turkey has suffered a devastating second wave of coronavirus infection recording 60,000 cases per day last month. Even now, the country has 225 confirmed covid cases per million people daily, compared to 33 in the UK.

In some ways, the selection of Portugal to host the final is history repeating itself. Last year, the pandemic forced the latter stages of the competition – from the quarter finals onwards – to shift from Turkey to Lisbon.

Turkey is expected to be offered a further opportunity to host the prized fixture in 2023 or 2024, the year it is due to be held at Wembley. 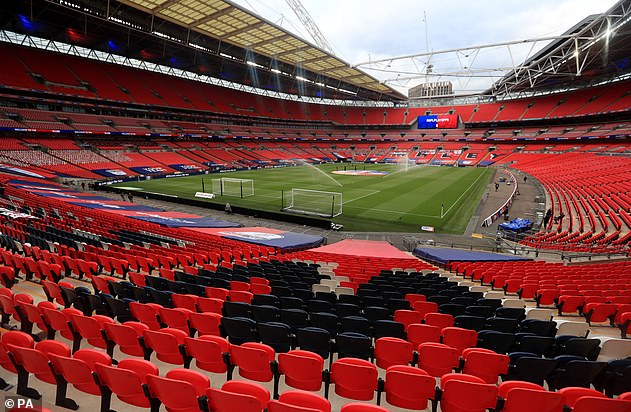 Chelsea booked their place in the final by overcoming Real Madrid in the semis, while Premier League champions City defeated French giants PSG.

City manager Pep Guardiola is bidding for his first Champions League title in 10 years while for his team, this is their first appearance in the final of Europe’s elite club competition.

Chelsea won the tournament back in 2012, defeating Bayern Munich on penalties.

The weekend after they both reached the final, City and Chelsea met in the Premier League with Thomas Tuchel’s side winning 2-1 at the Etihad stadium.