Home » Sport » Chris Froome accident: Four-time Tour de France winner has broken bones before in horror crashes and was once rammed off the road by a motorist

CHAMPION cyclist Chris Froome has had plenty of nasty crashes through out his career but had always managed to escape serious injury.

Until the worst accident of his life on Wednesday. 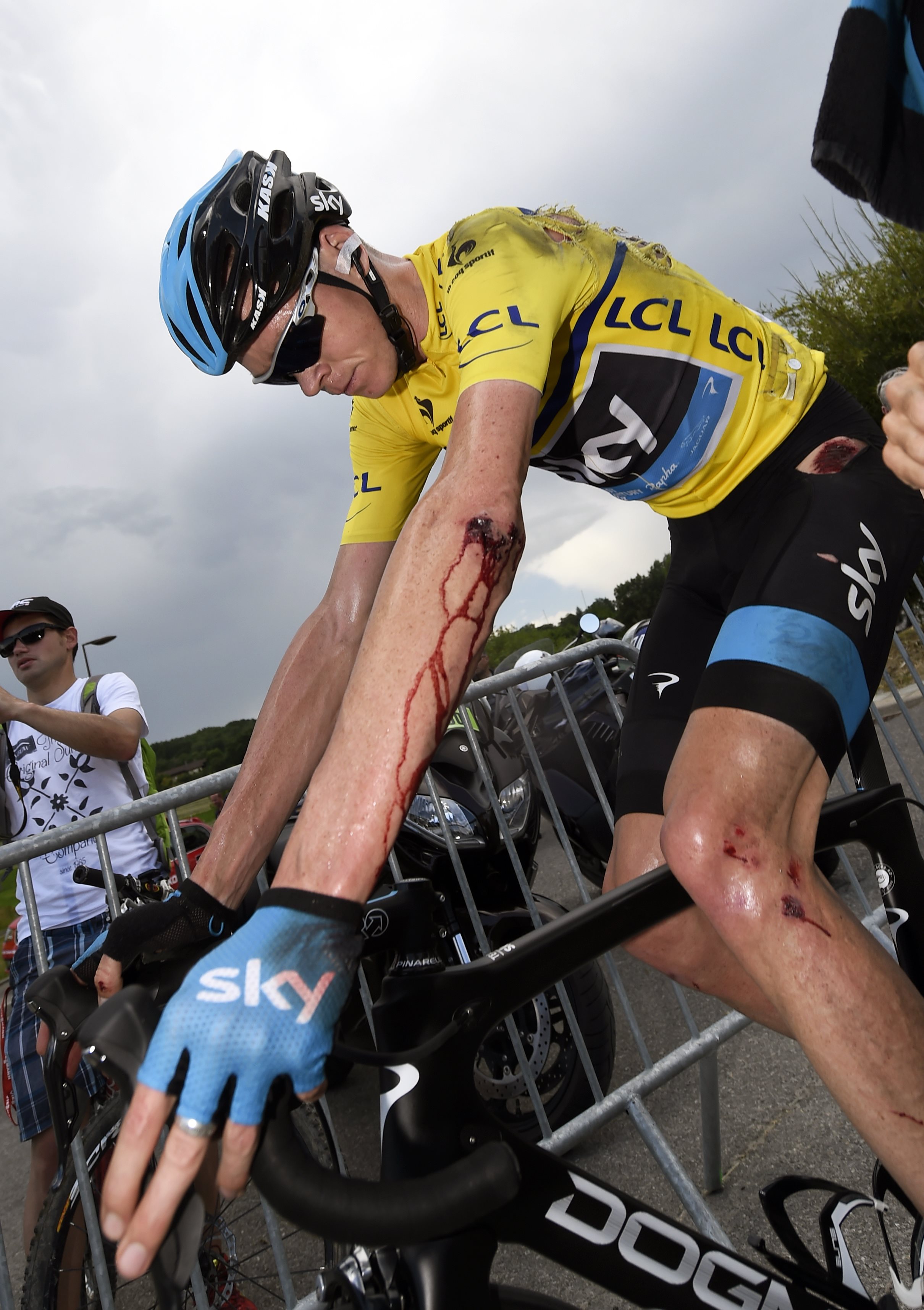 The four-time Tour de France winner, is currently in intensive care after hitting a wall at 40mph during a warm-up at the Criterium du Dauphine, France.

Team Ineos member Froome, 34, is said to have broken his leg, elbow and ribs in the high-speed crash.

Unfortunately for Froome, luck wasn't on his side at this year's Criterium de Dauphine.

After taking his hands off the handlebars to blow his nose, a gust of wind suddenly caught his front wheel which caused him to hit a wall.

He was immediately airlifted to Saint-Etienne University Hospital for surgery, where he is in intensive care.

Froome is almost certainly out of this year's Tour de France.

The cyclist has endured crushed bones before, and suffered many scrapes during his incredible career.

Five years ago, Froome had to pull out of his favourite race, a year after he was the victor, after crashing at stage four of the 2014 Tour de France.

He suffered a fractured left wrist, and broke a bone his right hand and his title defence was over.

Pictures also showed a nasty scrape on his leg with the Lycra of his cycling shorts torn. 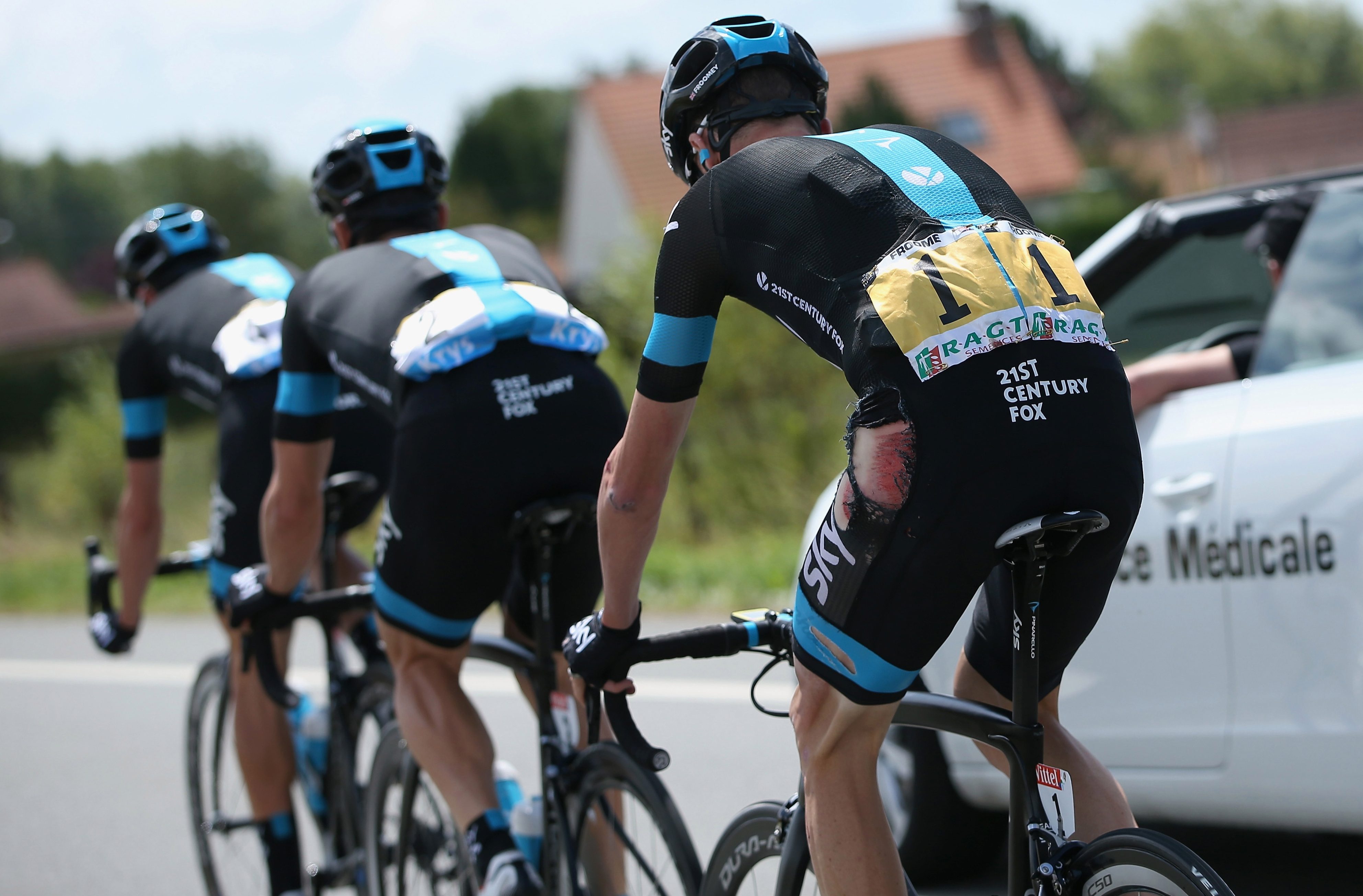 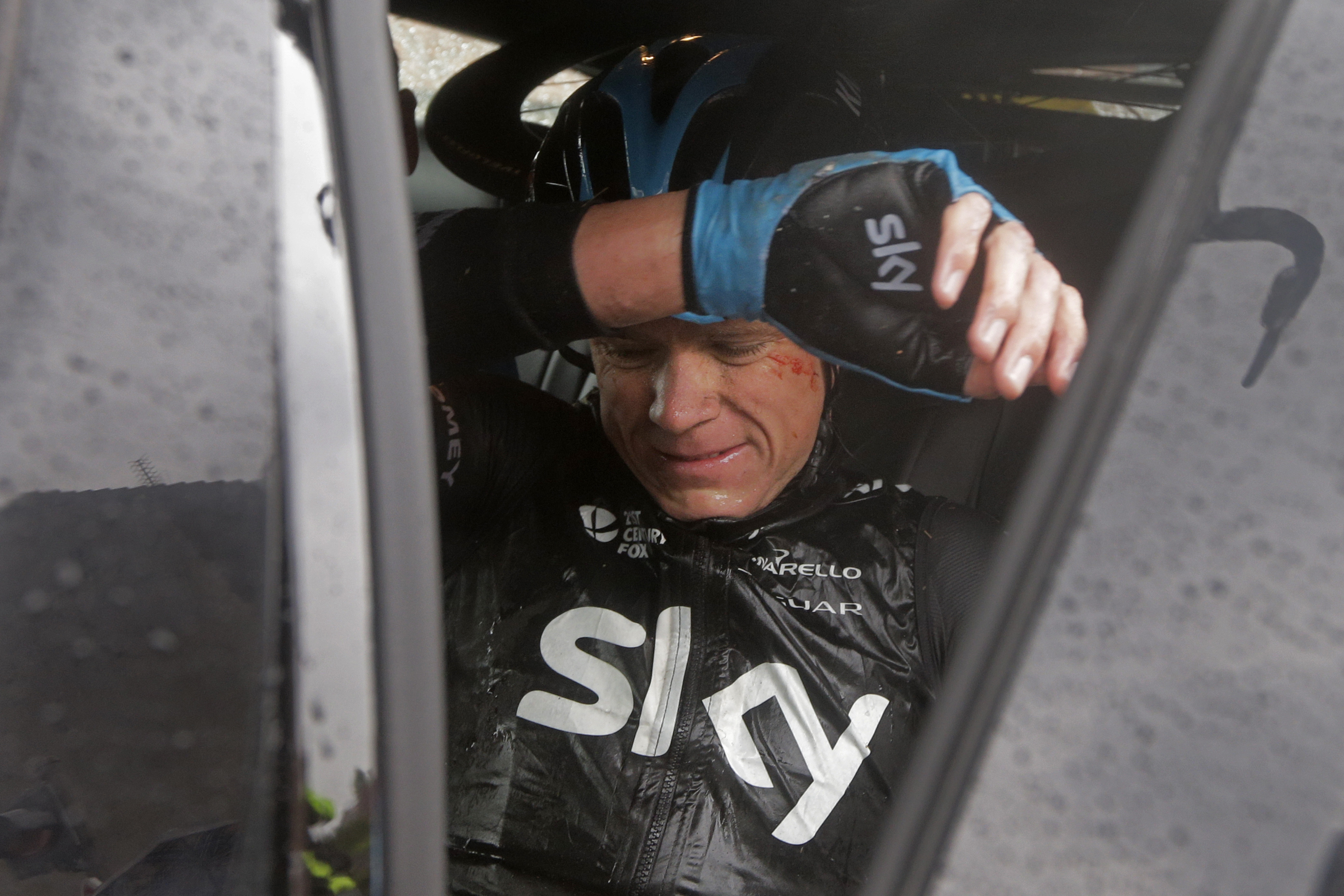 Another race, another fractured bone.

In the 11th stage of the Vuelta a Espana, Froome was knocked sideways into a barrier and a stone wall in the Pyrenees.

He managed to struggle home, but scans revealed that he had fractured a bone in his foot and his race was over. 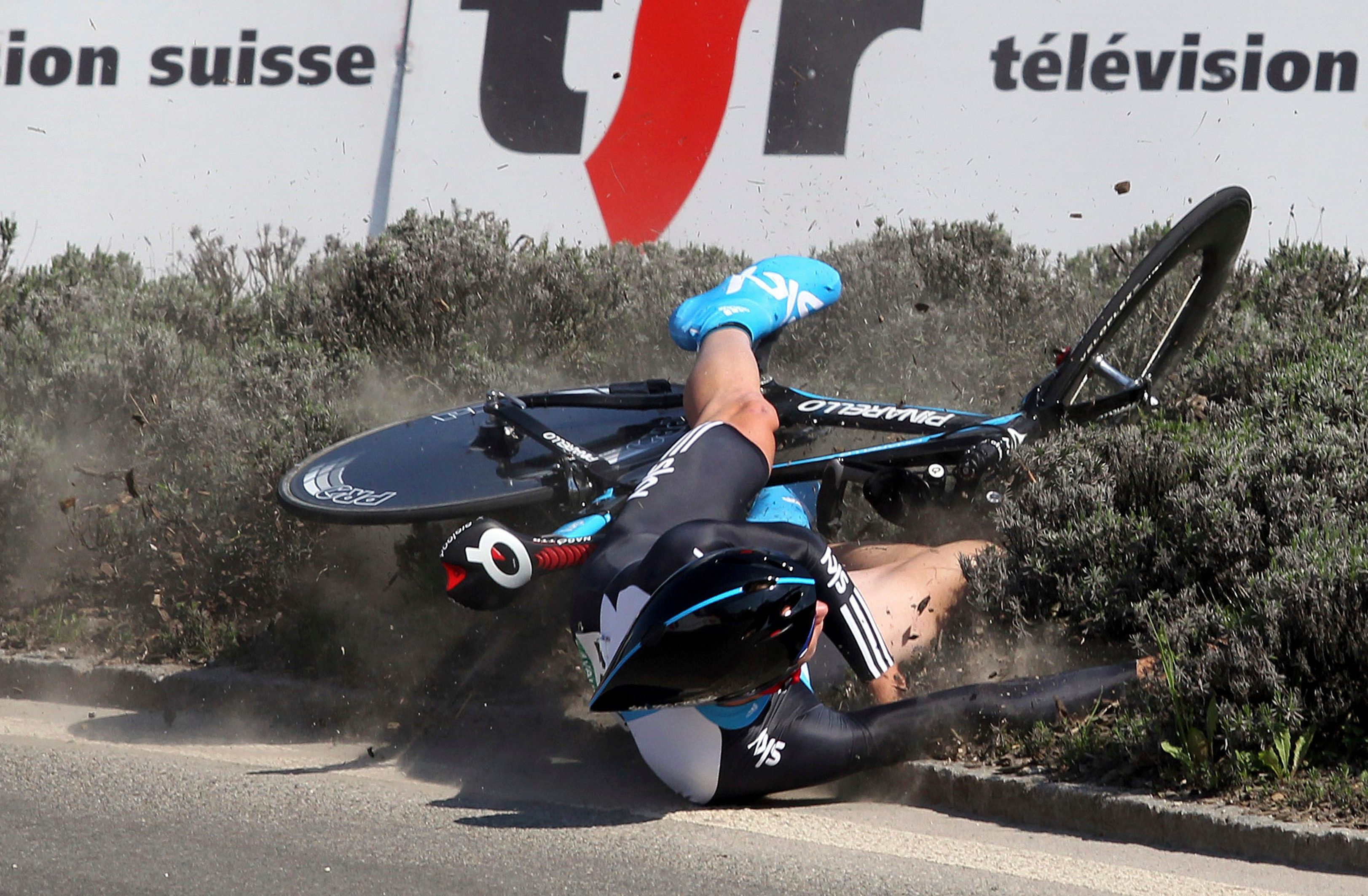 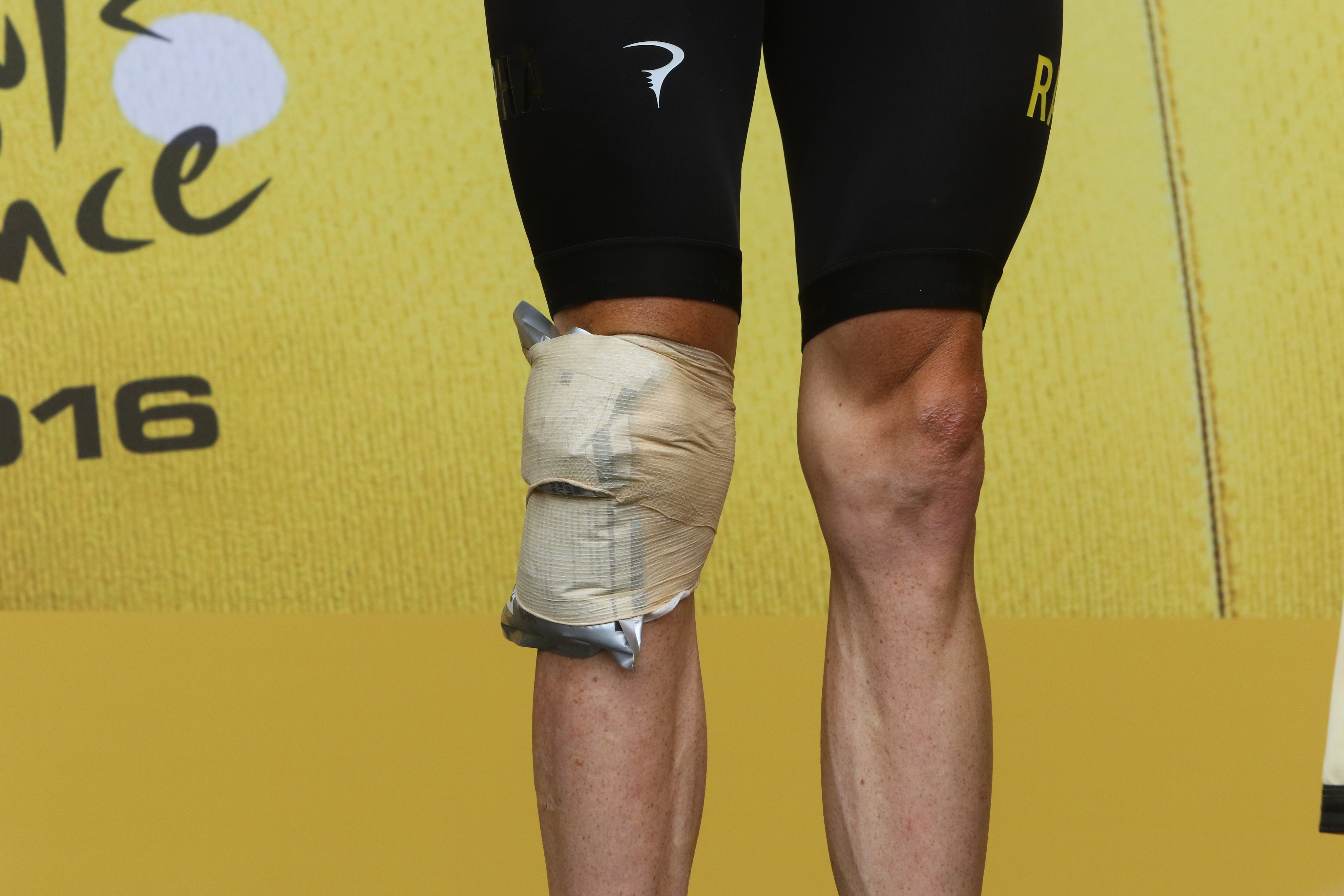 RAMMED BY A MOTORIST

In 2017, Froome was very lucky to escape unharmed when a car rammed into his bike.

He uploaded an image to Twitter, showing the devastation, and wrote: "Just got rammed on purpose by an impatient driver who followed me onto the pavement!

The incident happened on the roads around Beausoleil, France, where Froome likes to train. 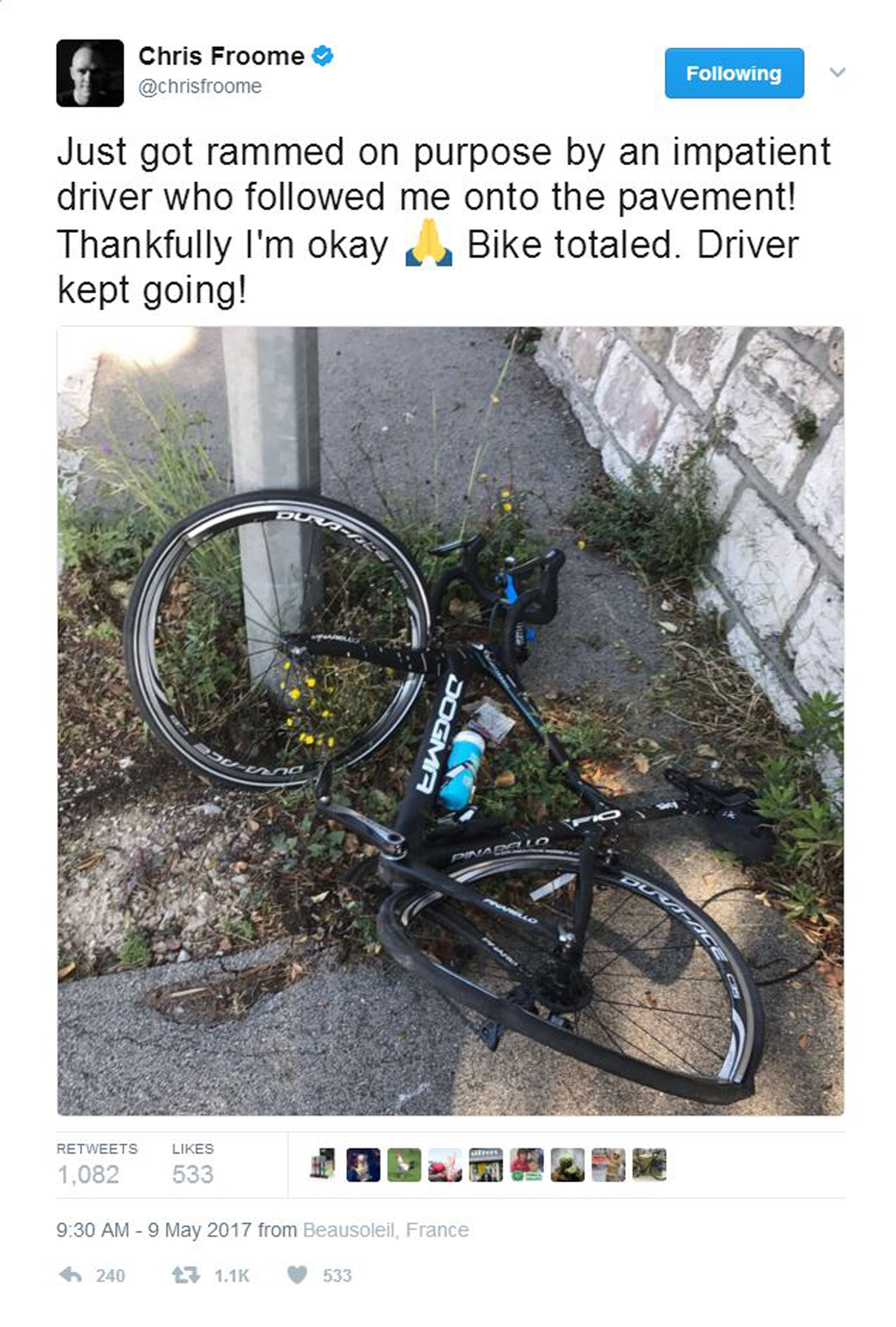 In the final 10km of the famous race, Froome went over the handle bars of his bike after a dramatic crash.

He escaped injury, and managed to minimise his losses in the end, but it could've been far worse.

Video captured by a camera on Jasper De Busyt's bike captured Froome brushing shoulders with Katusha-Alpecin rider Rick Zabel as the the road swung left and the peloton moved right.
Froome had no option but to crash into a ditch, narrowly avoiding a bollard. 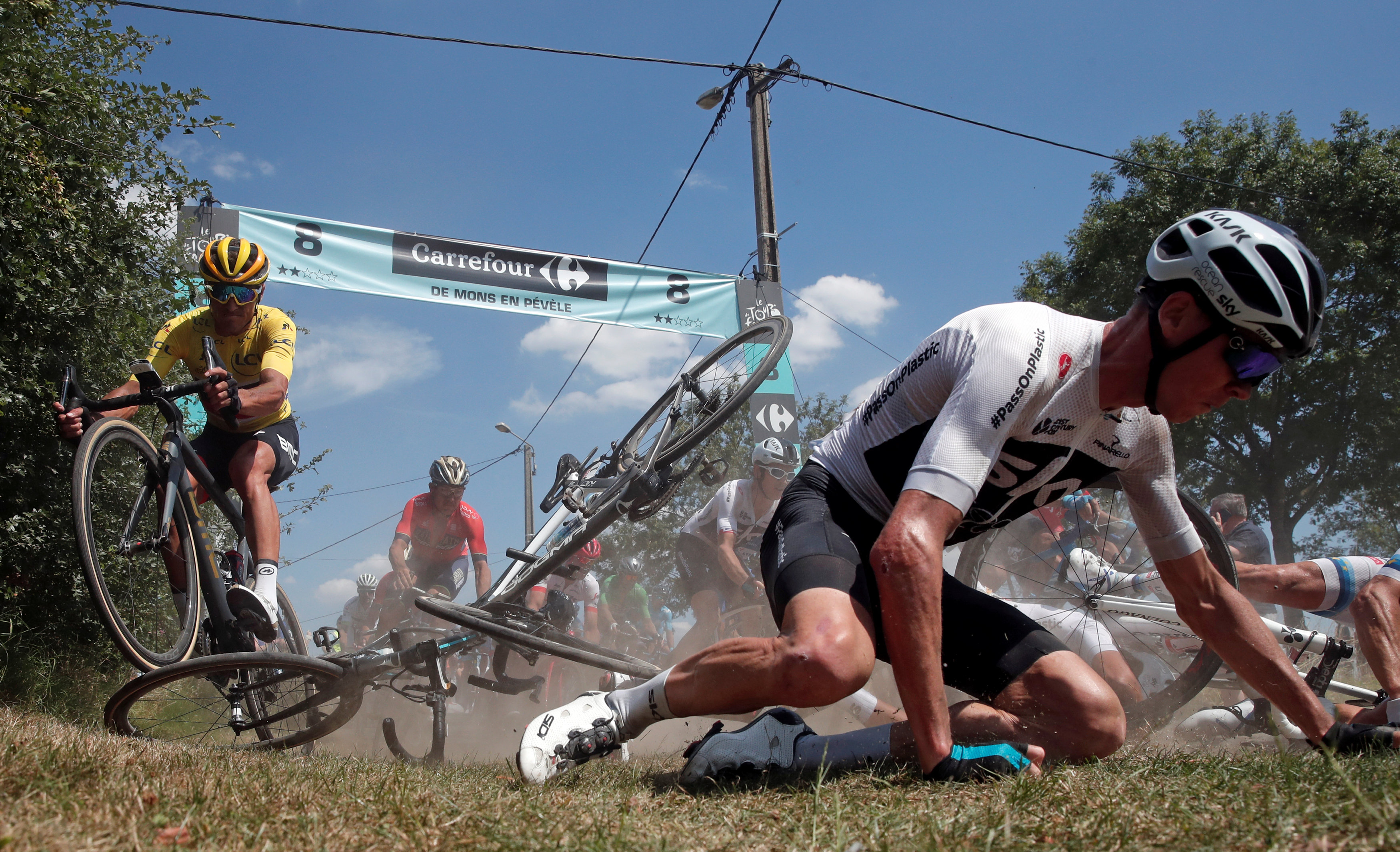 Froome suffered cuts and bruises after crashing during a reconnaissance ride at the 101st Giro d'Italia in Jerusalem last year.

Patches of Lycra were notably ripped from his skinsuit around his right hip and underneath his right shoulder, and he also had a bloody knee.

Again, the then Team Sky racer escaped relatively lightly and was able to continue to compete in the race. 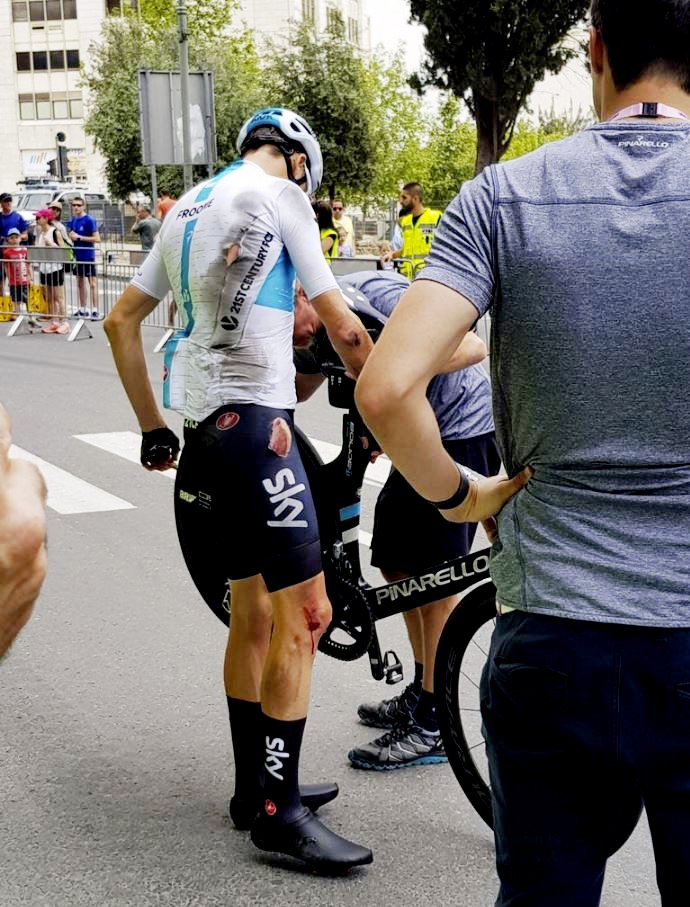 Luck was on Froome's side after he suffered a crash during a training ride near Johannesburg, South Africa last year.

A nasty-looking wound on his elbow aside, the cyclist managed to avoid a more serious injury.

However, he was keen to show his followers on social media that despite being bruised and battered, he was fine. 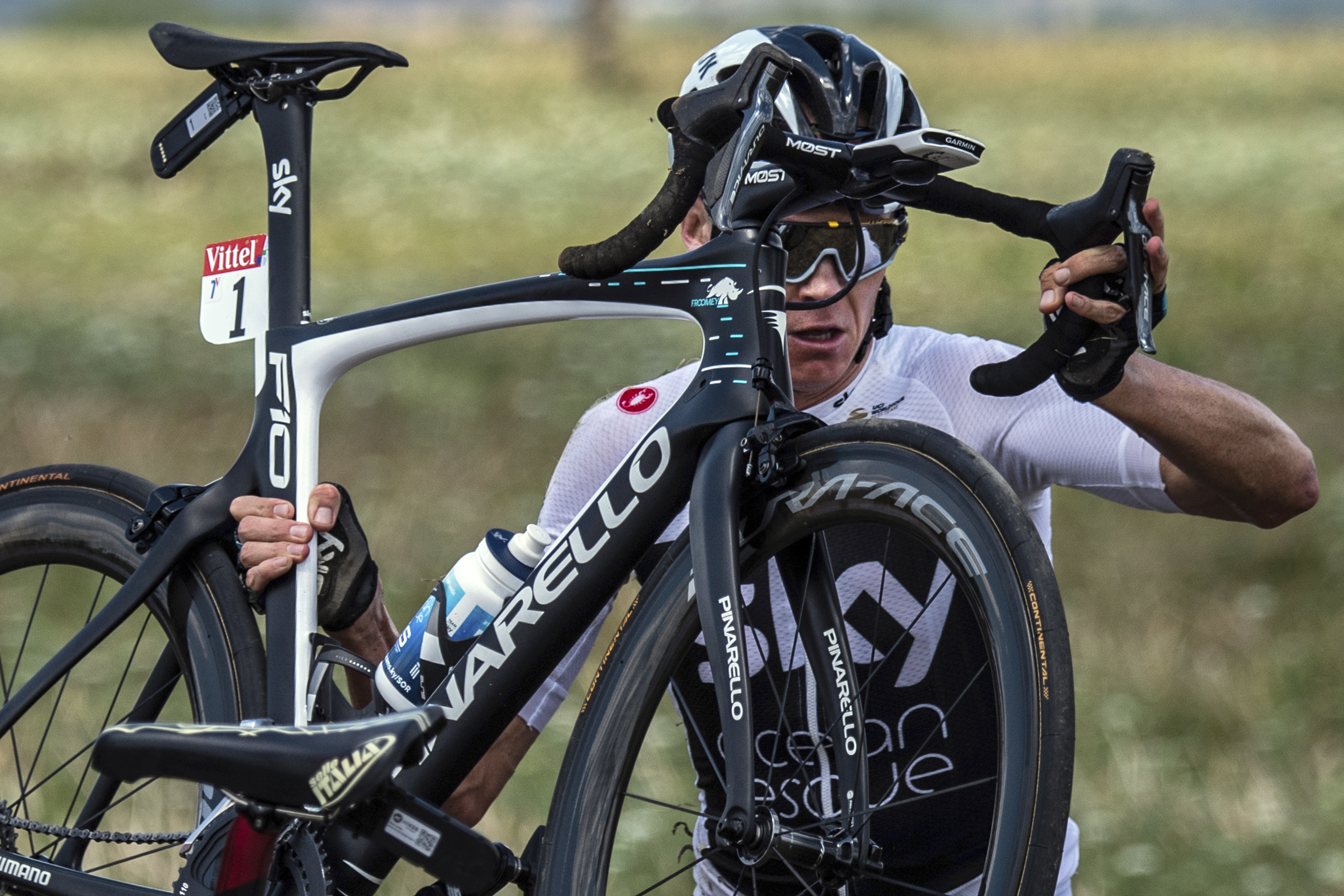 Froome has had previous at the race that takes place in France and Switzerland.

Five years ago Froome crashed at the sixth stage en route to Poisy at the foot of the Alps.

According to his rival Vincenzo Nibali, Team Sky underestimated a series of curves, Froome braked to correct his path and came off his bike.

Froome later said that the roads were uneven and there was gravel on top.

Miraculously, he finished the stage the same time as his rivals, with his left side and back scraped and bloody, but nothing was broken and he was able to continue. 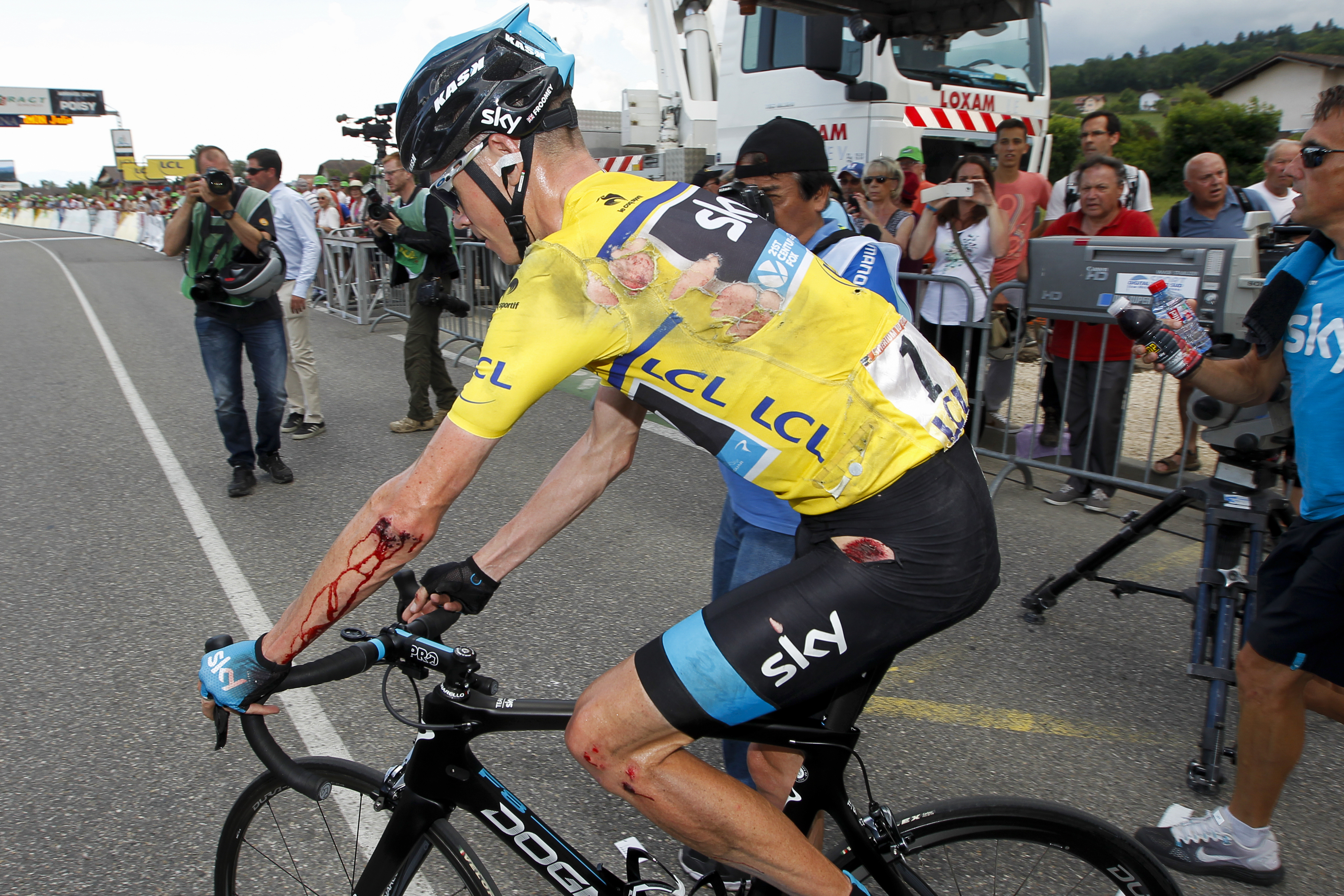 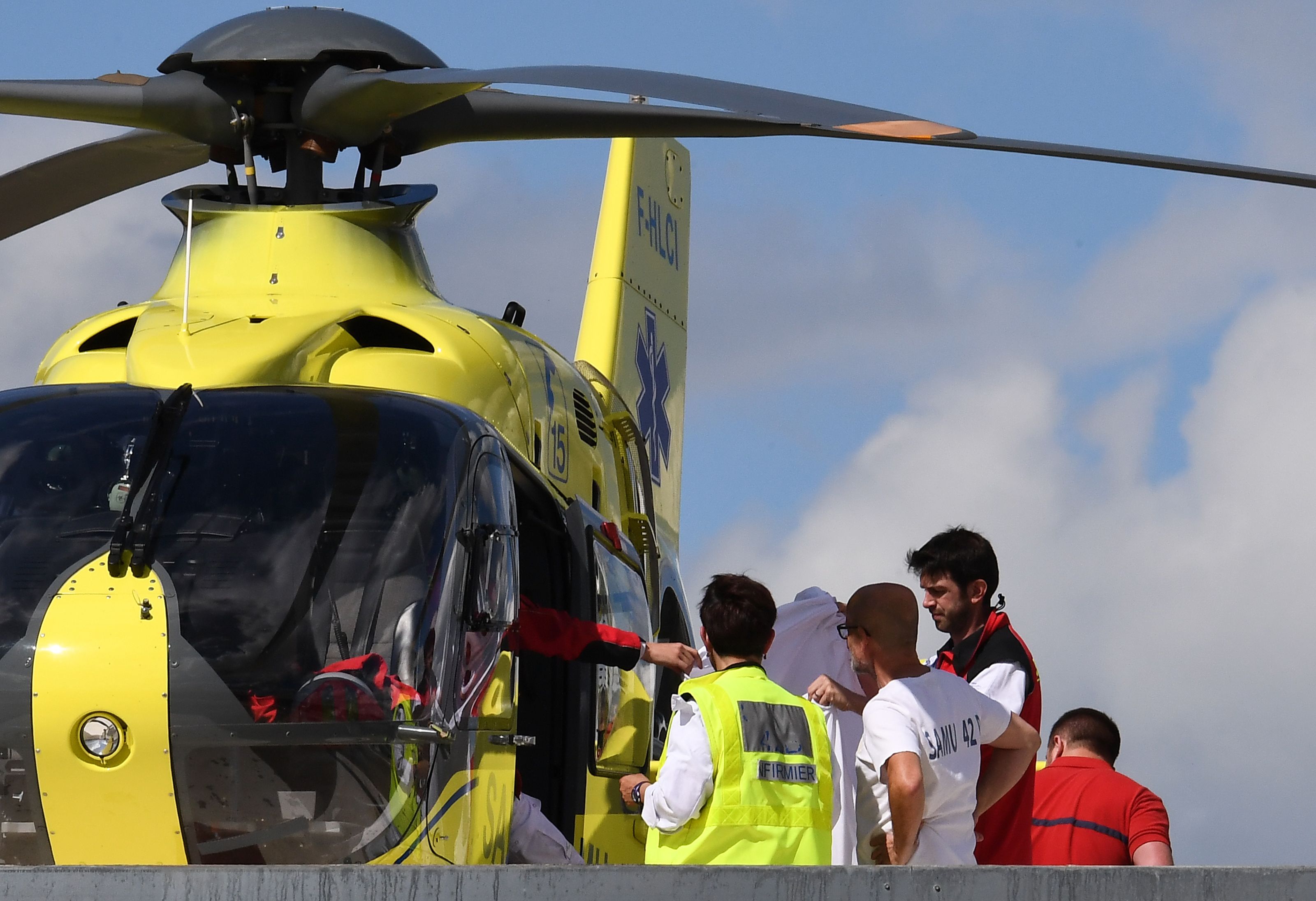 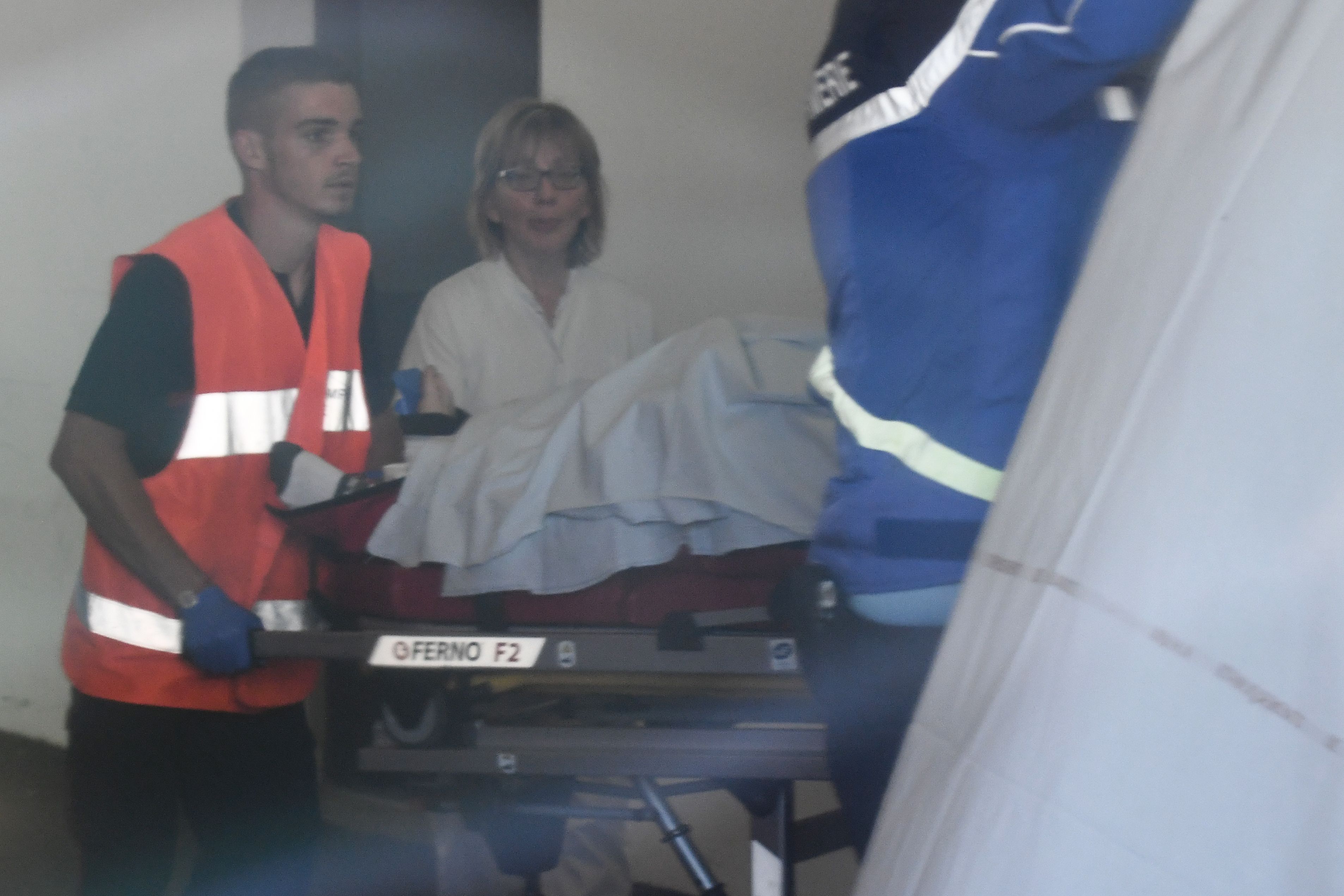