The Sunshine Coast Lightning survived a spirited second half fightback from the Melbourne Vixens to take the points in a closely-fought Super Netball Mother’s Day clash at John Cain Arena on Sunday afternoon.

The Lightning led at every change to see off the Super Netball reigning premiers by five goals in a game they initially looked like winning comfortably but in the end scrambled to control. 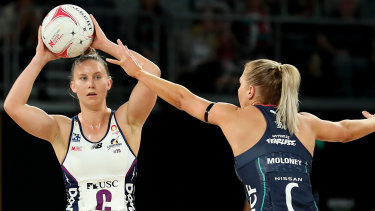 Mahalia Cassidy of the Sunshine Coast Lightning in action during the round two Super Netball contest against the Melbourne Vixens at John Cain Arena.Credit:Getty Images

The victory makes it two wins from two outings this season for the Lightning, who sit atop the ladder in these early weeks of the season.

The Vixens, who lost to the West Coast Fever last week, now languish in the ladder’s lower reaches but there was plenty to like about the way they fought back when their opponents looked to be in the driver’s seat at half-time.

Having had two home games to start the new campaign, Simone McKinnis’s Vixens will need to turn things around quickly ahead of their first road trip of the season when they face the Swifts in Sydney next week.

Lightning goal attack Cara Koenen was dominant in the early stages and was a key figure as her team took charge.

In the first half she was too big, too mobile and too accurate for the inexperienced Vixens rearguard, who tried various combinations at the back in a bid to staunch the flow.

The visitors were tighter in defence and more free-flowing in attack in the first half, in which the Vixens turned the ball over too often and failed to capitalise on their own attacking possession.

The Lightning’s intensity at the ball was also a factor as they put pressure on their opponents all over the court, and when they went to the main break leading 31-20 it seemed a long way back for the champions.

But this is a Vixens team rebuilding after the loss of key players and they showed plenty of character to dig in and get themselves back into the contest with at least the hint of a chance in the third quarter, outscoring the Lightning 16-15 with Ruby Barkmeyer’s double-point super shot giving them hope. 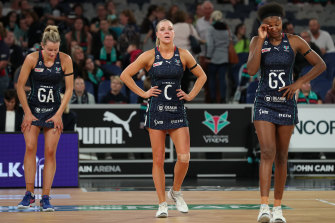 The reigning premiers, the Vixens, have started the new Super Netball season 0-2 after a five-goal loss to the Lightning.Credit:Getty Images

The hosts came out strongly in the final stanza as Barkmeyer and Mwai Kumwenda scored early to close the gap to eight goals with 13 minutes remaining.

The Vixens were finishing fast and hard, with Kumwenda to the fore as the visitors battled to stem the onslaught. But despite Kumwenda’s best efforts they just came up short, 56-51.