South Korea’s double Olympic short track gold medallist Shim Suk-hee has been excluded from training with the national team amid a probe into text messages she sent during the 2018 Games that suggested she may have intended to take down a teammate.

An online newspaper last week revealed messages exchanged between Shim and a coach during the Games in which she ridiculed her teammate Choi Min-jeong and said she might try to create a “female Steven Bradbury” if things were not going her way. 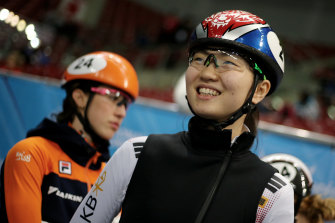 Shim Suk-hee is barred from training with teammates during an investigation into messages she sent in 2018.Credit:Getty Images

Bradbury won gold for Australia in the men’s 1000 metres at the 2002 Winter Olympics after all the other competitors crashed at the last turn.

In the 2018 women’s 1000-metre final in Pyeongchang, Shim and Choi became tangled up and fell over at the final corner, with Shim being disqualified and Choi finishing fourth.

Yonhap news agency reported on Monday that the Korea Skating Union (KSU) planned to investigate whether there had been any intent on Shim’s part.

The report said the KSU had “separated” her from the national team at a training centre in the central city of Jincheon where they are preparing for qualifiers for the 2022 Beijing Winter Games.

Shim will not be able to compete at the International Skating Union short track speed skating World Cup, which is scheduled to begin in Beijing on October 21 and determines quotas for the upcoming Olympics, the report said.

“We’ve concluded after consulting the athletes, including Shim herself, and coaches that it would be difficult to train together in this situation,” a KSU official was quoted as saying.

Shim apologised on Monday while Choi’s management agency has called for an investigation.

“I’d like to sincerely apologise for disappointing and hurting many people with my immature actions and words,” Shim said.

However, she denied taking down Choi on purpose, saying it was “just unfortunate we crashed into each other”.

Choi’s agency issued a statement urging the KSU to provide protection for her and to conduct an investigation into the crash at the Games.