Baseball’s long history has allowed ample opportunity for wackiness. It is, after all, a sport in which the coaches wear the same outfits as the players, the action runs counterclockwise and stealing is not only legal, it is encouraged.

Few moments in the sport, though, could top one that occurred in the top of the third inning on Thursday in Pittsburgh. Chicago Cubs shortstop Javier Baez, 28, once again proved that his nickname, El Mago (The Magician in Spanish), is a fitting one. And the Pirates, with a series of head-scratching miscues, enabled one of the zaniest plays in baseball history, leaving fans in disbelief even after multiple replays.

“Only Javy disappears more on the basepaths than anyone I’ve seen,” Cubs Manager David Ross, who played in parts of 15 major league seasons, said after his team’s 5-3 win. “He just creates havoc, man. I’ve never seen anything like that in my life with as many games I’ve been able to be a part of.”

With two outs in the inning, Baez hit a ground ball to Pirates third baseman Erik Gonzalez. Cubs catcher Willson Contreras, who was on second base after a single and a stolen base, ran toward third. But that shouldn’t have mattered because, with just one more out needed to end the threat, Gonzalez threw the ball across the diamond to first baseman Will Craig.

But when Gonzalez’s throw went off line, Craig stepped in front of the base to catch it, and Baez, instead of continuing to run, stopped. He started retreating toward home, baiting Craig to follow him. Craig, who could have just touched first base and ended the inning, fell for it, nonchalantly chasing Baez.

Watching nearby, Baez signaled safe along with the home plate umpire, Ryan Additon, then quickly realized he needed to get to first base in order for Contreras’s efforts not to be in vain. (Runs in such situations don’t count if they come on a force out that ends a half-inning.) Luckily for the Cubs, and disgracefully for the Pirates, no one was covering first base.

Pirates second baseman Adam Frazier raced over too late. Perez tried getting the ball to Frazier while he was running, but the throw went behind him and into the outfield. Baez, who had safely slid head first into first base, popped back onto this feet upon seeing Perez’s throw go astray, then raced and slid safely into second.

(The official box score’s description had Baez reaching first on a fielder’s choice and second on a throwing error.)

“It’s easy to say from the outside that that’s the easy thing to do, but when you’re in the heat of it, he starts moving around, you don’t know what’s going on, it can speed up on you kind of quick,” Cubs pitcher Kyle Hendricks said of Craig’s not stepping on first base, before referring to Baez: “That’s just what he does by putting pressure on the other team.”

Baez ended up on scoring on a single by Ian Happ for a 3-0 Cubs lead. 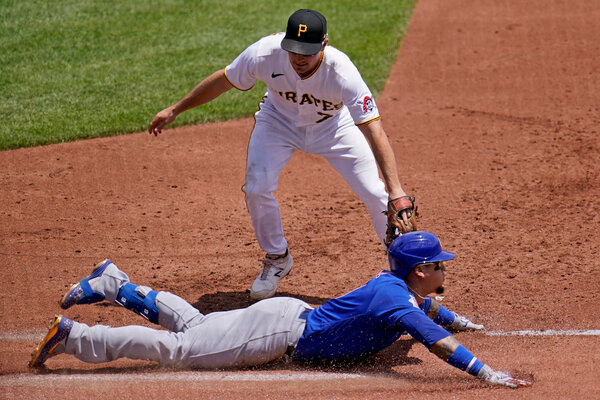 Having goaded an opponent into miscues, Baez grinned about the play after the game. “I never had that in my plans,” he said during a video call with reporters. He added later about all of his running, “I was just very tired.”

Watching from the dugout during the play, Cubs first baseman Anthony Rizzo laughed so hard while hanging over the railing that it appeared he might fall over it. Baez said his teammates celebrated as if he had smacked a double.

“The dugout was just losing it, the same reaction you guys probably had and everybody had,” Hendricks said. “Couldn’t believe what they just saw with their eyes.”

Ross said of Baez: “He has this way about him. You can call it swag or baseball I.Q. He plays the game like a kid. That’s why a lot of people fall in love with him.”

After the game, Pirates Manager Derek Shelton blamed himself for his team’s poor fundamental play and lack of understanding of the basic principles of the game.

“The bag hasn’t moved in 140 years,” he told reporters. “Our guys have got to know the rules. That’s my fault.”

Pirates pitcher Tyler Anderson said the entire team should be blamed, not just Craig, a rookie playing in his 15th major league game.

“There should have been eight of us on the field yelling, ‘Just go step on first,’” he said.