Home » Sport » Floyd Little, Star Running Back for Syracuse and Broncos, Dies at 78

Floyd Little, who followed Jim Brown and Ernie Davis in an extraordinary line of all-American running backs at Syracuse University, each wearing No. 44, and who donned it again when he forged a Hall of Fame career with the Denver Broncos, died on Friday at his home in Henderson, Nev., near Las Vegas. He was 78.

His death was confirmed by the Pro Football Hall of Fame. He received a diagnosis of cancer last year and had been in hospice care.

Little was only 5-foot-11 and 195 pounds, but he was strong enough to burst through defensive lines and agile in the open field, playing for the Broncos from 1967 to 1975.

Playing for Syracuse from 1964 to 1966, Little ran for 2,704 yards, had 46 touchdowns and was an outstanding kick returner. He was a three-time all-American and was elected to the College Football Hall of Fame in 1983. He was inducted into the Pro Football Hall of Fame in Canton, Ohio, in 2010 after he had already lost hope that he would be selected.

Little was chosen by the American Football League’s Broncos as the No. 6 pick of the pro football draft in 1967, three years before the N.F.L. absorbed the A.F.L. teams. The Broncos had never had a winning record since the A.F.L.’s 1960 inaugural season, but Little became known as “the franchise” for giving their fans some hope, though the team continued to struggle during his time in Denver. 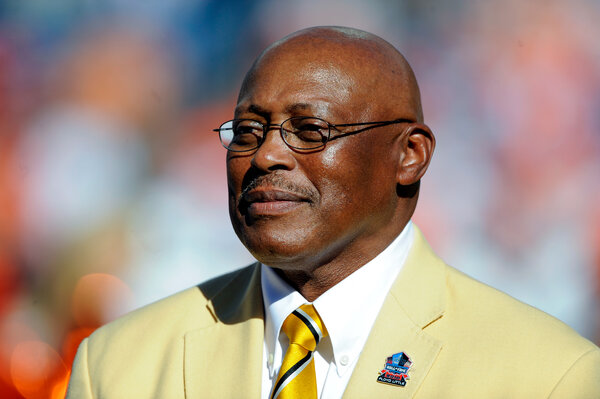 “I know when I got there the talk was about the team moving to Chicago or Birmingham,” Little told The Associated Press in 2009. “So I supposedly saved the franchise.”

“Floyd Little and I were students at Syracuse University together,” President-elect Joseph R. Biden Jr. said in a statement on Saturday. “I was in law school and he was a star halfback on the football team. I watched him play in Archbold Stadium, his No. 44 flashing by defenders who had no chance, running as if he was chasing the spirit of his dear friend and fellow 44 legend, Ernie Davis.”

“In the years that followed, I got to know Floyd as the man behind the number,” Mr. Biden said. “He was full of character, decency and integrity.”

Floyd Douglas Little was born on July 4, 1942, in Waterbury, Conn. His father, Frederick Douglas, named for the abolitionist Frederick Douglass, died of cancer when he was 6. His mother, Lula Douglas, worked several jobs to support Floyd and his five siblings. When he was in his early teens, the family moved to New Haven.

Little played football for Hillhouse High School in New Haven for two seasons, then for another two at Bordentown Military Institute in New Jersey, seeking to improve his grades so that he could be accepted to college. “The only thing I had was a dream,” the Broncos quoted Little as saying on a visit to New Haven in 1988. “I had no money, no promises and no guarantees.”

Little had considered applying to West Point, and Gen. Douglas MacArthur sought to recruit him while he was at Bordentown.

“General MacArthur shook my hand and talked to me about the value of education, about being a leader,” Little recalled in his memoir “Promises to Keep” (2012), written with Tom Mackie. “I was told that if I went to Army, I could become the first Black general.”

But in December 1962, while he was on winter break from Bordentown, Little was visited by Davis, who in 1961 had became the first African-American to win the Heisman Trophy as college football’s most outstanding player.

Little, who had close to 50 scholarship offers, told Davis he would go to Syracuse. But he still had thoughts of attending West Point. When he heard that Davis died of leukemia in May 1963 after being selected by the Cleveland Browns as the No. 1 pick in the 1962 N.F.L. draft, he decided to fulfill his promise to him.

Jim Brown, the first of three spectacular No. 44s at Syracuse, playing for the Orangemen from 1954 to 1956, became one of the greatest fullbacks in pro football history, playing for the Browns from 1957 to 1965.

Little obtained a master’s degree in legal administration from the University of Denver Sturm College of Law in 1975 and owned auto dealerships after retiring from football.

His survivors include his wife, DeBorah; his son, Marc; his daughters Christy and Kyra; and several grandchildren.

When Little was named as a special assistant to the athletic director at Syracuse in 2011, a post he held until 2016, he thought once more of Ernie Davis.

“Coming to Syracuse, I’ve tried to emulate what Ernie was and what he would be,” ESPN quoted him as saying. “My life has been tied to Ernie’s life because I wanted to be the Ernie Davis that he couldn’t be.”