PARIS — It was late in the summer of 2016, the Rio Olympics were over and Brazilian midfielder Formiga was ready to retire. This made sense, given that she was 38 years old, ancient by soccer standards, and that she had played in (among other things) six Women’s World Cups and six Olympic Games.

“I wanted to leave space for some new players,” Formiga said this spring in an interview at the training ground of Paris St.-Germain, the club she joined last year and for which she is captain.

But then Vadão, coach of the Brazil women’s national soccer team, asked her to reconsider, and Formiga thought some more about it. She thought about how she was still playing at peak performance, even after nearly 25 years in the game. She thought about the two-steps-forward-one-step-back state of women’s soccer, and the precarious state of women’s rights, in general, back home in Brazil.

And so she agreed to return one last time, for what is her seventh and (almost certainly) final World Cup. At 41, Formiga became the oldest woman to compete in the women’s tournament when she started Brazil’s opening match against Jamaica, and the second-oldest non-goalkeeper to play in either the men’s or women’s tournament. (Roger Milla, a forward, played for Cameroon in 1994, when he was 42. Several men’s goalkeepers have played into their 40s, as did the American defender Christie Rampone, who turned 40 at the 2015 Women’s World Cup.)

Formiga said her decision to return was motivated in large part by a desire to use her position to be an advocate for women’s soccer in Brazil: to campaign for money, for resources, for attention, for respect. 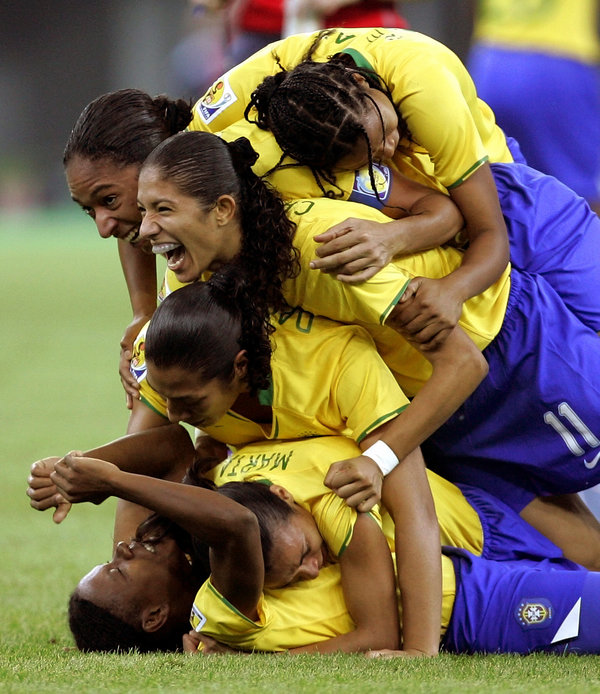 “I was frustrated,” she said. “I had fought so hard for recognition for women’s soccer, and I wanted conditions to get better for us women players, and it hadn’t happened.”

She continued: “Also, I didn’t want to imagine my national team reaching these games without me.”

Formiga is like a walking YouTube video of the history of Brazilian women’s soccer. She has played in every Women’s World Cup except the first, in 1991, making this her seventh — the most for anyone, man or woman, in the tournament’s history.

Her longevity is a testament to her remarkable drive and uncommon ability, but it also serves as an indictment of the development of women’s players in a country that, in a generation, has failed to produce a player capable of replacing her. And it says a lot about the narrow options for women who leave the game with neither the million-dollar bank accounts nor the front-office jobs and coaching and media roles routinely available to elite men’s players when they retire.

Formiga herself said as much after Brazil’s first World Cup match, a 3-0 win over Jamaica in Grenoble.

Women’s players in Brazil, she said, are not supported anywhere near as much as men, whose teams can inspire almost religious-like devotion. Little support leads to little in the way of player development.

“That makes it harder to renew the team,” Formiga said after Cristiane, 34, another veteran of the team, became the oldest player to score a World Cup hat trick.

“It’s a fact they need to attend to because I’m leaving, Cristiane too — and Marta will one of these days as well,” Formiga added. “We need to accelerate this process to have new girls, but the space for them doesn’t exist. If you look at Germany, the United States — they can change players because they’ve got strong leagues, so the coach doesn’t have too much difficulty finding a Marta or Cristiane. Brazil has this difficulty.”

On the day she agreed to meet with The New York Times in March, morning practice had just finished, and the P.S.G. players were moving in a noisy, formidable wave through the hallway of the sports center where they train. Formiga was among them, almost lost in the gaggle of women. At 5 feet 4 inches, she is shorter than most of her teammates, wiry and compact, with a grace and economy to her movement.

She also is 20 years older than some of them. Though she looks much younger than a person entering her fifth decade, Formiga is clearly from a different generation. She has a calmness, a maturity and a quiet focus that set her apart from the rest of the team, along with several decades of experience.

“We wear the same shirts, so I don’t need to be arrogant or feel that I’m above them,” she said. (She spoke in Portuguese, through an interpreter.) “But I know they are living through a process that I have already lived through. Sometimes I need to stop and listen to them, and sometimes they have to listen to me. Respect within the group is essential.”

Having never sustained a serious injury, Formiga does not feel particularly decrepit. It is true that being 41, however, is not the same as being 17, which is how old she was the first time she was chosen for Brazil’s Women’s World Cup squad.

“Of course there’s a difference,” she said of her fitness now versus her fitness then. “After a game, my recovery time is longer. Before it was like this” — she snapped her fingers — “and now it can take 40 to 70 hours” between matches to recover. “But at the same time, I do things to compensate.”

Her post-big-match regimen now includes stretching, ice baths, physiotherapy and special exercises devised by her trainer. She finds she becomes dehydrated more quickly than she used to and so has to pay attention to her fluid intake. Otherwise, she sticks to the same training schedule and (mostly the same) dietary plan as the rest of the team.

“The only difference sometimes is the food,” she said. “I like to eat rice and beans.”

In announcing his roster for the World Cup, Vadão praised Formiga’s “effort and dedication” and said he could not have imagined putting a team together without her intensity and work ethic.

“She is one of the biggest examples we have in the world,” he said at a news conference in Rio de Janeiro in May. “She’s not from this planet.”

Most Brazilian soccer nicknames are formed by taking the player’s original name and boiling it down to one elegantly forceful word. Neymar. Ronaldo. Marta, Formiga’s more famous teammate. Fred (the exception that proves the rule).

But Formiga got her nickname, which means “ant” in Portuguese, not because of what she was called at birth — Mirialdes Maciel Mota — but because of how she plays: tenaciously and unselfishly, as part of a squad whose whole is greater than the sum of its parts.

The name was awarded to her when she was a teenager and beginning to play competitively in Bahia, her home state, in northeastern Brazil. Her busyness and hustle reminded a fan of how an ant might behave in a group.

“In the beginning I didn’t like it very much,” she said of the name. “I thought it was weird. You know, like, ‘I don’t have antennae.’

“But the more I said I didn’t like it, the more people called me that, and I finally said, ‘I give up, call me Ant,’” she continued. “It turned out to be a perfect nickname because it’s so consistent with the way I play. And now nobody knows my name. Only my family calls me Mira, and the rest of the world calls me Formiga.”

Formiga has spent much of her life bucking expectations, starting with those that come when you are a girl in a family of boys growing up poor in Salvador, the capital of Bahia, where Formiga and her three brothers were raised. Their father died when Formiga was 8 months old, leaving their mother to look after all of them alone.

She started playing street soccer when she was 7 — with the local boys, since there wasn’t much in the way of girls’ soccer in 1980s Brazil. Her mother supported her, but her brothers were not at all pleased.

“I had a lot of issues at home,” she said. “My brothers didn’t want me to play. They were jealous. And so I thought: I really want to play.”

(“Now they are very proud to see their sister in this position, and are ashamed of having said all these things,” she added with a grin.)

She caught the eye of a visiting scout, and moved to São Paulo as a teenager to begin training full time. In 1995, Formiga was included on the Brazilian team for the Women’s World Cup in Sweden; at 17, she was the youngest player on the squad. The next year, she played for Brazil at the Summer Olympics in Atlanta, the first year women’s soccer was included in the Games.

Besides in Brazil, Formiga has played club soccer in leagues in Sweden, the United States and now in France. But she remains deeply committed to the country where her career began. She is fierce about the subject of women, and women’s sports, in Brazil.

It is a strange time to be a woman in Brazil, with last year’s election of a populist government. “Attention, attention! It’s a new era in Brazil: Boys wear blue and girls wear pink!” the new minister for women, family and human rights, Damares Alvarez, tweeted earlier this year. Formiga took that to mean, she said, that this government will be less inclined to support women’s efforts in traditionally male endeavors, like soccer.

Brazil and its soccer federation long have offered tepid support for the women’s program, even though Brazil is one of only seven countries to have qualified for every World Cup. The team’s successes have been hard-fought, Formiga said, its wins coming despite a lack of grass-roots resources and a desultory commitment to training and facilities for women in Brazil. In 2017, a group of her teammates — fed up with the country’s soccer leadership — quit the national team in protest. (Formiga signed the letter they made public, too.) Finding replacements for elite players, she said, continues to be a struggle.

“There are more teams in the women’s league, more championships and more women who want to play,” she said. “But the structures are too small. Girls need more chances, more training.”

When she retires, she said, she plans to return home and work as a coach, helping train the next generation of women. That move is at least a year away; last month, P.S.G. announced it would extend Formiga’s contract for another year, until June 2020.

“I know I alone cannot change the sport,” she said, “but if I can help the team, that’s what I want to do.”

Sarah Lyall is a writer at large, working for a variety of desks including Sports, Culture, Media and International. Previously she was a correspondent in the London bureau, and a reporter for the Culture and Metro Desks. @sarahlyall