Alex Graham has set the benchmark for a stacked final of the men's 200m freestyle at the world championship trials in Brisbane, qualifying quickest for Monday night's final ahead of Olympic 100m champion Kyle Chalmers.

Bond University swimmer Graham was already under the world championship qualifying time in his heat on Monday morning at the Chandler pool, clocking 1:46.14s to earn lane four ahead of Chalmers, who will be charging late after a 1:46.35s heat swim. 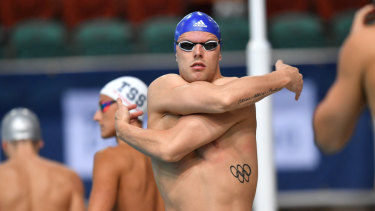 Clyde Lewis and Cameron McEvoy were next, with the latter stripping more than two seconds off his season best as he tries to earn a top-two spot or a slot in what looks to be a relay of huge potential one year out from the Tokyo Games.

Mack Horton has also qualified as he tries to find a way onto the team after missing the qualifying time for his pet event the 400m. He looked sharp enough in the heats but it will be the deepest race on the program and competition for spots is intense.

Chalmers said he felt a little clunky in the water but is a noted big-meet swimmer and will be intent on booking his ticket with a top-two finish on Monday night.

"I was a bit edgy, I hadn't tapered in a long time, even this morning I felt a little rough in the warm-up pool. But I think that is the fastest I have ever gone in the morning, I will take that," Chalmers said.

"It's good having those guys in the heats able to pull me through. If they weren't there I wouldn't have swum that fast, so I am happy with that."

Swimming Australia has put enormous work into relays and outside of the all-conquering women's 4 x 100m freestyle, the men's 4 x 200m has emerged as a genuine medal chance at next month's FINA World Championships in Korea and again in Tokyo next year.

Everyone wants in on the action and Chalmers is no exception.

"I honestly think it is our best event for the males. We have a lot of depth, a lot of guys who can go fast. It's an event I really want to be a part of because of the relay, I think we are a good shot of getting a medal.

"Individually we will see how we go. It's going to be tough getting a top two spot and the qualifying time is pretty quick." 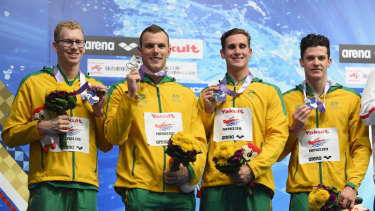 In other results on Monday morning, Minna Atherton and Emily Seebohm were the fastest through to the final of the women's 100m backstroke, while Mitch Larkin cemented his heavy favouritism in the men's version.

Jess Hansen and Georgia Bohl were the fastest through to the final of the women's 100m breaststroke but both will have to be significantly faster on Monday night to hit the qualifying mark.