Kim Ng brought hope to baseball when the Miami Marlins hired her as the team’s general manager in November, making her the first woman and second person of Asian descent to run a major-league team’s baseball operations.

In a sport dominated by men — specifically, at the top, by white men — Ng symbolized the potential for change. The civil unrest of last year was bringing a reckoning on diversity to many industries around the country, and it looked as if that reckoning would include baseball.

For the rest of Major League Baseball’s off-season, Ng has stood alone. Eight people have been promoted to or hired as the permanent president of baseball operations, chief baseball officer or general manager of a club — Sandy Alderson returned to the Mets, the Chicago Cubs elevated Jed Hoyer, Dave Dombrowski took over the Philadelphia Phillies. All but one of this off-season’s hires was a white man.

Taking it back another off-season, Ng is the only woman or person of color hired for 13 openings comparable to hers.

“It’s tough for a leopard to change its spots,” said Dave Stewart, a Black American who has done almost everything in baseball: a pitcher for 16 major-league seasons, a broadcaster, a pitching coach, a special assistant, an assistant general manager, a G.M. and, now, an agent.

“I’ve been singing this tune as a player since the mid ’80s,” Stewart added later in the phone interview. “And then when I became an executive and was bypassed for a job that I was more than qualified for when I was in Toronto, I said it once again publicly — that there was an issue with baseball and racism. Whether they say it’s racism or whether they say it’s prejudice, it’s still a problem.” 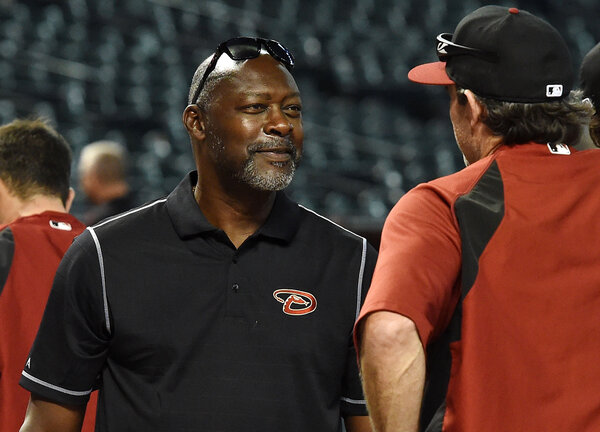 Like other people of color around baseball, Stewart wasn’t surprised by the top executive hires this off-season. Their frustration arises from the continued lack of opportunities, especially after corporations around the United States pledged to tackle racial inequality following George Floyd's killing while in Minneapolis police custody in May.

Only four heads of club baseball operations are identified as nonwhite by M.L.B.’s diversity goals — about 13 percent of M.L.B.’s 30 teams. They are Kenny Williams, who is Black, of the Chicago White Sox; Farhan Zaidi, who is of Asian descent, of the San Francisco Giants; Al Avila, who is Latino, of the Detroit Tigers; and Ng. That is a stark contrast to the demographics on the field, where 40 percent of major-league players are identified as nonwhite by M.L.B. — the majority of whom are Latino.

“It weighs on me and it’s something that I want to fix,” said Neil Leibman, who recently took over as the chairman of M.L.B.’s diversity, equity and inclusion committee, which is made up of team owners and league officials. Leibman, who is white, is the chairman of the Texas Rangers’ ownership committee and the club’s chief operating officer.

As M.L.B. Commissioner Rob Manfred has said and Leibman reiterated recently, clubs make their own choices on hires for president of baseball operations or general manager. While M.L.B. has resources, programs and a database of candidates aimed at helping improve its diversity, the only requirement governing top baseball positions is the Selig Rule.

First proposed by the former commissioner Bud Selig in 1999, the rule requires that clubs consider minority candidates for openings in five top baseball positions, including general manager and manager.

But in the two decades since the rule’s inception, owners have mostly hired top executives who look like them, and the number of nonwhite heads of baseball operations and field managers hasn’t changed much. (Entering the 2021 season, there will be only six managers of color — about 20 percent, which falls short of the makeup of the M.L.B. player pool and the country.) Throughout the years, several candidates of varied racial backgrounds — Ng included — have said they felt as if their job interviews took place simply so teams could check a box.

“This story — or fairy tale or whatever you want to call it — you’re selling to make minorities think that you actually have a chance, we have to still aspire to get that job, but for decades now — for decades now — it’s just not happening,” said Stewart, who also pointed to the lack of diversity among owners as a contributing factor. Arte Moreno, a Latino, is the only nonwhite majority team owner in M.L.B.

Among the ideas to help correct the imbalance in front offices is updating the Selig Rule. Michele Meyer-Shipp — who was hired by Manfred last summer to serve as M.L.B.’s chief people and culture officer — and Leibman both said in interviews that they were reviewing the rule with Manfred’s blessing. Each said they were looking at what other leagues have done, and will make a recommendation to Manfred. “We’re not only going to look at it to expand it, we’re going to look at it to put more teeth into it,” said Leibman, who as chairman has increased the frequency of the diversity committee’s meetings.

Meyer-Shipp and Leibman declined to discuss specific changes because they said the process was continuing. Meyer-Shipp said that she has been studying the practices of M.L.B. and its teams since she started in October, and that diverse hiring policies like these can carry not just penalties but rewards. Leibman said perhaps the mandate could be broadened across clubs, beyond a handful of top front office roles, and into Minor League Baseball, which will soon be run by M.L.B. after years of independent operation.

In the N.F.L., where there is a larger disparity between the demographics on and off the field, league officials updated their version of the Selig Rule, the Rooney Rule, last year, increasing the requirement that teams interview at least one outside nonwhite candidate to at least two for head coaching vacancies. Recently, it added draft pick compensation for teams that lose nonwhite staff members to head coaching or top positions elsewhere. Leibman and Meyer-Shipp said they hoped Meyer-Shipp’s long résumé outside baseball — she was hired away from the accounting giant KPMG — would bring a fresh set of ideas to a longstanding issue.

Meyer-Shipp and Leibman also pointed to improving the pathways for team officials long excluded from leadership roles well before they hold a leading baseball operations title. Meyer-Shipp said she was studying the career paths of general managers and looking for ways to assist candidates who can diversify the game. She also said she hoped to add to M.L.B.’s existing programs to help remove the barriers of entry into the sport. Baseball can be an expensive sport for families, and many team officials first broke into the industry working for little money, or none at all.

Leibman — whose team hired Chris Young, who is white, a former Rangers pitcher and top M.L.B. executive, as a first-time G.M. in December — said baseball needs to do more to build a more diverse talent pool from the very bottom (such as more urban youth academies). He suggested that would lead to more players of color (only 8 percent of current major league players are Black), and then more coaches and then more executives.

“The commissioner’s charge to me is we have to focus first on — and I totally agree and endorse this approach — getting diversity on the field,” Leibman said. “And with diversity on the field, we will get more people watching baseball. If you’re not watching baseball, and they don’t like baseball and they’re not playing it, then they’re not going to be interested in applying for a job in M.L.B. They’re going to be more interested in applying for a job at the N.B.A. or N.F.L. or some other company.”

There are already promising candidates who haven’t gotten a chance to run a team. Two Black assistant general managers — Kevan Graves with the Pittsburgh Pirates and Billy Owens with the Oakland Athletics — have interviewed for multiple G.M. openings. Eddie Romero of the Boston Red Sox, Rene Francisco of the Kansas City Royals and Moises Rodriguez of the St. Louis Cardinals are notable Latino assistant general managers. More women are entering coaching staffs and front offices.

Stewart, meanwhile, said he has continued to watch candidates with lesser or no front office experience get jobs. He has not been interviewed for a G.M. vacancy since he was fired in 2016 after two years as the Arizona Diamondbacks G.M. (Arizona went 148-176 while he ran the team.) He was puzzled as to why Ng’s predecessor, Michael Hill, who is Black and was the Marlins’ president or general manager for 12 years, was not leading a team again.

After all, this was the same industry, Stewart said, in which Ng wasn’t given the reins of a team until she had spent three decades working as an executive with M.L.B., the Los Angeles Dodgers, the White Sox and the Yankees. She had more experience, he said, than other general managers who have “been fired and rehired and fired and rehired again.”

Teachers at no more risk of Covid than any other job, new data reveals