ARSENAL'S Europa League humiliation continues to worsen as the 4-1 loss to Chelsea has caused them to slip further behind their closest rivals in the money league.

The skint Gunners will have just £40million to spend this summer after missing out on the prize money in Baku and a return to the Champions League. 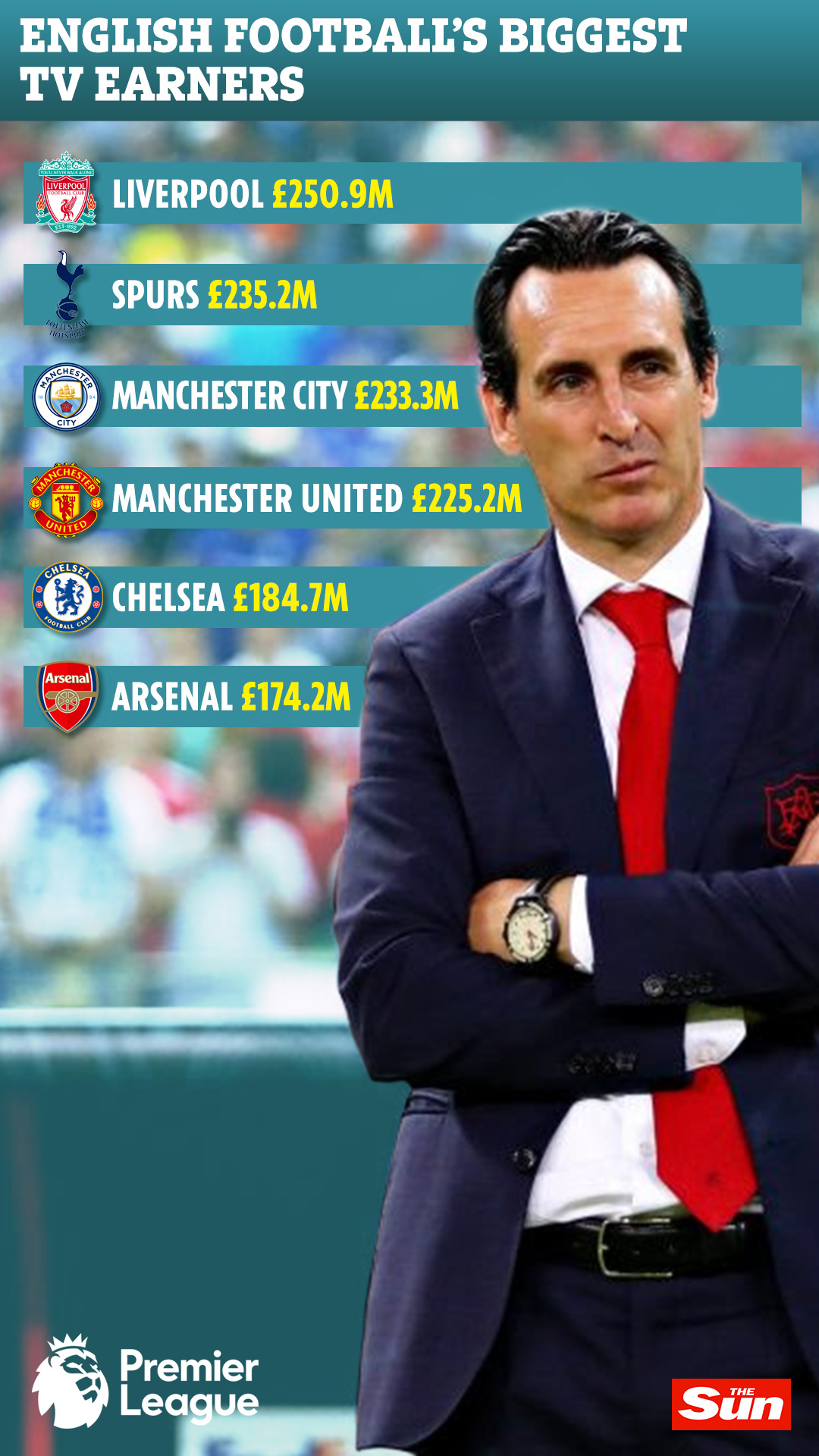 Meanwhile, Liverpool added the cash kings title to their European crown as the rewards of their win in the Madrid showpiece event were unveiled.

While the Anfield outfit were English football’s biggest TV earners this season, they were followed by Madrid victims Spurs, who bagged a club record sum from the Prem and their Euro exploits.

And the figures, calculated by football finance expert Swiss Ramble, demonstrated just how much Chelsea stand to gain from their third-place finish under outgoing Mauricio Sarri – and the price that will be paid by Arsenal and Manchester United next term.

When that is added to their Premier League earnings of £152.4m from a campaign in which they were edged out by Manchester City, the Merseysiders banked a staggering £250.9m – the first time any side has earned more than a quarter of a billion pounds from TV money alone in a single season.

The income over the past two seasons, plus the guarantee of cash next term, should mean Mauricio Pochettino has a far bigger transfer budget than Spurs have consistently been able to make available, despite the estimated £25m annual debt repayments due on their £1bn new home in N17.

But that was where the good news stopped for United, and began for Chelsea, whose Europa League Final triumph boosted their total to £184.7.

That, while enough to finish fifth in the charts, was almost £15m less than they had banked from a season which included a run to the last 16 of the Champions League in 2018.

And with Uefa’s new “historical” co-efficient meaning Chelsea, ranked fifth in that list, will earn almost £50m without kicking a ball, it is United who will be the biggest losers.

The Old Trafford side cannot expect to bank more than £40m even if they were to win every Europa League game up to the final in Gdansk.

Yet all four English sides in the main competition will bank more than that just by being in the group stages.

Arsenal, who needed to beat Chelsea in Baku to end their exile from Europe’s elite, have felt the pinch over the past two seasons.

The Gunners ended up making £174.2m from their combined domestic and Europe exploits.

But the gap between them and Spurs rose from £23.3m last year to £61m this season, with Tottenham able to press the accelerator again next term after their fourth-placed finish.

The income meant Arsenal earned £76.7m less than Liverpool, a huge divide between two teams that were only three places apart in the Prem table.

Yet while the numbers do not look pretty for United and Arsenal, they spell potential good news for Wolves, who have the chance to leapfrog the rest of the chasing pack financially.

Everton, seventh in the money league and with no European football, banked £128.6m.

Wolves, who were just £1.4m behind, can now expect to pick up £18m or more if they can get through the qualification and group stages of the Europa League.