Maskless swimmers on the Tokyo medal dais, including Australia’s first gold medal winners at the games, have prompted the International Olympic Committee to make a tweak to the rules on face coverings.

Athletes can now take their masks off for 30 seconds while on the podium to pose for photographs, according to an AOC statement. 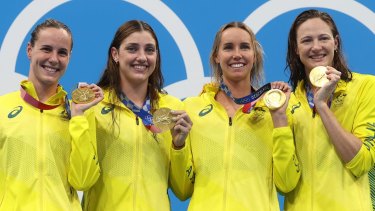 “Then masks go back on,” the statement clarified. “Our athletes were simply following the direction of the official at the podium, who holds up a sign saying ‘masks off’ briefly for the photographs. That’s what our girls did.

“IOC has confirmed this and there’s nothing wrong with athletes doing this. They are following the policy. This will be communicated to media and via the IOC website this afternoon.”

The AOC statement was referring to the victorious Australian 4×100 women’s freestyle relay team, who took their masks off briefly on the podium.

The winning Australian relay team followed American Chase Kalisz taking off his mask on the podium to pose for a photo with his gold medal after his 400m individual medley win.

The clarification came hours after an IOC spokesman admonished swimmers for removing their masks on the podium.

“It’s not a nice to have. It’s a must to have,” said IOC spokesman Mark Adams, responding to questions about several maskless swimmers.

“There is no relaxation and we would urge and ask everyone to obey the rules,” he added.

“It’s important for the sports, for everyone involved and for our Japanese friends, and it would send a strong message.

“We understand … there’s a lot of excitement and of course when you win a medal, we feel for the athletes.

On Sunday, Tokyo organisers reported 10 new Olympics-related cases of coronavirus, bringing the total to 132. Some 15 of that total have been positives within the village. Sunday’s numbers are made up of two unnamed athletes, six games-concerned personnel, one member of the media, and one contractor.

There are strict rules being imposed at the Tokyo Games because of the pandemic situation Japan finds itself in. Measures include no crowds at events (except for media, officials, support staff and other athletes) and regular testing for participants.

Never miss a medal or great sporting moment with our Olympic update emailed daily. Sign up for our Sport newsletter here.