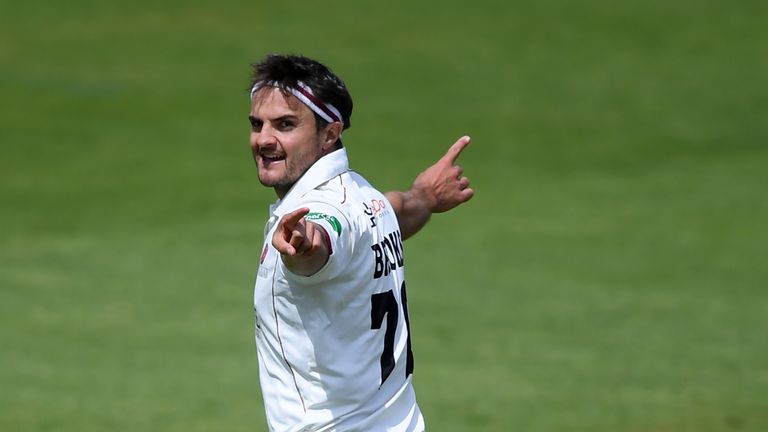 Jack Brooks’ five-wicket haul moved Somerset to the top of the County Championship Division One table with a stunning 102-run victory over defending champions Surrey.

Having removed Mark Stoneman and Rory Burns on the third evening, the seamer took three scalps in seven balls to complete figures of 5-33 and leave the hosts 120-5 in pursuit of 267.

Tim Groenewald then claimed three wickets and Craig Overton two to dismiss Surrey, who are yet to win this season, for 164 at Guildford.

Nottinghamshire held on for a draw with Warwickshire at Edgbaston, despite the best efforts of veteran spinner Jeetan Patel.

A last-wicket stand of 86 between Peter Siddle and Sam Cook ensured Essex drew with Yorkshire at Headingley.

The hosts still harboured hopes of victory at the start of day four, with the visitors resuming on 252-9 in reply to 390.

Yorkshire lost Will Fraine early before half-centuries from Adam Lyth and the prolific Gary Ballance moved their side to 107-1 at tea when rain arrived and the captains shook hands.

Lancashire moved to the top of Division Two despite failing to beat stubborn Leicestershire at Liverpool.

Resuming on 5-1 in their follow-on, Leicestershire batted 98 overs for 151-5 with Paul Horton top-scoring with 49.

Opener Alex Lees carried his bat for 107 lift Durham to a second-innings 242, setting the visitors 268 to win.