Justin Bieber started a whirlwind of confusion on Sunday night when he tweeted out his desire to fight Tom Cruise in the UFC octagon.

“I wanna challenge Tom Cruise to a fight in the octagon,” Bieber wrote. “Tom if you dont take this fight your scared and you will never live it down.”

Bieber then tagged UFC president Dana White, asking if he’d be willing to put on the fight. 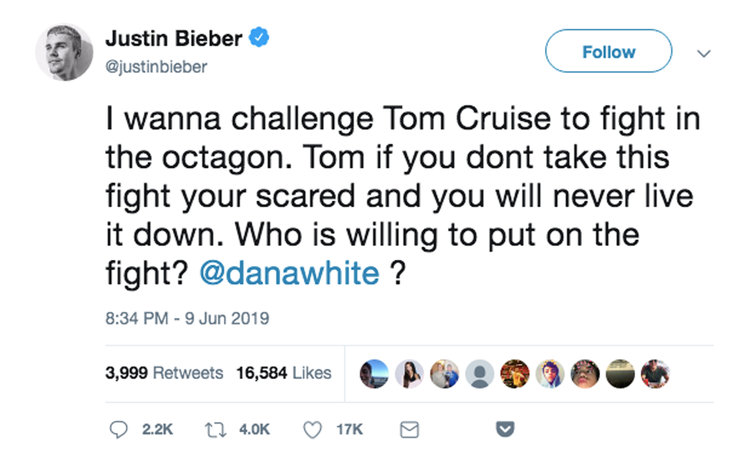 On Twitter, fans didn’t know what to make of Bieber’s challenge.

Some thought his account got hacked, others thought he was just having a laugh, and more still simply wanted to correct Bieber’s grammar.

But many seemed to agree that Cruise, who is 31 years Bieber’s senior, was an odd man to challenge with such vigor.

While fans were clearly confused by Bieber’s bizarre proposal, Conor McGregor was quick to volunteer his services to jump onto the celebrity fight card, saying that he’d challenge Mark Wahlberg to a bout on the same night.

McGregor has pitched the idea of fighting Wahlberg in the past, saying he’d like to take on both him and Conan O’Brien for their shares in the UFC.

Read more:Conor McGregor wants to fight Conan O’Brien and Mark Wahlberg on the same night after O’Brien jokingly offered his shares of UFC as a prize

Obviously, this fight card is a pipe dream, and will almost certainly not come to fruition. Nobody can know how serious — if at all — Bieber was with his initial proposal or Cruise’s feelings on the matter.

Of course, most thought Floyd Mayweather would never fight Conor McGregor until it did — and we all shelled out nearly $100 for that pay-per-view.