Home » Kyle Pitts Is Set to Be the N.F.L.’s Next Revelation at Tight End

In the first quarter of a game against Kentucky last November, the University of Florida coaching staff called a favorite play for a favorite player.

Kyle Pitts, the bruising and balletic tight end forecast to be among the earliest selections in N.F.L. draft this week, had returned to the field that day, three weeks after being concussed on an illegal hit in a game against Georgia. The Gators’ first drive of the Kentucky game had just begun gathering momentum, nudging to Florida’s 35-yard line, when Coach Dan Mullen dialed up a “snake” pattern — a route traditionally assigned to slight, fast-twitch receivers, not to players who check in at 6 foot 6 and 245 pounds, as Pitts does.

Pitts came off the left end of the line at full speed, tilted his shoulders toward the sideline and — so quickly that video of the play seems to skip a frame — veered back inside, leaving the cornerback who covered Pitts whirling his hips and grabbing at air. Quarterback Kyle Trask hit Pitts in stride, and he did the rest, opening up to a gliding sprint. The play went for a 65-yard touchdown, the first of three for Pitts that day.

“The kid freakin’ ripped it,” Brewster said. “I mean, it was absolutely gorgeous.”

Pitts’s game, a blend of rare physicality and even rarer grace, tends to inspire such double-barreled language. He is poised to join the ranks of the N.F.L.’s top-shelf tight ends, players like Rob Gronkowski, George Kittle and Travis Kelce, who have given recent Super Bowl contenders offensive options that are nearly impossible to cover.

Pitts and those other big-bodied pass catchers epitomize what N.F.L. teams seek in “unicorns” — parlance borrowed from a similar positional evolution in the N.B.A. These players not only excel at a given job description but also pair attributes long considered disparate. Pitts gets open like a small man and brings the ball down like a big one, high-jumping along the sideline or shoving through pairs of defenders to wrangle passes. He makes possible a new version of the sport.

“It really is mismatches,” Mike Renner, a draft analyst for Pro Football Focus, said of modern offensive philosophy. “Offensive coordinators are realizing it’s not necessarily their scheme; it’s about getting the right guy on the right defender. You’re seeing more and more of that — those guys that have multiple skill sets are the ones that are more coveted.”

Running backs who might once have been considered too small to carry the every-down load, such as the New Orleans Saints’ Alvin Kamara, have stepped to the position’s vanguard, catching passes almost as often as they take handoffs. Receivers who don’t fit the traditional profile — the Seattle Seahawks’ D.K. Metcalf was once thought to be too bulky to run effective routes — have become game breakers.

Nowhere has the shift been more pronounced than at the tight end position, once the province of dutiful blockers and complementary receiving targets. Kittle is the muscle of the San Francisco 49ers’ ground game, cracking into linebackers to clear space for outside runs, and the focal point of its aerial attack, amassing a team-high 1,053 yards during the 2019 season, which ended with the 49ers in the Super Bowl.

Kansas City’s Kelce is a less renowned blocker but a bigger vertical threat; until late in the 2020 season, he led all N.F.L. players, not just tight ends, in total receiving yards. In trying to re-establish their championship bona fides, the New England Patriots added a pair of tight ends this off-season, Jonnu Smith and Hunter Henry, giving the team a chance to recreate the offensive confusion that made the pairing of Gronkowski and Aaron Hernandez so successful in the early 2010s.

To defend against such threats, “what you need is for someone like me to go play linebacker,” said Tony Gonzalez, the Hall of Fame tight end who in the 1990s and 2000s prefigured this age of rangy receiving threats. “But we don’t want to play linebacker; we want to score touchdowns.”

At Florida’s pro-day workout for N.F.L. scouts in March, Pitts flashed the attributes that make him what Renner terms “a true modern tight end weapon,” registering a wingspan of nearly 7 feet and a 33½-inch vertical leap and running his 40-yard dash in 4.44 seconds — faster than some All-Pro wide receivers.

Shortly thereafter, Pitts laid out professional aspirations that extend beyond going in the top five of this year’s draft, as many analysts predict he will: “Start at a high level and keep increasing every year and being able to do other things that other tight ends aren’t doing,” Pitts said. “I feel like I’ll be the best to ever do it.”

When Pitts arrived in Gainesville in 2018 as a 17-year-old freshman, the challenge for Florida coaches lay in convincing him of all that his body could do. “It was just a learning process of him understanding how to play in his frame,” said Larry Scott, Pitts’s tight end coach for his first two years with the Gators and now the head coach at Howard University. Scott marveled at Pitts’s catch radius — his ability to adjust to passes close to his shoe tops or high above his helmet — and taught him when to outrun defenders and when to invite contact and create leverage.

Pitts caught just three passes his freshman season, but he built a habit of studying the N.F.L. players who will soon become his peers. He watched film of Kittle and of Las Vegas Raiders tight end Darren Waller, eyeing nuances of footwork and positioning. He drilled line-of-scrimmage releases and blocking technique incessantly. 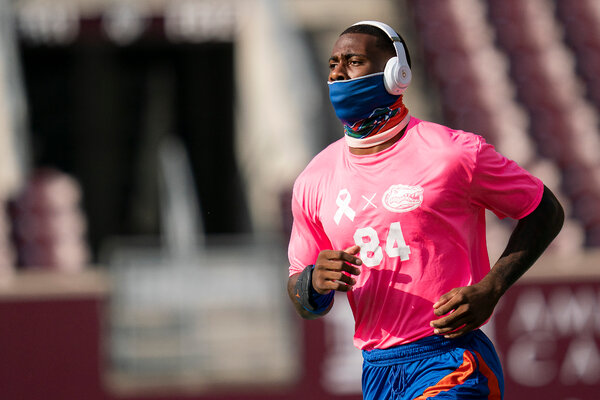 At Archbishop Wood High School outside Philadelphia, Pitts had played defense as well as tight end and receiver, once registering a pair of interceptions in a state championship game, and he grew adept at reading complex coverages and knowing how to settle into open zones.

The practice-field and film-room work helped Pitts produce the finest season by a tight end in recent college football history in 2020. Lining up wherever he was needed in Florida’s formations, Pitts caught 43 passes for 770 yards and a dozen touchdowns — despite missing the better part of three regular-season games because of the concussion and a fourth with an unrelated injury, and also sitting out the Gators’ Cotton Bowl game to prepare for the draft.

His 17.9 yards per reception eclipsed the 15.9-yard average of DeVonta Smith, the Alabama receiver who won the 2020 Heisman Trophy; Pitts finished 10th in the voting, higher than any other tight end in more than four decades.

Even top draft prospects tend to get typecast, as talent evaluators look for skills that can reliably transfer to the next level. Coaches talk about Pitts, though, in the language not of production but of possibility.

After Pitts’s pro-day workout, Mullen described a straightforward on-field calculus: If Pitts has a corner on him, he will come inside and play through contact. If he is matched up with a linebacker, he will flex out and win with speed and route running. “What are you going to do at that point?” Mullen asked.

Unlike his predecessors, Pitts won’t take the league by surprise. In 2013, the Chiefs nabbed Kelce in the third round of the draft after he amassed fewer than 900 receiving yards over three seasons at the University of Cincinnati. Coming out of Iowa with just 22 catches his senior year, Kittle was not picked until the fifth round in 2017. But college offenses have become more elaborate in recent years to showcase talent like Pitts’s, on the rare occasions it comes along.

In the draft, N.F.L. teams divulge the skills they most value; one can trace the trends of the game in the ever-increasing glut of quarterbacks taken at the top of the first round and in the falling out of favor by running backs. If Pitts is the highest non-passer selected, he could be the first tight end chosen in the top five since Riley Odoms in 1972. (Atlanta, holding the fourth pick, may look to Pitts to replicate, and expand, Gonzalez’s role there.)

Asked what Pitts might become in his N.F.L. prime, Brewster thought back to the game against Georgia, which was ranked fifth in the country at the time. Before getting hurt, Pitts was the locus of the action, throwing blocks at the burly Bulldogs front and catching two passes for 59 yards. The first was a vaulting, pirouetting snag over the sideline, the second a sheer outmuscling of his defender in the end zone. He did enough, over a quarter and a half of play, to dig No. 8 Florida out of an early two-score hole; the Gators would go on to an upset win, 44-28.

“He was on a whole ’nother level,” Brewster said. “There was everybody on the field — you had Florida and you had Georgia. And above the field, you had Kyle Pitts.”