JAMIE CARRAGHER left fans in stitches when playing on his phone as a television broadcast began – a gaffe he blamed on a hangover.

Ahead of Liverpool's Champions League final against Tottenham Hotspur, the ex-centre-back was evidently unprepared to give his take on proceedings in Madrid. 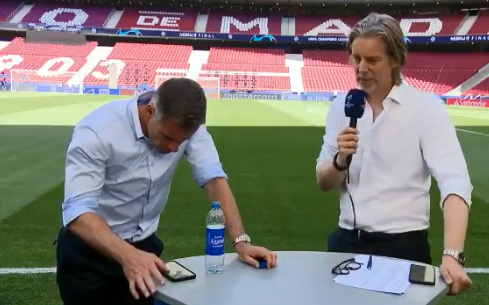 Looking down at his phone as the Viasport Football broadcast commenced, he quickly realised and asked if he was on air.

"We're on air, but that's ok," host Jan Aage Fjortoft calmly told Carragher as he removed his mess from the desk.

The host joked about the water bottle being hastily removed: "You're thirsty…"

"Okay hungover, were you out last night?" asked Fjortoft.

"No!" Carragher replied with more than a tinge of sarcasm.

Fans watching the clip on Twitter joked that Carragher's slack attitude was a result of Gary Neville not being alongside the 41-year-old to keep him in check.

Twitter user Gaz joked: "No Gary Neville to keep him on his toes."

Others enjoyed the laid back approach in the often stern and serious world of football analysis.