Hugill is with United's first team at a training camp in Surrey, having come on as a sub against Derby and QPR last season. 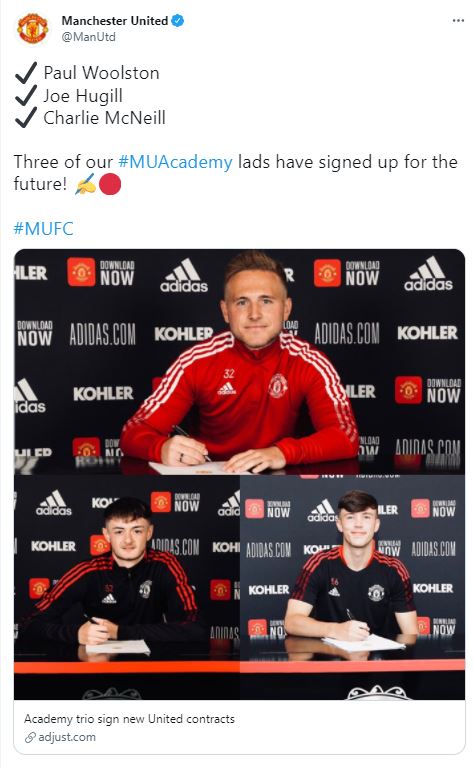 And back in February Old Trafford boss Ole Gunnar Solskjaer claimed the 17-year-old outshone new buy Amad Diallo when he hit four goals during a 6-2 Under-23s win over Liverpool.

Comparing the two, Solskjaer said: "If we go from that game, I’d pick Joe Hugill.

"Amad gets a good start and why Joe didn’t take the penalty himself to get five goals I’m going to ask him."

McNeil, 17, and 22-year-old Woolston are currently with the Academy in Edinburgh as they build up to the new season.

United said on their website: "All three players will be looking to hone their talents behind the scenes and maintain their development at the club in the coming months and years."

Local lad McNeill was top scorer in the Under-18 Premier League last term, with 25 goals in 29 games.

But it might be a make-or-break season for ex-England youth star Woolston.

United beat Cardiff to his signature when Newcastle surprisingly released him three years ago.

But the Sunderland fan has still not played league football.

He had loan spells with North East non-league clubs Darlington, Blyth Spartans and South Shields before leaving the Toon.

But in announcing the three new contracts, United stated: "Woolston will continue to be a great influence on his team-mates both on and off the pitch.

"He played nine times for the Under-23s during the 2020/21 season and will once again be a pivotal part of the Academy’s goalkeeper group."