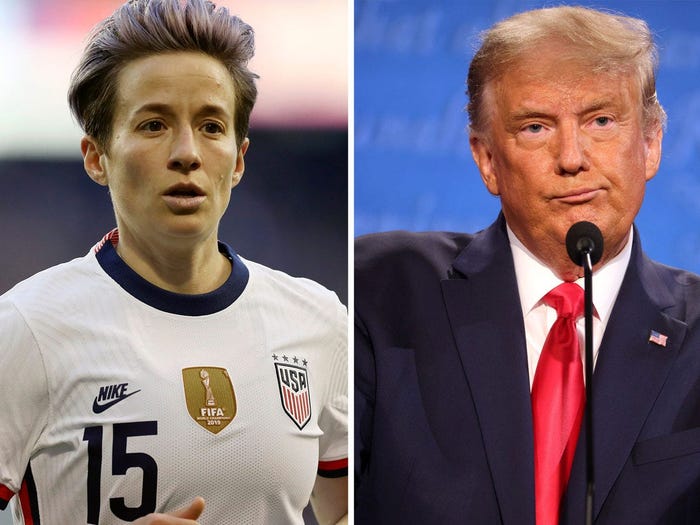 During the tournament, Rapinoe — an out lesbian and an outspoken progressive — famously drew the ire of President Donald Trump by declaring that she was not "going to the f—— White House" if the USWNT won it all. After Trump responded by suggesting that Rapinoe should "win before she talks," the prolific scorer responded by earning Golden Ball and Golden Boot honors for her outstanding efforts in securing the US Women's National Team's fourth World Cup victory.

Once the then-34-year-old returned stateside, every media outlet in the country wanted to score an interview — even Fox News.

In her new memoir, Rapinoe says the right-wing news outlet approached her father, Jim, for his own interview. After voting for Trump in the 2016 presidential election, he was tempted to appear on air with the network.

"Dad!" Rapinoe recalled yelling into the phone. "You can't let Fox News into the house, they're doing takedowns of your daughter!"

"Stick to local news!" she added.

He didn't ultimately take the interview, "although, god knows, Fox tried." But the potential airtime on Rupert Murdoch's platform wasn't the only source of political conflict with her father Rapinoe recalled in "One Life."

When she and her twin sister, Rachael, learned that their father had voted for Trump, they gave him the silent treatment for more than a month. Once they were home for the holidays that year, they "let him have it," Rapinoe wrote.

"'How could you?!'" she recalled yelling with Rachael, who is also a lesbian. "'How could you vote for that heathen when you have gay daughters?!'"

"'Trump doesn't f—— care about you!' we yelled. 'You're so worried about Democrats and socialism. You could use some f—— socialism!'" she added.

When the Rapinoe twins began to question why Trump's racism, sexism, homophobia, and history of bragging about sexual assault weren't enough to deter their father, Jim would respond with various talking points about social security, Obamacare, and trade deals — "all opinions that came from Fox News," Rapinoe wrote.

"'I don't trust the other news networks,'" Jim would say, per Rapinoe.

Although the ultra-liberal Ballon d'Or winner writes that she wouldn't "give my dad a free pass for any of this," she acknowledges that it's "useful to understand where he comes from."

"He's from a conservative white town that's been hit hard not only by recession, but also by businesses taking their operations overseas," she wrote. "And his views were echoed by a lot of people he knew."

"I love my dad and admire so many wonderful things about him — his kindness, his decency, his generosity, his work ethic," Rapinoe added. "But when it comes to Trump, I can't bite my tongue."

"One Life" dropped Tuesday and is available for purchase through most major booksellers, including Amazon and Barnes & Noble.