For almost three months since he bought the Mets, Steve Cohen engaged in surprisingly lively banter with the team’s fans on Twitter, entertaining their outlandish trade suggestions and showcasing a sense of humor and genuine interest in their thoughts that was rare for a billionaire team owner.

That all came to a crashing halt Friday night, when Cohen deactivated his Twitter account and released a statement through the Mets in which he said his family had received unspecified threats on the social media service. The move came a day after Cohen’s hedge fund — and Cohen himself, though his Twitter account — had been swept into the venomous rich-vs.-poor battle over the struggling video-game retailer GameStop.

“I’ve really enjoyed the back and forth with Mets fans on Twitter which was unfortunately overtaken this week by misinformation unrelated to the Mets that led to our family getting personal threats,” Cohen said in a statement. “So I’m going to take a break for now.”

Well, this was a predictable and fitting end to Steve Cohen's Twitter experience. pic.twitter.com/R5hU8V31Ha

The misinformation and personal threats appeared to be related not to Cohen’s ownership of the Mets or his online banter about the team, but to his connections to the frothy trading in GameStop stock.

Earlier this week, an unknown but sizable number of small investors, whipped into a frenzy on places like Reddit’s WallStreetBets forum, drove up the stock price of the struggling video game retailer GameStop in part, in an effort to punish deep-pocketed investors who had bet heavily that its value would fall.

The surge of small investors quickly sent GameStop’s stock price from less than $20 a share to about $325 a share as of Friday. For hedge funds that had taken positions against GameStop, expecting that the value of the shares would fall (in what is known as shorting the stock), the stock’s sudden rise cost them billions.

One of the biggest losers may have been Cohen.

Cohen’s hedge fund, Point72, had invested nearly a billion dollars in Melvin Capital, another hedge fund led by a former Point72 employee. Melvin Capital had shorted GameStop stock, and so as its value rose Melvin Capital sustained losses so large that it required a $2.75 billion rescue from other investors, including another $750 million from Point72.

Point72 has lost 15 percent of its value this year, The New York Times has reported.

All of this led to some Twitter users to question if Cohen was really their deep-pocketed savior, or whether his hedge fund’s losses would reduce his willingness to spend on the team.

“Why would one have anything to do with the other,” he replied to one Mets fan, a departure from the everyman persona that had been his account’s hallmark. For months, Cohen had engaged with Mets fans, fielding trade proposals, answering questions and making jokes. 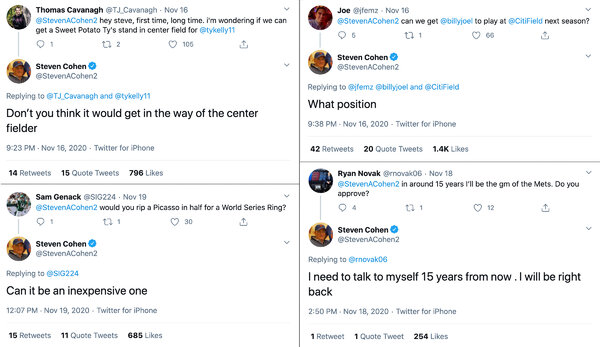 But on Thursday, Cohen got into a Twitter back-and-forth with Dave Portnoy, the acerbic founder of the sports and culture website Barstool Sports, which has a long history of racist and misogynistic behavior. Portnoy, who in recent months has styled himself as a day trader, accused Cohen of being involved in stock trading apps like Robinhood, which had been restricting users from buying GameStop stock. Portnoy, without evidence, labeled such conduct “criminal.”

“I had zero to do with what happened today…chile out,” Cohen replied in one Tweet, seeming to misspell the word chill.

But fans of Barstool Sports are notorious for going after critics, especially those who draw the ire of Portnoy, on social media. In a separate incident this week, the National Women’s Hockey League released a statement rebuking Barstool and its chief executive after she released a video that had subjected reporters who cover the N.W.H.L. and league employees to online harassment.

After his brief exchange with Portnoy, Cohen came under the same kind of fire. In response, he simply shut down his account.