PHILADELPHIA — Michael Conforto hit a tiebreaking homer leading off the ninth inning and the Mets benefited from a very questionable call by the second base umpire Saturday night in a 5-4 victory over the Philadelphia Phillies.

Conforto also had a two-run double in a four-run first inning against former teammate Zack Wheeler. The Mets squandered the 4-0 lead but recovered to win for just the fourth time in 12 games — even after center fielder Brandon Nimmo and third baseman J.D. Davis exited with hand injuries.

Alec Bohm hit a two-run homer for the Phillies, who have alternated wins and losses in their last 10 games. Philadelphia hasn’t won consecutive games since a three-game sweep of Atlanta to open the season.

With one out in the bottom of the seventh inning, second base umpire Jose Navas ruled Andrew McCutchen ran out of the baseline to avoid an attempted tag by shortstop Francisco Lindor on what became an inning-ending double play. Replays showed McCutchen ran in a straight line from first to second.

Phillies slugger Bryce Harper, sitting out after getting hit in the face by a pitch recently, was ejected for arguing from the top step of the dugout.

Philadelphia pitchers had retired 14 consecutive batters before Conforto drove an 82 mile-per-hour sinker from Hector Neris (1-3) over the wall in right-center.

Trevor May (2-1) pitched a scoreless eighth and Edwin Diaz struck out two in a perfect ninth for his third save. Mets relievers have thrown 19 straight scoreless innings.

A day after things got heated in the eighth inning and the benches cleared, Wheeler plunked Lindor with a breaking ball in the first. Lindor ran to first base without incident, and no warnings were issued by the umpires.

The scene was a far cry from Friday night when Jose Alvarado struck out Dominic Smith, then celebrated and shouted in Smith’s direction. There was history between the two stemming from April 13 when Smith objected to Alvarado throwing near Conforto’s head and then hitting him. Tempers flared and Alvarado threw his glove to the ground, but both players were restrained and no punches were thrown.

Smith singled in the Mets’ four-run first, which ended with a double-play groundout by James McCann. Smith slid into second trying to break up the double play, but he and Phillies shortstop Didi Gregorius embraced after they became untangled.

Conforto’s two-run double in the first helped the Mets to a rare offensive outburst. The Mets entered last in the majors in runs, hits, homers and R.B.I. and had scored a total of just 13 runs in its last eight losses.

Wheeler blanked the Mets from that point, exiting after allowing four runs on seven hits with six strikeouts and a walk in seven innings.

The Phillies got two runs back in the second on Andrew Knapp’s groundout and Wheeler’s R.B.I. single to right. They tied it in the sixth on Bohm’s opposite-field, two-run homer to right.

It was the first homer allowed this season through 26⅓ innings by Mets starter Taijuan Walker, who gave up four runs on seven hits in six innings with four strikeouts and a walk.

Taillon Gets First Win Since 2019 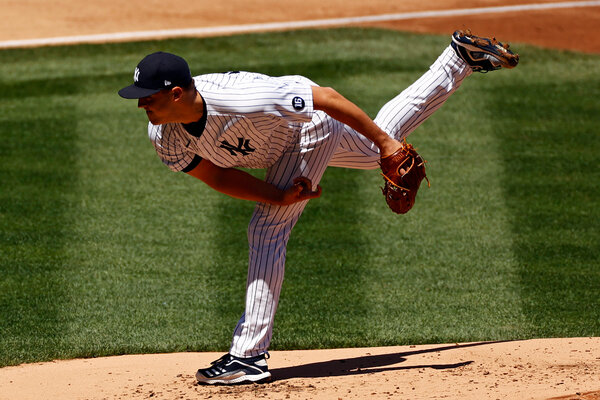 Gleyber Torres also drove in three runs as the Yankees won for the sixth time in seven games and improved to 13-14.

In a big league season when hitting is in short supply, 11 of the 18 batters in the starting lineups for the Tigers and Yankees finished the game hitting .198 or below. Former Triple Crown winner Miguel Cabrera went 0 for 5 and fell to .125, one of the five struggling Detroit starters on a team with a majors-worst batting average of .1995.

Taillon (1-2) allowed one run, three hits and struck out eight over five innings. The Yankees had lost in each of his four previous starts.

Taillon’s previous win came on May 1, 2019, for Pittsburgh in his last outing before having his second Tommy John surgery. The Pirates traded him to the Yankees before this season.

Doubts over whether he would notch another victory in his ledger entered the mind of the 29-year-old, who underwent his first Tommy John surgery in April 2014 and had testicular cancer surgery on May 8, 2017.

“There were times when I wasn’t 100 percent sure whether I would be back in a big league uniform, let alone be on a team like the Yankees and contribute to wins throughout the year,” Taillon said. “So, it’s definitely meaningful. There’s a lot of people that played part in it to get me back to this point.”

Spencer Turnbull (1-2) gave up four runs and five hits in five innings. The Tigers lost their fourth in a row and dropped to an M.L.B.-worst 8-20.

“It’s almost frustrating,” he said. “I almost did a good job today and then I didn’t. So, it cost us. I finish the game the way I should have, we probably end up winning. So, that one is on me.”

Judge followed Friday night’s two-homer, five-R.B.I. performance by breaking a 1-all tie in the fifth inning with a line drive double off Turnbull to left field that scored D.J. LeMahieu.

The Yankees right fielder awarded Taillon the team’s wrestling belt, which is given to the player of the game.

“It was a special moment. Whenever you have a big injury like that, Tommy John, I know it probably creeps in the back of some guys’ mind that, ‘This might be the last time I throw. What’s my career going to look like?’” Judge said. “But he’s a guy that through it all stayed positive and continued to work, work, work, and it’s really showing right now.”

Turnbull lost control in the sixth inning when he hit Aaron Hicks to open the frame and then walked Gary Sánchez and Clint Frazier before reliever José Cisnero replaced him.

Cisnero retired Brett Gardner on a pop out and struck out LeMahieu. Judge fell behind 0-1 in the count and drove the following pitch to right field for a two-run single that made it 4-1. Rougned Odor then walked and Torres’ two-run single chased Cisnero.

“I’m sure it was emotional for him. Got the belt today,” Yankees manager Aaron Boone said. “So, I am really excited for him and happy for him. I think everybody’s been through stuff. J-Mo’s certainly been through his share of trials throughout his career. To get back to this point, contributing to this team, really happy for him today, but it’s another good step forward for him.”