INDIANAPOLIS — When the ball was thrown up for Florida and Virginia Tech at just past noon, so began in earnest an N.C.A.A. men’s tournament that is certain to be unique. The squeaks of sneakers, the fierce competitiveness of a survive-and-advance competition and the March Madness-branded basketball court were familiar, but little else was as 16 games in six venues in and around Indianapolis were to be played on Friday.

The atmosphere was as extraordinary as the efforts undertaken to put on a 68-team, 19-day tournament during a pandemic that in its nascent stage last March wiped out the N.C.A.A.’s nearly $1 billion cash cow.

Vast arenas — like the football stadium where the N.F.L.’s Colts play — or quaint venues like historic Hinkle Fieldhouse or Farmers Coliseum on the Indiana State Fairgrounds were occupied by only a small fraction of their capacity. 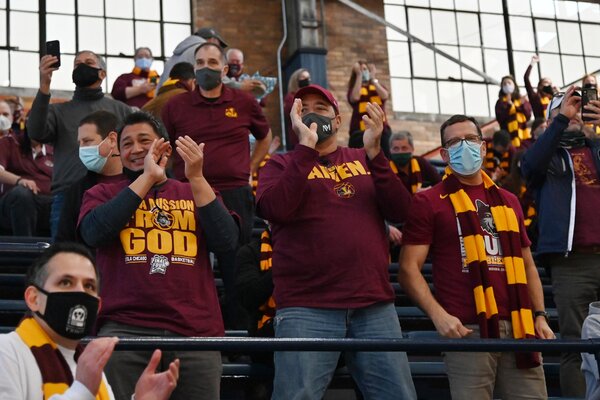 There were neither bands nor cheerleaders, giving most games an ambience of an A.A.U. summer tournament where the stands are filled mostly by parents and hard-core fans.

Without the roar of the crowd to spur them on, players often could only turn to their competitive juices for a jolt of inspiration. And thrilling moments — like a late 3-pointer by Virginia Tech’s Nahiem Alleyne that forced overtime — were mostly muted in person without the usual soundtrack of a crowd’s throaty roar.

A number of teams — Georgia Tech, Kansas and Oklahoma — were without key players this weekend after they tested positive for the virus. And Virginia, which is scheduled to open the tournament on Saturday, is not even certain to play after spending the last week in quarantine after dropping out of the Atlantic Coast Conference tournament because of an outbreak. The team flew to Indianapolis on Friday.

Ohio State, the second seed from the South region, was knocked out not by the virus, but by upstart Oral Roberts, which stunned the Buckeyes, 75-72, in overtime for the first upset of what is shaping up to be a turbulent tournament, on and off the court.

Not long after that, Oregon State, the 12th seed in the Midwest region, upset Tennessee by 70-56. It was Oregon State’s first tournament win since 1982.

“Everything is unusual about it until you get on the floor,” said Lucas Williamson, a senior guard at Loyola-Chicago, whose players were thankful to play before some of their fans, who drove down from Chicago, for the first time this season. “Once you’re on the court, you’re just playing basketball.”

Chaos on the court would be a welcome distraction for the N.C.A.A. Its president, Mark Emmert, and the organization have been under attack in recent days by the players, who have been quarantined, tested daily and isolated in hotels for nearly a week before taking center stage.

Just as one tempest — a social media campaign urging the N.C.A.A. to grant athletes the right to profit off their fame — began to simmer down on Thursday, another one cropped up: the unequal treatment of women after an Oregon player, Sedona Prince, posted on social media a video of a few dumbbells that constituted the workout area for women’s teams at their tournament, which is to begin Sunday in Texas.

Then on Friday came news that while the men were administered polymerase chain reaction tests for the coronavirus, the women were given the less reliable antigen tests.

Even before all that, six referees were sent home for violating virus protocols by having dinner together.

In an interview with a small group of reporters on Friday at Hinkle Fieldhouse, Emmert defended the difference in tests, saying they were administered through local medical facilities that had worked at N.C.A.A. events and had been approved by the N.C.A.A.’s medical advisory board. He called the inadequate women’s workout room “inexcusable.”

Emmert said that he supported players using their voices or gestures — such as several Colgate and Drexel players who dropped to a knee for the national anthem before their games — and that some expressions, which players have hinted would be forthcoming, might be tolerated even if they are against N.C.A.A. rules.

But there would be limits.

“When does it start to disrupt other people?” said Emmert, who plans to visit the women’s tournament in Texas on Tuesday. “If somebody is doing something that inherently creates a situation where another team or teammates can’t participate in a way that makes sense, then it’s a problem.”

In downtown Indianapolis on Friday morning, fans who did travel here wandered the streets — many with their mask on their chin — for a tournament that in normal times would have left the downtown district teeming with people. As Arkansas fans began to trickle into Bankers Life Fieldhouse, the home of the N.B.A.’s Pacers, they began to congregate in pods.

After the cancellation of last year’s tournament, some could not bear the thought of missing out on another — among them Sister Jean Dolores Schmidt, the 101-year-old vaccinated nun who was Loyola-Chicago’s talisman on the way to the Final Four in 2018. She watched from her wheelchair in a corner of Hinkle Fieldhouse, the first time she had seen her Ramblers in person this season, as they advanced with a win over Georgia Tech.

Cathy Work, a 53-year-old Virginia Tech fan from Lynchburg, Va., could relate. After triple-bypass surgery 11 years ago, she pledged to live life to the fullest and was buoyed by a sense of camaraderie with other Hokies fans.

“I don’t want to live in fear,” she said as a mask kept creeping off her nose.

Instead of games stacked on top of each other — normally teams are lined up in the tunnel waiting to take the court as soon as the preceding teams have cleared it — there was a 30-minute gap between contests so the benches could be disinfected by at least a dozen workers wearing clear-tub backpacks of sanitizing spray that was dispensed through hoses to douse the seats.

Teams did not really have benches, but a series of 34 chairs spaced out in a grid to accommodate the members of each team’s travel party, who have undergone daily testing for at least a week and will continue to do so until the team is eliminated. Broadcasters at Hinkle sat alone, across the court from the scorer’s table with 20 rows of empty seats behind them.

“The energy is not the same,” said Sharron Mack, who came from Gainesville, Fla., and is a close friend of a Florida player. “Less fans, less energy.”

She added of the pandemic: “A lot of people are afraid to be out and enjoy themselves. If you come to a tournament like this, you go for the pleasure of it. This prohibits a lot of that.”

For at least one game, though, the atmosphere changed markedly, when an energetic group of Georgia Tech students were on their feet for tipoff, doing their best to inspire their team, whose best player, the A.C.C. player of the year Moses Wright, had tested positive. (A teammate, Jose Alvarado, wore Wright’s number.) The students chanted, “Let’s go, Jackets,” drawing a finger point of approval from a Tech player during warm-ups.

It was a heartening gesture, a moment of connection between players and fans, one that for this tournament is sure to be diminished, if it exists at all.